The following story is the first installment in a new series from Transition US,  called “10 Stories of Transition in the US.” Throughout 2018, to celebrate the 10th anniversary of the Transition Movement in the United States, they have been exploring 10 diverse and resilient Transition projects from all over the country, in the hope that they will inspire us all to take similar actions in our local communities.  The project was in part inspired by the 21 Stories of Transition, and forms a wonderful addition to our story collections from across the Transition movement. 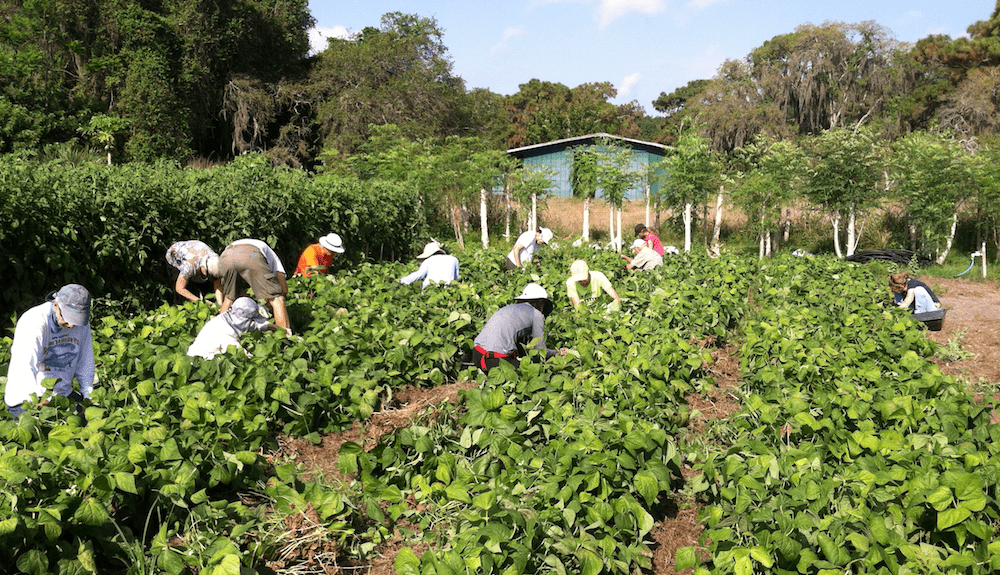 In his Transition Handbook, Transition Movement founder Rob Hopkins stated that, “Food is the most sensible place to begin rebuilding community resilience, but building materials, fabrics, timber, energy and currencies follow soon after.” To best address the steps toward resilience the Transition Movement has made in the United States over the last ten years, it seems sensible to start with a project that has contributed roughly a quarter-million pounds of organic fruits and vegetables to food insecure families since its inception in 2010. In making the transition to a world where no one is food-deficient, Transition Sarasota’s Suncoast Gleaning Project is guiding the way by enacting a tradition that dates back millennia.

It is estimated that 40-50 percent of all produce in the US is thrown away. In a nation where one in six go hungry every year, nearly 60 million tons of food is wasted, becoming the largest contributor to our already overstuffed landfills. On a global level, the United Nations Food and Agriculture Organization estimates that a third of all food is lost or wasted, worth approximately $3 trillion.

In Sarasota, Florida, a movement has started to curb that wastefulness.

“I had previously facilitated a gleaning outing for Transition Colorado, and was inspired by seeing what a big difference a small group of volunteers could make in just a few hours by harvesting produce that would otherwise go to waste,” says project founder Don Hall. “When I moved back to Sarasota, I already had a strong relationship with Jessica’s Organic Farm and knew that there was a lot of surplus produce that could be gleaned there on a regular basis.”

The practice of gleaning has occurred in a variety of cultures and traditions. The custom can be found in several passages of the Old Testament, encouraging harvesters to leave the edges of the field and what is dropped during the harvest for the poor, the fatherless, widows, and foreigners. To not do so was a punishable offense among the Hebrews. 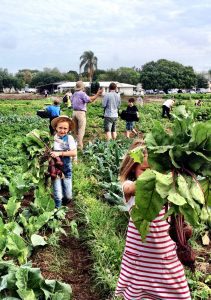 Transition Sarasota has taken a more active approach with the Suncoast Gleaning Project. Instead of merely leaving surplus produce for the less fortunate to collect themselves, volunteers meet at Jessica’s Organic Farm every Monday morning to gather up what the farm cannot sell, and deliver it to All Faiths Food Bank, which then distributes it to those in need through a network of hundreds of agency partners. With a growing season that runs from October to May, this results in tens of thousands of pounds of fresh, organic food being disbursed throughout the community every year.

In an area with so many food deserts, places where there is little access to fresh, affordable foods, this endeavor makes quite a difference.

According to research by the Healthy Food Access project, a collaboration between the Manatee and Sarasota County health departments, only 27 percent of Sarasota County residents live within a half-mile of a healthy food retailer. The USDA estimates that as many as 23 million Americans, including about 6.5 million children, live in the low-income urban and rural neighborhoods, leaving them without access to quality, nutritious foods.

“Over the years, I realized that not everyone has access to, or knowledge of what good food really is,” says current project coordinator Allyson BeCraft. “In North Carolina, I volunteered on a farm every Friday in the summer, and I’ll never forget the first time I harvested a carrot, dusted it off, and ate it right there in the field. It was the most carrot-y carrot I had ever tasted. I brought carrots with my lunch that day, and when I ate them, it didn’t seem like they had any flavor (compared to the ones fresh from the field). Since that moment it has become very important to me to support my local farmer and try to know where my food comes from.”

Beyond providing meals for the food insecure, one of the additional benefits for volunteer gleaners is getting to take home a shopping bag full of fresh produce for themselves. There is indeed a certain amount of joy that comes from eating a salad for lunch that was growing in a field only a short while before.

"Many gleaners come out every week," says BeCraft. "They get to be outside and have some physical activity, but I think the best part is the face-to-face connections people make."

All are welcome to volunteer, which means that each week, children, seniors, and every age in between gather in the fields to glean the harvest together. For anyone who is unable to walk the five-acre farm, they can help wash and box the produce for shipment to the food bank.

“There is something magical about the cool, wet ground underfoot, and the warm, dry sun overhead,” BeCraft says. “Being so immersed in nature right around the corner from your house. So many plants at various stages of their life and so many varieties to learn about. Gleaners get to meet new people and spend time with old friends every week. They educate each other about the harvesting process and pass around recipes for using the crops from the farm.”

The annual start to the gleaning season has also come to coincide with one of Transition Sarasota’s other food-based initiatives, Eat Local Week, which includes farm tours, farm-to-table dinners, film screenings, keynote speakers, and other community events. 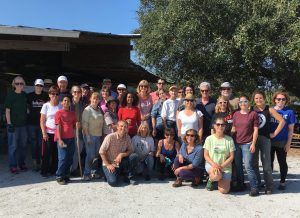 “It clearly demonstrates the power of local food to address significant issues (such as hunger and malnutrition) within your local community,” says Hall, who was the founder of Transition Sarasota and currently serves as co-director of Transition US. “Gleaning can serve as a gateway to the local food movement in general, and local food is perhaps the most effective and accessible gateway to Transition.”

All who describe the Suncoast Gleaning Project highlight it as a win-win scenario. Those in need receive an option for healthier eating. Local farmers receive a tax-deduction for contributing. And, of course, volunteers have a great experience, get to help people in their community, and take home a bag of the freshest produce possible. Even the produce unfit for human consumption is taken home by gleaners with animals like chickens, goats, and pigs to ensure that nothing is wasted.

In recent years, the ripple effects of the Suncoast Gleaning Project have spread far beyond those it immediately serves. Based on the success of this project, the Florida Department of Agriculture is currently organizing a pilot program to launch gleaning projects in six Florida counties, and All Faiths Food Bank has dramatically expanded its sourcing and distribution of fresh produce.

While there are a number of other gleaning projects already operating throughout the country, Transition Sarasota would like to see more develop in other communities.

“This project is highly replicable, deeply rewarding, and easy to support,” says Hall, “but you can’t do it alone. Only in partnership with countless organizations and individuals will your gleaning project thrive.”

Transition Sarasota’s Suncoast Gleaning Project has partnered with many organizations over the years, including the Peace Education and Action Center, the Rotary Club of Sarasota, the Food Bank of Manatee, King Family Farms, Geraldson Community Farm, New College of Sarasota, Honeyside Farms, the Mangrove School of Sarasota, and the Junior League of Sarasota. Hall stresses the importance of building these kinds of relationships with local farmers, food banks, and soup kitchens, as well as educating the community about the importance of local food.

“Through gleaning and other local food efforts, we are rebuilding the foundation for a truly sustainable and regenerative society,” says Hall, “and this kind of radical change-making has never tasted so sweet.”

3. Happy gleaners at the end of a morning’s work. Photo by Paul Murphy