Here’s a lovely piece by Ian Wild, a celebration of a project very close to my heart…

Can this cockpit hold the vasty fields of France?

Or may we cram within this wooden O

the very casques that did affright the air at Agincourt?

Around the turn of the millennium, my wife Belinda was invited to run a theatre course for adults at Kinsale College. John Thuillier, the then Principal, was an educational visionary who had already set up the best Outdoor Education Course in the country and an arts faculty that was refreshing and different. We were allowed to design a fun, exciting and practical training where students could experiment with acting in a free and uninhibited way. It was quite unlike any other professional drama training in Ireland or any of the headbound University courses.

One early difficulty for the course though, was a theatre. We didn’t have one. Though, back then, we had three light and airy rooms for rehearsals, when it came to performing our productions, we had to move house – pack everything into a lorry and tumble into the Town Hall, or a venue in Cork. Building our own theatre, never seemed an option. Who thinks like that? Well, Rob Hopkins did, fortunately for us.

Once a drama training had been established, a permaculture course was next to take root in Kinsale college. As it was the only such course on the planet, people came from all over the wide world to join it. The numbers overwhelmed. Permaculture aims to create a more sustainable way of living with the earth. It emphasises the provision of local needs with the least destruction to the world and its resources possible. 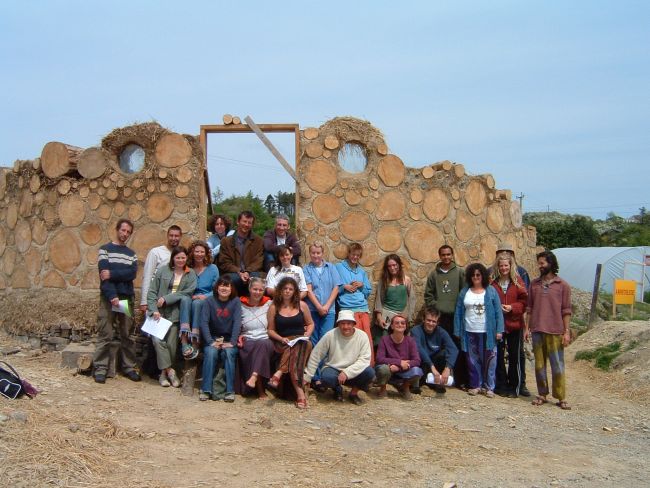 Rob Hopkins, (leader of the course) was interested in his students serving the college community and asked Belinda what the drama course needed. Only a theatre, she said. And so the idea of a mini-Shakespeare’s Globe, made from natural building materials and sitting in the grounds of Kinsale College, was born. Rob and Belinda were, of course, both quite mad.

Why the Globe? Partly because the sort of natural building techniques that the Permaculture students were using were common in Shakespeare’s day, and also because Belinda has this slight infatuation with a man from Stratford – though not the Shakespeare of set texts in the junior and leaving certs. There is a very different Shakespeare to that ghastly fellow, and people mostly love him when they meet him. Although Belinda was interested in all aspects of theatre, mime, clowning, tragedy, masks – she had just been to see the Globe in London and was fired up about creating a smaller version on the college grounds with Rob and the permaculture hordes. 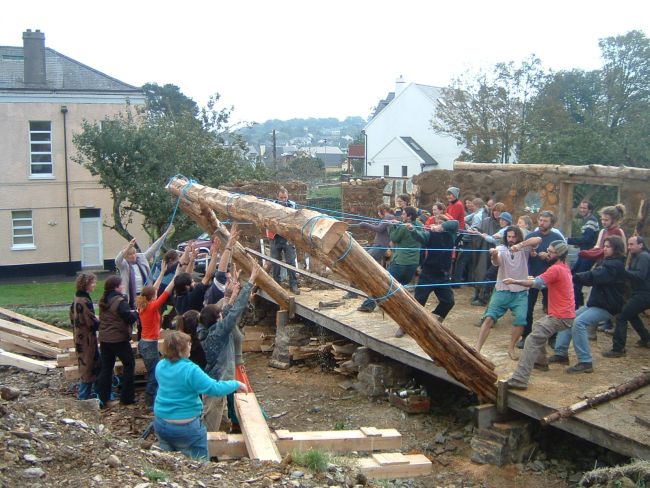 And so, with plans drawn (literally) on the back of an envelope, Rob set to work with a team of Permies (as they were affectionately known) and in a matter of months raised an odd-looking, but strangely attractive stage (a theatre that Bilbo Baggins might act on and not seem out of place). It was made out of cob (straw and mud) with wood frames.

Colossal cedar beams held up the turf roof. With a view to practicality, I was at first perturbed at my wife’s eagerness to stage a large end-of-term play in a theatre so completely open to the elements. Any actor, stepping onto the apron of the stage in a downpour would have been immediately drenched. And as for the audience … well, there were no walls and no roof for the groundlings, or any spectator. There were benches in a semi-circle that formed, with the rest of the theatre, a large ‘O’.

But protection from the ravages of nature? There was none. And in Ireland, if I might import a quote, ‘the rain it raineth every day’. Or at least, sometimes it seems so. For some reason, this didn’t seem to overly concern Rob or Belinda. Faith, I dare say, wears no mackintosh.

It was however, a tremendous achievement to get a performance space ready for the end of term play, the Merry Wives of Windsor. We rehearsed in this open air arena, like ancient Greeks but without their blue skies and dusty olive groves. It wasn’t until the show went on that I realised that the amphitheatre was something out of the ordinary. The play electrified the audience. Of course, it is a great play, and the actors excelled. But there was more to it than that. 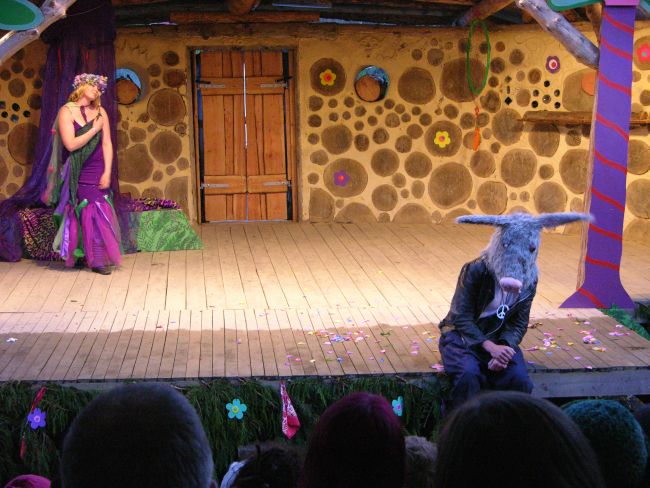 That first spring – in early May, the weather held all week. The air was a little refrigerated. I was playing mandolin in musical accompaniment to the play and my fingers once went a funny blue colour. It was something though, to watch Falstaff’s antics with an awareness of a starry infinity overhead. We all realised, the permaculture students had raised something rare and unique. [Here‘s a piece from RTE Television at the time]

Alas, Rob Hopkins left for England before the amphitheatre went much further. But not before starting the Transition Town movement (now an international phenomenon) in Kinsale, from the college. The baton was taken up by lecturer Graham Strouts, with assistance from Paul O’Flynn, and gradually, year on year, the amphitheatre has been improved and enlarged by diligent permaculture students. Walls grew and backs appeared for the benches. But most difficult of all, was the provision of a roof for the audience. We knew our meteorological luck couldn’t hold out forever; but how could we prop up canopy across the wide auditorium? 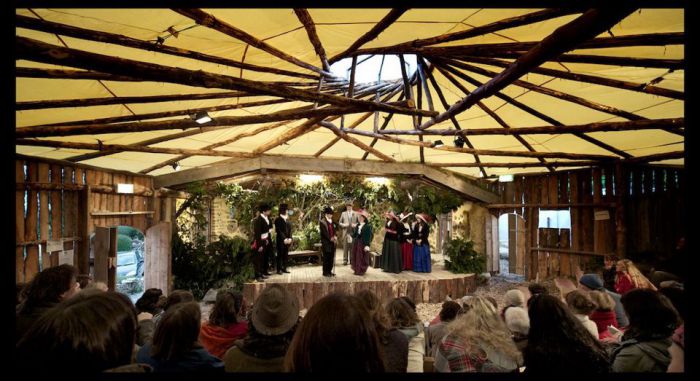 Nobody wanted great pillars obscuring the spectacle of a play. Eventually, Christie Collard from Future Forests arrived and designed a reciprocal roof: impossible Escher-like cross struts which suspended a roof above the audience like a conjuring trick. Christie’s experience with natural building, meant that he shaped structures entirely in keeping with the beautiful and idiosyncratic appearance of the theatre. Travel where you will, there is nothing like it. It is pretty and unusual as Elizabethan architecture was, because, as with buildings constructed back then, the amphitheatre has grown organically. 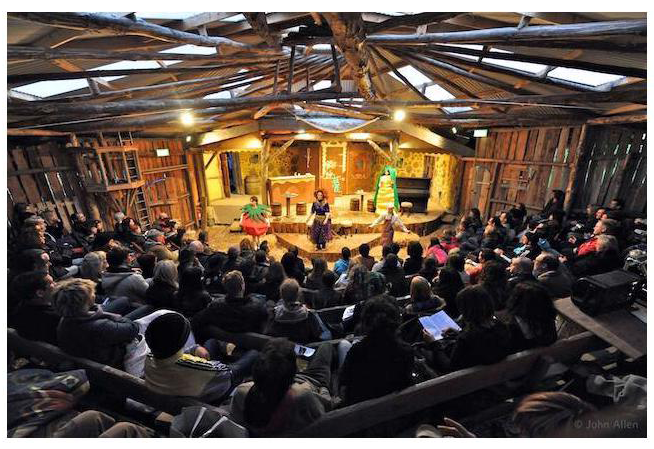 Instead of the prefabricated square and rectangular monstrosities that modern architects inflict upon the landscape, this wooden O is human. The grass roof is a little prairie on the house. Throughout, the theatre is an arcadia of trunks and beams. The place seems to have a sense of humour and is full of inbuilt jokes, the windows being made from recycled portholes of washing machines. In a world that is becoming increasingly regulated and conformist, it is part throwback, partly a dream of the future. One could almost say, the amphitheatre is a physical embodiment of the spirit of the drama course it serves. Always growing, always different, always human, busily creative and comedic. 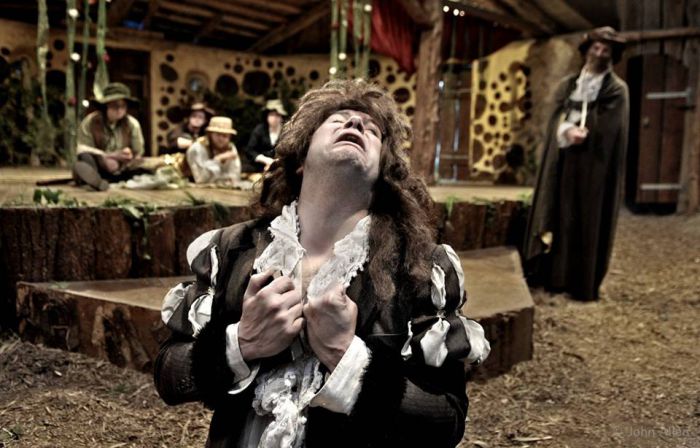 For many years, hardened amphitheatre devotees sat on hard seats and braved the chill of evenings in early May by arriving with cushions and even sleeping bags. Those days, for good and bad, are pretty much gone. The Auditorium is soon to get a thorough draughtproofing and stuffed seats. It’s not centrally heated, but on a May evening, there is no longer any danger of blue fingers or toes. I like to think that it’s the sort of place Shakespeare’s ghost visits now and then. Arriving unseen through the thick walls, seating himself at the back and enjoying plays – all manner of plays – even his own, in one of the most intimate and thrilling auditoriums a person could ever visit.

Here is a beautiful new website about both the theatre and the drama course at Kinsale.