I went to a conference once where at the beginning of each day, for the first 10 minutes, people were invited to share any dreams they had had the previous night.  The thinking went something along the lines that when a large group of people spend time together, their dreams may often resonate or provide insights for other members of the group.  Or something.

Every morning we’d hear a few dreams.  I rather enjoyed it.  A few nights ago, I went to sleep thinking about scaling up, as I was thinking about what to write for Monday’s opening blog on the subject.  That night I had a curious dream which I can’t make heads nor tail of, so in the spirit of that conference, I thought I would share it with you.

I dreamt that myself and a few other people had a seemingly great idea to help Transition scale up, which was to reintroduce football (or soccer for US readers) in the way it was originally played in medieval times.  That early version is described thus: 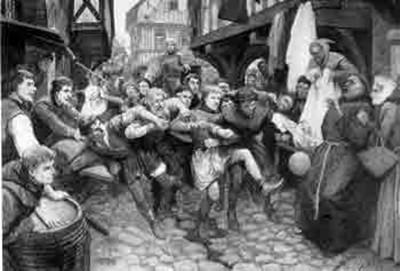 It was also known as “mob football”, and often took the form of a near-riot.  According to some accounts, any means could be used to move the ball to a goal, so long as it did not involve murder or manslaughter.

Football was actually banned between 1324 and 1667, a ban covered by over 30 royal and local laws.  Yet repeated legislation failed to stamp it out.  King Edward II was so disturbed by it that in 1314 he issued a proclamation stating:

“Forasmuch as there is great noise in the city caused by hustling over large balls from which many evils may arise which God forbid; we command and forbid, on behalf of the King, on pain of imprisonment, such game to be used in the city in the future.” 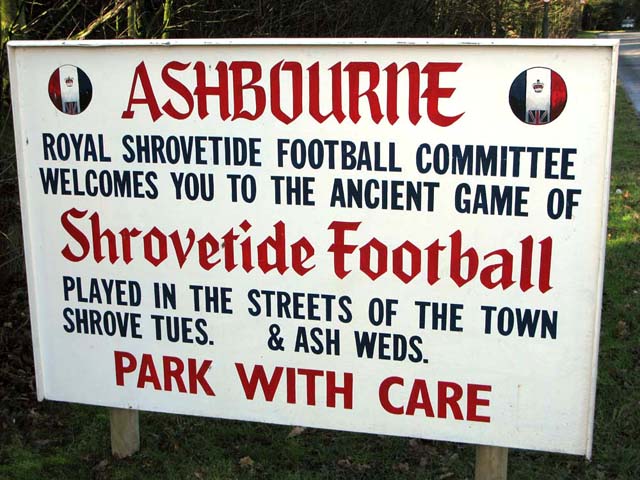 The game has actually had something of a modern revival.  In Ashbourne, Derbyshire, the game is played every Shrove Tuesday and Ash Wednesday, during which time, apparently, “Ashbourne becomes a war zone”.  In Alnwick in Northumberland their version, called ‘Scoring the Hales’ survives and is kicked off (so to speak) with the Duke of Northumberland dropping a ball from the battlements of Alnwick Castle.  It is still played in several other places too, and has only stopped being played in several other places relatively recently.  In Teddington, where it no longer happens, “it was conducted with such animation that careful house-holders had to protect their windows with hurdles and bushes”.  Here is a short video giving a sense of what it looks like when it’s played in Alnwick:

So anyway, back to my dream.  So we had this idea that reintroducing mob football through Transition initiatives could be a great way of giving Transition a boost.  We trialled it first in a few small places and it went really well, people really enjoyed it, it proved to be a real community celebration and brought people together.  My thinking was that communities need the opportunity to come together and let their hair down and go a bit wild, like the Pamplona bull run, that festival in Spain where everyone throws tomatoes at each other, Brazilian carnivals, or Holi festival in India where everyone chucks coloured powder at each other.

In my dream though, suddenly the idea really took off.  It started happening all over the country, but it rapidly got out of hand.  People come to associate Transition with mob violence, people looting shops while the ‘mob’ is passing through a shopping area, and before long, Transition is associated with civil disorder and chaos.  The dream ended with a sense of deep anxiety about what we had unleashed.  No idea what that’s all about. Any suggestions welcome.  Or maybe I just ate some particularly strong cheese before I went to bed!