Ecopoetry goes several steps further than traditional nature poetry by recognising the interdependence of all life on earth and the irresponsibility of our attempts to tame and plunder nature in a modern world ruled by technology, self-interest and economic power.

Since the onset of my involvement with Transition, one of the very first and most enduring problems has been the absorbing task of communicating, in a compelling fashion, both the reasons and the need for transitioning and motivating others to take constructive action. In presenting people with the truth as Transition sees it, words, however revolutionary their message, should never be minced: this has always been my belief. Others have disagreed with this view on the basis that a blunt delivery might lose us more friends and activists than we could ever hope to gain. Why should people stick with us, when all that we appear to be offering is an energy-poor, climate disaster-rich future of universal belt-tightening, shrinking frontiers, home insulation and sandbagged doorsteps? How to re-instil that simple sense of community, which for millennia has endlessly sustained the human race, before global hubris took hold?

Let’s wind the Transition clock back to early spring 2010. Leytonstone  had kicked off in September 2009 with a screening of The Power of Community. After several months of film screenings and meetings, we had succeeded in attracting a few dozen like-minded individuals, but we still hadn’t caused any obvious sparks to fly, at least as far as I was concerned. Something was lacking in our attempts to engage the local community: something bigger, more inspirational than our film screenings, ideas banks, practical action and, of course, our permanently overflowing reservoir of climate and energy facts and statistics…

What was required was an overarching, compelling artistic and cultural expression of Transition which would motivate others in a way that no amount of practical workshops could ever aspire to. A poeticisation of disaster? Nothing less would do. 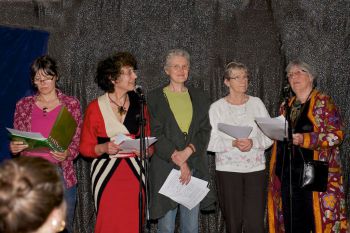 For our first performance, we shied away from making use of our own poetic offerings, creating a programme which relied heavily on input from: EarthShattering, a rigorously selected anthology of ecopoetry, edited by Neil Astley, which in my opinion, has never been bettered and is unlikely to be. Earth Shattering is a sharp and effective tool for environmental campaigners in the English-speaking world. The book spans the centuries and the continents, demonstrating quite clearly that, where human-wrought planetary devastation is concerned, there have always been souls endowed with the gift of foresight. Very few have heard their message, still less have heeded it. Jonathon Porritt sums it up here: ‘As our world’s politicians and corporations orchestrate our headlong rush towards Eco-Armageddon, poetry may seem like a hopeless gesture. But Earth Shattering shows that the power of poetry is in the detail, in the force of each individual poem, in every poem’s effect on every reader. And anyone whose resolve is stirred will strengthen the collective call for change.’

One of the poems that we performed at our debut event, and still regularly perform, is Darwin Cyclone, written by Astley himself. It is a response to having survived, at the age of 21, the terrible experience of Cyclone Tracy which laid waste to the city of Darwin, Australia, on Christmas Day 1974 – and evidence that his talents as an editor are more than matched by his evocative abilities. In December 1974, Astley, based at  his brother David’s house in Darwin, was working as sub-editor on the Northern Territory News. When Tracy struck on December 25th, no one was prepared for it – warnings had come and gone before, with the storms always veering away from their anticipated target at the last minute. A false sense of security prevailed. Christmas cyclone? No way!!

In fact, although loss of life was relatively low (71 dead) for a town of around 45,000 inhabitants, Darwin itself was totally wiped off the map, with over 80% of its housing stock flattened. The storm lasted from midnight on Christmas Eve until dawn. One can only estimate that the most powerful gusts were around 185mph, as all the gauges had been broken. It still holds the official record as the worst natural disaster in Australian history. 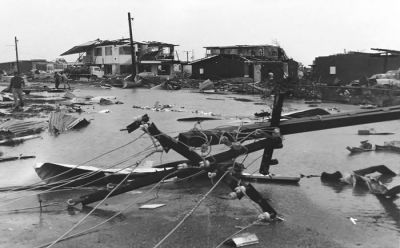 In Astley’s own words: “On Christmas Day, 1974, Darwin was destroyed by Cyclone Tracy. I was trapped under a collapsed house. This brush with death was enough to send me post haste to Newcastle, where I was soon working as a bus conductor while waiting to start my course.” 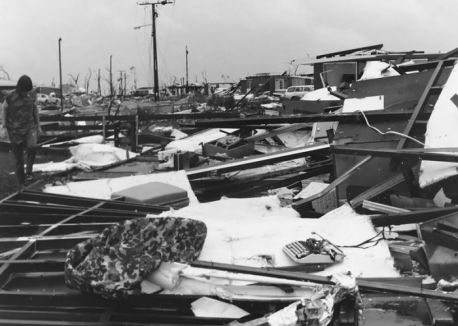 On the left, Neil Astley surveying the ruins of his brother’s house. Note the portable typewriter in the foreground.

After graduating in 1978 with a 1st in English, he immediately set up Bloodaxe Books in his bedroom – persevering for seven years until it could finally pay him a wage. It is now a firmly established and fiercely independent poets’ publishing house.

the radio, and all the lights had gone.

We weren’t aware of what was going on,

But watched an apparition: trees possessed

and shaking, frenzied, thrashing in the night;

watched water seeping in, creeping across

something hit the house, somewhere out of sight.

I felt the window strain and heave behind

my hand, stepped back the moment when it groaned

its shrillest note, and burst before I’d turned

the corner, running to my room to find

the wind already in the corridor.

Some flying curtains slashed me in the face.

We grabbed a mattress, shook off all the glass

and wedging it against the bathroom door

dived after it, just as a rafter broke

through, showering bricks and plasterboard on top.

around us in the dark. We didn’t speak.

The house was being torn apart with us

inside, each wall the wind was breaking down

the firing squad which faced us for six hours.

We didn’t crack. The darkness screamed and roared.

They wouldn’t shoot. I knew if we survived

I’d not want anything. Being alive

was all I thought about, until they fired…

A crack of light at dawn. The noise died down,

replaced by belting rain. Who looked out first

I don’t remember, only that I raised

my head up warily. And saw. As when

someone emerges after an air raid

not knowing whether neighbours have been spared,

so I climbed up all innocent, and stared

at what I’d never thought I’d see outside:

a silent film of houses smashed to bits –

and streets away. in flickering rain, someone

staggering from the ruins in slow motion

(an insect crawling from its chrysalis).

The rows of trees had been stripped bare.

I saw my room had gone. I had no clothes

except the things I wore, I’d lost my shoes,

and spiked my foot before I found a pair.

I hopped about, and should have been in pain

of crying, grinned. Hey look at me, I’ve cut

my bloody foot, I shouted at the rain. 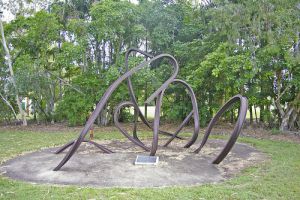 Satellite view of Australia showing the size and path of Cyclone Tracy  – http://emmaacollins.wordpress.com/