This interview is published with thanks to the Institute for European Environmental Policy. It was featured in their November newsletter, Beyond GDP, which is published by the European Commission.

How would you define resilience and which are the factors which influence it?

Resilience is the ability of a system, such as a local economy or community, to withstand shock and then adapt to that shock. It’s the ability to flex, adapt and to change, and think on its feet in any given situation. The twist which we try to put on resilience in the Transition Network is that the ability to react to those threats shouldn’t just be a process to avoid the worst possible outcome, but should be seen as an opportunity to engage with economic development in a positive and creative way. Resilience is an opportunity and a step forward, rather than purely a disaster avoidance strategy.

What vulnerabilities do modern societies face and how can the transition network address those?

Modern societies face a long list of vulnerabilities, whether it is climate change, and the need to keep fossil fuels in the ground, socio-cultural issues such as loneliness, or economic challenges, in terms of an economic model which perpetuates inequalities. It’s important to address these issues at the highest level, but what we try to do is ask: “What can we do here, in this place where we live now?” This brings a slightly different set of vulnerabilities to national development objectives, because you start to talk about what is meaningful or resonates with local people.

One project in Totnes, called ATMOS, is focused on the community led redevelopment of a local factory, which prior to its closure 10 years ago was the largest employer in the area.
It’s about putting the local community in the driving seat, building homes that are genuinely affordable, creating local jobs and spaces for enterprises. Dealing with national issues but linking them up with local ones.  At the local level you can move faster, because you know the place better, you can connect with the right people, you don’t need to wait for endless permissions, and you can just get moving.

There was a project in Black Isle, Scotland, called A million Miles. It used funding from the Scottish government to reduce the amount of car travel by 1 million miles on their peninsula. In three years they managed to reduce it by 1,3 million miles. There was something like 130.000 more miles cycled, 74.000 more miles walked. When I asked them how they it, they replied that they know the place, the people and the culture, the government couldn’t have sent somebody in with a clipboard.

Do you see GDP as a measure of economic development which has been problematic for resilience?

A lot of the things which we need to be become resilient to are the result of a blind pursuit of GDP at the expense of everything else. But in order to develop economic resilience you should focus on developing an economy which works better for everyone.

In Totnes, we developed a Local Economic Blueprint, which looked at four sectors in the local economy (food, retrofitting, renewable energy and health care). We didn’t start with an idea of economic growth, or even de-growth, but rather asked: “what would a new economic story look like?” We placed an emphasis on retaining money and employment in the local economy. Our analysis showed us that in Totnes, we spend GBP 30 million on food, but 22 million of that was being spent in just two supermarkets. We also showed that the supermarkets performed badly on creating local jobs or sourcing food locally compared to independent stores. We concluded that diverting 10% of spending in supermarkets would boost the local economy by GBP 2 million – presenting an economic opportunity for Totnes’ food economy.

How can the resilience of societies be measured? Which data can be used to reveal the vulnerabilities?

Measuring resilience and resilience indicators was a topic I looked at as part of my PhD a few years ago (see Table 1). Elizabeth Cox at the New Economics Foundation (NEF) has also been active on this topic – see NEF report on Financial System Resilience Index. What you soon realise is that as you start mapping it out it becomes increasingly complicated.

In the documentary, Qu’est ce qu’on attend?, you can see how the mayor of the town of Ungersheim, Alsace, has led a range of initiatives; 21 actions for the 21st century, aiming to increase local resilience. Actions included retrofitting streetlights with LEDs, developing a community energy initiative, and setting up a cooperative market garden to supply public institutions with organic food. They have saved 600 tonnes of carbon a year, they spend less public money and they have created jobs. But when you ask people what is it about transition which matters to them, no one mentions the carbon, they say that it’s about feeling part of a community – something very difficult to measure. 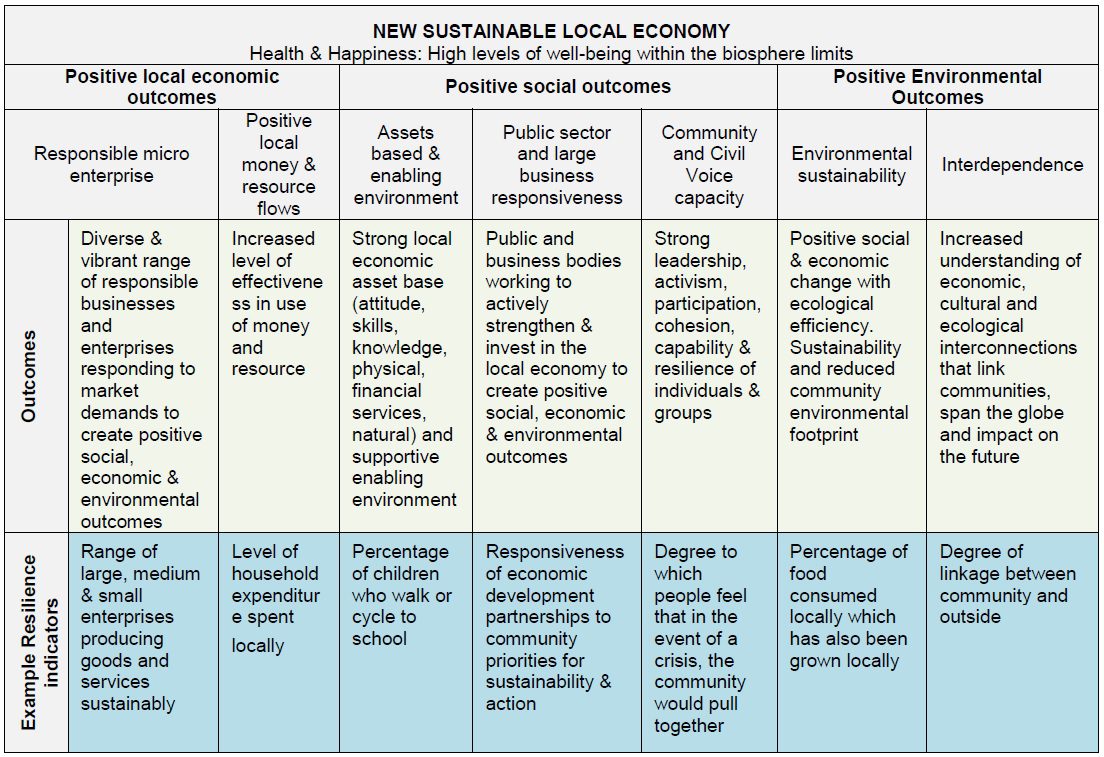 What is your experience in measuring resilience? Can you provide any example of indicators or indices which measure resilience effectively?

As part of my PhD, we did a survey of 300 homes in Totnes to find out what it was about Transition which mattered to them. I concluded that in the event of a crisis I believed Totnes would pull together – there was optimism. Beyond energy, food and tangible elements, a measurement of resilience should try to include these more subtle issues.

In general, people doing Transition projects tend not to measure what they are doing. In the build up to COP21 we carried out a project called 21 Stories for Transition. We asked groups involved in this for simple information number of participants, volunteer hours, how much investment was needed, but many of them didn’t have that data. We’ve worked with the University of Oxford to develop a tool to measure and better understand the transition projects. One of the aims of this work was to identify representative indicators that can be utilized across the Transition and Low Carbon Communities movement to evaluate their collective impact.

Which are the most important challenges to focus on to increase Europe’s resilience?

Climate change is the obvious one. However, one of the key things we need to build resilience to is the impacts of poor policy making. We recently saw in Grenfell Tower, in London, how austerity can be a form of violence – removing local resilience. One of the ways in which many governments have tried to drive growth, is to unfetter property developers, so they can build without regulation, but often properties don’t meet local needs.

In the Caring Town Totnes initiative, we have tried to pool resources in the care sector, so that, in spite of cuts to public budgets, the most vulnerable people in the population have access to care.

Governments have a crucial role to play in mobilising the transition to a new economy. Part of this will be tapping into the buying power of public institutions, including the European Commission. Huge public procurement contracts are often wasted on multinational outsourcing companies, where they could support local sustainable economic development. Take food for instance, the size of public investments in catering could revolutionise urban agriculture and help reconnect farming with cities. If we imagine that the transition on the scale needed is going to be led just by those individuals who choose to buy local and organic food, it’s not going to happen.

In practice, the challenges faced by people look different in different places. In Totnes, we don’t need to be resilient to fracking, because it’s not an issue here. In London, transition groups are putting a big emphasis on conversations to support social integration, as there is a feeling different communities are drifting apart.