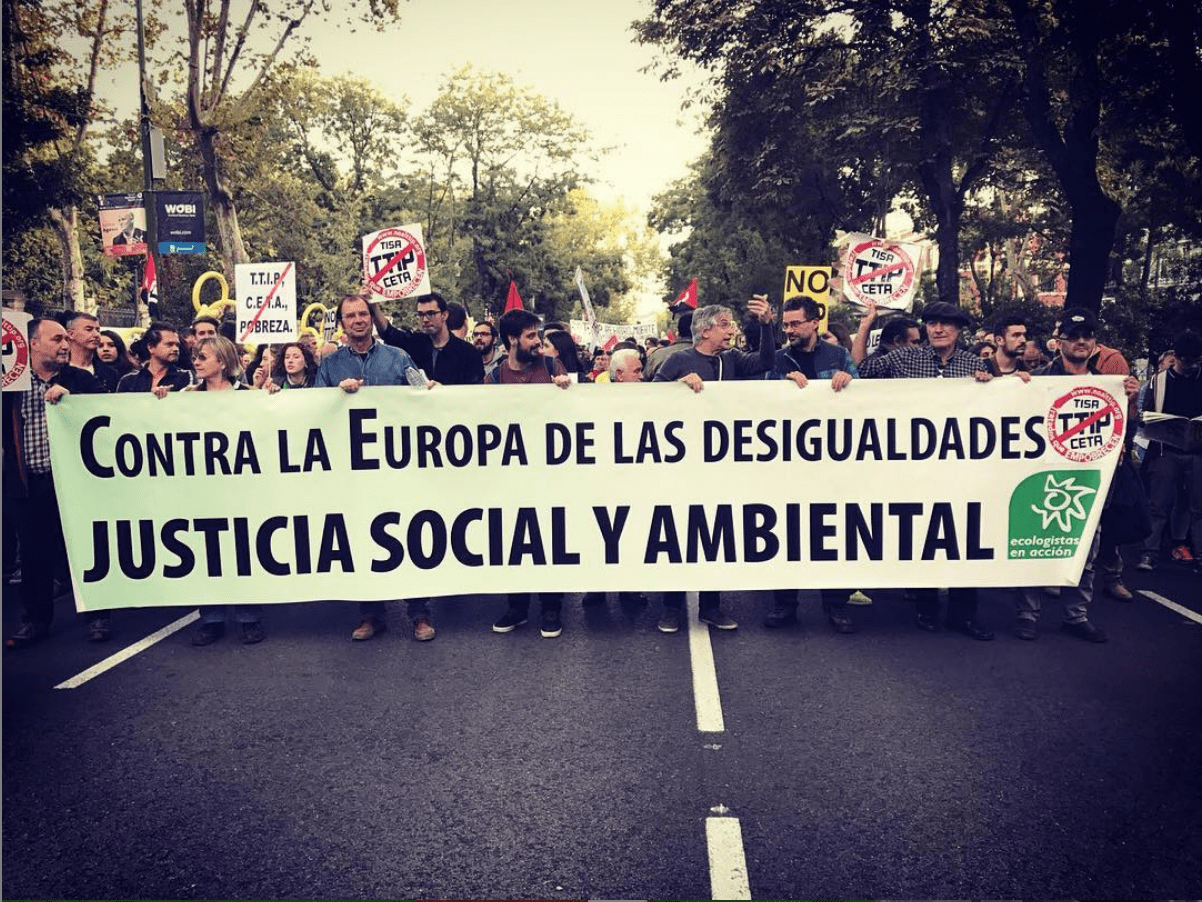 As we reimagine and rebuild our world, how we and work together can be a practice in creating the future. In our ongoing series of Guest Editor blogs from Kevin he hears from Samuel Martín-Sosa about how Ecologistas en Acción‘s model relates to their politics and values.

In December 1998 Spanish ecological networks came together to found Ecologistas en Acción (“Ecologists in Action”) with the goal of creating a common platform to have increased public recognition similar to some of the larger NGOs already operational in Spain. However, its internal working based on direct democracy sets Ecologistas en Acción apart from other large NGOs. It has been highly effective in interfacing with social movements and consequently bringing new people into ecological struggles.

With a stated goal of prioritizing environmental defense within the realm of social ecology, the actions of Ecologistas en Acción include legal intervention, street mobilizations, and awareness campaigns. Their theory-of-change highlights …understanding that environmental problems have at the origin a model of production and consumption that is every day more globalized; the same source of numerous social problems – there is a necessity to transform if we are to avert an ecological crisis.”

I asked Samuel Martín-Sosa, one of the network’s three coordinators, a few questions about the practical functioning of Ecologistas en Acción and how their organizing model relates to their political work.

Kevin: Hello Samuel. Thanks for taking the time to talk to me. In a few words, could you tell us how Ecologistas en Acción (EeA) organizes practically? What structures do you use for decision making and internal communication?

Samuel: No problem. Ecologistas en Acción is a confederation of regional federations. Each regional federation is formed of local groups with around 300 groups all over the country. There is also a team of three coordinators – we do not have one general director in the sense of other NGOs. Beyond organizing around geographical regions, we also organize in thematic areas such as energy, water, transport, biodiversity, etc. Each of these thematic areas is coordinated by 1-3 people who are nominated internally by the area members. The time demand for these roles is very high, so usually people stay in those positions no more than 3-6 years. Anybody from any Ecologistas en Acción group can join whatever area(s) they desire.

Practically, thematic areas meet at least once a year and are constantly coordinated through mailing lists. Thematic area coordinators make part of the executive committee, a joint body comprised of three network coordinators, coordinators of thematic areas (such as water, wastes, energy, biodiversity, etc.), and people with structural roles (such as press and communications officers and international coordinator). The executive committee meets every 15 days and takes operational decisions which can range from buying a new computer camera to formally joining an international campaign. Four times a year, the regional federations meet together with the executive committee. Every 3 years instead of a “General Assembly” we have a Congress because we elect all representatives on that occasion.

Kevin: How are decisions made and proposed?

Samuel: The organization is pretty horizontal and the degree of autonomy of local groups is very high. It is always the groups who decide which activities they want to get involved in and to what extent they want to engage with more strategic campaigns. There is an annual general assembly where organic issues and political positions are decided. Also, there are a couple of national campaigns for the year receiving support at this annual general assembly, but the final decision on whether or not to engage with them belongs to the local groups. The confederation has – just 9 people – to perform all the structural roles such as communications, website, international relationships, coordination, etc. Besides this, there are people hired for particular projects – such as diesel taxation, climate campaigning, and so on. At the regional level, federations, which are economically independent the confederation, may have their own staff of usually just one or two people, but that is not the case for all of them. Most of the activity carried out by Ecologistas en Acción is done on a voluntary basis.

Kevin: How do you deal with salaries for staff?

Samuel: We have a one size fits all policy. Everybody working for earns the same, regardless of if they are dedicated to administrative issues or coordinating campaigns or projects. We are in the process of discussing a protocol on hiring including different criteria and questioning, such as if there should be a limited term for the posts.

Kevin: What do you see as the benefits of such a structure?

Samuel: The activism-based type of activity provides high legitimacy to the work we do as we are not highly professionalized and we have a true and solid social base. We are also close to the problems we work on, although sometimes our decision-making processes may not be as speedy as the real-life political processes often require.

Kevin: Can you give a recent example of how this organizing model has worked well?

Samuel: One example is our anti-mining campaign. Over the years we have become recognized as one of the largest environmental organizations in Spain, which gives us a large microphone and allows us to gain access to discuss certain issues with decision-makers. Because of our small structure we have a strong presence in the local territory which provides us with real cases and legitimacy. Recently we organized a delegation, of frontline groups from different parts of Spain, to Brussels to discuss with the European Commission and the European Parliament about mining policy.

Kevin: How do you think such an organizing model reflects the politics and values of Ecologistas en Acción?

Samuel: The organization in horizontal thematic areas reflect well the horizontality of a movement like ours.

We’d love to hear your thoughts and experiences of styles, what methods you use, and how these reflect the values of your group.

In our ongoing series of blogs from Kevin Buckland, our fina...