I inhale exhaust from thousands of cars on my bike ride through Chicago, past people sleeping on the pavement, under highways clogged with traffic, to make it to my destination – a neighborhood YMCA. In the garden behind it, sunflowers and leafy greens bounce out of raised beds with signs that read ‘Feel free to taste, but leave some for the next person’. A hen coos softly in her coop. A group of women is gathered around a table peeling vegetables, while more women unload a jug of iced hibiscus tea and boxes of toys from a car. More people start streaming in – mamás, tías and abuelas –with children at their sides.

“Buenos días!” greet the embajadoras – Early Learning Ambassadors – to the families who come every week to their Nature Playgroup. Tomorrow they’ll wake up early and do it all over again, but they will meet at a boathouse in a public park.

“We’re like a road show. We don’t have a space, so we use the community." 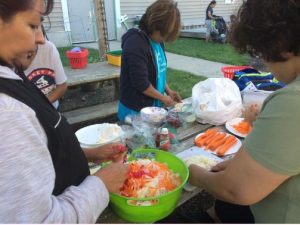 Early Learning Ambassadors make a salad of shredded carrots, beets and jicama. Families eat it sprinkled with chili and lime, and wash it down with agua fresca (homemade hibiscus tea)

Logan Square Neighborhood Association (LSNA), a nonprofit, multi-issue, grassroots organization has earned international acclaim for giving parents leadership roles in schools since 1995. Their Parent Mentors start out assisting in the classroom, and go on to design full-service community schools, offering adult education, childcare, and afterschool classes, reviving a simple principle that we too often forget: schools belong to families.

Four years ago, Lucy drew from that pool of parent mentors to create a new group called Embajadoras de Aprendizaje Temprano – Early Learning Ambassadors. They earn income for 12 hours a week to build community with parents of young children, and they spend long hours in between learning, reflecting, and planning. “Becoming an ambassador changed my life,” says Aleida Arzeta. “I learned to eat better. I’ve learned a lot about health. I’ve learned a lot about how to share, and socialize.” 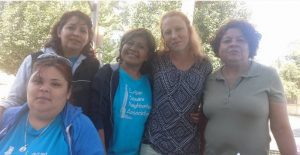 LSNA is steered by principles of popular education, which Lucy describes as “people using their own talents, their own assets, their own interests to learn.” Popular education’s most famous champion is Paulo Freire, who taught adults in rural Brazil not only to read, but to trust their capacity to work together for change. “No one educates anyone else, nor do we educate ourselves,” said Freire. “We educate one another in communion, in the context of living in this world.” 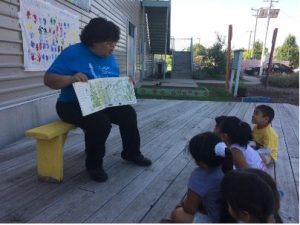 Early Learning Coordinator Delia Bonilla: “That’s right! All these plants are growing,
just like you, Brandon, and you, Sofia, and you…”

Without popular education, LSNA’s nature playgroups might not exist today. Three years ago, the ambassadors were running the parent leadership program Abriendo Puertas and nutrition program Cooking Matters when, during a brainstorm session, Lucy says, “I had them reflect on their own childhoods. I asked them what some of their rich memories were, and they all saw that being outdoors was critical to their development in their native countries. Most of them grew up in rural areas, where there was a lot more freedom.” 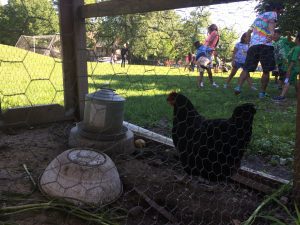 At the YMCA site, older children play social games. From time to time, they run back to greet
the chickens, slip grass through the wire, and bawk back at them.

Thanks to the ambassadors’ reflection on their own childhoods – and plenty of planning and training in outdoor education – the nature playgroups are a success, attracting dozens of families every summer. “My kids have learned so much,” said Imelda, a mother of four. “They used to be afraid of certain plants and insects. They wouldn’t touch them, but now they like them.” 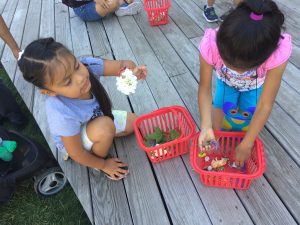 At the YMCA site, children compare findings from a scavenger hunt around a residential block. The ambassadors hide plastic objects in the trees, stimulating the imagination with natural and nature-like objects.

At the McCormick Tribune YMCA that partners with LSNA, families have free range of a community garden, an athletic field, and tables where they prepare food and make art. They also venture onto streets to wave at dogs on leashes and explore nature popping up on Chicago’s little grass lawns. The other playgroup site, Humboldt Park, is a sprawling 207-acre (84 ha) preserve with lagoons, prairie, and formal gardens. It’s harder to do elaborate art projects and food preparation here, but it’s a lush world to explore. 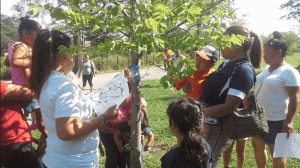 As sunshine glows through green leaves and honeybees buzz inside flowers, I watch the children navigate urban lagoons and prairies, observing geese, rabbits, woodpeckers, and birds galore. A toddler grabs a cigarette butt and uses the ashy end as a crayon on the sidewalk. His mother laughs and gently takes it away, reminding him that he will love the art project that the ambassadors have planned for later today. I don’t even notice the sounds of distant sirens and garbage trucks until I get home and listen to my audio recordings. 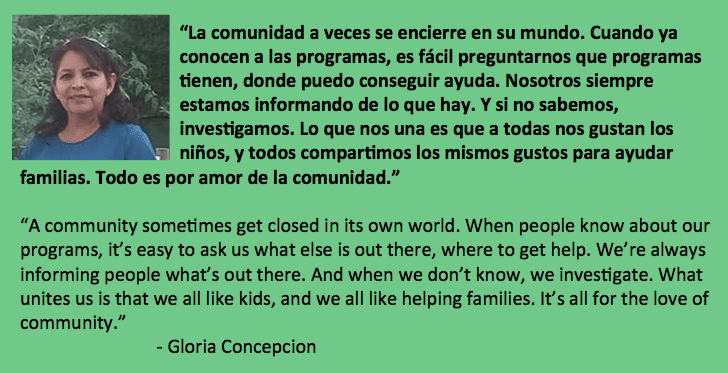 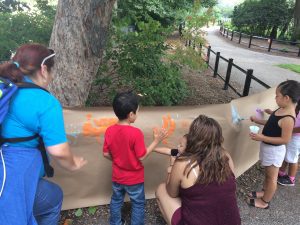 The ambassadors wrap paper around a fence in Humboldt Park for the children to paint.

The children enjoy planned activities – painting, going “fishing” in plastic water bins, making paper bag puppets – as well as plenty of time to roam free, playing tag in the grass, watching ants crawl on their hands, collecting leaves and stones, and exploring with binoculars and magnifying glasses. Unlike kids stuck for long hours indoors, in front of a screen, they’re making meaning of a multi-dimensional world, a world that they have the power to change. 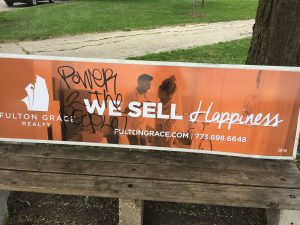 “Power 2 the People!” Graffiti on a real estate ad in Humboldt Park, a neighborhood that has been pushing back for decades against gentrification.

In Logan Square and Humboldt Park, where LSNA’s Early Learning Ambassadors work, gentrification is pushing residents out of neighborhoods that they have spent generations infusing with life and culture. Logan Square alone has lost 19,000 Hispanic residents since 2001. As local anti-gentrification activist Lynda Lopez writes in her blog Define Community, “When someone says our neighborhood is “waiting to be discovered,” let’s make it clear that we’re already there and we don’t need someone Columbusing at our doorstep.” Many early learning ambassadors work overtime on these crucial issues, joining rallies for affordable housing and other actions to make Chicago a better place to live. 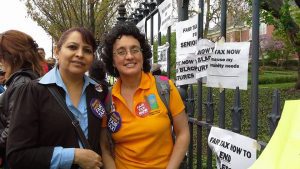 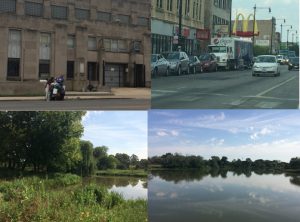 A homeless man in front of a National Guard building, pollution and corporate chains, prairie, wetlands, and oxygen galore. These 4 pictures were taken less than one kilometer apart, in and around Humboldt Park.

“I would like more than anything to have our own space in the community, because we always have to be looking for places to run our programs. I want to run them every day.”

Aleida Arzeta dreams of a community center that would also function as a café and bakery, and a place where families could share social and emotional support. “What I’ve realized from doing these workshops,” she says, “is that moms really need to let out what they have inside them. They need to be able to find people to listen to them about things that are going on with their family.” Imelda, a parent of four, agreed. She wants a place for her kids to go to talk about how to deal with bullying. 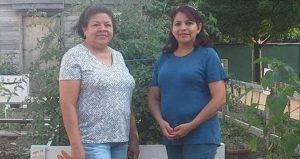 Ambassadors Aleida Arzeta and Gloria Concepcion in the YMCA garden.

Aleida, Gloria and I fantasize about the community center of their dreams. They envision a comprehensive center with education, business, social and health supports all in one – not a place where “experts” would provide “services” to people in need, but a place where real people would support each other, because we are all experts in something, and we all have needs. 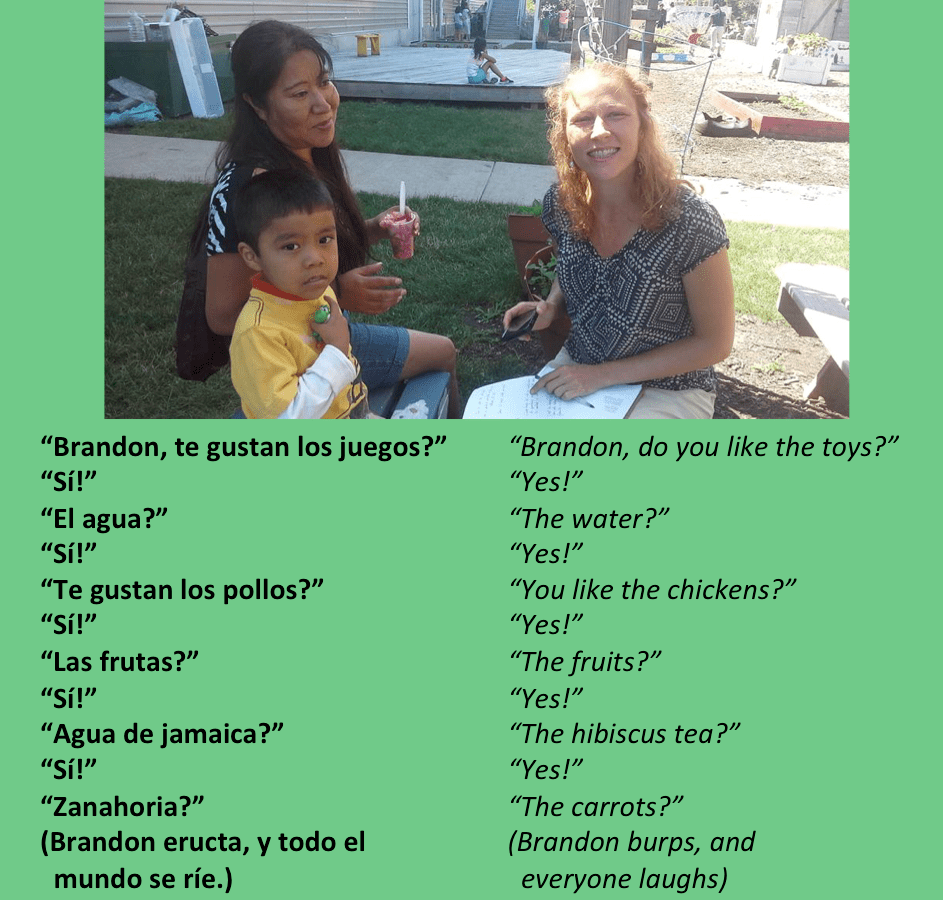 Lucy Gomez-Feliciano says, “I would love to replicate this. An early learning ambassador program can happen in any community. When I think of peer educators, I think of community health workers, and more than just a traditional health worker [who focuses on] diabetes, or breastfeeding. We should also think about quality of life, connecting to nature, and the social-emotional needs of parents. The ambassadors are able to do this work in a much more powerful way than I can do it. If you’re low-income, or an immigrant, there’s a lot of social isolation, and our biology as humans is that we thrive among others, when we’re part of a social network. We feel like that’s something we’re providing to our parents.” 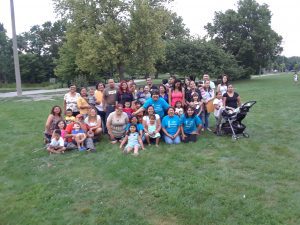 A note on language: With the exception of Lucy Gomez-Feliciano, all interviews were conducted in Spanish and translated into English. Original quotes are included where possible, but for the sake of space, many of the quotes you read here are translations. 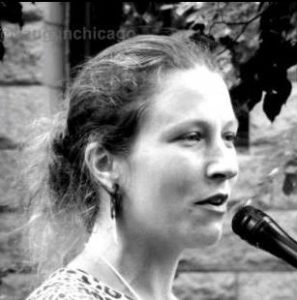 Kate Duva, aka Kate O’Rourke, is a novelist, performer and poet, as well as a mama, developmental therapist and intergenerational community educator who uses dialogue, popular education, serious play, and creative arts to bring together society’s unsung peacemakers to pool their collective wisdom and power. She is a certified Caring Economy Advocate and an activist working at intersections of caregiver justice, education justice, racial and gender justice in the wonderful and wildly corrupt metropolis of Chicago, Illinois. Her writing has appeared in numerous publications, most recently on the MomsRising blog for her essay Domestic Workers Save Lives, and in 2016 she won the Chicago Bughouse Square soapbox championship for her speech Power to the People Who Care: A Warrior Mama’s Manifesto. Reach her at kate@prosocialpower.org, or check out www.prosocialpower.org.

A Web of Generations: Housing for All Ages at Chicago’s H.O.M.E.

This is the third blog from Kate Duva, read her first ‘G...

It is wonderful to announce our second monthly Guest Editor ...