So the European and local elections are over, and once again it looks like a result underpinned by low turnout and a general lack of interest, especially from young people.  Parties seemed to be falling over themselves to say how much they love communities and want to give them more powers.  It’s the UKIP manifesto that takes it the furthest, raising the interesting question I want to explore here, namely “is it possible to give communities too much say in local affairs?”  Is giving communities a say always a good thing?  It’s not an assumption I saw challenged at all in debates around the elections, so it feels important to make a space to explore it here.

“Real decision-making should be given to local communities”.

Well hear hear, I’d be all for that.  Sounds very Transition.  Tell me more…

Skirting around the pedant’s point that it should surely be ‘referenda’, let’s look at what they add to this:

One might imagine that from a Transition perspective, giving powers over local decision-making can only be a good thing.  But there are a few very real flaws in this proposal which I’d like to explore here.

Giving people rights to decide local planning decisions is all very well.  I’d be for it, up to a point.  But it should be remembered where UKIP, and increasingly, the Conservatives, are coming from on this.  Later in the Manifesto UKIP pledge to: 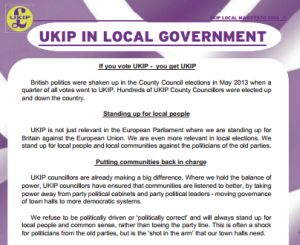 Such extreme devolution of decision-making is relatively do-able in a world where you don’t believe in climate change, a position UKIP held until about 4 weeks ago. Roger Helmer, UKIP’s Environment Spokesperson, who in 2009 accused the Church of England if having “abandoned religious faith entirely and taken up the new religion of climate alarmism instead” and recently wrote “believe me, I should like nothing better than to re-open the mines, and to restore a once-great British industry”, as well as proposing banning the teaching of climate change in schools, now believes in the science at least, but not necessarily doing anything about it.

But if you do take a view that climate change is a huge and pressing issue, and that cuts in emissions are now a matter of survival, then things look very different.  With the pressing need to reduce emissions, giving power to communities to decide everything without any corresponding responsibilities is insane.

What we should be doing is to say that each planning region is given certain targets by central government.  For example, this town needs to build 400 new homes, but also to cut its emissions by 20% over the next 5 years, and we could even throw in a target that 70% of homes built need to be genuinely affordable and in community ownership.

Then, for sure, give communities the power to decide key decisions, but if they fail to press developers to build genuinely low carbon homes with renewables installed, then they will need to make up the carbon cuts needed by either either allowing a wind project, or using Section 106 money to fund a major retrofitting scheme.  We can’t have it both ways. 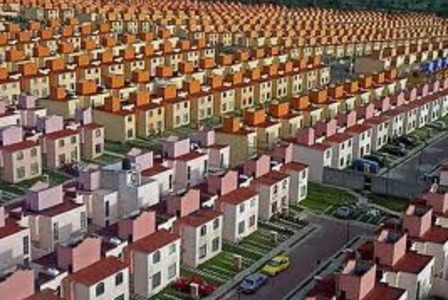 In the current mad scramble to recreate the very housing bubble that caused the economic crash in the first place, it’s all about numbers of new houses built.  No consideration of who builds them.  Or how well they’re built.  Or what they’re built of.  Or how much energy they’ll use once built.  Ministers and, it is assumed, the rest of us, are supposed to feign wild delight and gratitude at any old shit housing thrown up anywhere.  “It’s good for the economy” apparently.  Public health professional Angela Raffle told us this week:

“Economic growth and jobs in the pharmaceutical industry are now more important to the government than human health”.

You could say the same thing about building and housing.

But we can do better than that.  The problem isn’t that communities need to be able to decide on every development proposed in their area.  The problem is that what is proposed, and what they feel is possible, suffers from a chronic lack of imagination, a paucity of possibilities, one of the reasons Transition can be such a powerful thing.  The spirit in which these powers are offered is not one of genuine empowerment, but rather in a miserly spirit of stopping development going forward.  With a dash of imagination and a few pinches of genuine empowerment and support, we can do a lot better than that. 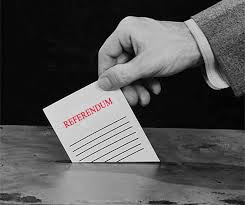 There is also a need for strong leadership here, rather than devolving everything (you’ll note that UKIP don’t devolve the powers of referendum for communities to vote on the degree of protection for workers, the levels of tax millionaire businessmen should be paying, and so on).  At the moment we have a government riven over the importance, or not, of climate change, which gives it secondary priority to economic growth, to saving money and the removing “red tape”.  They pass this schizophrenia down to local government along with the starting point of a presumption in favour of all development which is now reclassified as “sustainable development”.  So then the decisions taken at the local scale need to take place in this confused context.

Imagine if we had a government clear on the need to rapidly cut emissions. A government that encouraged a national conversation about climate change and what actually needs to be done in order to reduce our emissions far quicker than is currently the case. A government that takes action nationally and internationally.

As part of that it could set binding targets for local government, and support them in achieving them.  It would be a government which sees economic activity as arising not from doing things exactly the same as before, but differently.  A government that sets a clear context for planning, setting out both rights and responsibilities.  It is their role also to create as many opportunities as possible for community involvement, for social enterprises and cooperatives.  If the community then wants to come up with other solutions, they are entirely empowered to, but in a context.

4. Referenda are not neutral

There is a real question as to whether referenda for everything is actually a more democratic way to go.  I spoke to Peter MacFadyen, Independent Mayor for Frome (who we will be interviewing next month here), who told me:

“People elect people like me as a councillor and then say “I trust you Peter.  I’ve elected you in order to make the decisions for me.  I did it so I don’t have to read all these papers and get involved”.  Giving that level of power to what would inevitably be, at least initially, a very few people who showed up, would be deeply dangerous”.

Who tends to mobilise to vote in referenda?  Generally those with time, skills and money.  And often those who already own property. It leads to an intergenerational deficit, where people mobilise to vote against wind and solar projects because their house values and view are more important than the needs of future generations, vote against new housing developments for similar reasons, rather than because they don’t create sufficient opportunities for young people locally, whether in terms of work or affordable housing.  Bugger the climate, bugger creating a town with opportunities for young people.  As Helen Lewis put it in the Guardian recently:

Because owning a house is like having an extra vote – a vote for house prices to keep rising, mortgage rates to stay low and for supply to be constricted to prop up the whole shebang. By owning your own property, you get a say in planning law too – your objection to that new tower block counts for far more than the indirect, dissipated unease of all the people hunting desperately for somewhere affordable in the vague vicinity of their work.

She then went on to argue, wrongly in my opinion, that the solution is to build on Green Belt land, but her opening analysis still stands.

While the government’s Localism Bill gives communities many useful powers, such as the Right to Build and the Right to Bid, it doesn’t factor in the need to support, inspire and train them in how to make best use of them.  As a result, in spite of the bill being passed in 2011, there has still not been, to the best of my knowledge, a Community Right to Build Order applied for anywhere in England or Wales.  We need to invite communities to sit down to a feast of possibilities.  Instead what seems to be happening now is that communities are being given partial and selective rights but in the absence of a wider discussion about our responsibilities to future generations and for each other, with no care given to what support and empowerment communities need to actually be able to take wise decisions together.  They’re not the same thing at all.

Referenda offer a huge opportunity to educate, engage and inspire communities with new ideas.  As the Atmos Totnes initiative nears the end of its negotiations over the future of a derelict industrial site and starts to gear up for what we think is the first Community Right to Build Order in the country, we are seeing the referendum that it results in as a huge opportunity for public engagement, building of the community’s self-confidence and sense of what’s possible.  If done properly, referenda can be extraordinary.  If done in the way the UKIP manifesto promotes, it could all too easily be a tool of the curmudgeonly, the selfish, the short-termist.  As a new report states that the collapse of the West Antartica ice sheet is now inevitable, and the White House warn that “the old normal is broken”, that’s the last thing we need.

Note: Transition Network is avowedly non party political. In previous blogs we have taken both this and the previous administration to task over policies.  Next month our theme is ‘Transition and Politics’, and we are aiming to speak to representatives of all the main political parties.