I had the great honour the other day of formally opening the UK’s first urban mushroom farm.  City centres are full of unused office space, either due to lack of demand, or due to developers mothballing them for future development.  What use might be found for them?  And might a creative interpretation of the term “market garden” help make a new generation of urban farmers viable?

Adam Sayner and Eric Jong of Fungi Futures CIC came up with the idea of GroCycle Urban Mushroom Farm as a creative way to use both empty offices, and waste coffee grounds.  I have a bit of a vested interest in their work.  In 2012, at the first Totnes Local Entrepreneur Forum, I was part of a group who pitched the idea of a craft brewery social enterprise, and they pitched Fungi Futures, a business they had already started on the nearby Dartington estate, making “Grow Kits” from the town’s waste coffee grounds.

We have since then worked closely alongside each other, they now use the brewery’s spent grains for their mushroom spawn which is then mixed into their coffee waste, and earlier this year, for the 2014 Forum, we brewed ‘Circular Stout’ (“the Circular Economy in a glass”), a stout flavoured with their oyster mushrooms (it was delicious, and makes an appearance in this video of the event).

The step up from producing Grow Kits to an Urban Farm is quite a big one.  They’ve been getting set up there for several months now, and the event I was invited to was their official launch, attended by about 40 people: journalists; people who buy their mushrooms; people who supply them with coffee; people who were just intrigued to see what they’re up to. 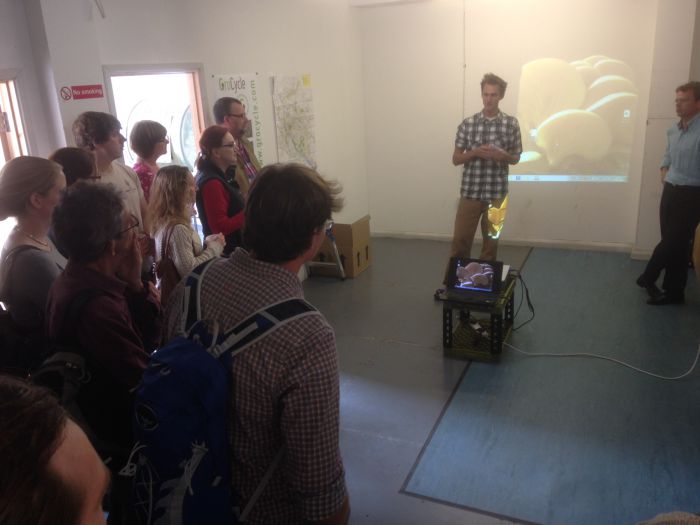 The offices they inhabit they get free of charge.  The landlord is happy to see something happening inside the space and they’re their no longer having the liability for the business rates on the property.  Eric and Adam are currently in the final stages of a fascinating process of trying to establish that, as a business, they should be exempted from business rates.  After a detailed reading of the legislation about what is and isn’t exempted from business rates, they wrote to the Valuation Office Agency to say:

Our primary activity in the building will be the production of Oyster mushrooms. As far as I can see from the info found at the following link it appears we could be exempt from business rates as the building is, in effect, a ‘market garden’.

The passage in question states:

b) it is or forms part of a market garden and is used solely in connection with agricultural operations at the market garden.”

Their argument is that their business qualifies as a market garden.  They elaborate:

It is not necessary that the plants should be grown in natural soil; it has been held that a building used for the propagation and growing of mushrooms in trays filled with compost specially prepared from wheat straw and horse manure was a “market garden” – see J Beveridge & Co Ltd v Perth and Kinross Assessor [1967] LVAC RA 482. Nor need the building have what might be regarded as the traditional appearance of a market garden – a disused multi-floor cotton mill utilised for the growing of mushrooms would appear to satisfy the term “market garden”. Similarly a building in an urban area growing bean sprouts would satisfy the term “market garden”. However, if the product was then packed together with other bought-in vegetables, this part of the premises would not be exempt.

A final decision from the Agency is expected any day now.  They expect not a full exemption, but somewhere around three-quarters of their business rates to be exempted.  This interpretation of “market garden” opens the possibility for other imaginative urban food businesses to follow the same path.  Here’s a short film they made about the Farm:

Coffee grounds are collected by bicycle from around Exeter, and brought to the Farm.  They are then mixed in a large compost drum with the mushroom spawn innoculant.  This is transferred into bags in the incubation innoculation room, shelves lined with innoculated bags that will be used for their Grow Kits, or longer cylindrical tube things that, once the fungus has established itself, will be transferred to the ‘Fruiting Room’. 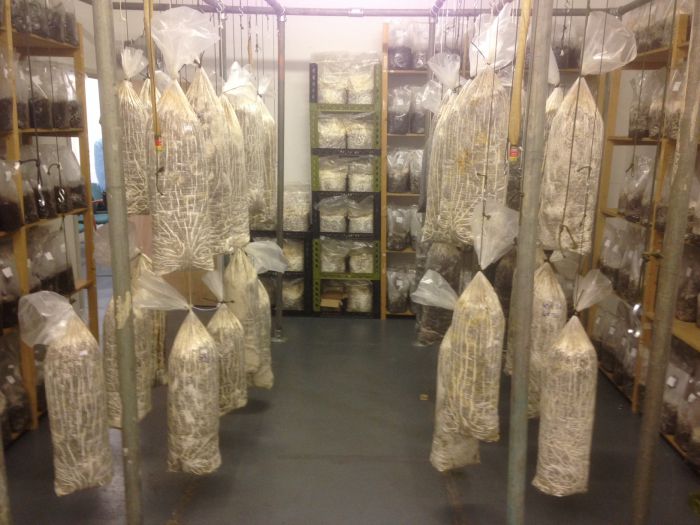 Entering the Fruiting Room is an eerie experience.  It’s somewhere between an on-land coral reef and something out of a science fiction film.  It’s a large clear plastic tent, kept to a certain temperature and humidity level.  The fruiting bags hang from the ceiling, and from them burst oyster mushrooms, beautiful, pristine, alien-looking.  Oyster mushrooms are very beautiful, very valuable, and as I found out when I got the bunch of them that I was given home, rather delicious with butter, garlic and a little bit of cream.  They are also awesomely good for you.  Check these out… 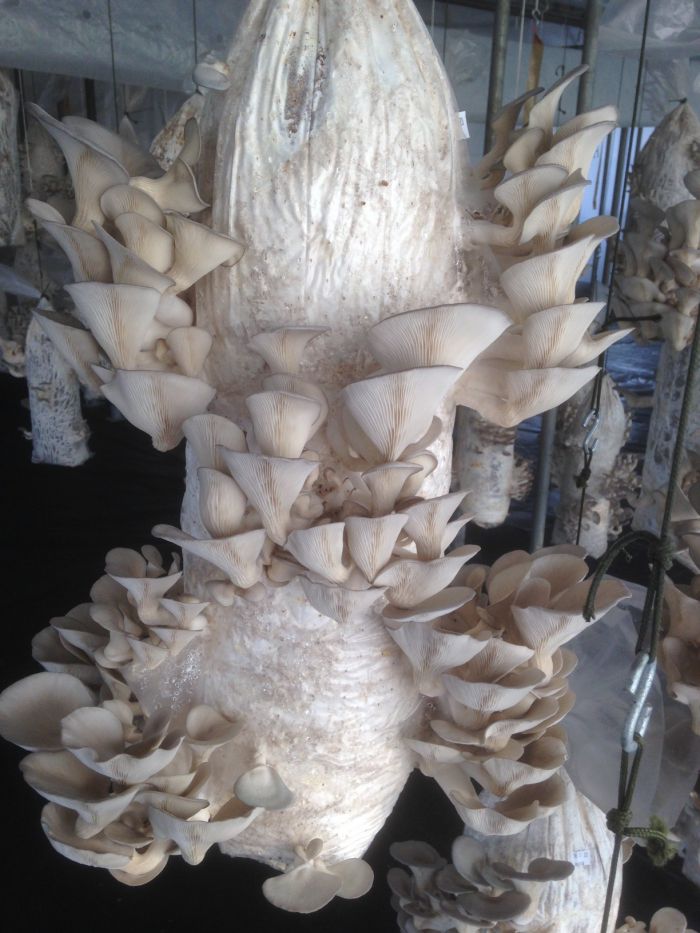 Standing by the window of the room in which the fruiting mixes are tumbled in the compost tumbler, buildings the same as that inhabited by the GroCycle Urban Mushroom Farm run off into the distance, all empty apart from the shops on the ground floor.  To the best of my knowledge, GroCycle is the first urban food-producing enterprise to move in, but many more could follow.  The BBC recently ran the story of ‘Growing Underground’, growing food in unused sections of the London Underground. 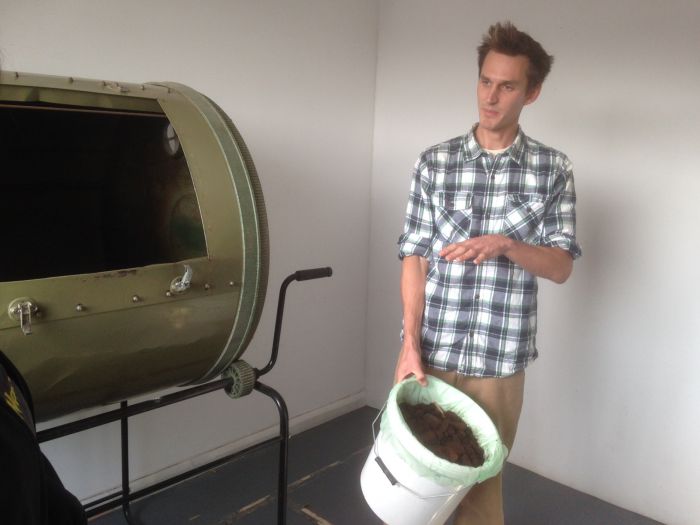 There are lots of interesting and innovative food businesses that could find a foothold in the empty office blocks of England.  Salads, sprouting beans, perhaps hops harvested from up the sides of buildings.  Perhaps ground floors could be converted into the kind of incredible hydroponic/aquaculture system I saw in Milwaukee last year in the Growing Power project.  Perhaps even when the building’s owners actually get round to redeveloping them they might design urban agriculture into them from the start?  Flat roofs for urban farms, balconies for fruit production, maximising south-facing spots for food growing.

As I headed home with my little bag of Oyster mushrooms, I felt I had had a taste not just of one of the world’s most delicious fungi, but also a taste of what rethinking waste management, urban job creation and food production could look like.  It was a tasty vision indeed.