Back in December 2009 when a few Belper residents first met to talk about this new thing called the Transition Network, the community of Belper was already actively battling the mighty Tesco;  they had bought the derelict Thornton’s site in the centre of the town, by the River Derwent, to build a superstore. We had two community groups that evolved from the fight, BATS (Belper Against Tesco Superstore) and Belper Civic Forum, both who were already doing an excellent job as Transition Belper formed and developed. They even managed to get our borough council to develop a Supplementary Guidance Document, which was probably the final straw for Tesco, who in 2013 said they were giving up the site and all went quiet.

In the meantime Transition Belper members were busy following the 12 steps in the Transition Handbook and developing strong links with the local authorities at all levels, town, borough and county, working on projects of interest to the council members and officers and wherever possible offering support, always making it clear we wouldn’t get involved in party politics. I’m not sure how conscious a decision it was but we didn’t get involved in the Tesco’s fight or any other potentially divisive, issues in the early days.

When asked by the borough council sustainability officer if we could comment on new planning guidance documents, we jumped at the opportunity to look at the sustainability and resilience issues, the core of what we are about. Bit by bit we were being asked for our thoughts and comments on everything coming through, including the development of the core strategy, soaking up a lot of time and effort. At the moment we are not sure if it was worth the time and effort because every time an issue crops up we are told the planning regulations were relaxed a couple of years ago…

In 2013, out of the blue we were contacted by our local MP who kept reading about Transition Belper in the local newspapers and wanted to learn more. At the end of a pleasant meeting in the summer of 2013 (just before summer recess) I handed over my newly purchased, and read, copy of The Power of Just Doing Stuff, for her summer reading. A few weeks later our MP returned my book and asked the simple question ‘Is there anything I can do to help’? 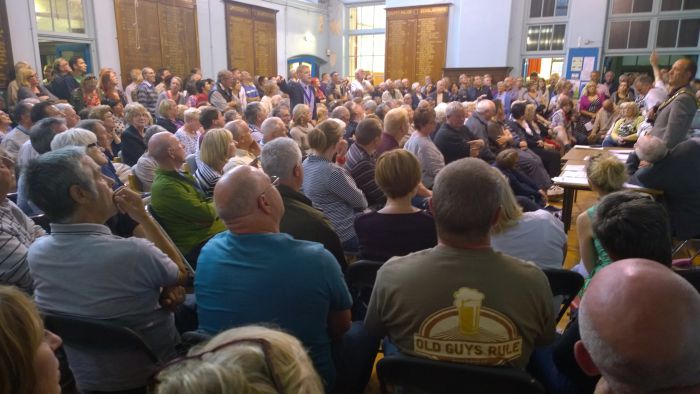 This led to a series of Belper in Transition meetings where Transition Belper coordinated all of the locally active community groups and small businesses and our MP invited council members, NHS managers, Further Education principles, business owners and major landowners to meet up together to discuss our vision for Belper, ensuring that ideas were shared and efforts co-ordinated.

Not everybody turned up to the first meeting, but it was clear how passionate the people of Belper were and, to some degree, frustrated by our inability to influence major land and buildings owners on key sites with derelict or poorly utilised buildings, such as the world heritage mills. Equally we had no idea what our own councils were planning regarding things like library developments. The conclusion was that we needed to talk to the landowner with the largest derelict site in the centre of town, Tesco.

Our MP took the task of contacting Tesco and trying to bring them to the table, and fairly quickly we got a positive response: they would come to town and talk about their plans, and listen to the community. As Transition Belper had not been involved in the original fight it was relatively easy for us to develop a reasonable ‘critical friend’ working relationship, which we continue to have (ish). Whilst Tesco seemed to listen to the community ideas and suggestions it was clear that they have given up on the store and now want to sell individual parcels of land as quickly as possible for housing development, against the Supplementary Planning Guidance, developed in 2012, which required an overall masterplan and mixed use development.

Tesco submitted an outline planning application for housing only, on part of the site, and ignored every issue and suggestion raised by all the community groups who had attended the Belper in Transition meetings – we had to do something. Maintaining our critical friend relationship, we ensured that we were in attendance at the public consultation all day and tried to keep the Tesco staff and consultants honest in terms of what they were telling the public who attended the event.

We then had the challenge of formally responding to the application, despite us not having any planning consultants in the group. It was at this point we started to learn how weak the SPD document, that so many people had invested such a lot of time developing, was and how weak the local authority seemed to be due to the National Planning Framework, which seems to weight every decision in the way of the developer.

Also during 2013 Belper Civic Forum, who do have planning consultants within their team, asked if we would support their efforts to get the Belper Town Council to agree to develop a Neighbourhood Plan for Belper (NP4B). Despite the opposition of a particularly influential councillor and several letters and heated debates, we finally got the approval to go ahead this year and now Transition Belper, Belper Civic Forum and Belper Town Council are starting out on the journey of developing NP4B.

Before we even started the NP4B process news of an extraordinary change to the Amber Valley Borough Council core strategy started flying around on social media. Following the Inspector telling AVBC to go and rethink their housing strategy, in particularly the delivery of housing in the next 5 years, Belper’s allocation for strategic housing went from 0 (zero) to 570 on three sites, two of which are green field farms in the world heritage buffer zone. This change to the core strategy happened weeks after the elections that saw AVBC change party control; to one which now differed from Belper’s town council.

After the initial shock Belper did what it does best and rallied, setting up a new residents group, Protect Belper, to first start trying to understand what a core strategy is and then what these changes really meant. When people from Belper wanted to understand more and learn what they could do to help to stop this, a number of people from Transition Belper were being asked what they could do. Whilst we tried to focus on sustainability and resilience issues, such as flooding, building houses for commuting to Derby (picking up the City’s housing allocation in addition to ours) it became immediately apparent that we needed to play a role in supporting all of the activity happening in the area. We set up an Amber Alert page on our website with information and guidance gathered from a variety of sources. We found Transition Belper being mentioned at Town Council meetings and again at a Public Meeting organised by the town council with over 400 people in attendance in a positive ‘knowing what they are doing’ type way.

For 6 weeks over the summer, the time we had to respond to the core strategy changes, several people from Transition Belper dropped everything they were doing (at some cost to projects like trying to develop a community owned Hydro project) to respond and support those people looking for help. Whether it was helping the Ramblers Association on walks of the proposed sites, feeding information to the consultant preparing the town council response or supporting the networking between individuals and organisations, it was a busy time. 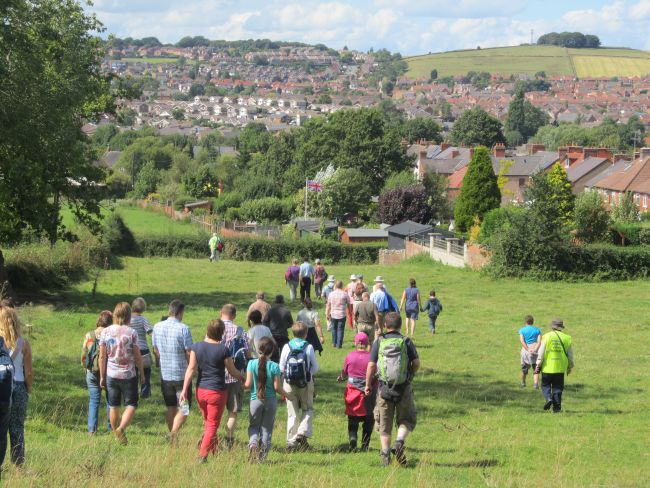 Whilst it has been a demanding and stressful time we have seen more interest in Transition with website hits, supporter numbers growing and our facebook site going over 300, from about 200 three months ago. We have also seen one or two new faces at recent meetings, wanting to know what this Transition thing is about.

As I write this we don’t know the outcome of the responses (council meeting 15th October) but, whether we like it or not, Transition Belper is now a fundamental part of the future of Belper and we have more challenges ahead. Let’s hope the neighbourhood plan will allow us to be proactive rather than reactive, if it really has powers.

This week’s battle is news that one of the largest retail units on the High Street has put in planning permission and change of use from retail to a café (Costa Coffee). Again, advice we have received tells us that the planning laws put in place to prevent this were relaxed a couple of years ago.

This week’s big win is that on Friday we meet the judges of the Great British High Street competition. We’re on the shortlist for Best Market Town, and we will all smile as we walk past the empty unit potentially being developed by one of the competitions sponsors!