It’s a few weeks since the Exeter Pound, which we last caught up with a few months ago, was launched.  As we explore our theme of fairness, we asked Martyn Goss, one of the currency’s Directors, to share this thoughts as to how the scheme will make Exeter a fairer city:

“September 2015 saw the launch of a new community currency in Devon.  From the start of the month the Exeter Pound has been tradable in just over one hundred independent businesses in and around the city. Exeter has therefore joined Bristol, Totnes and a few other places in Englandto introduce a local money system that has no value outside its own community, but which will be worth much within it.

Exonians are now able to spend their own notes (one, five, ten and twenty Exeter Pound denominations, plus a 15 EP special for the Rugby World Cup!) in registered shops, cafes, pubs, leisure venues, restaurants and elsewhere.  Exeter Cathedral will accept the new money in its shop and cafeteria, as well as for admission charges.  Exeter Chiefs premier rugby club is doing the same.

In the longer term, the Exeter Pound will encourage more local commercial activity, help prevent poverty and reduce environmental damage.  There will be social, economic and ecological advantages, which will all be strengthened further when it goes digital in 2016.

In a global economy where smaller, family and independent businesses can really struggle to survive, a community currency provides a slightly more level playing field. As an advanced loyalty scheme, Exeter Pound offers people a chance to come alongside local companies and share a sense of stability and confidence with them. In the longer term this makes for a fairer and more sustainable society.

The Exeter Pound generates confidence and trust. We can ask the shops or cafes where we spend our money what they will do with it – ideally purchasing some of their supplies from other local firms. We cannot do this with sterling. It is too anonymous and unmanageable. 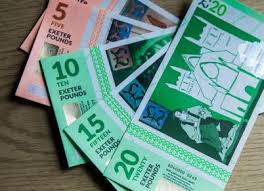 There is no doubt that the Fairtrade movement has brought about a greater awareness of who benefits from purchasing power. My reducing the middle-takers (which is what the word ‘enterprise’ literally means) and developing more direct relationships between producer and consumer both can take advantage. My hope is that the Exeter Pound and its sister currencies will also have the same educational effect on the public. The kind of financial systems we have created direct the gains to those who are least vulnerable. Fair-trade and local money can change this and promote a just and sensitive economy where we value people and the environment more than quick monetary returns.

The Exeter Pound is a symbol of imaginative hope and expresses a sense of fairness which the global money system does not. If I don’t like it, I could probably change a community currency. I certainly couldn’t change to Dollar or the Euro!

The deeper message of our new money is that local people can begin to make a positive impact on their city – in spite of the odds.  The Exeter Pound effectively empowers local people and that is why it just and fair!