Emma Goude, director of ‘In Transition 1.0’ and ‘In Transition 2.0’ recently travelled to Russia to present the film at a major film festival there.  Here she reflects on the trip and what Transition means in Russia:

An activist film festival in Moscow, Delai Film (which means Do It Yourself) kicked off this year with a showing of In Transition 2.0.  As the Director, I was invited along.  Andrej, one of the many volunteers, picked me up from the airport and was very pleased to discover he’d been sent to meet the Director of the ‘famous’ Transition movie!  In Transition 2.0 has been making its way around international eco film festivals with no effort from me.  The film, like Transition itself, is not something that is imposed on people.

Andrej was part of the largest group of independent vote watchers ever assembled for a Russian election and he told me on the way to the hostel, that the elections were rigged and the government corrupt.  Do they need any other reason for Transition than that? 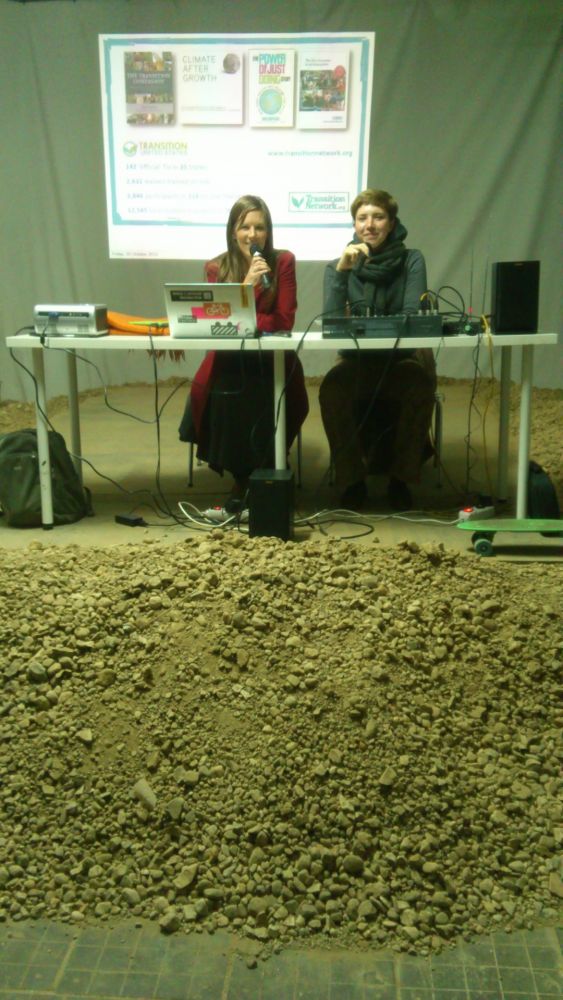 My visit to Moscow started with an interview on Russia Today, which was aired on their Primetime News Programme.  The presenter’s interest was environmental; as was another journalist I was interviewed by after the film showing.  So the media in Russia seems focussed on the potential for Transition to address environmental issues not being faced by government.

I discovered that the Russian government doesn’t recycle.  With so much land to fill, they don’t need to pay China to take away their ‘rubbish’.  Recycling was seen as a necessity when the Communist regime spent most of its money on the military.  With little money flowing through the economy, people had to make the most of what they had.  But when the Soviet Union collapsed, recycling was discontinued.  I see this as a perfect opportunity for entrepreneurs to organise  creative upcycling businesses.

In Rob Hopkins’ absence (he doesn’t fly, apart from his recent US trip) it was left to me to give a presentation on Transition to a bunch of interested activists.  The stage for the seminar was an über cool looking pile of rubble in a disused paper factory.  It couldn’t get any more Transition than that.  I had a translator who was pretty fluent but it was interesting to discover what didn’t translate so easily.

Peak oil and Tar Sands were a struggle for her and this is no criticism of her.  The petroleum industry in Russia is one of the largest in the world.  If Transition is going to speak to the Russian people then the idea of peak oil is not going to motivate them.  Rather like Transition in Brazil, which is effectively the new Saudi Arabia, Transition will probably look different in Russia from the rest of the world.  And that’s what I’m so fascinated by.

This small group of activists, who were inviting Transition into Russia were doing so for their own reasons.  Each had interpreted Transition according to their own personal passions.  One person thought of it as a way of improving the city.  Another as a tool to create a powershift and the opportunity to self-organise community.

Moscow seems quite cosmopolitan on the surface and has more billionaires than any other city, beating New York 3:1.  People carry their take away Starbucks coffee cups and click away on iPads and Smartphones but the rest of the country is left out and that’s very hard to ignore.  I was told that people are already tired of consumerism in Russia.  Most of the country doesn’t get to play the consumer game.  Social inequality and disappointment with capitalism might be another motivation to start Transition.

Russia’s oppressive history has left a deep scar on its people and I saw pain etched on the faces of the older generation.  I asked Andrej what he would change if he had a magic wand.  He said that people live in fear and he would change that.

In the discussion after my talk, someone mentioned that setting up a local currency in Russia would likely lead to arrest.  So fear of arrest is the most obvious way people are kept ‘in their place’.  Unless this can be addressed, most people are not even going to feel that Transition is even possible.  Most Transition projects are unlikely to get you arrested but singling out one that has the potential for arrest, I think is a reflection of how fear holds people back.

I was also invited onto a panel leading a discussion on community, as part of the festival programme.  It was quite a heady focus on why community is hard to create in a city.  I felt that the atmosphere was one of defeat before Transition had even begun.  Older panel guests talked about not having state funding or support.  Maybe they hadn’t watched the film.  They’d certainly missed the point about not waiting for government to help them.

Younger people focussed on what they were already doing that was positive. Lelya Jvirblis, who was hosting the discussion, shared her guerilla gardening activities.  Andrej joined the discussion and told us about his battery recycling business on the side.  Another member of the panel, Petr V. Ivanov, brought to our attention a role that already exists, whose job it is to network to find out and implement what people need within their community.  This felt more inspiring and showed that, as usual, people are already doing ‘Transition’.

I’ve no idea whether official ‘Transition’ will take off in Russia.  Perhaps they are waiting for someone else to start it.  Perhaps they need a little extra confidence boost in the form of Transition Training.  Perhaps the Transition books need translating into Russian.  Maybe the film will fan the embers (and flames) of the fire in their bellies and encourage them to join the 1400 other initiatives in 44 countries around the world.  I’ve no idea, but it’s a very good sign that it featured so highly in their Festival Programme and Delai Film found the funds to pay for my trip.  Shanghai next please…I speak a little Mandarin!

You can see an interview Emma did on Russia Today at 39 minutes in here. Here is the trailer for the film in case you haven’t seen it, and you can order the DVD here.