One tool that some Transition initiatives have been finding useful in thinking about resources in a different way is Streetbank.  Streetbank, as its founders put it, “puts you in touch with your community, bringing neighbourboods closer and making the world a bit nicer”.  Sounds pretty akin to Transition we thought.  So here’s a conversation we had with Sam Stephens, the founder of Streetbank.  We started by asking him how Streetbank came about …

It all started with a pint of milk. Four years ago I became friends with my neighbours through borrowing a pint of milk. Soon we were regularly knocking on each other’s doors to borrow things and help each other out. Over time they became friends and so we decided to take the walls of the garden down to share the space. Later I saw someone on my street using some hedgecutters which I could have done with borrowing for my overgrown hedge. It seemed to me ridiculous that there were potentially hedgecutters in every house in the street but they would only be used for one afternoon a year. 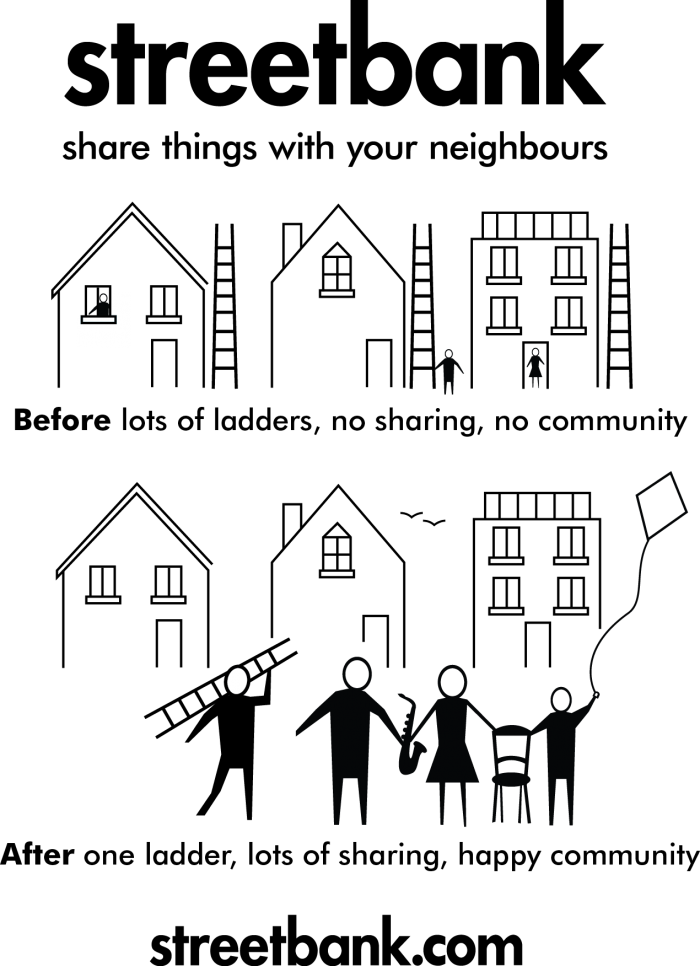 That sparked an idea – and that idea developed into Streetbank.

So Streetbank is a website that helps you share things and skills with your neighbours.  It allows you to do the “knocking” online – and to reach a wider group than just your immediate neighbour – but obviously you have to meet face to face – and that builds community which is what we are all about.

How does it enable communities to think about resources in a different way?

All Streetbank does is to make sharing with your neighbours easy – and because people are time poor that easiness is helping to unlock resources and generosity that would otherwise remain untapped. People and things are connected, community spirit is strengthened and large amounts of things and skills are kept out of landfill. We hope it is similar thinking to the Transition movement and hopefully we’ll be able to bring people into that thinking because it is so easy to get involved.

What kind of a reaction are you seeing to it?

The reaction has been incredible.  We have grown to a community of over 34,000 people sharing their things and skills – mostly in the UK, but with more and more communities springing up worldwide in places like Melbourne, Toronto and Seattle.

We have witnessed everything from small acts of kindness such as neighbours giving away tomatoes plants, to huge displays of generosity, like members getting together to tidy an elderly neighbour’s back garden, donating laptops for children in care and giving away flat-screen TVs.

Some might argue that the kind of economy you are potentially creating with Streetbank doesn’t offer much to our traditional local economies (tool shops etc).  What sense do you get from Streetbank about what the new economy could look like?

We see Streetbank and other sharing economy initiatives as not competing with traditional local economies but part of an ecosystem that allows us to use all that we have better.

What are you seeing in the way of outcomes/relationships/initiatives emerging from it that you didn’t expect? 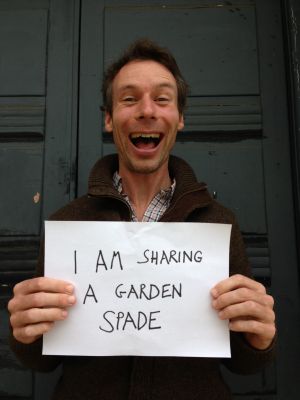 We didn’t quite know what to expect when we started Streetbank.  We hoped that it would give people a simple reason to connect with their neighbours and that from this good things would start to happen, but there have been some outcomes that have taken us by surprise.

We are seeing how Streetbank has brought increased confidence, a sense of purpose and sparked unlikely friendships for someone living with Bi Polar for example.  And how it’s improving the well-being of people that struggle for health reasons with domestic tasks like gardening and DIY.

We find that once we start talking to our neighbours, you realise that there are things that you have and ways that you can help other people that that you didn’t realise.  Through local connections and small scale actions, we’re seeing positive changes to communities and it’s exciting.

Isn’t the point of Streetbank ultimately that nobody would need Streetbank anymore?  Isn’t the idea surely just about catalysing a return to how things used to be? 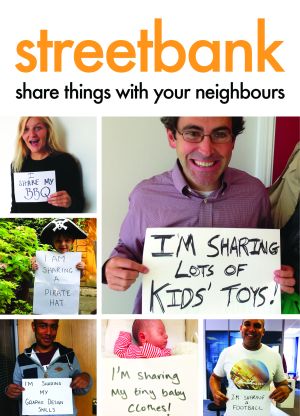 Yes and no! Quite quickly you discover who has the closest ladder to you – and that means you don’t need to go through Streetbank to borrow it. You just drop them an email or knock on their door. However, its quite hard to remember who has what so it’s likely that Streetbank will remain a useful inventory of everything in the neighbourhood.

The point of Streetbank is to make communities interdependent and to make sharing as normal as shopping. In some ways we are encouraging a return to how things used to be, but we’re doing that in the context of the world that we live in now.  As well as being a catalyst, Streetbank is a facilitator.  We’ve created the technology and functionality – with the speed and efficiency that we all expect in this fast-paced, digital world – to make neighbourhood sharing easy.  Within minutes or hours people are matched with new owners for their things, or their requests are met by others.

Have you seen many Transition initiatives getting involved, and how have they made use of it?

There have been a few Transitions that have led the way – especially Ealing and Dartmouth Park. They’ve been using it much like everyone else – to share things and skills and to post requests. We haven’t seen particular differences from Transition members – but I guess the values that we stand for are old-hat to Transition!

What is the model behind Streetbank?  Is it a voluntary tool for self-organisation, or is it a social enterprise, and if so, what is the model?  How does Streetbank itself benefit from this process?

Streetbank is a not-for-profit, registered as a Community Interest Company. Our hope is that we will be funded by donations from our members – a bit like Wikipedia – and that in time the Charity Commission will recognise us a charity.

If people are interested, how can they get involved?

Head to www.streetbank.com – it takes about 90 seconds to join and once you have you’ll be able to see everything your neighbours are offering in your square mile.