I like the idea of ‘making space for Nature’. I like space, gaps and emptiness. I like Nature. Yet as I began to unpack the topic in readiness for this blog I began to feel like I was sitting in a box looking through the wrong end of a telescope. Nature is all we have, we are nature, the idea of making space is a no-brainer, but to me it means making space in our brains for thinking about nature in a different way. A way that involves rights for Nature as well as responsibilities for humans, a concept of citizenship that includes being a steward of a place, the knowledge that all economies are underpinned by ecologies and if we don’t start taking care of our ecologies the future is pretty bleak.

In 2013 I was part of a small team of people that worked with the local communities in and around Falkirk (near Glasgow, in Scotland) to draw up a Community Charter in opposition to the first application in the UK for commercial drilling for unconventional gas. I had just come out of a group enquiry about what an effective community response to a local ecocide (harm caused to an local ecosystem beyond its capacity to regenerate) would look like. And here was a potential ecocide in the making that was calling to be addressed, and a community looking for help. 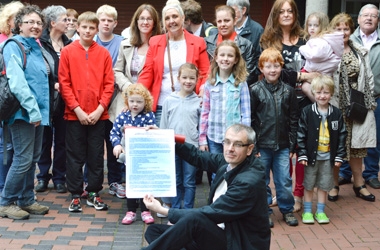 Unbeknownst to the peoples of Falkirk, the Australian company Dart Energy had been prospecting for coal bed methane in the area for the previous 20 years. With their application for a drilling licence, Dart’s intent became public knowledge. Families with long-term ties to the area who had recently moved back into new housing—to a place that had been scarred with coal mines and industry but was now green and health-full—found that some of the drilling would go right underneath their homes.

A small group of residents formed and compiled an impressive community mandate, detailing the harm that would be potentially caused to human and environmental health by the toxins used in the drilling (similar to fracking), the wholesale disruption to the environment and the release of underground gases into air and water. This was the point at which we connected: an area that had historically been dumped on, now in recovery, looking for a way to say not just what it was against but what it wanted its economy and ecology to be like for its children and grandchildren.

What we came up with was a process and a document. The process was a community consultation in the form of a world café at which we convened conversations around very simple questions such as: When you were considering buying a house here, what did you picture? How would we like our children to enjoy this place in 20 years’ time? What are the local places in the landscape that are important to me and why? What do you enjoy about living here and why? There were sub questions too:

•    How will ‘sense of community’ be maintained (e.g. events/public spaces)?

•    What kind of job opportunities are there?

•    What kind of leisure activities are there?

From off the densely-written sheets of flip-chart paper the community, at a further gathering, pulled a list of all the tangible and intangible assets that had been surfaced, as well as the values that the community had in common. We knew how important it was for the words of the community to be faithfully transferred to the document, the Charter. To give you a flavour of them here are two out of the 16 assets that the Charter for the peoples of Larbert, Stenhousemuir, Torwood, Airth, Shieldhill and California (the Concerned Communities of Falkirk) is calling to protect: 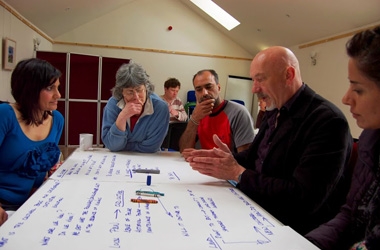 [6] Our natural resources and our aspiration for them to be used sustainably: to never allow our renewable resources to be diminished faster than they are generated, to ensure our non-renewable resources are reused and recycled effectively, and to avoid all related activities that might compromise our ecosystem.

[11] Our vision of a truly sustainable local economy, and our achievements to date: our commitment to developing a local economy based on managing and improving our Assets through, for example, leisure activities, tourism, renewable energy, ethical business and farming, recovering and restoring our historical and natural heritage, in ways which promote civic pride and continuity for present and future generations. Our aspiration for local economic development which offers long term job security and satisfaction for our children, and prosperity and time to enjoy our lives; where locally generated money remains in local circulation; that paves the way to an economy that does not risk the long term integrity, viability and resilience of our planetary boundaries, and thus contributes to the overall well-being of our community and ecosystem.

Just above the place in the Charter where the assets are listed is this statement:

“We the peoples of the Concerned Communities of Falkirk have come together and agreed that the following tangible and intangible Assets constitute our Cultural Heritage and underpin the qualities fundamental to the health, well-being, cohesion and identity of our communities, our natural environment and of the Earth itself.”

The point we were trying to get at, and that is enshrined in the 1985 Environmental Impact Assessment directive from the EU, is that human culture needs to be included as an integral part of the environment when any decisions about development are to be taken. We were offering a definition of sustainability that includes process: the process by which the local community has a voice in decision-making. We also wanted to make a case for participatory democracy that could sit within the planning framework.

The Charter was presented to local MSP Angus McDonald in July 2013 who then took it to the Scottish Cabinet. You can see it here.  It has been signed by Larbert, Stenhousemuir and Torwood Community Council, 31 local farmers, hundreds of local residents and over half of Falkirk Council. At the public enquiry that took place this March and April following objections to Dart Energy’s application the Charter played a key role in uniting the community behind a shared vision. We are still waiting to hear the outcome of the enquiry, which is due this month.  Meanwhile, St Ives in Cornwall is going to embark on creating its Charter in early 2015 and Totnes is thinking about it as part of the Neighbourhood Plan.

And what, you may ask, has all this got to do with people in Transition communities making space for nature? Firstly, we can work hard at reviving our local economies and creating green jobs but if we neglect to pay attention to the wellbeing of our air, water and soil we are by-passing what makes economies long-term sustainable and humans and other species healthy. Second, I see communities up and down the country opposing inappropriate developments of roads, industry, resource extraction and housing case by case. Raising fighting funds, spending huge amounts of energy and volunteer time, getting exhausted and then floored when the landowner or developer submits a second modified application.

That’s not sustainable, and it means that local government isn’t working in the interests of communities. It’s not that all development is bad and needs to be stopped. No, it is rather that communities should have a voice at the planning table in which they can point to their agreed assets and values as a benchmark for deciding which developments they see as beneficial and which detrimental, both from the point of view of the environment and of the community itself. Without that agency, communities become demoralised and the values of social and environmental concern decline while the values of big business and state dependency come to dominate. Governance may seem boring, but it is the linchpin for communities that want to make space for Nature and sustainable Transition-type local economies.

Isabel Carlisle is Education Coordinator for Transition Network. She is also a Trustee of Transition Town Totnes and a founder of the Community Chartering Network: www.communitychartering.org