What does it take to find the confidence to step over into actually starting a Community Supported Agriculture scheme?  Where does the drive to step from thinking “someone should set up a really cool market garden” to thinking “I’m going to set up a really cool market garden” come from?  On a beautiful summers day I headed up to the Dartington Estate to talk to Jenny Gellatly, one of the founders of School Farm CSA.  I found her picking peas in a beautifully well-organised, abundant, thriving market garden, surrounded by a huge diversity of produce.  I started by asking her how the garden came about:

“There was already a market garden here at School Farm and that had existed for 6 years, nearly 7 years now. We wanted to bring more of a community focus into what we were doing already, and form much more of a link with the local community, with people within the community. We also wanted to find a way that worked better for us in terms of actually selling the food that we grow, because despite the fact that we have lots of brilliant shops in Totnes, and independent stores that we can sell to, running, it’s very difficult for a small scale food growing project to make a living from that. 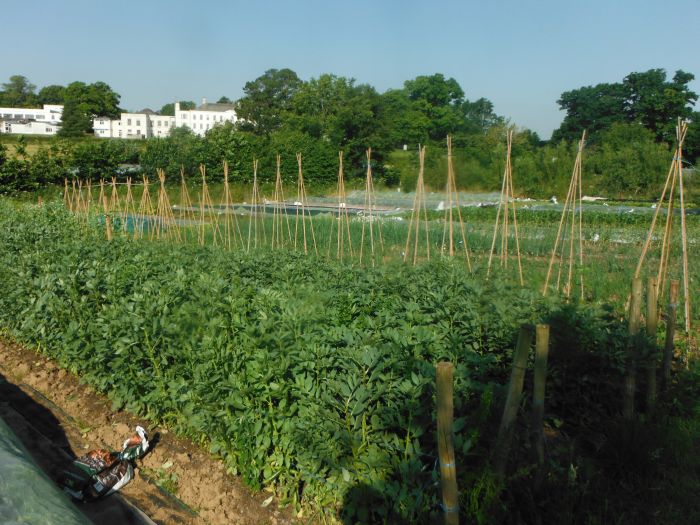 We thought that if we can make stronger links directly with the people buying the food then it would make the whole thing more viable economically. We’d have more of a social dimension to what we were doing and it would be reaching more people directly but also benefiting us as growers in terms of the social aspect and selling the produce as well.

How’s it been going so far?

By opening it out like that and making ourselves visible, it’s really brought a lot of support to us as growers, to the site, and to what we’re doing, and given us a lot of motivation to want to continue. I think it can get quite isolated as a grower at times if you’re not inviting the community in that way, so we’ve been really pleased with how it’s gone so far.

You were part of the Focal Entrepreneurs Forum in March. How was that?

It was amazing actually because we did it as a really last-minute thing.  We heard about it the week beforehand. We weren’t quite sure because we still feel fairly new. We still feel new now, but it definitely felt new 4 or 5 months ago! But we decided we’d go for it anyway and Laura, who’s one of the people I’m working on the project with, did a fantastic presentation about the difficulties that growers are experiencing in the climate that we’re having at the moment, particularly last year with it being so wet.

She also explained what we wanted to do and the different model we wanted to work to that involved the community much more. It took four minutes to explain it all which isn’t very long, but it was incredible the response we got, the room was absolutely buzzing about the project. People just loved it and wanted it to happen, and were prepared to support it in whatever way they could. It was a real boost (here is the video about the event that includes an interview with Laura).

Where are you in terms of moving forward as a viable entity?

We did have some funding this year to help with getting equipment that we needed, with setting up the volunteer days and running a course. If we want to continue next year then we do need to find the time to find some more funding for the next few years before we become self-sustaining. This year we’re seeing very much as a pilot year.

We’re taking the leap into doing the project and testing out the water in a way. We’ve found that because there’s been such a positive response, we know it’s something that people want to happen. Now we just need to find the time to actually raise the funds to continue the project next year and beyond. 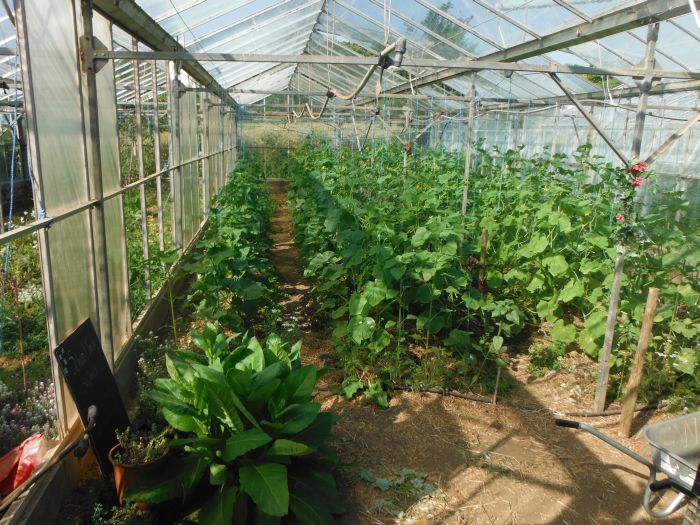 Our vision is that we’ll be able to take on more land and grow food for more people and involve more people, and that the project will become self-sustaining. We’ve visited a number of other CSA schemes across the country, and our research would suggest that we are looking at getting about 100 members, 100 households who are members of the project.  That’s a really exciting prospect for us, to have that many people involved.

You started out here as a student I think, and then were volunteering and now one of the people that are running what’s hoping to become a big, viable project. What was the process of deciding “actually this needs to happen and I need to be one of the people who does it”, rather than “wouldn’t it be great if somebody did something like that”…

It’s really interesting actually, because when I was doing the horticulture course, one of the places we came every week to learn was here.  It was learning with Nick Gooderham who set the market garden up. I just really wanted to work with him because I thought he was fantastic and I thought School Farm was fantastic. I could see lots of ways I could contribute because I had links to local people and local shops and local organisations. I also had experience doing environmental education so I could help Nick build that side of things. 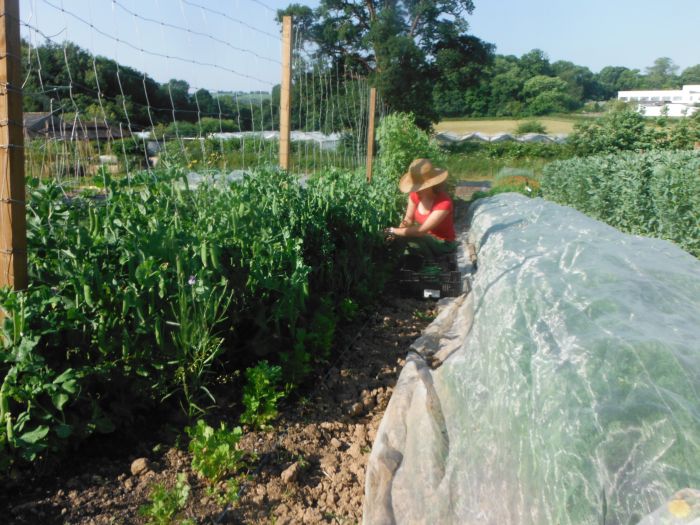 I talked to him about that and potential involvement and probably talked quite a lot about it! Nick gave me an opportunity and I did some volunteering here and started working one day a week. Then it was a real leap in the deep end because I was looking after the market garden for about a year while Nick was off, and that was a really challenging time. I think in terms of the CSA project now, it’s partly about having a mix of the right people. The right people tend to come along, and Mel who I work with was one of them. She was really keen on the CSA idea and we decided that we’d just give it a go.

We didn’t really think about it too much. We knew a CSA scheme was wanted round here because Dartington Hall Trust had done community consultation and they found that that’s what people wanted. We knew no-one was doing it and so we thought we’d give it a go. I think by taking that step into trying it and making it happen, a lot has unfolded as a result. We’re still in Step A and still don’t know what step B or C are necessarily going to look like. We have an idea of what we’d like it to look like but we’ve taken that first step and we’re allowing things to unfold and stepping into them as they do.

For me a lot of the time it’s about the other people around me. The right mix of people. I can’t really explain, just feeling a part of a team that have a similar vision of where things could go and all being on the same page and feeling inspired, then you’re not on your own with it. For me, I don’t feel on my own with this project at all, I feel part of a really strong team of 4 people. Then there’s the wider team that’s the volunteers and the members as well. 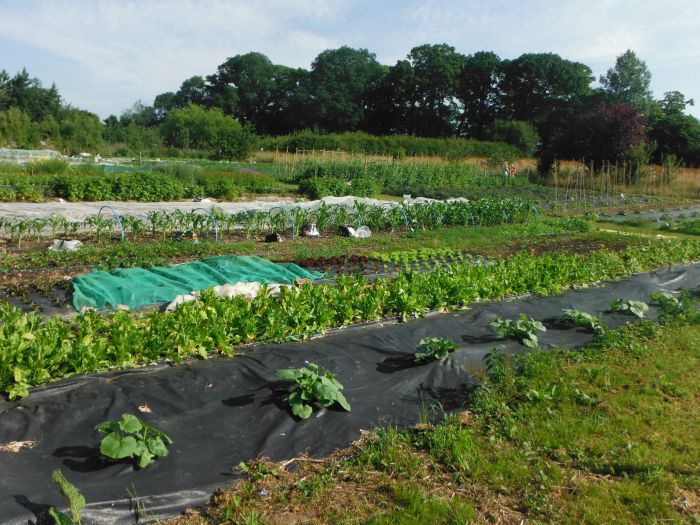 This time last year it was just Mel and I, and we didn’t have that team, but the fact that there were two of us was much stronger than one. We gave each other the confidence. That for me is a big thing.  There is a part of me that likes having something to get stuck into. I like having a project to get stuck into. If that’s not the case then I’ll try and look for that to happen.

It is a frightening thing I guess, because we want to know what it looks like before we’ve started. That’s always a worry, that you never know what shape it’s going to take and so it is a scary thing, leaping into it. And that’s part of it.

Do you find that deciding you’re going to have a go at something has a knock on effect in other aspects of your life?  Do you feel more connected to the place, or that change is possible more than you did beforehand, or feel that there’s more chance of changing things because you’ve had a go at changing things?

Definitely. It definitely shows that things are possible, for sure. In taking that step to set up this project and the fact that it’s still happening and has received a lot of support, it does give a massive amount of confidence that actually doing things like this is completely possible and you can create something like this from very little actually.  Something didn’t exist, and now it does!

It would be so great if we all could create all sorts of different projects from nothing and we’d all inspire each other. I’m really inspired by a lot of the other projects that are happening round here in Totnes as well, and seeing people making things happen. I think it inspires others when you see someone else doing something, and its working then it gives you the confidence that maybe you could too.

I bet there are other people listening who are thinking – I’ve always wanted to do that! What would your advice be to them?

My advice would be:

Mel and I really tried to make this a manageable process. We’re not trying to get to step Z before we’ve done step A because we’ll just wear ourselves out. We’re just doing it step by step.

You can find out more about School Farm CSA on their Facebook page. Finally, here is a short film about wonderful local social enterprise The Kitchen Table, and one of their trips to School Farm to stock up on produce: