I’m very proud to say that on 23 March we held the first Transition Beds, Bucks, Herts conference.  Wow, sounds good.  A dozen local Transition Towns came together to celebrate our successes, inspire the next project and see how the sum of the parts can be greater than the whole.  It was surprisingly easy to organise, and has certainly inspired me to get going with a Transition Streets initiative in Berkhamsted.

We had a previous gathering in October last year, and the idea for the conference emerged.  Organising was simple – the door was open, it just needed a gentle shove.  For the initial gathering last year, all that was needed was to choose a date, book the venue and then send an email to a few addresses found on the web or in my address book, and word spread.  I asked for a small contribution to cover costs and for people to bring food to share, and the job was done.

The conference itself took slightly more organising, as it was open for anyone to attend, so we put together a booking system as well, and organised an agenda.  We used a survey to find out the level of interest and what people wanted to talk about.  I have to thank John Ingleby of Transition in Kings for his efforts in finalising the day, and to Andrew Davies for his excellent facilitation. 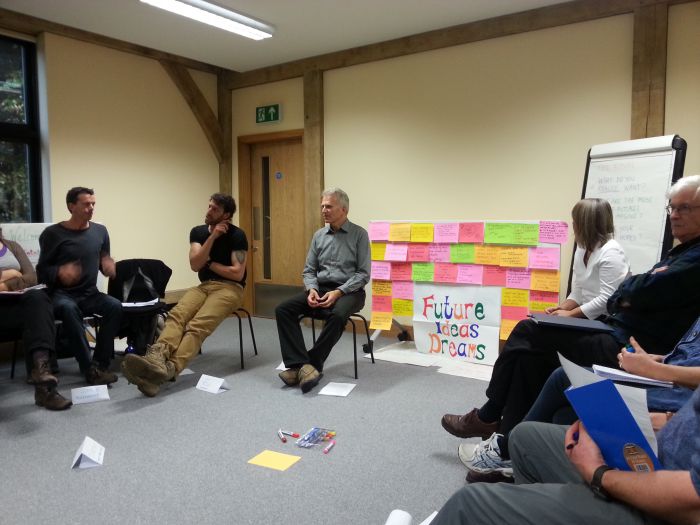 We organised it a bit like Open Space, with pre-defined topics.  We all split up in the morning to talk about community energy, food security and Transition Streets.  I went to the latter, and listened to the great work from Catherine Ross of St Albans and how that could be combined with Street Play – being run in Tring by the eloquent Rob Schafer –  to get people out of their boxes and build that sense of community.  There are now Transition Streets starting up in Tring, Abbots Langley and by me in Berkhamsted.

There was a similar success story with community energy, with Grand Union Community Energy (GUCE, pronounced Juice) of Kings Langley inspiring Letchworth, Berkhamsted (GUCE-B) and Tring (TRICE).  John Ingleby led the workshop, based on the experience of GUCE in raising £72,000 to install solar panels at a local school during 2013.

The project involved a steep learning curve.  GUCE were awarded some additional funds by the Herts and Dacorum councils, which they used to document all the steps they took in the form of an online “Toolkit” rather like an Advent Calendar, where you should only “open” a box after all the preceding steps have been tackled.

The food security chat was run by David Lyons of Haddenham.  A very interesting debate was had about the future of food and how we can engage more effectively with the majority of food shoppers. Should we try and engage more with supermarkets in order to increase the levels of locally grown food sold in-store or would it be more hassle and carbon intensive, due to their current distribution model, than it’s worth? 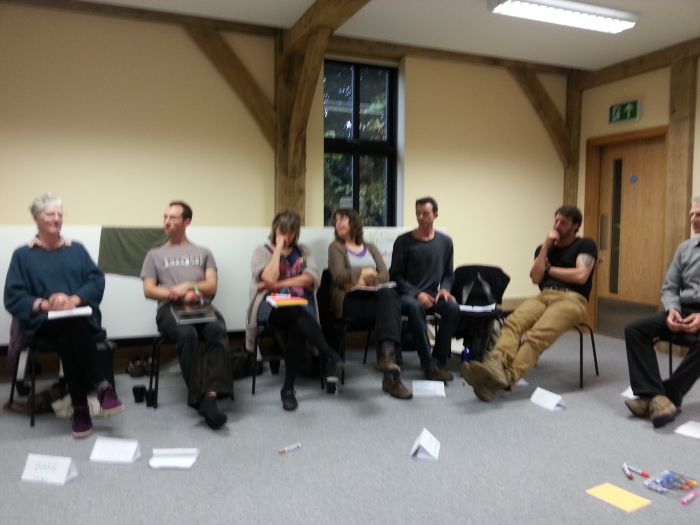 Whilst growing one’s own or setting up a Community Supported Agriculture project on a small scale will help, it will only reach a very small proportion of the population.  It would take a long while to make a significant impact.

We then enjoyed our food and each other’s company, before moving into the afternoon.  The plan had been to split up to talk about personal resilience (aka avoiding burn-out); scaling up the movement; and energy measuring gadgets.  As it turned out, almost everyone wanted to scale up the movement, but felt too time-pressured and exhausted by the prospect, so there was a general decision to hold a plenary on personal resilience followed by the same on scaling up.

I have to say that I think this was a mistake in hindsight, as there were a small number of people who hadn’t the slightest interest in either topic and wanted to see the thermal imaging camera.  I don’t think we had enough time to devote to what really needed to be a more intimate discussion on the stresses and strains of this work.

I think the afternoon was actually a microcosm of the whole movement as I experience it.  We all feel that there is so much to so, and we feel as though we need to do it all, rather than taking our time and doing one thing right.  So my learning from the afternoon was just that – don’t try to take on more than you can cope with, and do a loving, beautiful job on what you do commit to.

Then we moved on to Scaling Up, and a few peeled off with Brian Kazar of Tring to have a look at the camera.  John Ingleby spoke about his experience of campaigning with The Hunger Project (HP) in the 1980s, when people were invited to “sign a card to end world hunger”. In 1984, HP volunteers achieved 58,000 cards signed in three months. Participation in HP increased substantially through these campaigns. While not suggesting Transition should turn to signing cards, there are several valuable lessons for scaling up:

Campaigns with these features are almost always successful (for example, community energy share offers). As when a large group of people light candles from each other in a darkened room, the time to light the last 100 can be less than it takes the first two. 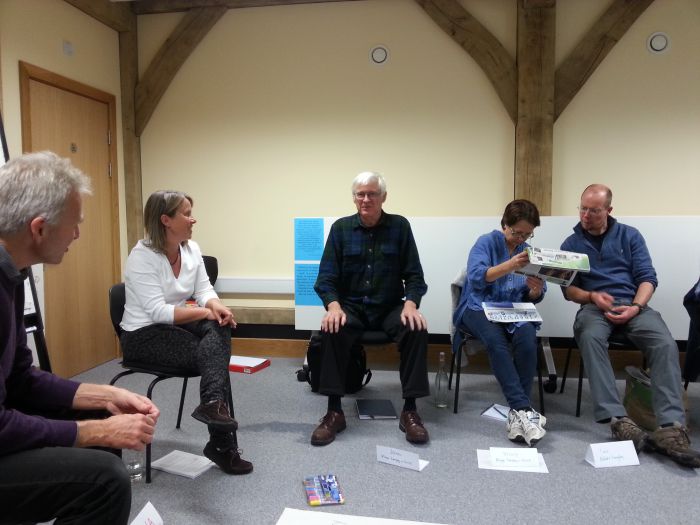 John proposed we should promote the goal of “Zero Carbon by 2030”, and the following discussion explored how this may (or may not) be appropriate for Transition.

Over the two conferences we have made between us a host of very important connections, between each other, ideas and learning insights.  Christine Hopkins said of this conference “Great to be in a roomful of people determined to make a difference, and not just in a small way! Getting together with people from around our region, exchanging ideas and spreading the network, is inspiring and motivating.”

Here’s to the next one, when it is the right time.