What Transition initiatives do is just fantastic. We see “little buds” of ways of living that are more resilient and happy arising everywhere. The question is: how do we go from “little buds”, that are indeed fantastic projects developing outside of the current system, to mature and extensive “forests”, formed by projects which have the right scale to respond to the current challenges we face? It is this question that has informed the decision to create a regional hub and a professionalised support team in French-speaking Belgium. But how did we get there? And how can this team help Transition initiatives to grow?

Why a regional hub ?

While the first initiatives emerged here in 2009 and 2010, the regional Hub for Wallonia and Brussels was created in 2011, after Rob’s visit to Brussels and Nils Aguilar’s tour of 7 cities to present his film “Voices of transition”. These events got initiatives to know each other and start to collaborate. It also became clear why having an organization which is able to speak on behalf of Transition initiatives in the region was becoming increasingly important. 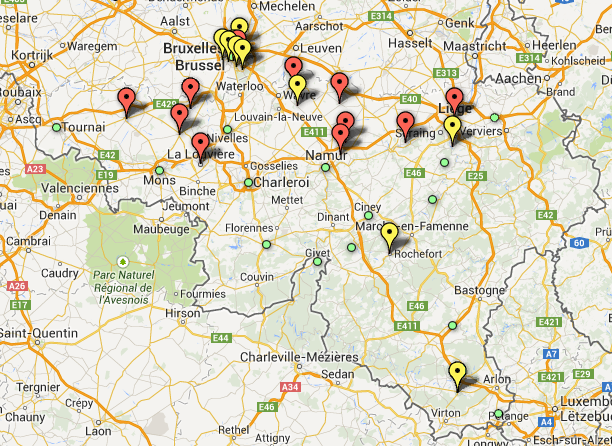 The focus on regional level, which includes initiatives from Wallonia and Brussels, seemed natural in the Belgian context. This level has several advantages, including: a common language, the opportunity to meet quite easily (in only 1 or 2 hours, we can all be in Brussels), closer links to regional political authorities … And of course the idea that localised action, at the heart of the Transition approach, would still be the good one for support structures as well.

But quickly, we faced a fundamental question: How to create and mobilize a support network without absorbing all the energy of the people active in local Transition initiatives? And how to support initiatives in accordance with a bottom-up approach?

Making our involvement in Transition our job

From a personal point of view, in 2010 Transition had become so important in my worldview that I could neither imagine having a job that would not contribute to it, nor confine it to a volunteer activity in my spare time.

I’m a trainer, group facilitator, psychologist, I facilitate change, and I had a few contracts linked with Transition here and there, but not enough to live on. Would I need to create a bakery, shop or become an organic farmer to create a livelihood related to Transition? These activities are eminently useful and important, but do not correspond to what excites me personally for my everyday life. Should I have to do something that did not attract me particularly to create a Transition livelihood? And why couldn’t supporting local initiatives be partly remunerated in a network? Could the solution come from partnerships?

A Partnership with established local NGOs

A particularity in Belgium is that in 2008, a time when there weren’t yet any initiatives in our region, the NGO Friends of the Earth Belgium, decided to promote the Transition concept. They  hired somebody to inform people on the subject and organised a trip to Totnes. That’s how from 2010 on, I started collaborating on introduction trainings.

Later in 2012 , I had the opportunity to be hired a few months for a part-time position, which was an opportunity to begin a collaboration between Friends of the Earth and our young informal network. It was an opportunity to do a needs analysis with local Transition initiatives, to see what they felt would help them. A training program has been successfully implemented to meet these needs. Partnerships have also been initiated with other organisations such as ASPO – Belgium (The Association for the Study of Peak oil) and other associations in our region, including Exposant d. I also had the chance to experience and participate in the “National hubs meeting” in London in 2012. However, I had not paid enough attention to the financial resilience of the programme I had been hired on, and when funding was not renewed, my contract and the program were interrupted. 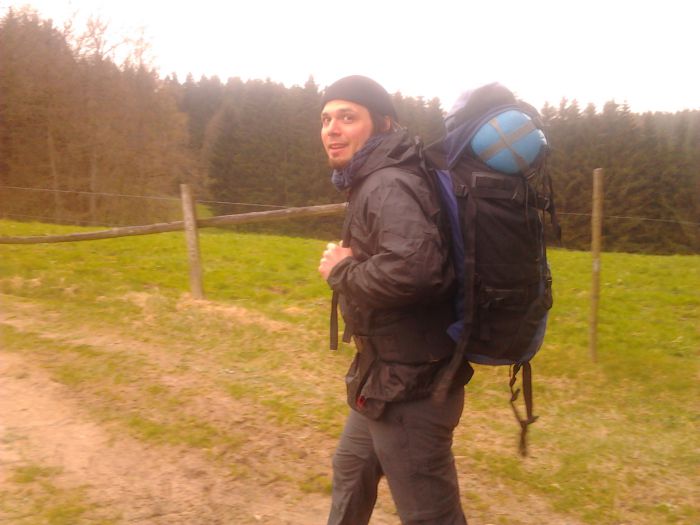 This was not enough to discourage us, though. I write “we” because at that time, Vincent, who has a useful complementary background enters the scene. We have learned the lessons of this situation, and with the help of Friends of the Earth and Vincent from Exposant d, we started looking for other public funding in an expanding partnership. Our actions and what was sown in 2012 have allowed us to obtain new funding from the Walloon regional government for a year. And this time, we were going to be not 1, but 4 part-time staff , with the help of these two associations!

How to articulate our medium and long term objectives and the need to meet our donors in the short term ? What if funding is discontinued after a year again? How to build a quality team with no job security in the medium term? And for this year, what skills would be sought? Who would be engaged? Which selection procedure? How to collaborate between these two associations and the network? How to sustain the project?

The birth of a support team

Our objective was to develop things organically. From an analysis based on needs conducted in 2012, and observing changes in the Transition Network, several priority areas were identified for the project:

On top of this, to increase chances of continuing our support project, a part-time fundraiser was hired.  As Vincent and I had been developing the project, of course, we would be part of the team later in the project. Our work focuses mainly on inspiring people, training, inner transition and providing support to local groups. But there were still two vacancies for supporting resilient economy projects, and communications & fundraising. How should we proceed? How to find people who would complement us well ?

We wanted to really respect the principle of transparency with initiatives and to have male and female presence, balancing the team. A selection procedure has been implemented in collaboration with volunteer members of the network and the two partner NGOs. Job descriptions and job announcements have been drafted and published. We interviewed the candidate(s) and Ralph and Antonia were hired.

From the day of the decision, we asked them to participate as part of the team in a four-day workshop of “The Work that Reconnects”, that would take place shortly after the start of their contract … Why participate in such a workshop? And how would we build this team to embody the  daily values we want to promote? 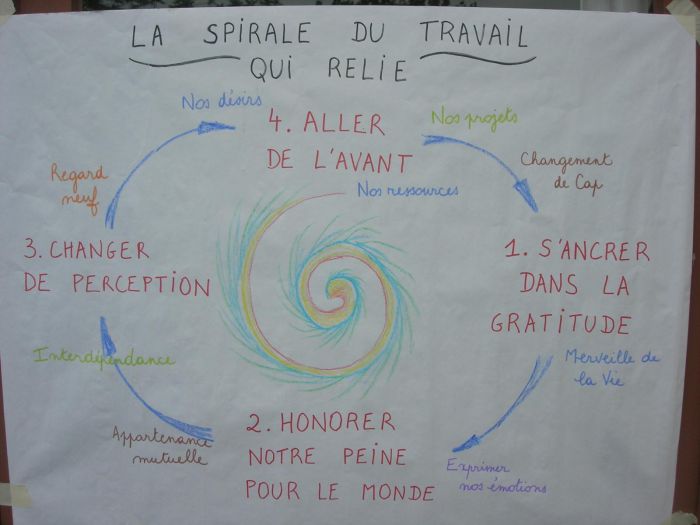 The participation in this workshop made it possible to lay strong relational bases and to anchor the collective consciousness that the transition is both an inner and an outer process. It also helps us continually because we know that we can give and receive the support necessary for each one of us in the group. This wish for consistency and resilience has also led us to ask the following question: Can we really bring about change by replicating mechanisms of the dominant culture that pushes us to do more and more, faster and faster?

The truth is that it is so difficult to take the time to slow down, while the challenges we face seem so huge … Balance is hard to attain and we really experience this difficulty every day while trying to reach it.

We wish to apply these rules in our work both within our group and in the relationship with the initiatives we support. We are careful not to overwhelm them with our questions and projects, which could just exhaust them. An appeal has been launched and we have identified some people that are available to give us feedback. All initiatives were also contacted in order to see where they are standing at the moment. Four subregional networking meetings between local initatives are planned for the end of January. This will be a great opportunity to raise awareness , build positive collaboration and improve the structure of the network in our region.

However, resilience is also built in other areas , with the following question: how to secure funding in order to develop a vision and actions in the medium and long term?

Our idea is to start small, to sow abundantly and see how every plant, every tree, will adapt to its context. To identify those who grow more easily and help initiatives to grow in good conditions.

For example, after the ” Inner Transition” training with Sophy in London, we started two pilot Inner Transition groups , inspired by the “Macy Mondays ” set up by Debbie Warrener in London. These groups are active in Ath and Liège, but are open to people working in other transition initiatives. In a second step, we will create work sheets and practical training will be set up for those wishing to start other groups.

Another of our actions in progress is the development of a training system, inspired by the model of the Transition Network. Several members of Transition initiatives in our region participated in the last Train the Trainers Training which took place in Belgium, end of last year.  We are modeling the trainings to adapt the content to our particular cultural context and the analysis of the needs we had carried out. Besides the “Launch” and “Thrive” trainings, we are developing trainings on group dynamics, inner Transition, permaculture and transition, the ability to speak in public, collective intelligence, and so on. 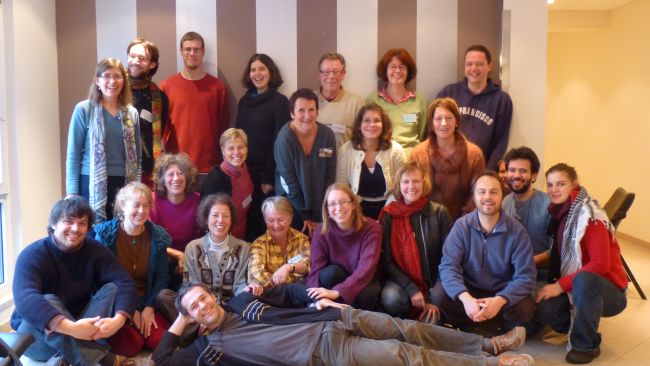 We also identified three projects that will be developed as pilot projects with the aim to make them replicable models for other initiatives:

But is all this realistic? Are we being too or not enough ambitious? And would it really support the evolution of our transition initiatives ?

Stay at our place

We remember regularly (and I am personally very attentive to this) that our role is rather to catalyse than to develop a lot of projects by ourselves. They must be able to be disseminated and replicated without being dependent on the support team. In this sense, we must design for our own obsolescence. Because if one day there was no more funding for a support team, or better, it would not really be necessary anymore, it will be important that initiatives can continue their way without us.

For this reason, we are not a “secretariat” of the initiatives or for the network, that would eventually become indispensable and could thus “capture” the initiative of volunteers. Our current position is rather beside the initiatives and network. We are not the Transition Network Wallonia-Brussels, which is currently being co-created together with the local initiatives. We are here to support, observe what is happening and act modestly and organically. Our role is not to force things to always go faster, but to provide appropriate support where they could get better.