Milwaukee was the last stop on a tour that in 18 days had taken me to 12 different places and deliver 19 different presentations.  I didn’t know much about the place before I went, but I have to say that it is quite possible that I saved the best until last.  The two days I spent in the city were fantastic, due in no small part to the organisation of Transition Milwaukee, and to the great stuff already underway in the city. 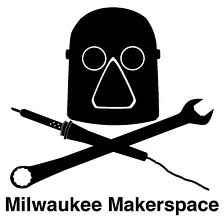 I arrived at about 8pm, and went to the Milwaukee Makerspace where I was welcomed to Milwaukee by the students of the Transition Launch training that had just finished.  I was made to feel very welcome, plied with chocolate brownie and ice cream, said a few words and met lots of lovely people.

Next morning was the ‘Brew City Abundance Tour’, billed as:

“a magic low carbon carpet ride of some of the most innovative and unique local examples of how to create resilient and resource-abundant urban systems within 10 miles of your locale!”.

It did not disappoint. We started out in the offices of Habitat for Humanity, who have built over 525 affordable homes for local people in some of the city’s poorest neighbourhoods.  Their focus is on the Washington Park area of the city, which has a poverty rate of around 40%.  As well as building homes, they also work to address issues around crime and safety.  They have built over 500 raised beds for residents, while another great local project, the Victory Garden Initiative, provides the training.

We then heard from the Mid West Renewable Energy Association, which acts as a clearing house for information about renewable energy, hosts an annual energy fair and runs a wide range of training. 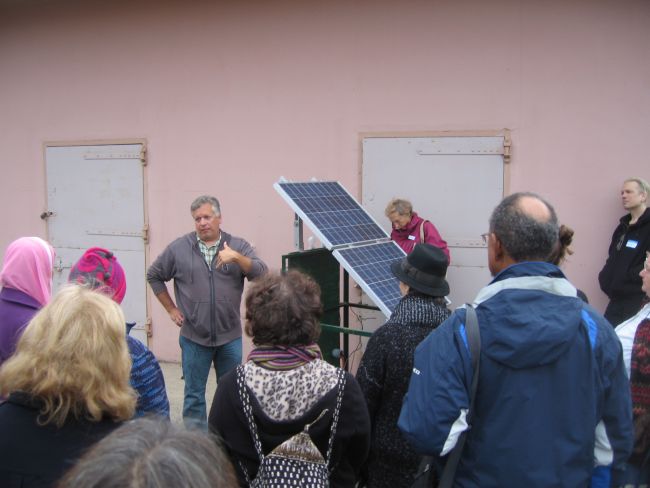 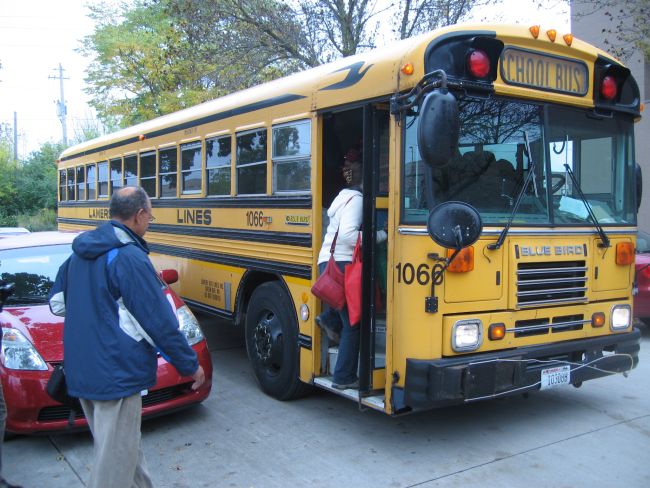 Our first stop was Kompost Kids, a community composting scheme, working with different groups to raise the profile of composting in the city. 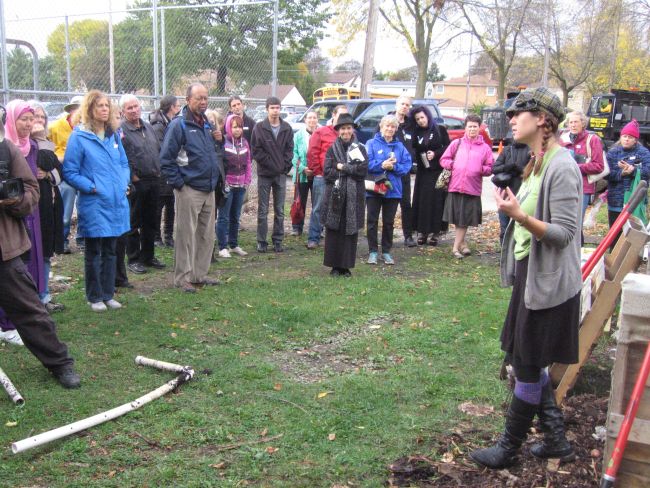 The good folks of Milwaukee River Greenway came along to tell us about their work looking after the river, taking regular sampling of water quality, lobbying for the water to the cleaned up, and for more public space along the river.  The Greenway itself is 878 acres of trails and greenspace along the river where it runs through the city.  It’s a beautiful space, great for walking, hiking and biking. 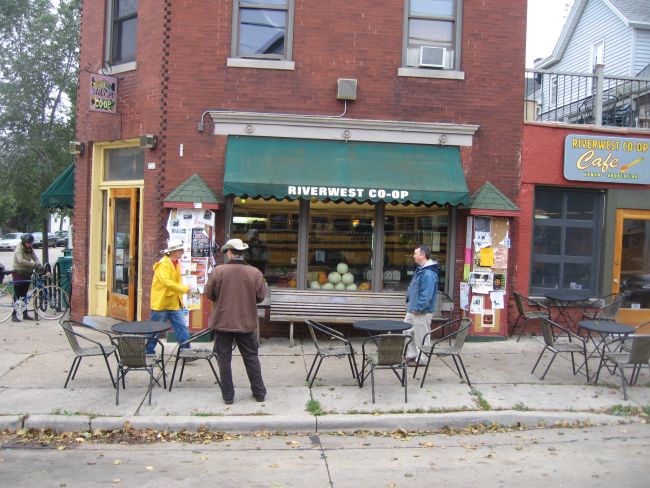 Our next stop was the Riverwest Co-operative, whose shop is a great beacon of local food and co-operative values.  The co-op is a neighbourhood corner store committed to organic, fairtrade and local produce.  The shop is mostly staffed by volunteers, and their hundreds of members get a 5% discount on their shopping.

We also heard about the Riverwest Cooperative Alliance, a team of cooperative organisations dedicated to creating an equitable and democratic economy in the area.  They offer training, support for emergent co-ops and put on events promoting the co-operative concepts.  Lastly, we heard about the Milwaukee Area Time Exchange, a Time Bank in the city that has been running for 4 years and has many hundreds of members.

Then it was off to Walnut Way, in the Lindsay Heights area of the city.  The Walnut Way Conservation Corp was set up by Sharon and Larry Adams in 2002 with the aim of improving the quality of life in the area.  Sharon had grown up there, remembering it as a diverse community where people sat on their porches and community spirit was high.  When a new highway was built, resulting in many homes being pulled down, the place was forgotten, and drugs, prostitution, poverty and crime took hold. 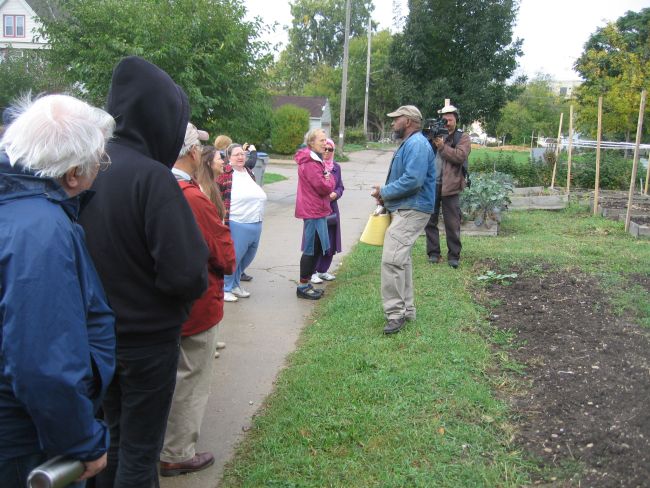 Since Walnut Way was founded, hundreds of new homes have been built or renovated, a number of urban gardens have been started, water conservation projects have been installed, and young people from the area are being trained to become urban farmers.  They have ambitious plans to significantly step up their urban food production, in order to really address issues around food poverty that blight the area.  They were a very dynamic and inspiring couple. 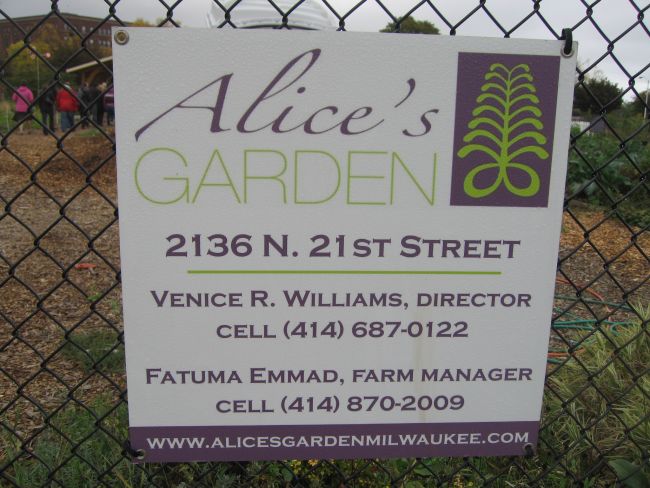 Alice’s Garden, an urban farm and community garden has been in existence for 40 years, and hosts 113 family units and organisations who rent plots to grow food.  Gardeners include people from 21 different ethnicities, and the project includes 12 different onsite programme and projects.  During the year, over 600 people volunteer on the project.  It provides food for the participating families, but also supplies for 3 corner stores, 2 grocers, 6 local chefs and 3 local restaurants. 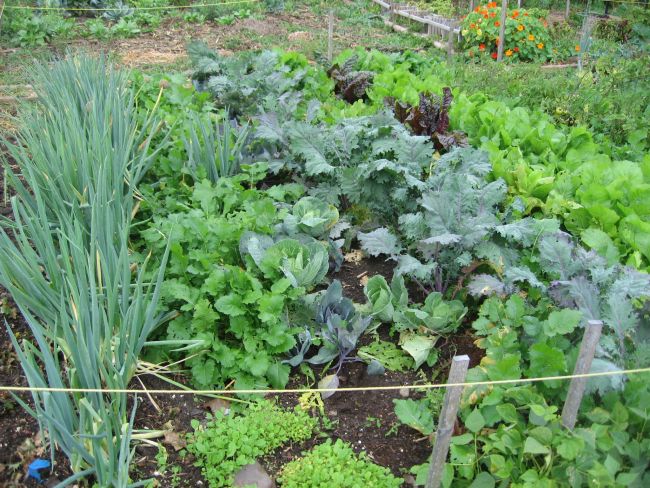 The site also features a beautiful timber-framed covered space, used for all kinds of events and functions.  A walk around the site identifies a wide range of gardening styles and choices of plants.  One of the key roles it tries to perform, according to one of our guides, was to engage young Afro-American men in urban food production, so as to set good role models for others.  As our guide said, “this is one of the most effective ways I’ve seen of growing community”. 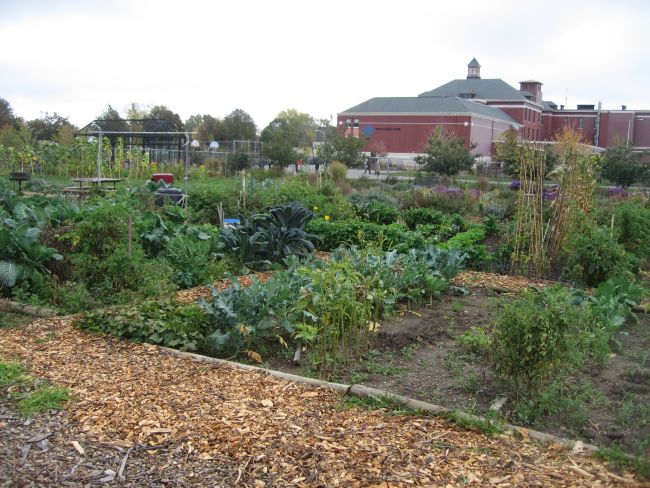 But the cherry on the cake for me was the tour’s final stop, Growing Power.  Growing Power was once the last working farm within the Milwaukee city limits, with historic greenhouses and other infrastructure, all on a 3 acre site in one of the city’s most deprived areas.  They have sites in other cities, but their Milwaukee site is an amazing showcase of aquaponics, the integration of fish production and vegetable growing.  Here is a great video about it, featuring its founder Will Allen, who unfortunately wasn’t there the day we went:

It’s a huge success.  During 2012, Growing Power had over 30,000 visitors, over 5,600 volunteers, trained 1,700 young people to become their own urban farmers, harvested more than $750,000 worth of produce across 200 acres of growing spaces, harvested over 600 lbs of oyster mushrooms, raised 50,000 fish and much more.  They run a number of food stands and markets, supply restaurants and grocers, trainings and all manner of other innovations. 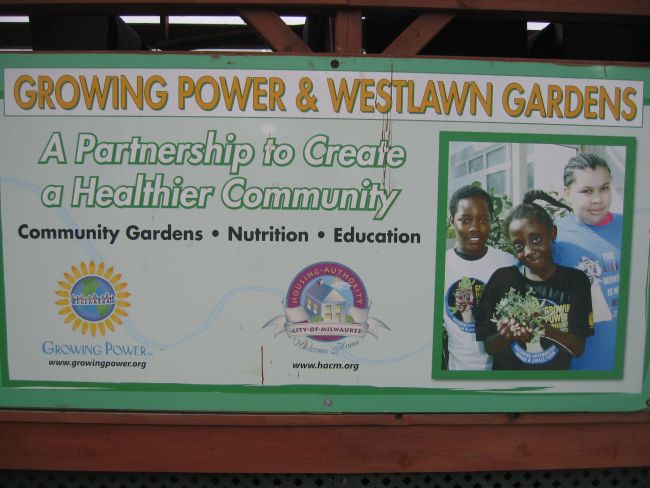 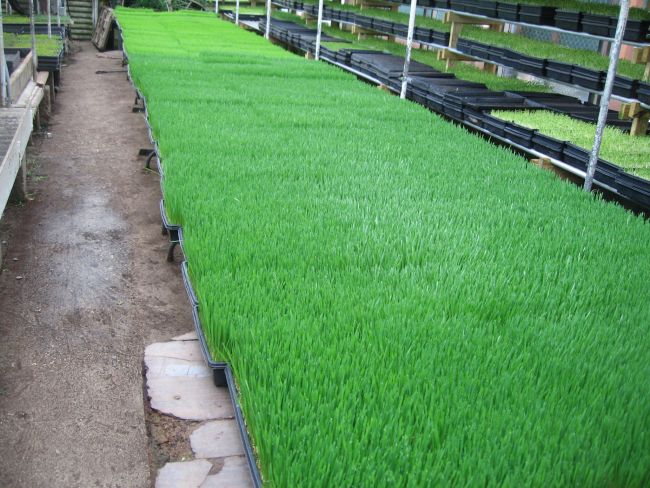 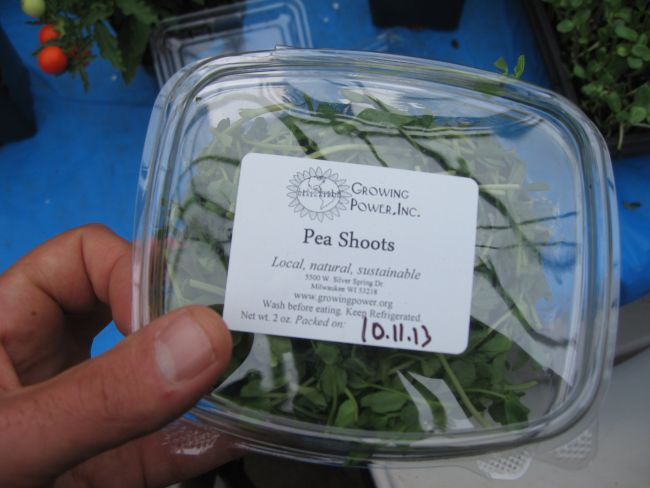 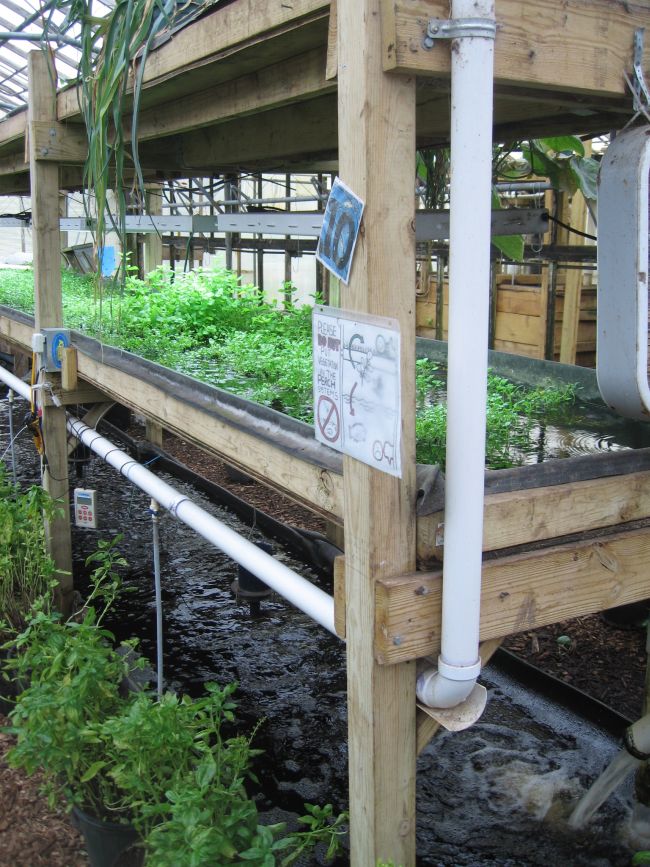 It’s a fascinating tour too.  Based in the six greenhouses, a series of pond containing different fish species produce nutrient-rich water which is them pumped through a series of shelves on which food is grown in trays.  They grow huge amounts of sprouts such as wheatgrass and pea shoots, which are in great demand.  It’s almost year round, and very productive.  The tanks teem with different varieties of fish (mostly Tilapia, Lake Perch and Black Pacu).  Outside food is grown in more conventional tunnels, and millions of worms are bred every year in their worm composting beds … 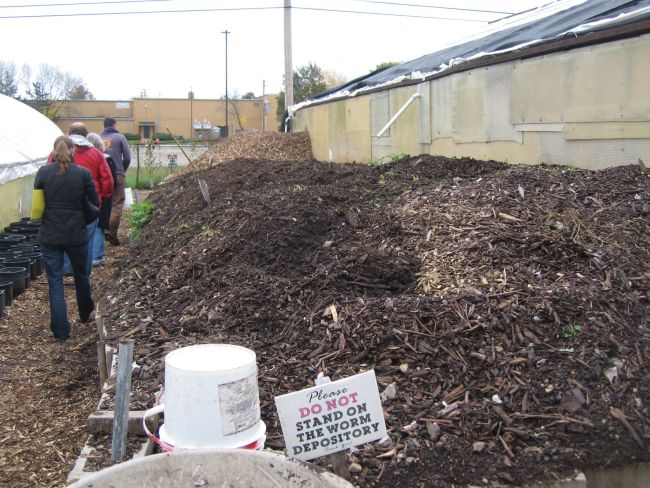 Outside there are goats, sheep and chickens. There are bee hives … 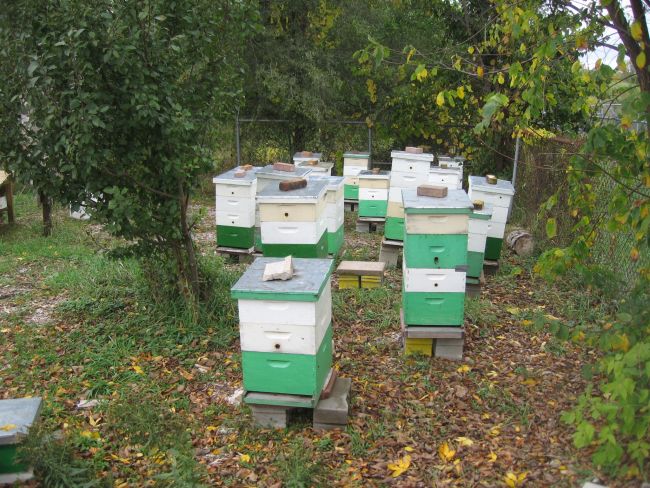 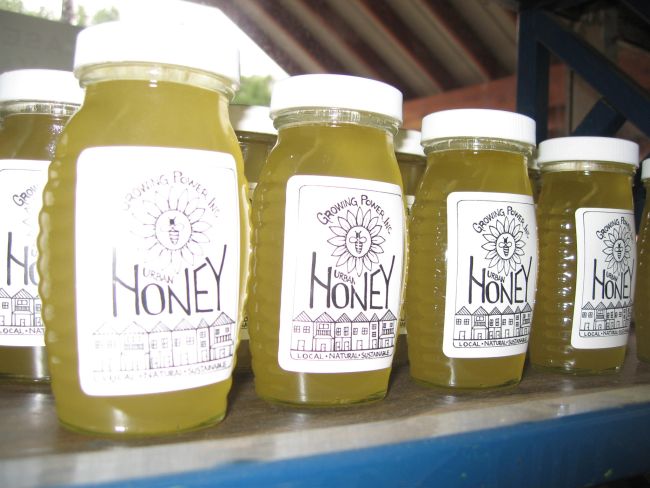 It’s a deeply impressive example of urban agriculture and intensive urban food production and job creation.  That was the last stop on our tour.  I then had to whizz off to do an interview for a documentary about local food, and then had a bit of downtime before the evening’s event. 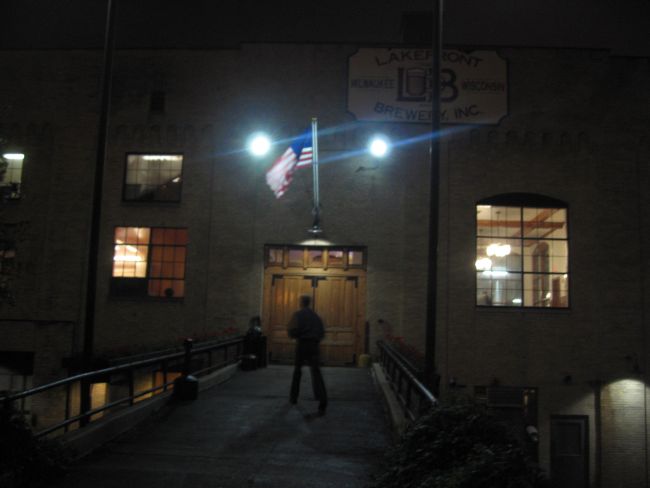 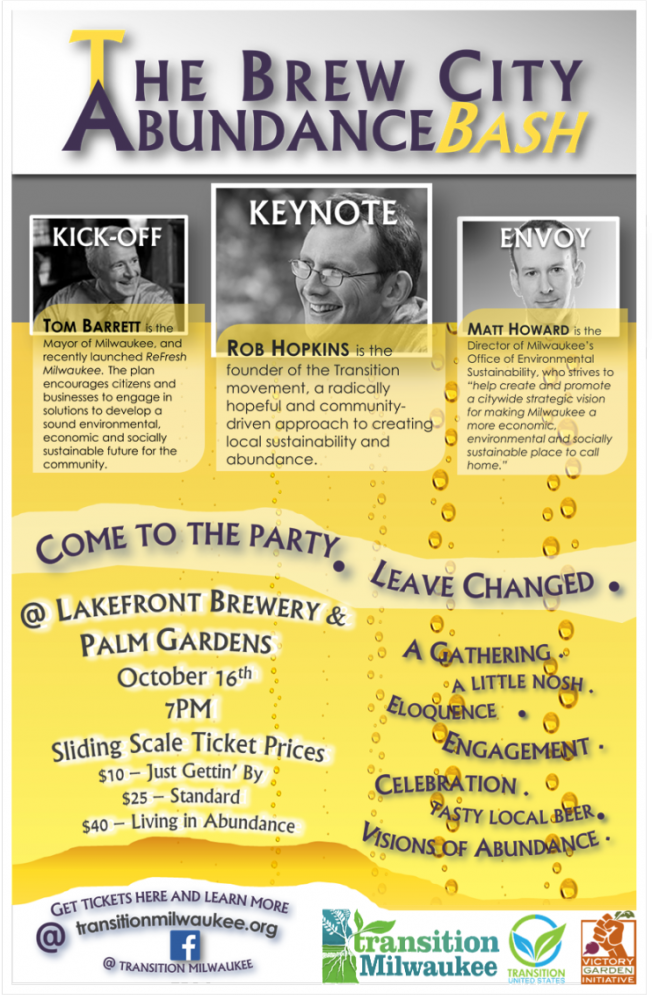 Billed as ‘The Brew City Abundance Bash’, the evening’s festivities were hosted at the Lakefront Brewery, a great craft brewery which has won awards for the energy efficiency and other ‘green’ measures it has taken.  Very fitting.  The evening began with Matt Filipiak leading a rendition of his song “It’s no Milwaukee”.  Then the Mayor of Milwaukee, Tom Barrett got things underway, talking about the many things that the City Authority is doing to promote sustainability.  It was clear that the committment to these issues, and his admiration for the work of Transition Milwaukee, runs deep.

Then Matt Howard, who works with Tom as Director of Milwaukee’s Office of Environmental Sustainability talked about, ReFresh Milwaukee, the city’s first sustainability plan.  Its website states that it:

provides a vision for community sustainability over the next 10 years and seeks to make Milwaukee a center for sustainability innovation and thought leadership.

Then Felicia Hobart and the Hive sang a song about bees, and Ken Leinback of Milwaukee’s fantastic Urban Ecology Centre shared, with great audience participation, his story about when he realised that we needed to do something about the environment rather than just talking about it. 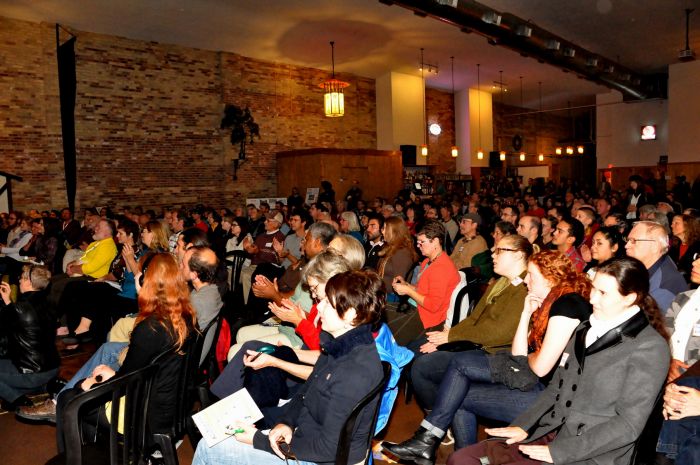 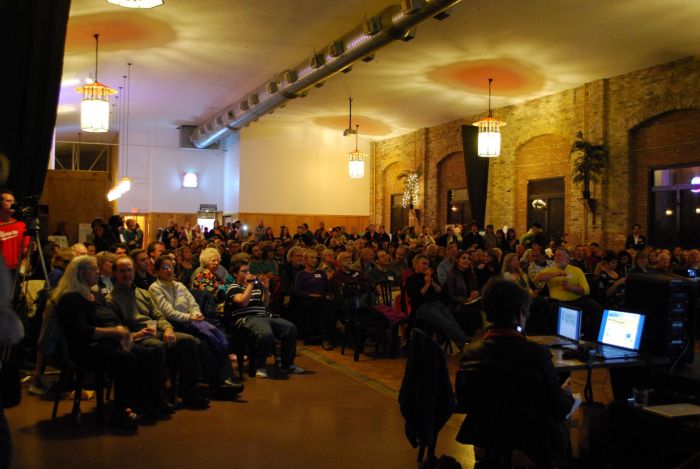 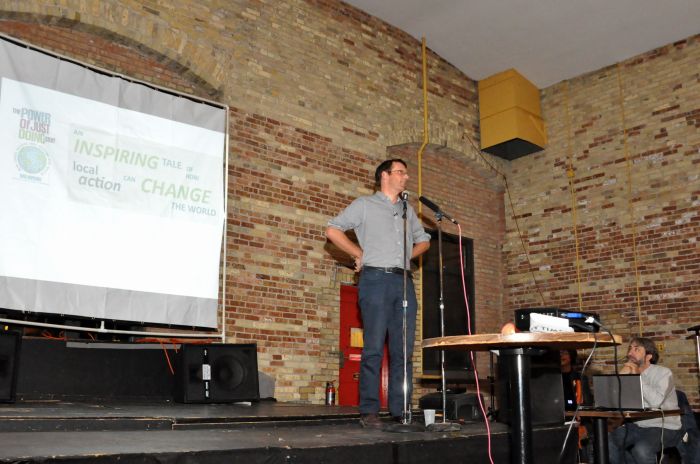 Then it was over to me.  It was my last talk of the trip, and luckily my voice was still holding out.   The talk went down very well, with an amazing crowd packing the place out, must have been well over 400.  It was very enjoyable, and was followed by lots of book signings and meeting people. 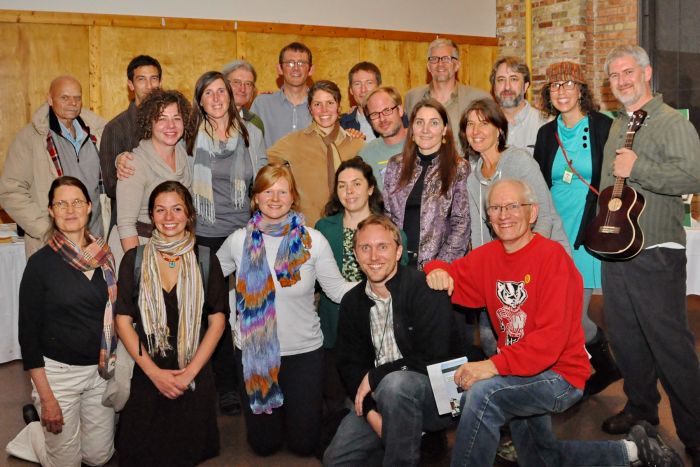 As is now customary, while there, with help from members of Transition Milwaukee, I asked people involved in the group what, for them, is Transition?  How would they describe it?

Also, why do they do it?

That evening’s event was really glorious.  I’d say at least 400 came, standing room only at the back of the hall. A great ending to the tour.  On my last morning there before heading home, I went to the People’s Book Co-operative to do a couple of interviews, and then visited the Great Lake that sits alongside Milwaukee, which holds 20% of all the fresh water in the world.  Never seen a Great Lake before, so that was a great thing to do before I left.  And with that, I was off, heading for home. 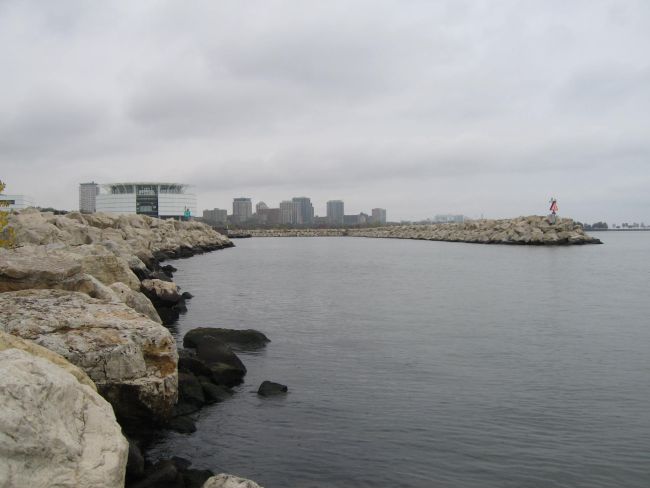 It’ll take me a while to digest it all, but I’d like to thank everyone who organised it all, especially the good folks at Transition US and Post Carbon Institute, especially Carolyne, Maggie, Marissa, Asher and Desiree, as well as all the great people I met on the way, all my hosts, and everyone in the Transition groups who had spent so much time putting on such great events.  And Amber, for all her great co-ordinating skills.  And whoever it was who made sure my suitcase, which was lost on my return journey, was eventually found and returned to me.  And Carol Kraco for use of three of her photos above, and Tom for ferrying me around Milwaukee talking about music. Thanks all.