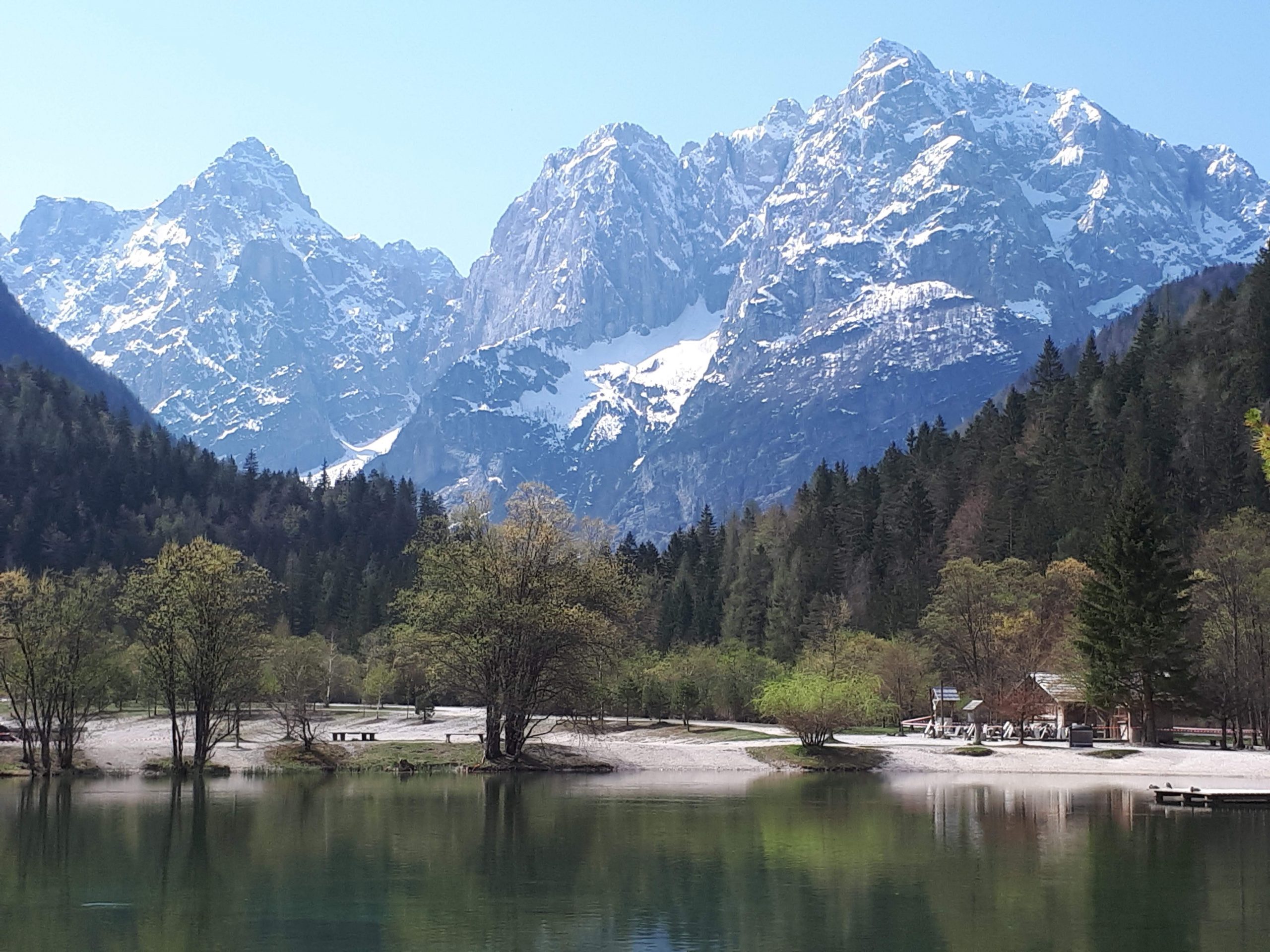 Continuing our Covid-19 lockdown reflections, Melita Djurić of Transition Slovenija shares her experiences with us.

Our local group Dovje–Mojstrana: Green Future is small in number but was an initiator of the Transition Slovenija Hub in 2015. Our main priority is ‘local’, and we have been performing it with motivation and joy through our volunteer work, social contacts, and various activities from 2014. However, we do miss fresh ideas and younger people to realize them and to bring fresh wind. We are a group of pensioners mostly, and are getting a little tired.

During the Covid-19 epidemic our group couldn’t realize the plan for Earth Day due to the lockdown restrictions. In the interest of preventing the spread of the disease all Slovenes understood the ban on gathering. Our group found ourselves in a new and strange situation after the change of government on March 3, during the epidemic. We never discussed political issues or affiliations before, but the new government soon issued the first package of measures and they affected all environmental/ecological groups in Slovenia (from Greenpeace Slovenia to Fishermen Association). We kept our Facebook page active and responded to new circumstances by posting current information and fears about the disease, nature, and society. 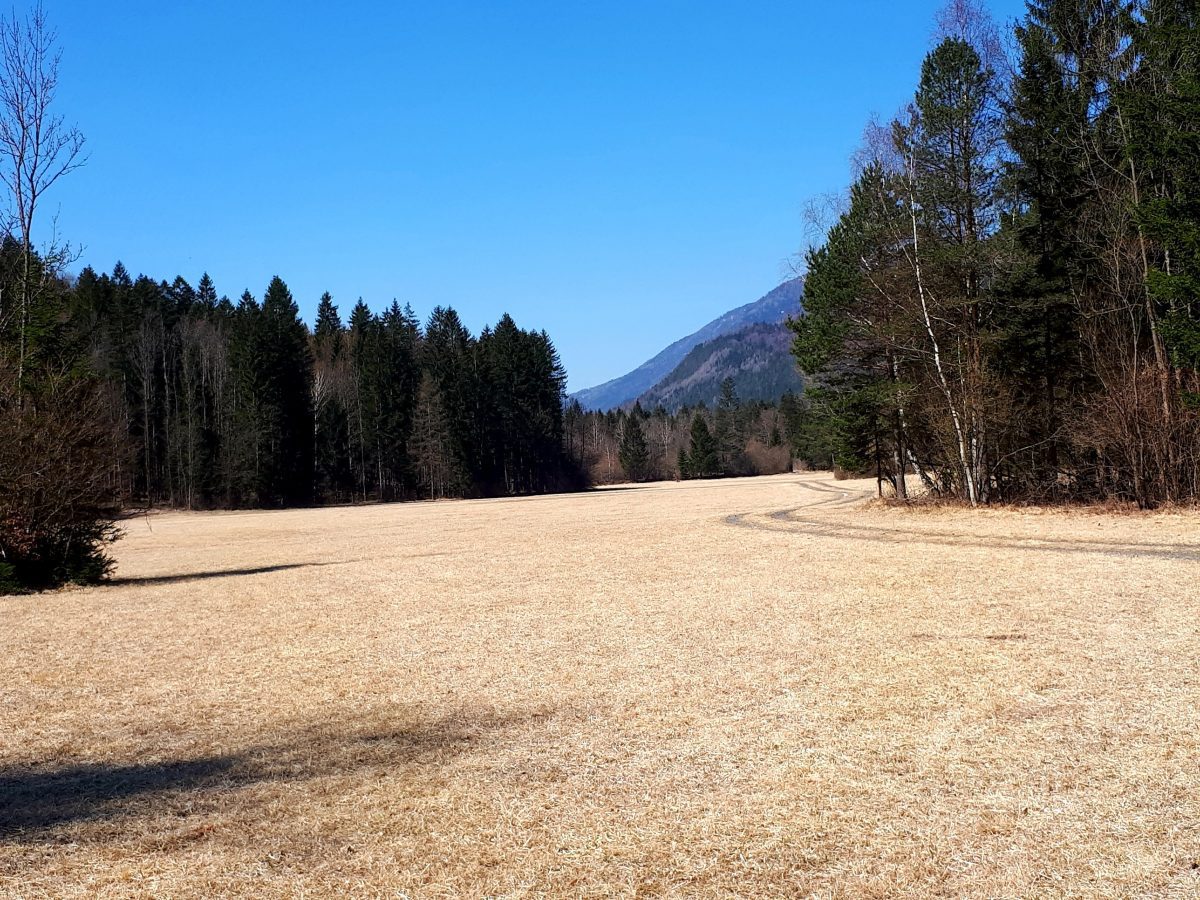 Changes of governments are democratic and good. The new Slovenian right-wing government consists of ministers we have known for 20-30 years. Their rhetoric was becoming more and more extreme over the years, but we hoped the critical period during the epidemic would make them think of the welfare of people. No, the very first measure was an increase of their salaries as they were working ‘day and night’. A special group started producing packages of measures which were introduced into life immediately. They concerned military, police and economy aspects mostly. The social aspect was also included but did not cover all groups who were affected during the epidemic (cultural workers, temporary job holders) or included illogical financial support (e.g. for pensioners, students). It soon became clear that the main purpose was to get the votes of the electorate.

Under the guise of fighting the disease, the construction projects which we are told are ‘very important’ for the economy of the country (hydropower plants, new motorways, widening the existing ones, etc.) can no longer be obstructed by environmental groups or bodies if their membership lists don’t include at least 50 people/members who pay their membership regularly. The complete domination of capital over general values (what are they?) was soon obvious. Several attempts of the government to bestow policing powers upon the army units stationed near the border with Croatia, which is the EU southern Schengen border as well, has not been realized (yet). We kept asking ourselves how these measures help to fight the disease and realized at the same time that every level of our lives was becoming more and more controlled. Besides, journalists found proof that some ministers were involved in corruption activities while procuring medical equipment. Constant pressures on social behaviour patterns contributed to the combination of feeling astonishment and fear – all these during the first month of the new government. 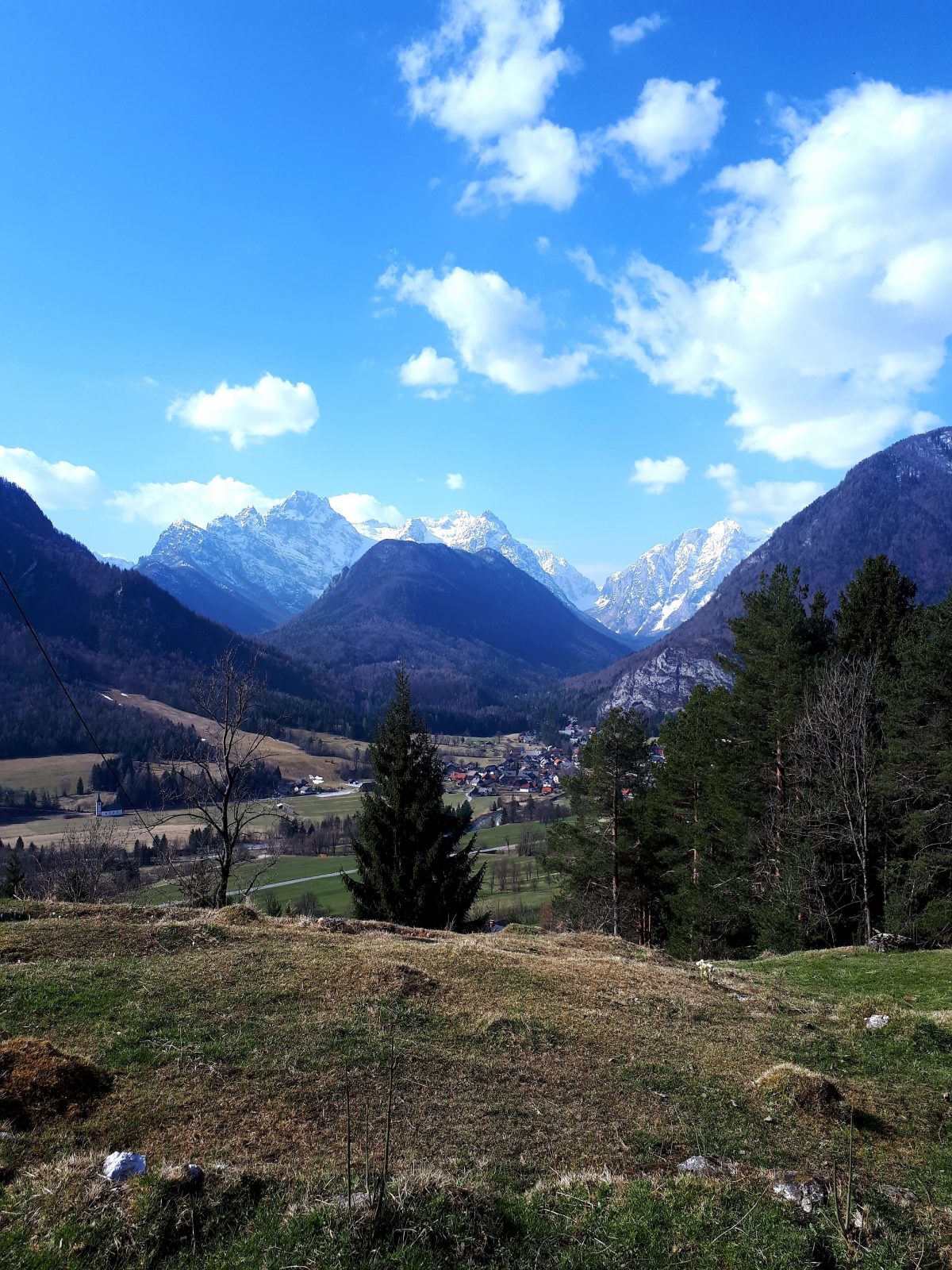 Let me illustrate different times. The ending of my family name –ić indicates that my father was from an ex-Yugoslav country. Lots of mixed marriages were normal in Yugoslavia but lately my family name may be understood as non-Slovenian and therefore ‘unpatriotic’ by right-wingers. I am neither right nor left oriented, but my family name makes me appear left, pro-Yugoslav and anti-Slovenian. Complete generalizations and simplifications! I used to be on Twitter but am not anymore; some people responded to my family name with insults and did not care about the content of my tweets at all. All family names which end in –ić on Twitter were/are attacked and insulted by anonymous writers (Go home where you come from. You do not deserve Slovenia.)

Since people gathering was not allowed, bicycle demonstrations started in the capital of Ljubljana in April. Cyclists were circling along the streets around the Parliament but strong police control forbade them to stop in front of the building. The main goal of demonstrations was to protest against corruption of the ministers first, but later demonstrations continued and are now spread in other places in Slovenia. Government representatives call the protesters ‘left-wingers’ (combined with insulting expressions) but my daughter and her friends and my friends are also among them, and they do not belong to any political extreme. Every Friday at 7 p.m. protests continue on bicycles and on foot, and their main goal is to achieve the resignation of the government due to the autocratic running of the country. 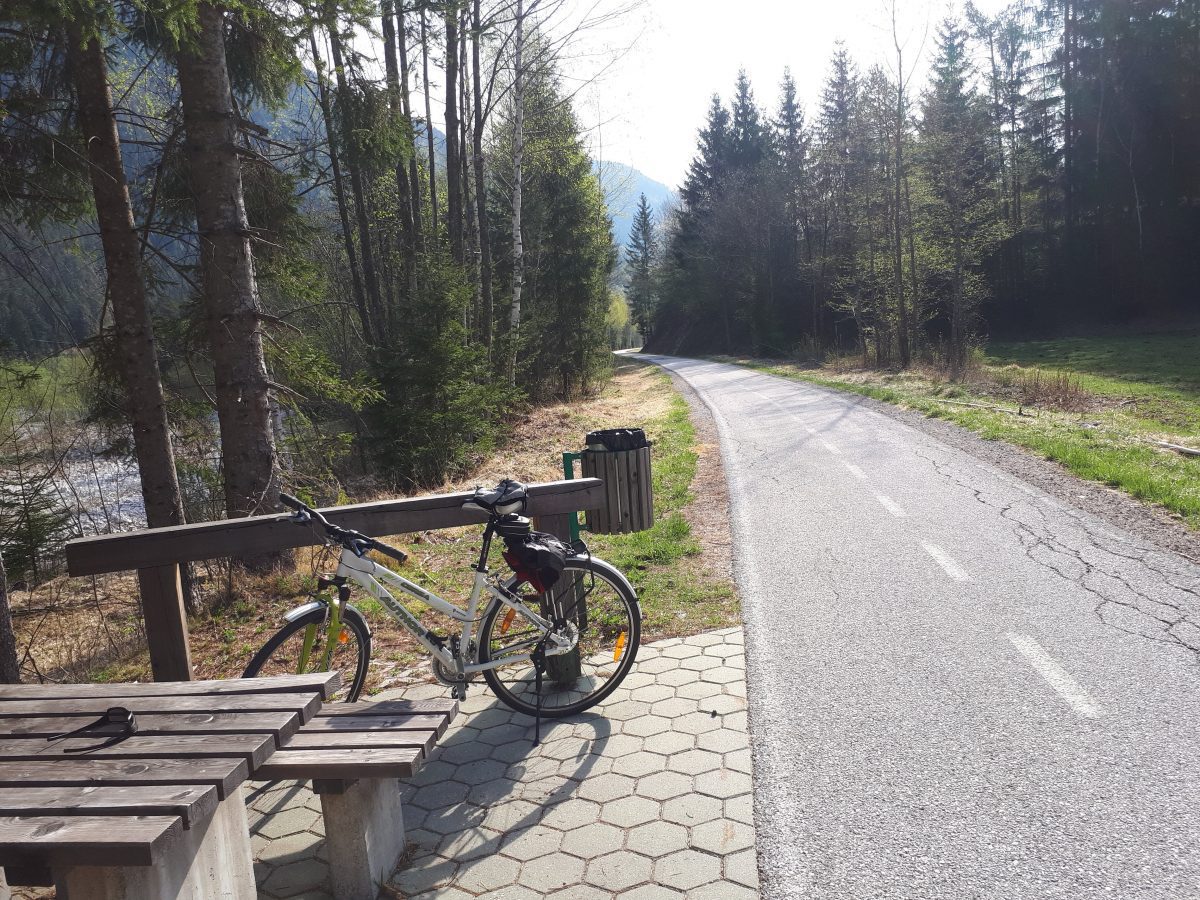 This sad situation is not about politics anymore as it reaches everybody in urban and rural areas. It is tragic to face a deeper and deeper split both at the national level and within local communities. Facebook is widely spread in our community (2.000 inhabitants). During the lockdown lots of posts reflected people’s political orientation and now we meet each other on the streets with new and strange feelings, but do not speak about them. Our Green Future group is considered to be left-wing because we shared Facebook posts and calls of some protesters to preserve nature instead of building hydropower plants. Everybody can listen to the statements in the media and read numerous tweets being posted on a daily basis by the Prime Minister and the Minister of the Interior. They both follow Trump’s model on Twitter, the primitive, threatening, and misleading communication. We can read online harassment of individual journalists, and a large part of the public media is continuously attacked as incompetent and biased.

I miss the culture of dialogue, tolerance for others, listening to different opinions.

I miss the culture of dialogue, tolerance for others, listening to different opinions. What matters now is political strength and insulting everybody who doesn’t share the current political orientation against migrants, environmental issues, modern culture, partisan history 1941-45, red communist star. These issues are in line with the government mentality and contribute to deepening the division of the people.

The health aspect of Covid-19 seemed to be managed well at first, but the public media later discovered that 80% of deaths (all 105) were in nursing homes and that corruption was supported by some ministers. Discussions are going on about who to blame, but taking responsibility or resignation from any of the political positions is unrealistic in these times. The economic and social measures have also won public and political approval first, but later the reality of the packages were not as advertised.

From 1st June the epidemic is officially over in Slovenia. The borders with neighbouring countries are slowly opening, public transportation limits the number of passengers but it works. Our place Dovje–Mojstrana is tourist-oriented, it respects and promotes green nature. Hikers, climbers, backpackers, families from all over Europe used to visit us from every May to October. June has not brought them yet, and our place is not the same without them. After 15 June the government will issue tourist vouchers for 200EUR for everybody over 18 years old. Their purpose is to encourage Slovenes to spend their holidays in Slovenia. Let tourists bring new optimism soon! Yes, the old material in the Green Future has got tired and depressed through these last months.

US Transitioner Beth Lively shares her reflections on what l...