Here at Transition Network, we are always on the lookout for innovative tools for enhancing local economies, so here’s a fascinating initiative underway in Dorking in Surrey.  Mary Portas, ‘Mary Queen of Shops’ and creator of the recent ‘Portas Review’, visited the town recently, guest of Transition Dorking, as part of the build up to the launch, this Saturday, or their ‘Golden Ticket’ promotion.  It’s an inspired idea for boosting the local economy in the run-up to Christmas, encouraging people to get behind the town’s independent traders, an approach that could be adopted in many other places.

If the words ‘Golden Ticket’ bring to mind Wonka-esque unwrapping of chocolate bars, think again.  Transition Dorking describe the scheme like this:

The Dorking Golden Ticket event is based on a very simple model. All participating shops are invited to choose a minimum spend and a prize for the day. At the close of business on the 9th November all participating shops will draw their one golden ticket and a winner will be chosen. Transition Dorking will publish the winners on this website and the Dorking Advertiser will also carry the information.

I spoke to Sally Elias, who is one of the key drivers for the initiative, who told me that initially one of the key discussions the group had had was around whether or not they should be promoting consumption and consumerism.  She told me:

“Although Transition does not promote consumerism as such, we are acutely aware of the fragility of many of our local independent businesses.  Many of them tell us that without a boost this Christmas they may not be here next Christmas.  As a Transition initiative we strongly see the importance of supporting our local economies.  People often feel they need to leave Dorking to do their Christmas shop, assuming that some key things they need they won’t be able to get in the town.  What we’re saying is “Try Dorking First”, have a lot of fun while doing it and support your local traders”.

The Golden Ticket has proved a dynamic tool for inspiring great creativity in the town.  Traders have been asked to offer a “prize that money can’t buy”, something imaginative and playful.  One barber, who also makes short films, is offering the opportunity to cut his hair, and also to appear in one of his films. 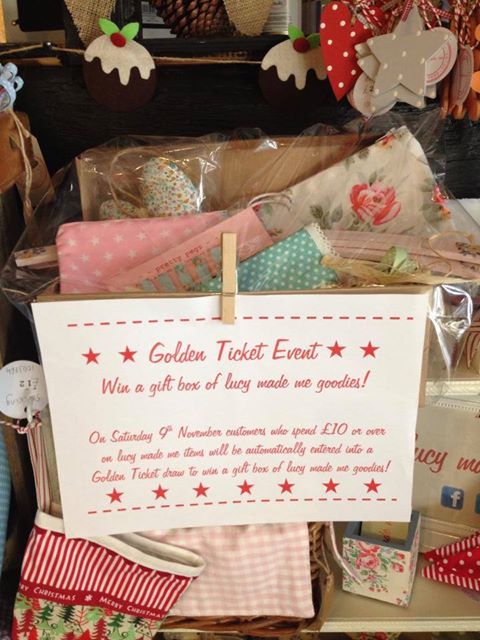 A furniture repairer is offering either a few hours of his time or to teach people some of his skills so they can do it themselves. You can see the other prizes being offered by other traders on the Golden Ticket Facebook page.  The local Council have even agreed to waive the parking charges in the town for the day!  For Sally, seeing this depth of enthusiasm for the project has exceeded expectations:

“What it has really brought home to me has been hearing how much people love this place.  It is different, it is distinctive, and that matters to people.  Once people understood the idea and the word got out there, it’s been amazing to see the reaction, the degree of support, and the creativity that has been unleashed”.

Currently 40 businesses are signed up to take part, more joining every day.  This weekend’s event will be launched by local MP Sir Paul Beresford, who will be going walkabout and doing his Christmas shopping in the town.  When asked for her advice for other Transition initiatives who might like to do something similar, Sally’s advice was to just go for it:

“We deliberately designed this to be as simple as possible.  We wanted something that didn’t take 40 minutes to explain, that people could quickly grasp and could see the advantage of.  If anyone anywhere else wants to do this I can only recommend it, it has been an amazing experience, and also a great way to build connections and contacts across the town”.

We will follow up and see how the experiment went.  If you have any questions, or would like to find out more, email transitiondorking@nullgmail.com.