Rob Hopkins looks at the impact of the most recent IPCC report through the lens of imagination.

For those who care about the world and the people and creatures we share it with, the last 6 weeks has offered a barrage of dire news. The new IPCC report called for “rapid, far-reaching and unprecedented changes in all aspects of society”. We learnt that since the time the Beatles broke up and I was born (I claim no scandalous link between those two events), human activity has caused a 60% decline in mammals, birds, fish, reptiles and amphibians.

We’ve seen the German government, whose ‘Energiewende’ we were all celebrating a few years ago, dragging away protesters trying to prevent the clearing of an ancient woodland in order to create an open cast coal mine. Oh, and Brazil just elected a fascist who has vowed to turn much of the Amazon, that vital global carbon store, into farmland, merging the departments of environment and agriculture so as to ensure maximum cheap beef burger output. My own personal WTF moment was the US Department of Justice arguing last week, in their attempt to overturn a court case brought by 21 young people, that “there is no right to ‘a climate system capable of sustaining human life’”.  Er, excuse me? Is anyone actually taking this stuff seriously? Grief and rage feel an entirely appropriate response. As Bill McKibben put it, “we’re running out of options and we’re running out of decades”. 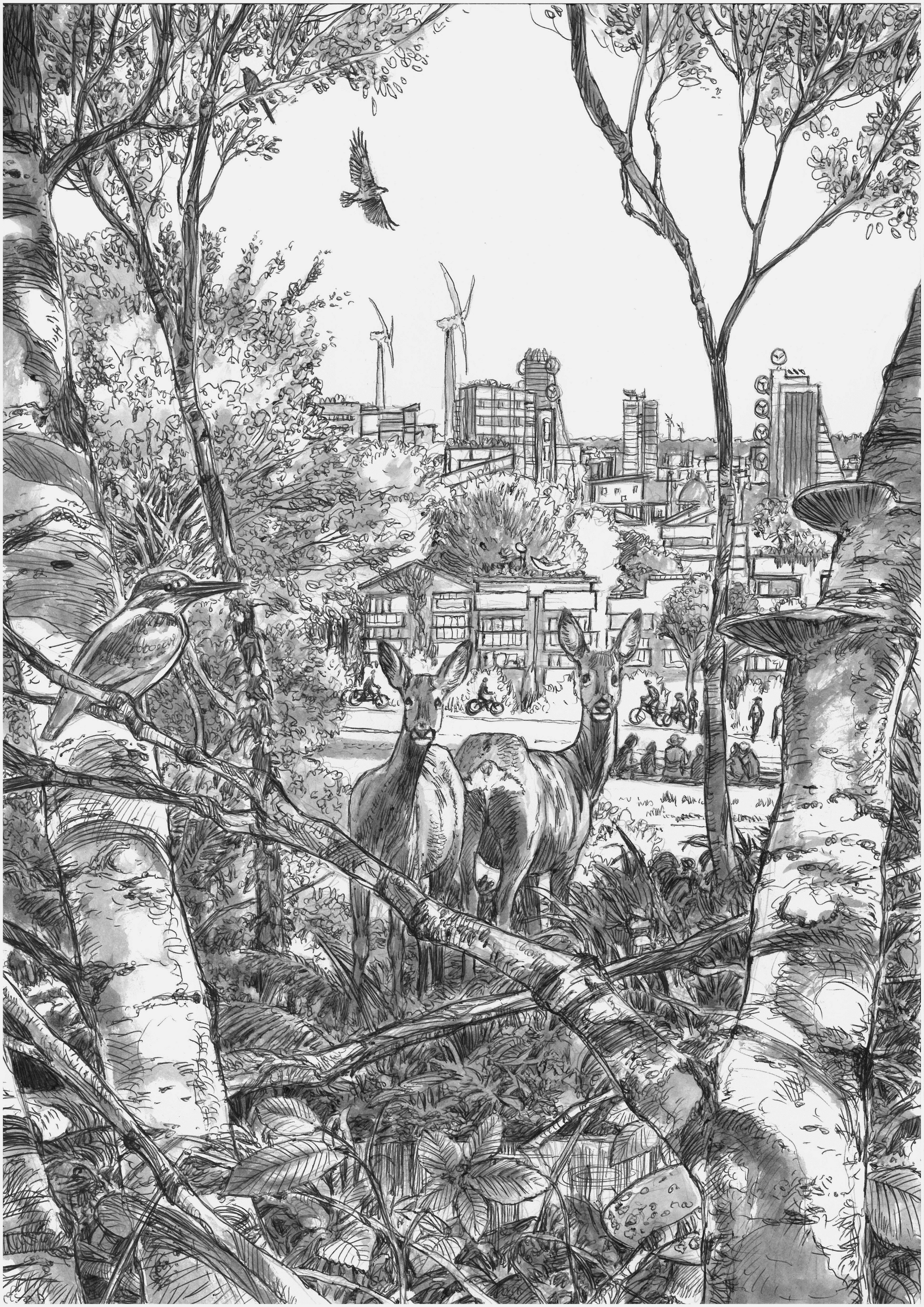 As I work on the book I’m writing about imagination, I find myself intrigued with a thought that doesn’t seem to want to leave my head, namely that the deeper we get into climate change, the harder we seem to be finding it to imagine a way out. It’s an idea that, for me anyway, gets under the skin. We know that the more we see and feel its impacts, the more anxious we become, which in turn results in more cortisol in our systems and the contraction of our hippocampus, the imagination centre in our brain, hampering our ability to imagine the future.

We know that the increase of CO2 in the air we breathe impacts our cognitive abilities to the extent that the rise to 660ppm of CO2 by the end of the century forecast by the IPCC would lead to a 15% decline in those abilities. If we don’t intentionally put our priority on rebuilding the collective imagination, that vital ability may just slide out of our grasp. We know also that increased CO2 levels results in less of the vital minerals in our food that feed our brains and enable us to be imaginative.

The IPCC report does not say that climate breakdown is inevitable. It tells us that climate breakdown is inevitable if we continue with growth-based neo-liberal economics.  As David Fleming once wrote, “if the mature market economy is to have a sequel it will be the work, substantially, of imagination”. We need to be able to imagine it before we can build it, and we need to help those around us be able to dream about it too. It’s at times like this I come back to Joanna Macy’s assertion that these times call for 3 equally important pillars to underpin our responses:

We won’t see the imagination needed coming from the top, that much is clear. If it ever was to be found up there, it has long since evaporated. The IPCC report stated clearly that our survival depends on our using less energy, consuming less stuff and eating less meat, and the next day, the UK’s imagination-bereft Energy and Climate Minister Claire Perry told the BBC “who would I be to sit there advising people in the country coming home after a hard day of work to not have steak and chips?” 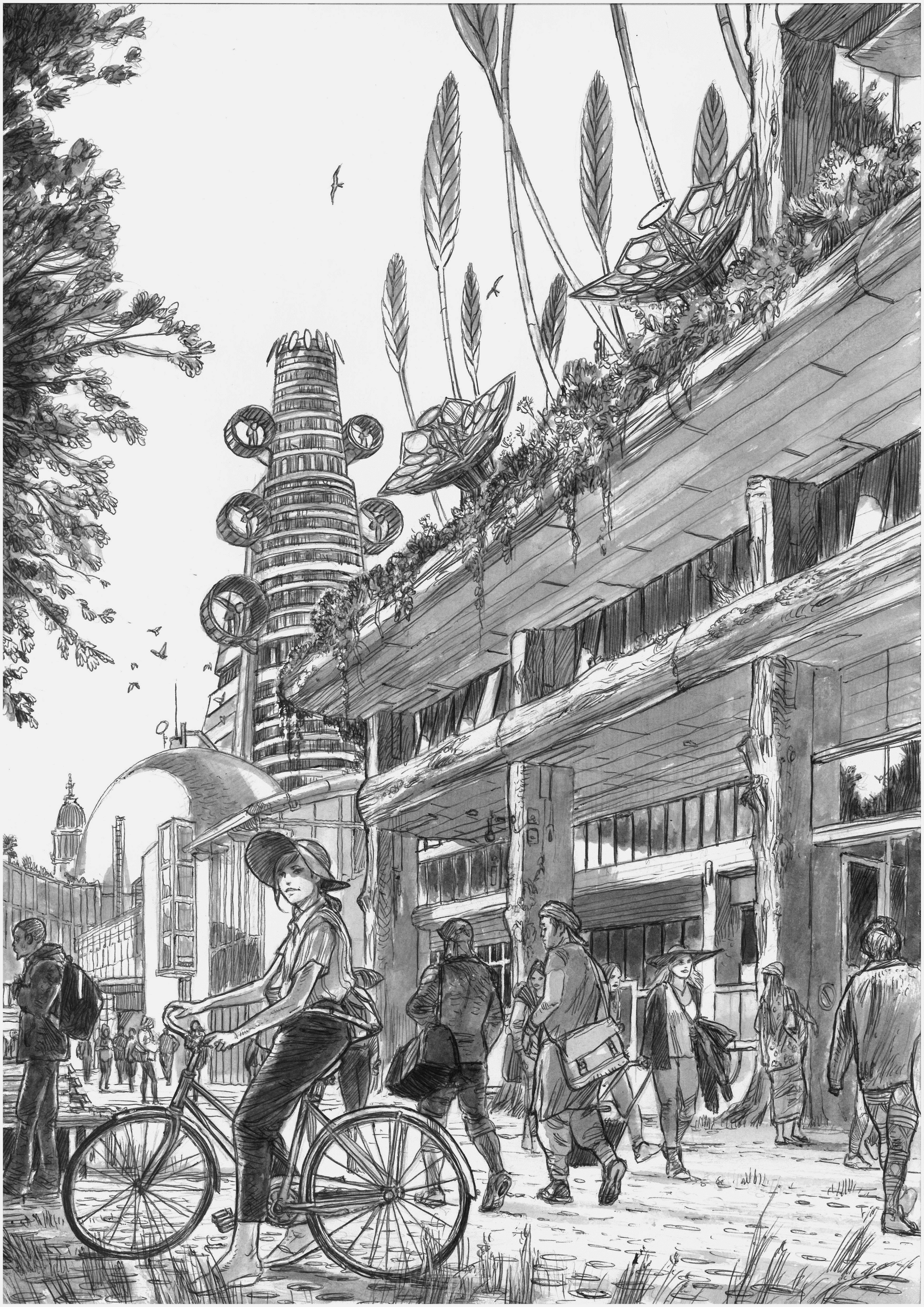 On my recent visit to the amazing Art Angel project in Dundee, which uses art to help people with mental health issues, anxiety and depression back into the world, I was told that the key aspects of what they create are “safety and hope”.  In the people I spoke to there I saw the rekindling of their imaginations, their connection to the future, because of the safety and hope now in their lives that wasn’t there before.

It feels vital to me that alongside the declaration of a ‘climate emergency’ and the very welcome and needed wave-upon-wave of civil disobedience that the recently-launched Extinction Rebellion are calling for, we must never lose sight of the need to fire the imagination about the future it is still possible to create. Research published recently reminds us that making changes in our own lives, living the change that’s needed, and talking about it with others, does have an impact on the thinking of those around us. The same goes for the projects that our communities undertake too.

Those stories are infectious. Really bold, amazing, world-changing, imagination-firing stuff is happening all over the world, even though you most likely won’t see it on the BBC News. If you haven’t heard about what’s happening in Rojava, Jackson, Cleveland or Iceland, or countless other places too, then you need to really bathe yourself in that stuff. And of course without the policy space and change that results from direct-action like the Extinction Rebellion, making low carbon alternatives happen continues to be like swimming against a very strong tide.

Alongside the call to mobilise hundreds of thousands of people to get arrested, and the call, being heeded by more and more companies and even nations to divest from fossil fuels, what if a similar call invited people to occupy empty shops on their High Street and reopen them as stores that model a low carbon future, and create spaces for conversation and connection? Or playful artistic events that bring together activists and artists to ‘makeover’ their place so people wake up to find themselves in the world we’re talking about, the world where we made it? Acts, if you like, of non-violent anticipatory futures-building in very public places.  As David Graeber wrote, “it’s one thing to say ‘Another World is Possible’. It’s another to experience it, however momentarily”.

While I completely understand that grief and despair are, right now, entirely appropriate, I tend to agree with Dee Hock that “it’s far too late, and far too urgent for pessimism”. Last week I spoke with Kali Akuno at Cooperation Jackson in Mississippi, about the amazing work they’re doing there rebuilding their economy around co-operatives and social justice. He told me: “Wallowing in a defeatist attitude is a sure way to be defeated. The lesson from Mississippi is that we need to stay grounded and utilise what opportunities we have”.

I find it helps to see growth-based economics as being a war on imagination, feeding the inequality, disconnection and anxiety which directly undermines it, creating what Henry Giroux calls the ‘disimagination machine’.  I love this, from ‘Rant’ by Diane di Prima:

“The war that matters is the war against the imagination

all other wars are subsumed in it….

the war is the war for the human imagination

The imagination is not only holy, it is precise

it is not only fierce, it is practical

men die everyday for the lack of it,

Last week, Preston, the northern English city implementing a radical approach which is, in essence, city-scale Transition, was chosen as “the most improved city in the UK”. This stuff works, it changes economies, lives and expectations. The expansion of Transition, through the Municipalities in Transition project, to focus on the enabling and collaborator role that local government can play, is one of the most fascinating developments in its evolution.  Of course it’s not yet enough, by any stretch. But that doesn’t mean it couldn’t be.

My main take-away from the 2018 IPCC report is that there may still be time, but only if we can bring about a deep reimagining of what the world could be and how it might work. As Daniel Aldana Cohen put it, “we are only doomed if we do nothing”. While mass arrests and a firm “no” is vital, our “yes” being sufficiently rich in imagination, play,  invitation, joy, awe and possibility matters just as much. “Rapid, far-reaching and unprecedented changes in all aspects of society”. How deeply do those words call to your imagination?  What yearning do they evoke? What possibilities and delights do they invite, what do they call you to step up and do?

As the great Captain Beefheart once said, “fifty years from now you’ll wish you’d gone ‘wow’”. It may well be that the degree to which our work evokes “wow”, here and now, may turn out to be the best indicator we have of its success, and indeed our ability to navigate the next 20 years may, as much as anything else, depend on our ability to cultivate it in those around us.

* The ‘Imagine. Take Action. Repeat’ from the title of this blog is not my own creation, it is unashamedly purloined from this video by the brilliant Centre for Story-Based Strategy.  All images by James McKay are taken from Paul Chatterton’s new book ‘Unlocking Sustainable Cities‘.

It’s time to talk about We

Naresh Giangrande, a co-founder of Transition Town Totnes an...