Transitionese is Transition Network’s linguistic project, aiming to support the international development of the Transition movement as a diverse learning network. Deborah Rim Moiso, a member of the Italian Transition hub and a professional translator, is at the end of an 8-month period coordinating Transitionese, and passing the baton over to Ben Brangwyn at Transition Network.

We hope to spark conversations on the many different ways words and language shape our collective culture. Language used by readers and writers, speakers and listeners, is something alive and ever-changing: please join the conversation to share your stories of being lost (or found) in translation, help shape our definitions, and step up to lend a hand coordinating translation efforts!

Get in touch in comments or email transitionese@nulltransitionnetwork.org.

News from the world of Transitionese

A kit of resources is being released to support the international growth of the movement. This includes material for translators (a glossary, brief style guide, and video); for authors writing for Transition (a style guide with tips and hints about writing for an international audience) and for staff to facilitate keeping in touch with translators (a database of contacts).

What documents are being translated within the Transition movement? Having been released in English, French, Spanish, Russian and Italian the Essential Guide will soon also be coming out in Hebrew and Chinese. Anyone else up for the task?

A lot of work, and anticipation has gone into the release of the Health check activity. With the aim of enabling initiatives from around the globe to complete it, it will be published online in 15 languages: French, Spanish, Chinese, Russian, Italian, Dutch, Portuguese, Swedish, Slovenian, Croatian, German, Hungarian, Hebrew, Japanese and Korean.

Words of the month

As a resource for translators in the movement we’ve created a crowdsourced glossary of terms. Some of the challenging definitions included “Transition group” and “Transition initiative”: which do you use, and when?

As a bi-lingual, bi-national kid with two first names, a double surname and roots in a couple of continents, much of my identity is constructed around the holding of tensions. Between religions (Jewish, Catholic), nationalities (US, Italian), and deeper down, in the roots of my ancestors’ families, nomadic, settled. Farming people, merchants. Soldiers; refugees; cooks; musicians; wine-makers; diplomats. The kitchen at the centre. Or maybe the library? Local, global. Explaining one to the other, finding ways of living simultaneously in both, and building bridges is the stuff my life and work is made of. It must be the case that the way the Transition movement manages to hold together the neighbourhood and the world-wide-web, practical projects and international networks, in the very same beat, is part of what attracted me to it initially, part of what allows me to feel its community as “home”. 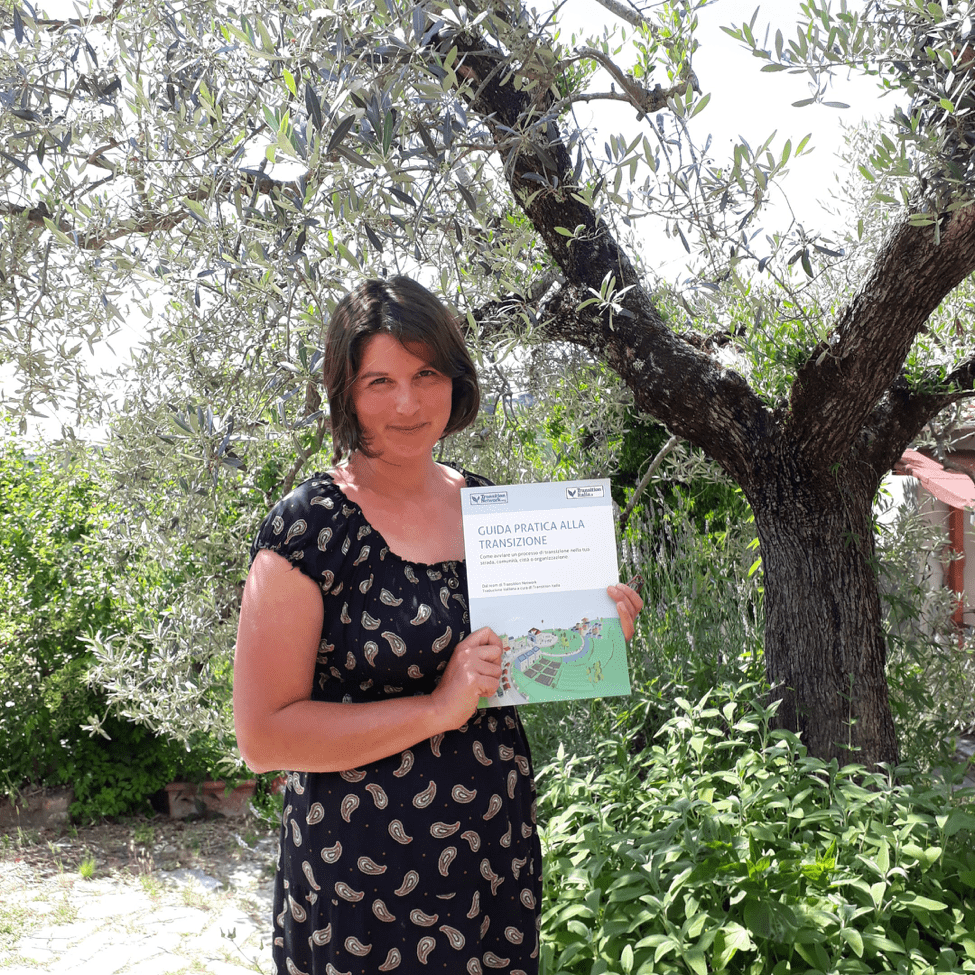 So here is a picture of me in front of the actual, physical, home I live in, in Central Italy. I stand next to a solid old olive tree; it’s just finished flowering. Olive trees are pollinated by wind, not insects; in this season, it’s as if the whole region were holding its breath, waiting to see if gentle winds will result in many fecundated flowers, and therefore an abundance of baby olives growing on the branches, or if a too-hot-gust (so very frequent in these times of climate disruption), or a stagnant few days of windless early summer, will mean low harvests, and little oil. I take care of the trees and the oil mill myself, with the generous help of volunteers, friends and neighbours, so in the past few years I’ve learnt quite a bit about the careful patience, occasional drudgery, shock-at-a-hailstorm and hurrah-for-the-harvest, that is the life of those immersed in the local and close to the land.

In the picture, I’m holding a printed copy of the Italian version of the Essential Guide to Doing Transition, one of Transition Italy’s projects from last year. The process it took to get it in my hands involved the exchange of files across the European continent, multiple volunteers inputting their contributions to a crowdsourced, collective translation effort on an online platform, and a lot of information exchange about layout, picture credits, and tools, from the UK to Italy with some extra input from France. After the job was done, and properly celebrated at the international Hubs gathering in Santorso, I shared learnings from the experience with hubsters (i.e. members of local Hubs, international nodes of the movement) in France, Israel and Japan. All this may have become normal in our age of global interconnection, but should we really cease to be amazed by it? I hear in the news that internet neutrality, and other related freedoms on the use of information, are under threats I barely understand. I am accustomed to a world where no borders—-at least for data—-is the norm. 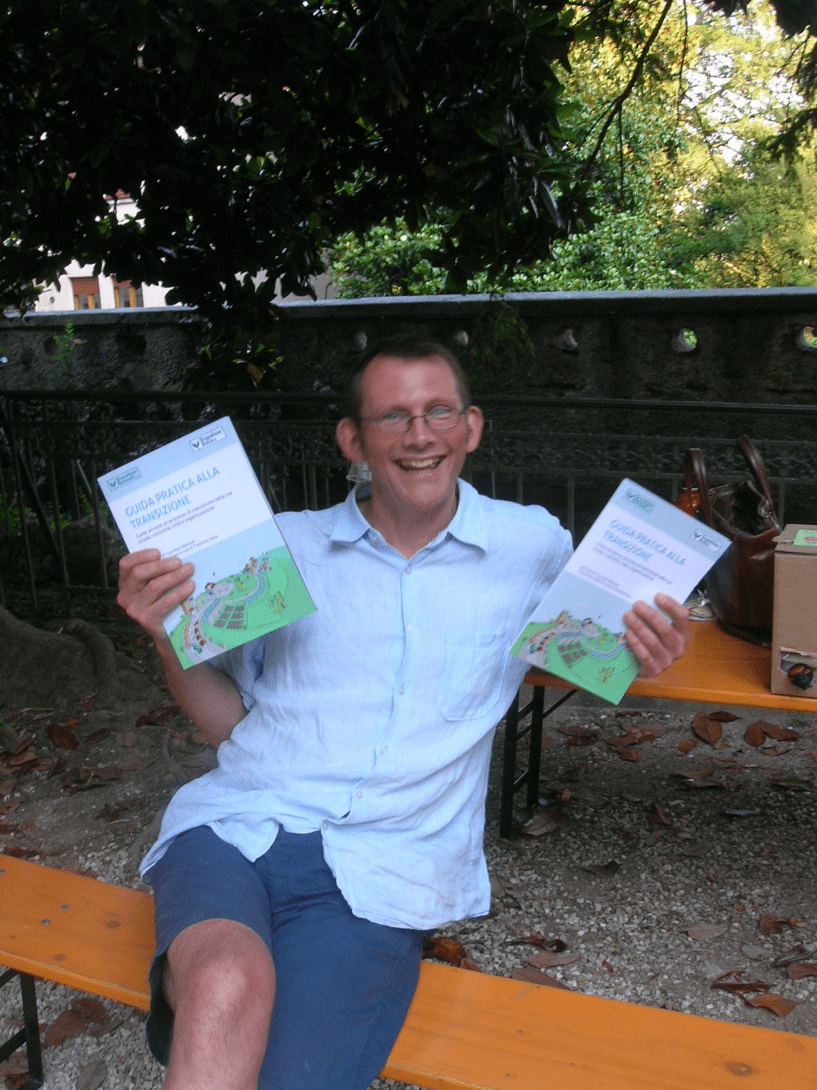 Rob in Santorso with copies of the Italian Essential Guide

An olive tree connects me to ancestors, food, and to the urgency of acting around climate change. A colourful book in my hands, to tending to the future of the community, and to the ingenuity and inventiveness behind the technologies that allow for international cooperation. 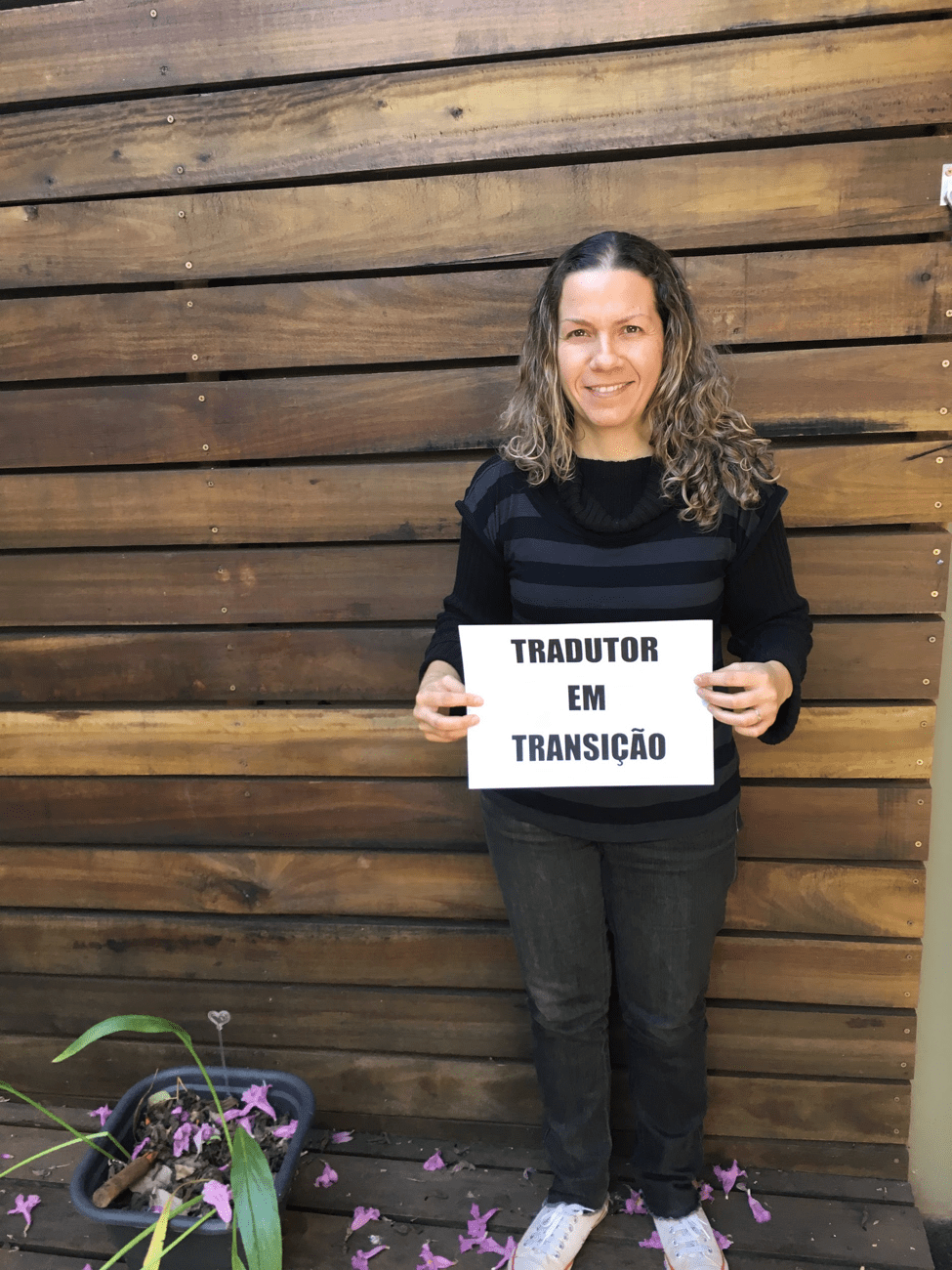 In the past 8 months I’ve been working on a project to translate the Healthcheck activity. We took the process forward at a slow pace, stopping along the way to gather information from the Transition movement, Transition Network staff, and translators involved, on what was needed to support and improve this kind of process. After a few months of work, we will soon see the resource available online in 15 (fifteen!) languages. For those working on the back end of writing, editing and translating in Transition, these is also a support kit including a crowdsourced glossary and style guides for authors and translators (if you’d like a copy, drop us an email at transitionese@transitionnetwork.org).

And all that technology would, of course, be pointless without the people. At the very beginning of reflections on what could support the international development of Transition in terms of translations, we gave a lot of thought to the platforms and technology. Of course, these are important but as we re-learnt again and again, in the end, it’s all about people and relationships.

As I checked drafts and uploaded files, I found myself often looking up from my computer to let the awareness sink in that I was, via email and conferencing, collaborating with people on the other side of the globe, that I might never meet. All via the magic of sharing words. Which is, I forget who wrote this, a kind of telepathy. 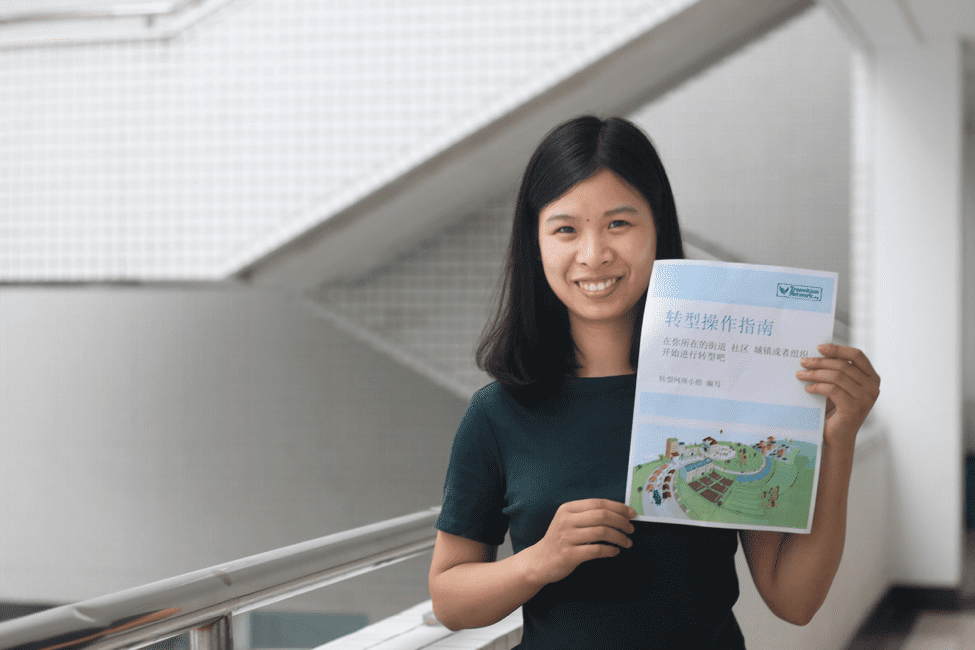 Xu Danhua with the Essential Guide in Chinese

It’s a rather dark time these days in Italy, as the government clamps down on humanitarian aid and raises a very loud, if rather inarticulate, single-thought, single-meaning, simplified, violent voice against all difference and every possible shade of complexity.

In light of all that, it fills my heart with an extra dose of joy to extend appreciation, admiration, and great respect to all these colleagues around the world, and for all the interpreters, volunteers, translators, bloggers, video-makers, photographers, storytellers, who are helping spread ideas and practices, stories and voices, into a colourful chorus, where complexity and difference are made welcome, and transported gently from the waves of one culture to the next.

“An authority in orality, Walter J. Ong (1982) reminds us that the Hebrew term dabar means both “word” and “event”. In oral culture, a word is an event. It carries weight and mighty influence”

News from the world of Transitionese