This is the fourth blog from our guest editors, Jenny Goodman and Bid Cousins.
The aim for our weekend was to explore and test song as a medium for personal and societal change by creating new songs of change and singing existing ones. We wanted to create, together, three or four songs of change (or at least the seeds for growing them) and we wanted to see what effect the weekend had on the participants in terms of their well-being and their motivation to take action in the world.

We planned the weekend carefully according to our core principles I.e it should be accessible to all regardless of their song-writing or singing experience and we would aim to work principally in a group (although if people wanted to work alone that was fine), drawing on our collective creativity. We prepared a mixture of exercises to free people up and give them ideas and starting points and we interspersed those with existing songs which were good examples of particular song structures. We thought through some of the key building blocks of ways songs can be structured – call and response, rounds, parallel harmonies, chord progressions and repeated phrases. We also devised exercises to generate lyrics in different ways and ways to create melodies.

More detail about the tools we used can be read in our next blog, which will be the last one. Do please comment on these and give us feedback about how you have used/developed them.

On Saturday morning we were joined by an enthusiastic (and in some cases very nervous) group of 17 people. There was a real mixture of experience in both singing and songwriting. We had a poet and a trio of people who performed together but who had never written an original song for themselves as a group. Some people had written in the past and felt blocked and were looking for inspiration, others had never written anything in their lives before! 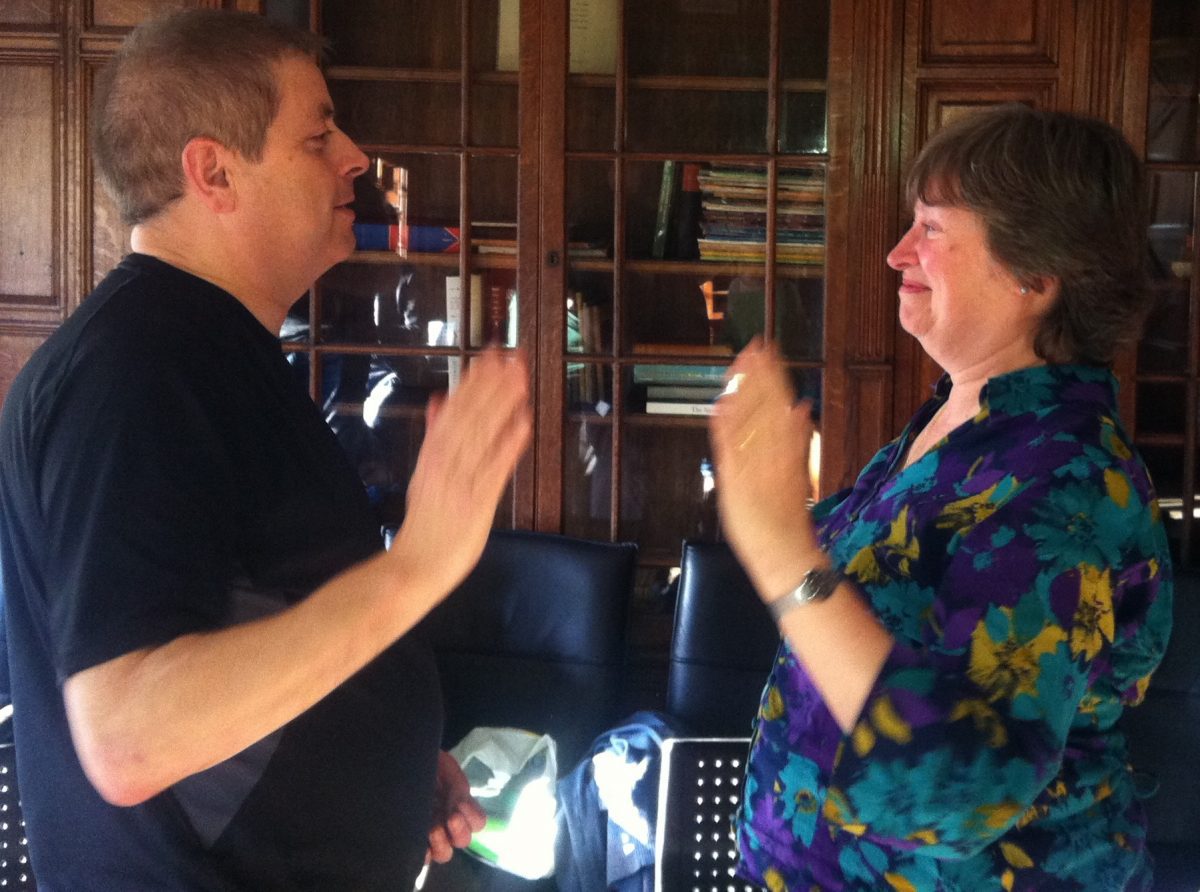 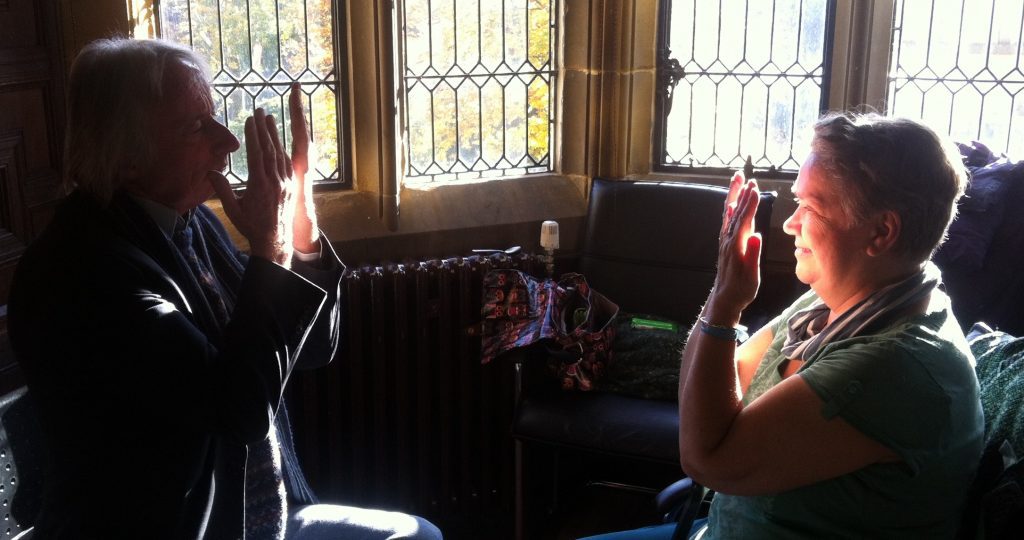 We started with a simple warm up, followed by some  structured improvisation using long notes and calls and response. We then sang our first songs – a classic of the anti-apartheid movement “Oh Freedom” and a round by Bid based on the words of Julian of Norwich “All Shall be Well” and used these to explore simple song structures. Then we split into random groups  and went off to create new songs using the techniques just explored.

We had a box of inspirational quotes to give people ready-made lyrics. The building was filled with the sounds of new songs being created and soon those new songs were being shared and celebrated. Some were fragments or beginnings and others were more complete but everyone had created something together. It was truly inspiring to see how people used the tips we’d given them and then ran with their ideas. By the end of the first day we had 6 new songs in development.

When the group returned for Day 2 one participant said she just couldn’t stop writing that evening! “It was just pouring out of me”, she said and then, laughing “it’s all your fault!”. She had never before written a song in her life. That morning we offered more ideas for building blocks – doing fun exercises to generate unusual lyrics and new ways to create melody . The afternoon was set aside for people to work for a solid chunk of time on something they really wanted to concentrate on. The trio chose to work together on the fragment they had created together on Day 1. They returned with a beautiful call and response song with glorious harmonies, all ready for performance.

Another woman who’d never written before gathered a group around her over lunch who spent the afternoon creating a song which included drones,vocal percussion, parallel harmonies, call and response and repeated phrases around an ecological theme.

And the woman who couldn’t stop writing? All her writing had flowed from a recent visit to India and her reflections on pollution and poverty and the importance of us all taking action to preserve the environment. By the end of the afternoon her words had been shaped into lyrics for a whole song reflecting the influences of Indian musical traditions. This song will go back to Jenny’s group, Far Cry ,for more development.

By the end of the weekend the bones of at least ten songs had been created. As well as the song mentioned above, another was ready to be taught to Bid’s group on Tuesday morning ; others will require a little more crafting and attention to complete them but the outlines are there. 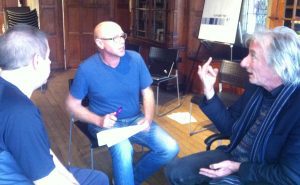 So – we built some new songs and we had some fun. We shared frustrations, anger, fear and hope. We made a group out of a bunch of strangers. We struggled and wrangled with lyrics and the nuts and bolts of music, and each other.
Here is some of the feedback participants gave us:

'Writing in collaboration was amazing....You've re-awoken the activist in me'

‘Boundaries. Having boundaries of time, or limitations on words, really helped stimulate the creativity.’  – Linda

‘Overcoming my own personal fears…the empowerment of that has a knock-on effect. Part of this creative process was opening up to others… that must and will have repercussions in the wider world’ – Vivienne

‘You’ve given us a toolkit… somehow I couldn’t get from ideas to where the song gets written. Now I feel I can and am really optimistic’ – Liz

‘It helped me feel I can play more…enjoy experimenting….. I don’t always need to finish things. I can enjoy the crunchiness of wrong notes. …. I am looking for people to sing with me now, I want people who can be angry alongside me. Show my anger in music! I will use these tools, they are very useful, especially to a non-musician‘ – Ruth C

‘It was good to be a part of the workshop… I was glad that I had previous experience of harmony singing in small(ish) groups…or I think I might have felt a bit intimidated by the ‘performance’ element. The subject matter meant that the songs were always going to be positive…but (for me) the focus on different writing techniques meant the contents of the lyrics took a slight back seat to the structure of the songs.

….I have got the outline of a song that I would like to work on…which I wouldn’t have thought about had I not come to the workshop.

In general, I think that as a technical song-writing workshop…the majority of it worked really well… I would have liked more focus (perhaps discussion and generation of images/ themes/ ideas) on the types of change that singing can bring to individuals and communities…However, I do recognise the limitations of a two-day workshop with a group of people who have different levels of experience, ability and equally different expectations. My comments also probably reflect my own way of looking at songs as being lyrics-led. ‘ Tony

'Singing in a group has been just mind-blowing. Brilliant. Confidence-wise, singing in a group, having that support... makes me feel I can do it... I feel more confident.  I feel passionate about communicating...'

If you want to know more about what we’ve been doing and comment on it, you can find more blog posts on https://beepjc.wordpress.com