Tuesday was kind of a catch up day really, until the evening. I spent most of the day at Place to B near Gare du Nord, catching up with stuff and doing interviews.

Did one of those at about 10 which resulted in the interviewer telling my colleague that not only did he have everything he needed to write a story, but that he was going to go back and start a Transition initiative in his community!  Not bad.  I like it when that happens.

I also sat down with Emilio Mula who asked how it was going so far, and here’s the discussion we had:

Later, with Transition Network’s Hubs Co-ordinator Filipa Pimentel, we did a radio interview, which you can hear here (in French):

Also, here is the link to a rather good blog with an interview I did on Saturday at the launch of the French version of ’21 Stories of Transition’.  So the day was really  a mixture of interviews, catching up on emails and welcoming Transition Network’s Delivery Director Sarah McAdam who arrived fresh off the Eurostar to join the team. 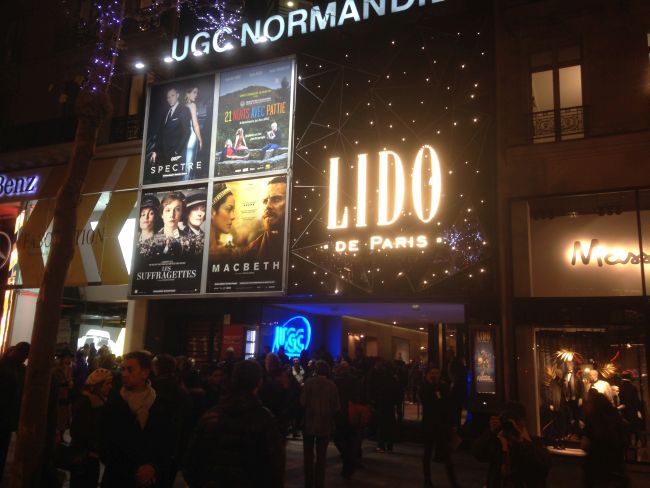 At 6pm a whole bunch of us headed off to the UGC Normandie, one of the largest cinemas in Paris for the Premiere of ‘Demain: the Movie’.  Here’s the Transition Network crew just near the cinema: 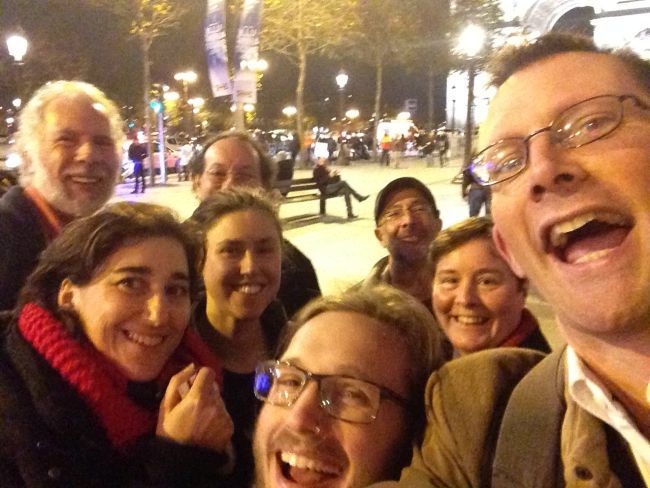 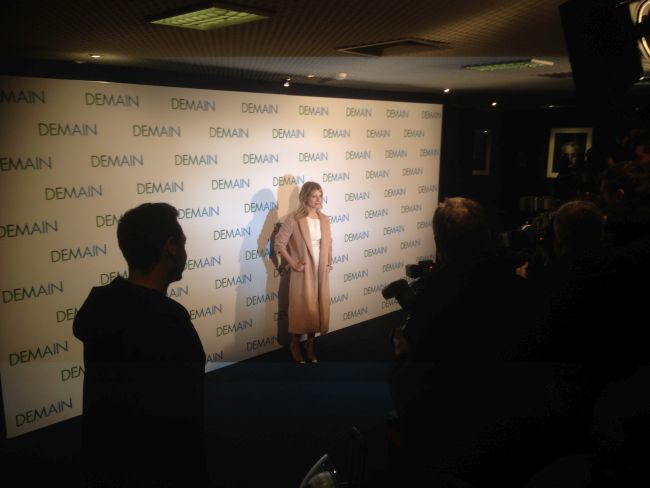 Every now and then, outside the room, there would be lots of shouting and flashing lights.  It turned out that, given that it was a premiere, every now and then a famous person would arrive, stand in front of the ‘Demain’ screen, and the gathered press photographers would take lots of photos.  This happened a few times, most notably when Mélanie Laurent, who along with Cyril Dion, made the film, turned up. 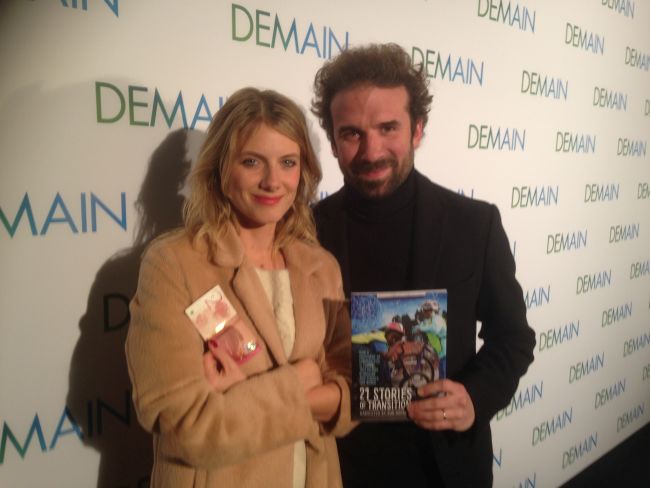 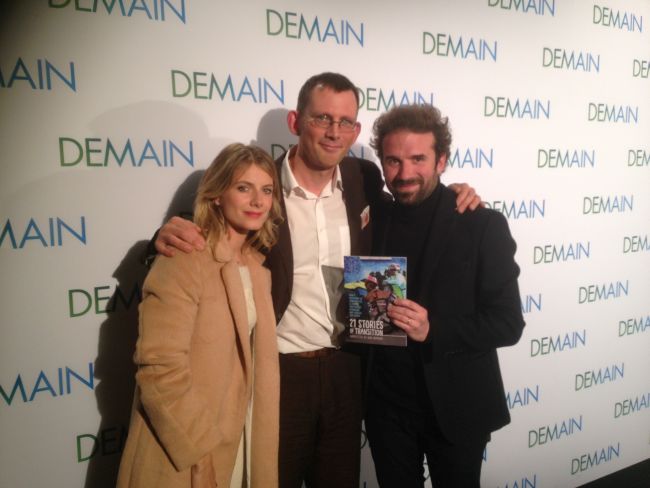 Before the film started, we also all had our photo taken with Melanie and Cyril, and they also very kindly posed with our rather wonderful new book ’21 Stories of Transition’. 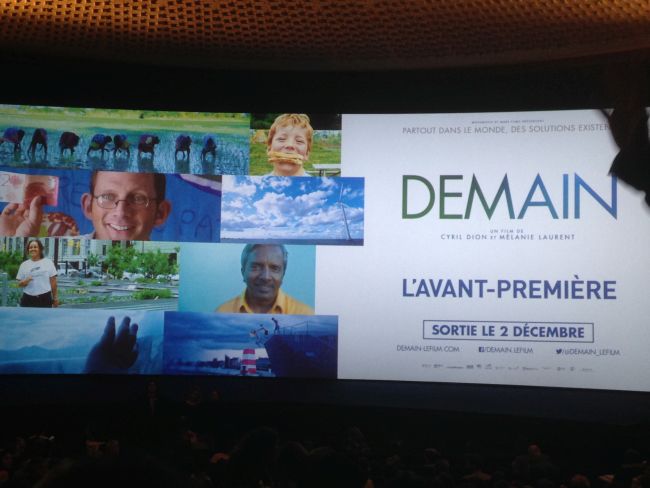 The film was really quite remarkable, and so what follows will comprise a kind of mini review of the film.  It was made possible by a community of 10,266 crowdfunders.  Here is a very quick sense of the atmosphere inside the cinema before the film began:

The film follows Melanie and Cyril and their film crew friends on a journey around the globe looking for solutions to the crises facing the world.   The journey takes them to many different places, and weaves into a moving, powerful and impressive overview of the world that we could create, indeed that is already being created.

It starts looking at food, visiting Todmorden to learn about Incredible Edible Todmorden, as well as visiting Detroit.  One woman in Detroit said “we need to figure this out rather than move to the next place, as there are no next places”.  What’s happening there in terms of urban agriculture is amazing.  The film doesn’t glamourise it, with one urban farmer saying “urban agriculture sounds great on a PowerPoint presentation”.

But in Detroit, urban farming is already creating work and, as the film states, there are still 6000 acres of wasteland that could be used.  It’s an amazing look, though, at what can be created in a city, especially one like Detroit, breathing life back into what was a classic industrial monocultural town.

Todmorden shines too.  Pam Warhurst, one of the founders, says “we didn’t start out with “let’s save the planet” because that’s far too grand”.  Later she says “that’s all the future needs, more people talking to each other”.  We visit a remarkable permaculture farm in Normandy, one of whose farmers tells us that “practicing permaculture is far greater than practicing law”.  Through their practices, she says, they produce $100 of food per square yard, far out performing industrial agriculture.

‘Demain’ then moves on to energy, with Jeremy Rifkin pointing out that for every 1 degree in temperature, the atmosphere holds 7% more moisture, resulting in the extreme precipitation events we are seeing today.  Over the last 450 million years, he pointed out, there have been only 5 great extinctions, and we are now in the 6th, and we’ve created it.

He argues that renewables are moving so fast that they constitute the next Industrial Revolution: “this is a revolution of unprecedented magnitude”, he continues, “how can fossil fuels stay in the game?”  The film takes us to Copenhagen, Finland and elsewhere to see renewable energy in place now, making a huge difference now.  We see cities where driving a car is the least popular transport choice, for instance in Copenhagen where 67% of commuters no longer drive.  As the Mayor of Copenhagen tells the film “we don’t make cities because we want to make cars happy”.  We get a real sense of how amazing cities could be.

We visit the amazing Pocheco factory in France (the hugely kind sponsors of the envelopes in which we mail out copies of ’21 Stories of Transition’), a remarkable factory which really models the circular economy in practice.  Local economies get great coverage, with Michael Shuman making an appearance, and a trip to the BALLE (the Business Alliance for Living Local Economies) conference.  Mark Burton takes them to the beach to talk about where money comes from, I waft a £21 Totnes Pound note at them, and the Bristol Pound gets a good exposure.  As one member of BALLE puts it, “if what we have is people power – then we have to use it”.

The film then looks at democracy, at the amazing story of Iceland redesigning its democracy after the financial crisis there, and at a village in India reimagining its political models.  “We can all practice politics” someone says at one point.

The last section looks at education, visiting an amazing school in Finland which offers a great model for how to better educate young people than the crap served up to them in most education systems today.  The principal at the school says “we use our time for teaching, not testing”.  Among other things, they see their role as teaching the students to “love each other”.  So rarely do any films about solutions to the climate/environmental/economic/social crises address education.  It was a brilliant way to pull all the film’s threads together.  The film got a standing ovation. 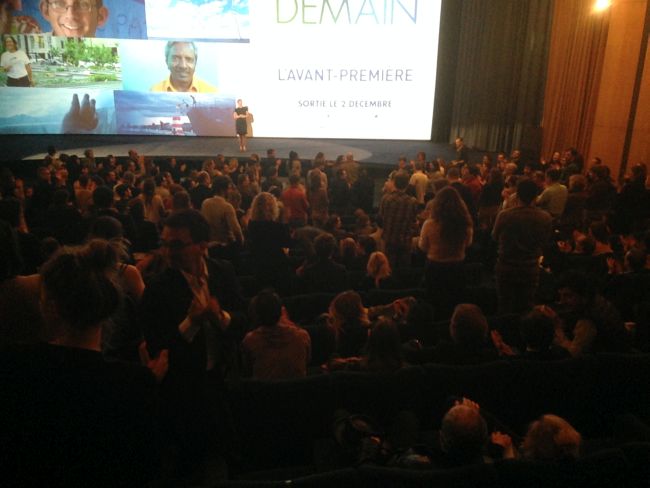 I think it is one of the best films on what the new economy, the new paradigm, looks like.  It’s an amazing promo for the Transition movement.  It’s passionate, informed, heart-felt, rich and moving.  It is carried by the characters in it, and is quite wonderful.  I hugely recommend it, and I think it should be shown everywhere.  We should all be deeply grateful to Cyril and Melanie for this film.  The number of young people in the audience was really striking too.

After the film all of us who were in it went up on stage and each said a few words about the film.  I said that it had made me cry a few times and that I was particularly impressed by their following one of the clips of me with a track by the Ramones, who I love dearly. 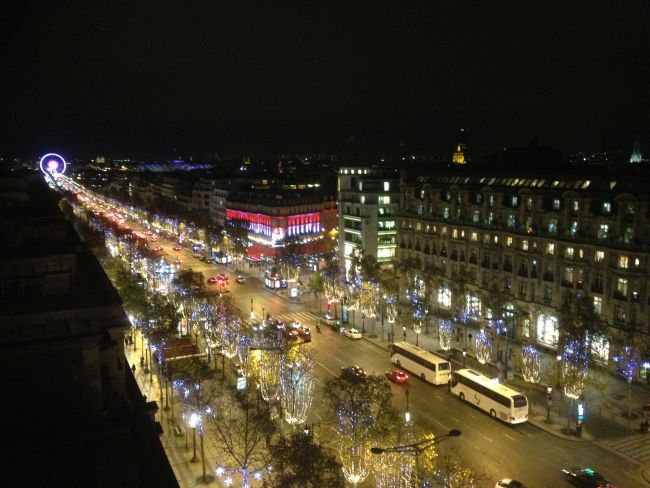 After the event finished, we were invited to the post premiere party, in an apartment overlooking the illuminated Champs Elysees, attended by lots of people involved in the film.  It was very glittering and I met lots of very lovely people, all of whom were blown away by the film.  Well, as I said, not every day I get to go to the premiere of a movie that I’m in!  A magical experience, and one that I will cherish for a long time.  My thanks to Cyril and Melanie for creating this film.  It screens today at COP21, where it is desperately needed.  They have created something that will really accelerate all this work.