Ruah Swennerfelt has just published a fascinating new addition to the literature on Transition.  ‘Rising to the Challenge: the Transition Movement and People of Faith’ was published recently by the Quaker Institute for the Future (QIF), and, as Stephanie Kaza puts it in her endorsement of the book, “demonstrates the possibilities of practicing loving kindness on a global scale”.  I caught up with Ruah to find out more about the book.

A few years ago I was given a grant to do some research from a Quaker organisation, and I wanted to do something looking into the Transition movement, which I was just starting to get involved in at the time.  So I set off around the world, visiting Transition groups, and coming to the 2011 Transition Network conference in Liverpool, as well as visiting an amazing Permaculture project in Palestine. I got home and sat and thought what do I write about all this?

I felt it was only right to write a book about Transition if it said something new, there were already many great books on the subject.  I was asked by QIF to write a book about Transition for Quakers, but I thought “why not take a multi-faith approach?”  My aim was to explore how to involve more people of faith in Transition.  I started to research what different faiths had to say about these issues, and the book slowly started to come together. 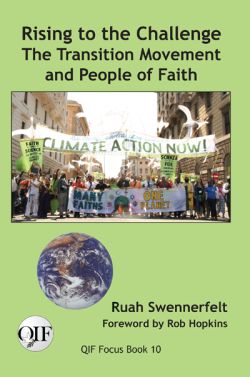 Transition has exploded in Europe, but has been much slower to take root in the US, due, I think, to our culture of individualisation.  We don’t have much of a sense here of the common good.  In Europe many countries have universal healthcare, public transport, free education.  The US is more “me, me, me”, and to get people involved at the community scale is not easy.

My sense though was that people who identify as people of faith usually have, at the core of their teachings, the idea of the common good, “love thy neighbour” and so on.  If Transition is able to tap into that, it could bring new people into the Transition movement.  The idea is certainly not for people of faith to somehow take over Transition groups, or even to talk about their faith, rather I hope this book will introduce people of faith to Transition, and give people in Transition some tools for how to engage and work with communities of faith.

I have been told by a couple of people who see themselves as atheists that they feel uncomfortable about the bringing together of faith and Transition as I have in the book.  But I am very clear, and Rob Hopkins is very clear in his Foreword, that the Core Group of any Transition group should be unaligned politically and religiously.  The question is how that group might reach out to communities of faith.

I am an admirer of Starhawk, the pagan permaculture practitioner.  In her book ‘The Fifth Sacred Thing‘ she writes about the solution that is found to an advancing force of violence, people saying to them “there is a place at our table for you”.  In the end it was what brought peace to the story, and it’s the philosophy for me that runs through this book, the sense that there is a place at the table for everyone.

It’s about finding common ground.  If you vote Trump, there is still a lot we can agree on, common ground we can find.  The founder of the Quakers used to talk of the need to “walk cheerfully over the Earth answering that of God [I reinterpret to the goodness] in everyone”.  For me, even in situations where people are feeling angry or defensive, you can always find something in common, such as how their kids are doing or how their garden is growing.  Although what might be common to the two people seems trivial, it provides a foundation for further communication and relationship. We can find that goodness in everyone.

I’m an optimist.  Someone recently told me “it’s over, we’re going to go extinct”.  Well if that’s the case, let’s start living now as we should have done all along.

What I love about Transition is that it connects me to people doing great stuff all over the world, and that gives me great energy.

If you’re a part of a Transition initiative wondering how to engage a faith community, my advice would be just to go and have a conversation with them.  Most communities of faith have buildings, which can be used for events.  Share posters, co-create fliers, hold events as conversations.  There is nothing in Transition that could be seen as excluding for communities of faith, there’s nothing there that could offend anyone.

This is not a book that is going to make me any money, any money it does make will go back into the Quaker Institute for the Future for future publications.  You can download the book for free here, or order a hard copy through Amazon.