Every February, the Russian River Brewing Company in Santa Rosa, California, brew a beer called ‘Pliny the Younger’.  Nothing too remarkable about that you might think.  But what would you say if I told you that their brewing this one particular beer leads to $4.88 million in economic impact on the local economy?  Craft beer as economic development?  Absolutely.  Read on.

At the same time as I was reading about Pliny the Younger, I was also reading about Philip Green, who, it appears, bought British Homes Stores for £200 million, then sold it for £1 and, it turns out, allegedly extracted over £580 million from the business which has now gone into administration, with 11,000 jobs soon to be lost.  That’s a huge blow to many towns and cities, never mind an eye-watering example of the parallel universe the mega-rich seem to operate in.  There’s even talk of him losing his knighthood because of it.  So what’s the link to Pliny?

Pliny the Younger, a triple IPA, was, in 2009, rated by BeerAdvocate.com as the “best beer in the world”, and has since developed a huge cult following.  It is only available for 2 weeks every year, and its release results in ‘beer tourists’ travelling to Santa Rosa from around the world.

This February, over 16,000 people travelled to Santa Rosa for the beer’s launch.  According to research undertaken by the Sonoma County Economic Development Board (SCEDB), 61% of those were tourists from outside Sonoma County (of whom 83% were from elsewhere in California) who were only making the journey because of the beer.  On average they spent $165 a night, and during the 2 weeks spent $933,111 in the town’s breweries and bars, on average each person spending $73 in the brewery itself.

You might think that so many people turning up to drink a beer which is over 10% ABV would lead to drunken mayhem and chaos in the streets, but, according to pressdemocrat.com, “in past years, the crowd has been anything but unruly, opting to play board games or to read a book”.  Aw. 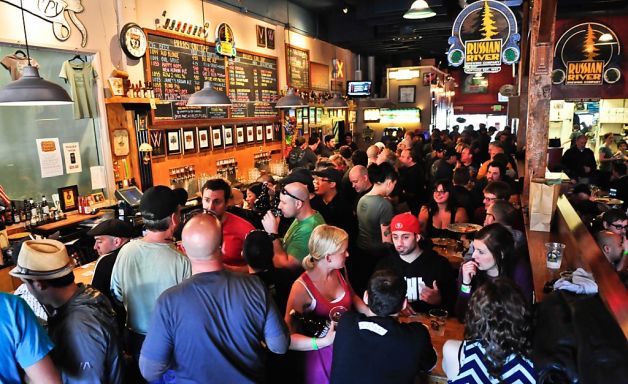 Clearly this is not a happening that is without environmental impacts, with $146,540 being spent on transportation (including $72,795 on airfares).  But it is a fascinating story that gives a sense of the economic potential of local food/drink when artisan craftsmanship meets good marketing.

Do we need the kind of extractive, selfish, accumulative capitalism as modelled by Philip Green in order to have healthy town centres?  I would argue not.  As Transitioners, I feel there are three key reasons why Pliny the Younger is a story we should really be celebrating, and one that offers a vision beyond that sort of predatory and extractive approach:

1. It opens the door to economic regeneration based on craftsmanship

Writing in ‘The Craftsman’, Richard Sennett raises the idea that one of the key indicators of the success of an economy should be the number of craftsmen/women that it produces.  Craftsmanship is not something that figures in Philip Green’s world, but it could prove one of our best protectors.  The Pliny the Younger story can inspire a new generation of young people that a craftsperson is a very cool thing to be indeed.

A book is due to be published this summer called The Bestseller Code, which argues that through the use of algorithms it is now possible to know, with 97% certainty, how likely it is that any given manuscript has the potential to be a New York Times bestseller.  The same technology is being used to enable computers to create great works of art.  This reduction of creativity and artistic brilliance down to a series of equations is vastly depressing.

But food and drink will remain, one hopes, apart from this nonsense.  Brewing, like cooking, cheesemaking and breadmaking are arts that cannot be dissected in such a way.  ‘GoogleTastebuds’ is hopefully a long way off.

2. It leads us back to things that only town centres can do

As Catherine Shoard writes in The Guardian, the recent demise of BHS and others draws our attention to the fact that “unless your shop serves a need that cannot be met online, it will now struggle to survive”.  We can reimagine our local high streets, as Julian Dobson points out in ‘How to Save Town Centres‘: “they can be places where we rediscover local identify and community, where we can be more fully alive and more fully ourselves”.  Creating a local food culture can also have knock-on advantages for the retail economy too.

The SCEDB study showed that those coming to Santa Rosa for the Pliny the Younger launch spent $296,106 on retail and $38,273 on “spa and personal care services”.  That kind of trade makes a huge difference to a local economy.  If Philip Green is going to abandon our town centres, Pliny the Younger, or something like it, could come riding to the rescue.  See, for example, how Bristol is making food festivals one of the key elements of how it presents itself as a destination.

3. It replaces the idea that exports are king

There is a big drive for businesses to export what they produce, but the Pliny story suggests that a different take might instead be to create such wonderful things that they make your place a destination.

It always used to be that people would travel to places for certain foods or drink only available in that place.  Now we can get most things anywhere, but the Pliny story points of the real economic advantages of a move back towards things that are only available in a particular place.  In this scenario, exporting becomes not a means in itself, but the equivalent of handing out calling cards, invitations to visit the place.  In the same way that many apps offer a basic version and then make their money by selling a more fully-featured version, perhaps the business model becomes that some produce is exported in order to promote other products only available in the place itself.

It’s something Philip Green can’t buy or sell, and for that reason alone, is just one strategy that offers the economies of the places we live a powerful inoculant.