This is the fourth blog from guest editors, The Eroles Project.

The Eroles Project, erolesproject.org, works to create conditions for personal and political change towards a sustainable and equitable world, through building an active community of changemakers, designing complex-responsive projects and hosting international residencies. During the summer of 2017, two-week residencies were run in Eroles, in a small village in Catalonia, Pyrenees mountains. The 2017 theme was Democracy with the first residency exploring “Deepening Citizenship” and the second “Emerging Politics”.

In this blog Ruth Cross co-founder of Eroles Project shares her experience of attempting to sense the ‘Social Field’ of a civic space with two groups of political activists, academics, politicians, teachers, writers, arts graduates, coaches and facilitators, from various European countries. She explains how, by becoming more receptive to ourselves, each other and our surroundings, a clearer understanding can be gained of what is really happening in our everyday political lives. This awareness offers a more reliable place to discern what actions are needed and the ability to notice what repercussions our actions have.

The role of Civic spaces within Democracy

“When cities and neighbourhoods have thriving civic spaces, residents have a strong sense of community; conversely, when such spaces are lacking, people may feel less connected to each other.” * 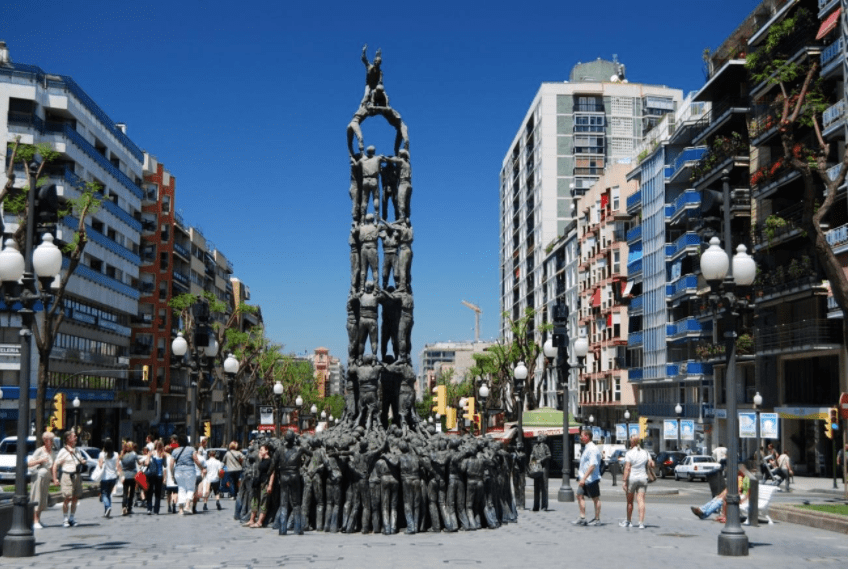 During the residencies we became interested in civic spaces as an opportunity to enact and practice democracy. These common areas in all towns and cities, although in many countries declining rapidly through privatisation, provide a space for cultural traditions, demonstrations and protests, inhabiting and relaxing, celebrations, social and economic exchange, guerilla gardening and engaging with public art. Activities where we as citizens can come together to meet, exchange and shape the fabric of our political lives (Our arrival to Politicking).

A question overlooked by people in democratic society whether they are aware of it or not, is who has responsibility for ensuring that the activities in civic spaces welcome all voices? We believe as citizens we all are. This question becomes more complex within POPOS’s, Privately Owned Public Open Spaces, and in situations where the closure of civic spaces is threatened, where then does the responsibility lie for keeping these spaces open for civic life?

Based on a discussion lead by residency participant Patricia Shaw, sharing her in depth reading of philosopher and political theorist Hannah Arendt, we came to understand democracy in the public realm as a collective willingness to accept our own and others plurality. We are different, and that is ok. Arendt suggests we experience political freedom in the moments we act amongst our peers, where ‘peers’ are the uniquely differing yet related others in which our own uniqueness is possible. Action takes up the freedom we always potentially have to respond spontaneously in word and deed to events that are happening and to accept in this way responsibility for our participation.

Why is this important on a personal and political level?

For many of us in private we feel comfortable to ‘be ourselves’ with others. In public spaces however, particularly in states and cultures where democracy is crumbling or never existed, censorship and control create a fear of difference, which conditions ‘normalised’ behaviours. Thus reducing the freedom we feel that we have to interact and express ourselves as “we are”.

Many of us are influenced by the increasing demagoguery (leaders in a democracy who gain popularity by exploiting prejudice and ignorance among the common people, ‘whipping up the passions of the crowd’ and shutting down reasoned deliberation). We find it difficult to distinguish between what is true and the swaying of mass opinion, and in our civic lives many of us don’t have the skills to express when we feel dissonance when we encounter a behaviour or action that we feel is unjust. Learning to be acute with our discernment can be challenging in current ‘post-truth’ era. It is these times of seeming democracy that require us to be sharper and more awake to keep our civic spaces, our civic freedom, our minds, from closing down and lazily slipping into numbness, othering and blame.

Oppression is easy to identify when political leaders tweet anti-Muslim videos, potentially inciting the graffiti I see when I look out my window in Madrid – No Islam (with thankfully a more recent addition – iphobia). But when it takes subtler forms, it is less easy to notice when a diversity of opinions, experience and behaviours are being closed down.

Staying open to whether diversity of experience is welcomed or not within our workplace, community gardens and town halls requires us to be attentive. If our neighbourhoods are accepting of difference, it is harder for the state, political systems, corporations or any other form of control to corrupt and corrode community cohesion.

With a background in choreography and a freelance career working creatively with changemakers and activists I have been interested in these questions for some time. A few years ago I came across Social Presencing Theatre a methodology, developed by Arawana Hayashi. It combines many of my favorite things in one practice; body-awareness, movement, experiential learning, Shambhala teachings, individual, organisational and social change. It’s being used in business, government, and civil society settings, in Brazil, Indonesia, China, India, Europe and the United States.As well as a theory of practice, Social Presencing Theatre is a series of exercises which reveal patterns and relationships in a system to make visible both current reality, and the deeper – often invisible – leverage points for creating profound change.

Village in the Village

Village is a 20-minute exercise where participants move through a designated space choosing spontaneously to run, walk, lie, turn, stand, greet. Its aim is to expand awareness of patterns, by reducing language and limiting movement, in order to learn something about human relating within systems. Village, and Social Presencing Theatre in general, is not usually done in civic spaces, but as an attempt to practice the theory we had been discussing in the privacy of our Eroles Project residency, took it to the local town square in Tremp. 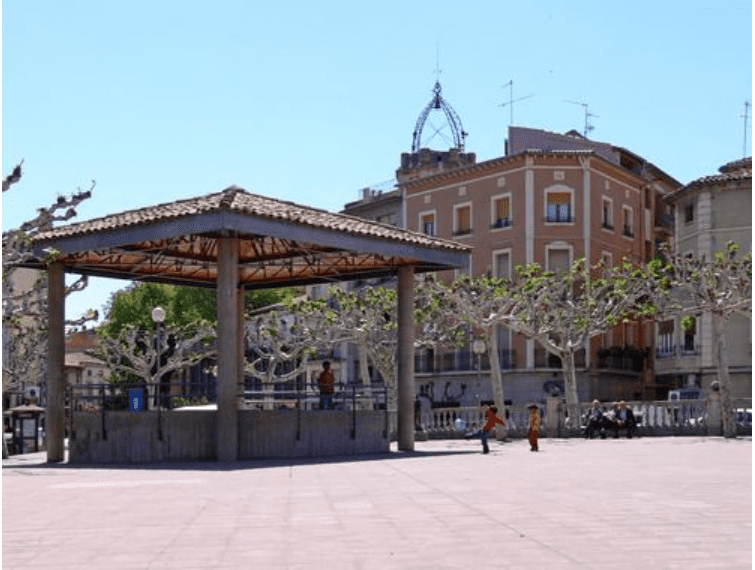 Patricia, an elegant woman in her 60’s, lying in the middle of square and walking on benches, introduced a surprisingly playful energy to the group. Later a woman from Tremp with a buggy and older kids, started running through the square following participants, and again the group imitated her. From then on there was more interest from Tremp citizens.

One participant’s feedback, “… very liberating, I always have an agenda in my head and therefore an absence of genuine observation, but now I was surprised by the amount I noticed, and how fun it was to just be present in a space.”

The patterns that emerged were defined by the big metal contemporary structures in the vast pedestrian zone. Shapes and rhythms formed. Patterns repeated.

How long do you have to know a space to contribute or enact in it? This was particularly pertinent for the second group who arrived in late August 2017 at the time of the Barcelona terror attacks. There was police presence on the way to the town. Thus, the energy of the group was more hesitant. Some felt a real a block about being in a public space. There was a larger fear of being seen as “strange”.

“I felt on edge because I didn’t understand what was allowed, and I didn’t want to offend the cultural norms.” This response is a great example of someone being attentive to their truth in relation to what is happening in the social field. This kind of awareness of oneself is essential in order to solve the inner dissonance that prevent us from making authentic and truthful decision of participation, ie, the decision not to participate just because everyone else is. Learning how to notice what fear, as well as other emotional responses, feels like in our bodies is an important part of reclaiming our power within public spaces.

Collective insights from this experience

Village increases our ability to pay attention. In 20 minutes we become a 4D model of an ecosystem in which we witness patterns of movement emerge, adapt and evolve. I find interesting the parallels between this 4D experience and how social movements grow and die. On a micro level, a pattern of movement, let’s say jumping off a bench, introduced in the town square and copied regularly by other participants, can be equated to the ripple effects that spread through our societies resulting in new cultural norms.

In this exercise through widening our awareness we are learning to understand the relationship between how we participate and the impact that has on the whole system. If our participation is alive, responsive, intune with our inner sensations whilst simultaneously being attentive to what is happening around us, we become more available in each moment, and better able to discern which actions, words and behaviours (our own and others) feel true and which ones don’t.

I have begun to use this as a tool for observing patterns of relating and co-creating cultures with migrants, refugees and local people in Regeneration Project Granada, Eroles’ new project in the south of Spain.

One Italian participant from The Apennines, expressed motivation to facilitate Village in earthquake impacted areas to sense the impact of the devastation in the body and to better understand the relationship between the ruined space and the potential of interacting anew, of creating new cultural responses.

In what other spaces can this practice be helpful? I believe that a way to find the answer might start with identifying the spaces in which we feel the most distance between our true selves and the place around us. Ultimately what we are talking about is ensuring public spaces are places for all voices and all bodies, regardless of race, ability, sexuality or religion. This self knowing process can contribute to the liberation of our spontaneous, creative selves from the repression and (self) censorship that tends to elicit within us and our bodies.

For more information about this project please visit – www.erolesproject.org

It is with much delight that we are introducing our fifth Gu...

A film by Mona Rathsman (Eroles Project) with special thank...

Our arrival to Politicking