It’s not often that I’m won in a competition.  Transition Wilmslow entered some competition thing that REconomy ran a while back in which a talk by me was the prize, they were first out of the hat, so several months later I boarded the train to Wilmslow, 11 miles south of Manchester, in the north-west of England.

It’s a wealthy town, the seat of George Osborne, Chancellor of the Exchequer, and is apparently one of the most sought-after places to live after central London (thanks Wikipedia).  Sir Alex Ferguson lives there.  It’s the only town I’ve been to which has, on its high street, an Aston Martin showroom with a car on its forecourt for sale at £118,000.  I didn’t buy it.  Like most such places though, that’s only half the story.  The gulf between rich and poor in the town was the subject of Doves’ track ‘Black and White Town’ (the band went to the local school).

Transition Wilmslow was started by Rachel Corrigan, in 2010.  Shortly afterwards, Pippa Jones was driving home and stopped at a progressive service station on the M6 (there is one apparently) and found a copy of The Transition Handbook and decided when she got home that she wanted to do Transition in Wilmslow.  She saw an advert in a shop window asking for others who were interested, and the group started to grow…

Now, in 2015, Transition Wilmslow are very active, but like many Transition groups I meet, feel they aren’t doing much.  In order to counter that belief, here is some of what they’ve done so far:

After meeting the group we went to visit The Temp garden, apple trees laid out on a triangular grid so that raised beds would fit between them.  Only one ‘triangle’ of raised beds has so far been planted but it featured all manner of veg growing well. 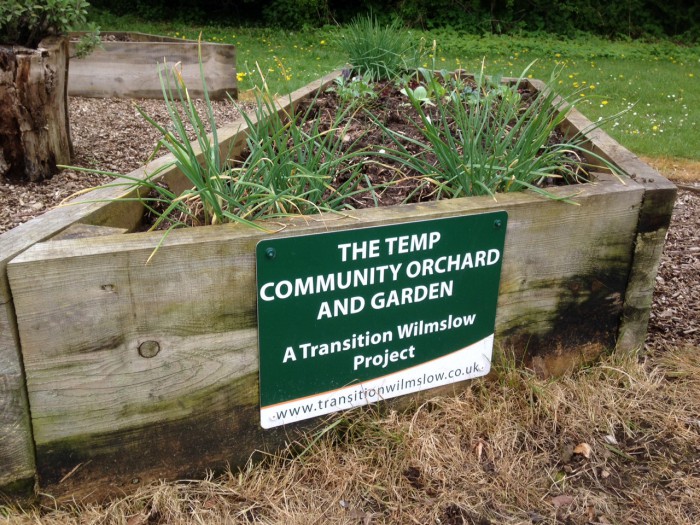 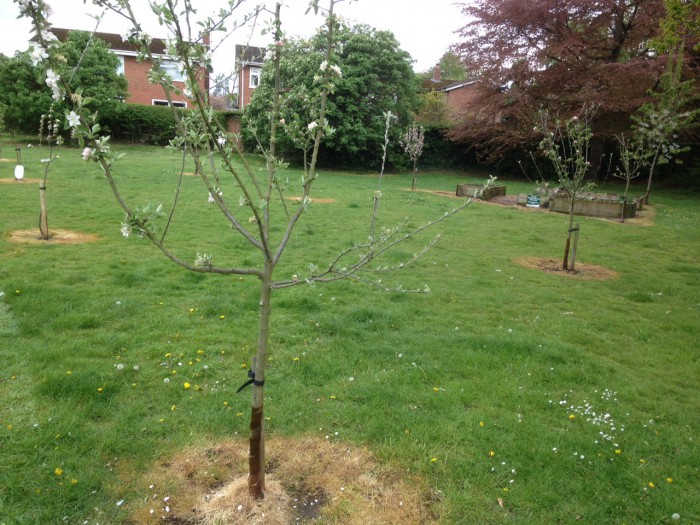 Then we walked to Lindow Moss, a huge raised mire peat bog on the edge of Wilmslow.  Lindow Moss is perhaps best known as the place where ‘Lindow Man’ (or more correctly ‘Lindow II’) was found in 1984.  This was a ‘bog body’, preserved by the sphagnum moss, since his ritual murder and burial around 2,000 years ago.  More recently, soldiers returning from the Crimean War with syphilis found themselves, understandably, not welcome at home any longer, and were kind of exiled to the Moss, where they made a rather miserable living cutting peat.

Lindow Moss has been used for peat extraction for centuries, and the way extraction rights were given had shaped the landscape.  As we entered the Moss, we passed beautiful long thin fields, bordered by very old willows, known as ‘Moss Rooms’, now turned back into grazing.  Some parts of the Moss haven’t been used for peat extraction for many years, and have begun natural regeneration to woodland.  It’s a beautiful, tranquil place with lots of birdlife. 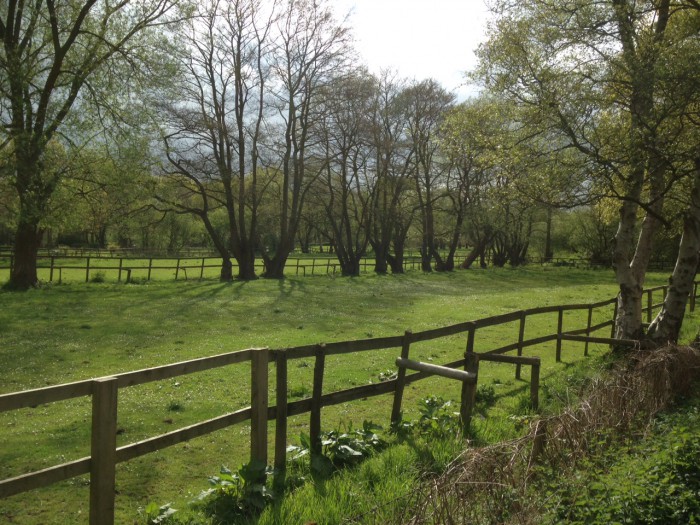 The heart of the site is another matter altogether.  The peat was laid down over many thousands of years, and 4,000 years ago was a pine forest which was then taken over by sphagnum moss.  Deep in the peat many 4,000 year old pines still exist, or at least did until the peat extraction company which owns the site began cutting the peat, and, in effect, chipping the trees where they stood.  Standing looking out at, as far as the eye can see, industrially harvested peat, is heart breaking.  Here and there there’s what remains of a stump of an ancient tree. 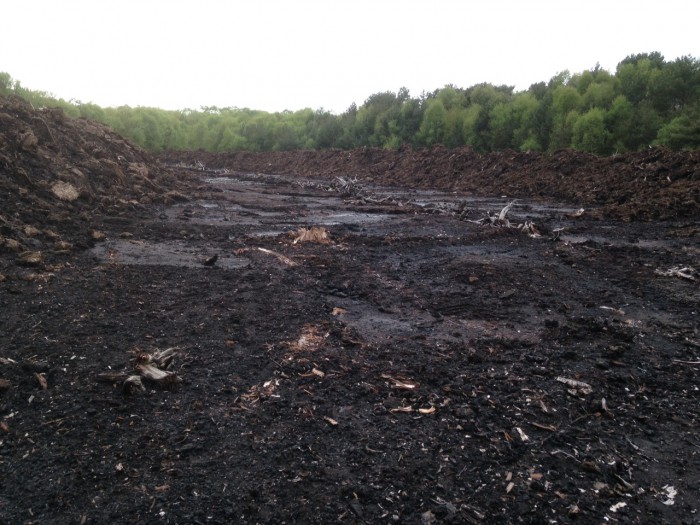 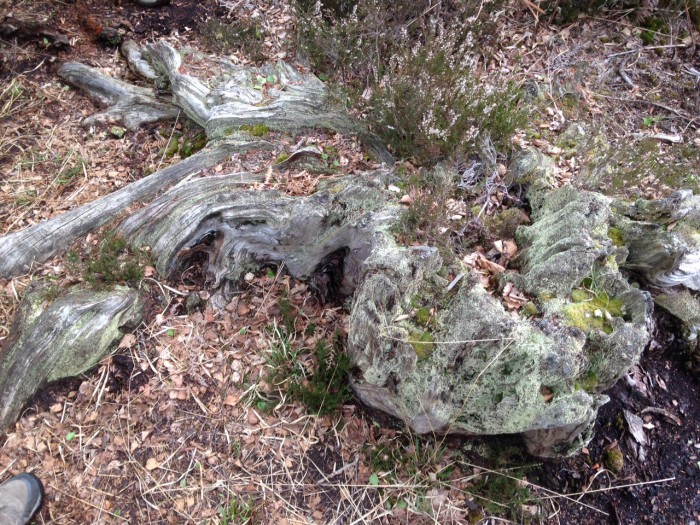 Peat bogs can hold 20 times more carbon than a forest, and are vital to the fight against climate change.  Yet here they are being torn up to provide low quality lining for hanging baskets and for compost.  The Guardian’s ‘Keep it in the Ground’ campaign feels just as relevant to Lindow Moss as it does to the Athabasca Tar Sands.  The company that own it have applied for planning to build 14 executive homes on the edge of the Moss to supposedly raise the money to resinstate the Moss as peat bog, a proposal that has divided opinion in Wilmslow, somewhat akin to a “vote for me or the kitten gets it” kind of approach.

John Handley, Professor Emeritus of Landscape and Environmental Planning at the University of Manchester, joined the group around this time, bringing huge expertise, and founding the Planning and Environment Group.  The group has been feeding into various Local Plans, their input has led to significant changes in those plans.  They also undertook a Landscape Character Assessment, surveying the local area, the Lindow Moss in particular, getting lots of people out, learning how assess landscapes and, as John put it to me, “having a lot of fun”.  Exploring the area led to a far richer understanding of it, including, as he put it, “we found ourselves in ‘informal landscapes’ (that’s overgrown, wild places to you and I) where clearly teenagers do a lot of growing up”.  You get the idea.

Given the recent application from the site’s owners for housing and reinstatement, John and the group brought together lots of local groups with an interest in the place which led to a commitment to produce a ‘New Vision for Lindow Moss’, to “restore, conserve and celebrate this unique landscape”.  They have been exploring how it might be reinstated as a carbon sink, how it might be protected and improved for recreation and exercise, how its history might be presented and interpreted (at present there is nothing that marks the site where Lindow Man was discovered.  It could also be a great site for green tourism.

Since then, the group have held a Dawn Walk for Lindow Man, on the 30th anniversary of his discovery, and run a series of events, meetings and exhibitions.  At one point on the walk we stopped to see the trunk of a 4,000 year old pine tree, a very useful thing to see if you want to get some kind of a sense of perspective on time (see photo above).  After a long and fascinating walk across the Moss, we ended up back in town, at the Friends Meeting House, for the evening’s event.  After a great potluck supper, I gave my presentation.

It’s not every day you get to give a talk on Election Night, so that was a theme I returned to regularly during the talk.  Here is a podcast of it:

Afterwards we had a great Q&A session…

… and then retired to the pub round the corner.  Next morning I met with the group and then ran me through their work and we talked about ideas for how they might move their work forward.  We talked about REconomy, Caring Town Totnes, Inner Transition, bringing some business thinking to the amazing work they have already done, and whether a community buy-out of the Moss might be an option, as a carbon sink.

It was a fascinating trip, with a great group doing great stuff.  Like every group I visit, they tell me they don’t think they’ve done much, so I ask them to tell me what they’ve done, and 20 minutes later everyone is feeling rather proud of themselves.  I said to them what I say to every group I meet who ask the same questions – when did you last pause to celebrate what you’ve done?  When did you last stop, take a breath, pat each other on the back and celebrate?  There is then a moment where everyone looks at each other and realises that, actually, they hardly ever do.  This is a marathon, not a sprint, and celebration is a key element of us sustaining ourselves. Wherever you might be reading this, please pause for 10 seconds to give Transition Wilmslow a short but enthusiastic round of applause.  Then give yourself one too.

My thanks for Transition Wilmslow for winning me (!), for their wonderful hospitality, especially Pippa and Anthony, my hosts.