The question “what’s our impact?” went with me to Israel and the West Bank, where Naresh and I were invited to run the first Transition:Launch training. As part of our trip we ran a one day Transition workshop in Bethlehem in the West Bank. Although it’s just a few miles from Jerusalem, the bus drives through a checkpoint (passports and permits are checked on the way back into the city, not out) and along the huge wall that Israel has built, including overhangs to prevent anything being dropped onto the traffic.

Naresh and I wondered what we could possibly have to offer to people living in such extreme circumstances. The piece which seemed to be most relevant and of use was about visioning. Firstly, understanding that there are four stories of the future around. Of these the one which is most useful is the one which is least seen – of “Energy Descent”, or how we make a successful, inclusive transition to a low carbon way of living.

We have written elsewhere of the “aha” moment for us – that although we appear to be free in the UK we are still constrained by those with power. We can travel freely (in Bethlehem, two participants arrived two hours late, held up at a checkpoint), and are unlikely to wake up to find our doorways blocked, or armed soldiers outside. But we are also limited in what we can build, who has access to land, what we can do to take care of the future for our children. (And of course, the rules are also there to protect us all from the wishes of people who would build things that I might hate, so there’s a process we all have to follow.. it just hasn’t caught up with the realities of our present situation). 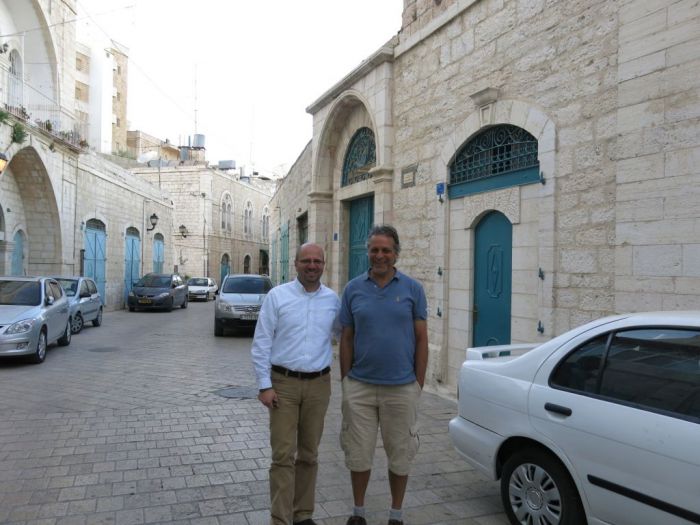 The use of Visioning to support this – to understand realistic constraints on the future, and them imagine things being the best they possibly could – also seemed to create a shift in thinking for some. Some who came already had a powerful vision of building a peace community and ecovillage in Palestine, and are attempting to build it despite finding it very difficult to get permission from Israeli authorities. For others it was to vision a local street where the shops have largely closed down as a bustling busy thoroughfare again and imagine the partnerships and conversations that would be needed to help this move forward.

There’s something about the intensity of Israel and the West Bank, the feeling that situations of life and death, belonging to the land or exiled, peace and war, are ever present, that stayed with me throughout our visit. In Jerusalem we visited the Holocaust museum, and were reminded of the horrors of that time. It’s was striking and painful to see the documentation of the early days of the Nazis in Germany, the constriction of freedoms, intimidation, and disregard for a people’s lives, having just come from Bethlehem, and hearing echoes in the stories from people there. We reflected with Israeli friends later on how the unhealed scars of the past can recreate past situations in the present.

How can Transition have an impact in such circumstances? I realised how important the capacity for visioning is, that in a situation where there is very little freedom, the willingness to vision something different can be a radical and empowering act. Perhaps the circumstances are very constrained in terms of freedom, or resources, or people to work with. But still we can acknowledge reality of what is, and create a vision for something better, even if it’s only something small within my inner world – where I choose to put my attention, to see beauty, or remember something I love rather than focus on my fear or hatred. And the act of doing so frees me from a state of fear or hatred, giving me some control and choice within my life. 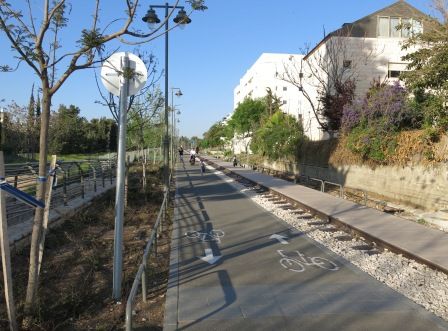 In Israel we met people already creating community gardens, working with residents in city areas to create more connection, beauty, recycling. One local group inJerusalemhad saved a whole strip of land that used to border a railway line from development. Now it’s a series of parks, a community garden, and a cycle and walking path that – unusually – links and brings together people from the different neighbourhoods it passes through, who otherwise rarely mix. The Transition: Launch workshop in Haifa was a success at least in bringing together many people in Israel working for similar ends, and supporting them to network. And as often is the case I felt that Transition had some unifying vision to offer, to see how each is working for a piece in a larger, meaningful whole.

As ever with these trips I felt I learnt at least as much as I could offer to others. I am deeply grateful to all those who gave us their time and hospitality, and shared their journey and learning. I often say that running trainings is the best job in Transition, bringing the opportunity to meet and work at depth with people in different countries who share the same impulse to create a system that really works for everyone, now and in the future, for humans and for all life on earth. This visit left me feeling inspired by the courage and love I saw in action, whether in the West Bank or in Israel, and moved by the depth of difficulty and suffering people have experienced – in past generations or in the present. I felt connected to the resilience of the healthy part of us as humans, the part that longs to heal the past and create peace in the present – which is as strong among Israeli activists as it is in this country. An impact for which I am very grateful!

I want to end this piece with some writing of Victor Frankl, a prominent Austrian psychiatrist in the 1920s and 30s, who spent three years in concentration camps under the Nazis. It’s not directly relevant to this writing, but there’s something about the choice that we humans can make, even in extreme circumstances, that reflects something about the spirit of Transition. He describes walking through the freezing night as part of a forced labour group, and calling up the feeling of love through the memory of his wife. It starts when the man next to him whispers:

If our wives could see us now! I do hope they are better off in their camps and don’t know what is happening to us.”

That brought thoughts of my own wife to mind. And as we stumbled on for miles, slipping on icy spots, supporting each other time and again, dragging one another up and onward, nothing was said, but we both knew: each of us was thinking of his wife. Occasionally I looked at the sky, where the stars were fading and the pink light of the morning was beginning to spread behind a dark bank of clouds. But my mind clung to my wife’s image, imagining it with an uncanny acuteness. I heard her answering me, saw her smile, her frank and encouraging look. Real or not, her look was then more luminous than the sun which was beginning to rise.

A thought transfixed me: for the first time in my life I saw the truth as it is set into song by so many poets, proclaimed as the final wisdom by so many thinkers. The truth – that love is the ultimate and the highest goal to which Man can aspire. Then I grasped the meaning of the greatest secret that human poetry and human thought and belief have to impart: The salvation of Man is through love and in love. I understood how a man who has nothing left in this world still may know bliss, be it only for a brief moment, in the contemplation of his beloved.

In a position of utter desolation, when Man cannot express himself in positive action, when his only achievement may consist in enduring his sufferings in the right way – an honorable way – in such a position Man can, through loving contemplation of the image he carries of his beloved, achieve fulfillment. For the first time in my life I was able to understand the meaning of the words, “The angels are lost in perpetual contemplation of an infinite glory.”

Man’s Search for Meaning, Part One, “Experiences in a Concentration Camp”, Viktor Frankl,