When Hay on Wye was threatened with a new supermarket in what appeared to be a cosy done deal between the local authority and a developer, a group of local people responded with a ‘Plan B For Hay‘, bringing together architects, lawyers, designers and campaigners to create an alternative, viable, more popular scheme.  I spoke to Mark Hainge from the group and asked him to tell me more.

Can you tell us the situation that led to the formation of Plan B For Hay?

The local authority, Powys County Council, had agreed to give the land and buildings of the present primary school to a local developer, who wanted to use the land for retail purposes.  In exchange, the developer promised to build a new school on a new site (you will find the original press release at the end of this post).  There were two main issues here:

b)      “A retail development” – which we took to mean a supermarket – would eventually kill the thriving network of small independent shops that currently thrive in Hay on Wye. 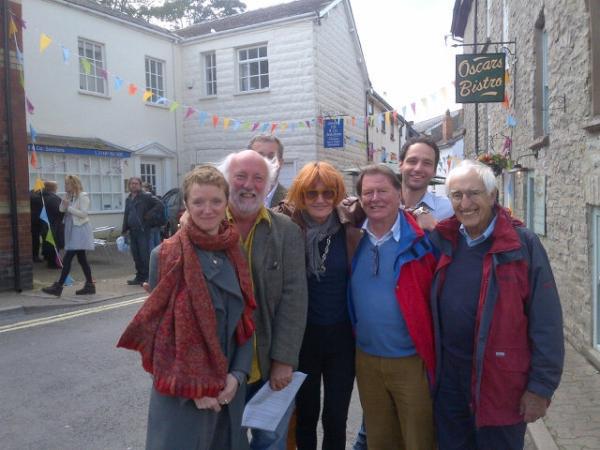 How did the community respond?

There was a degree of opposition to this proposal.  Plan B was formed to give this opposition a voice and a focus.

What kind of engagement did this include with the local authority?

Plan B sought dialogue with appropriate Cabinet members from the local authority, sometimes successfully.  And we prepared a comprehensive consultation document which we sent to key stakeholder individuals including local authority councillors, local MPs and Welsh Assembly members, members of Hay Town Council, Brecon Beacons National Park Authority and others.

What does the proposal that started Plan B for Hay, a secret deal between a developer, a school and a supermarket, tell us about the way that development deals tend to be made these days?

I dread to think.  The key lesson for us was to take nothing at face value and always to be ready to expose what the yellow press might call ‘dodgy deals’.  Another important lesson was never to underestimate what can be achieved by individuals operating together in the face of local authorities and big businesses.

Part of Plan B was the effort to discredit the Council’s Plan A. How did you set about doing this?  What was the nature of the case you built?

We set out the reasons for concluding that a new supermarket would kill local traders in Hay.  We also exposed the local authority’s lack of consultation of local people and its refusal to release details of agreement with the developer to the local community.  In parallel we conducted a wide ranging survey, sending out 3,000 questionnaires to local people asking for their views.

With 1,000 replies we felt we had a convincing body of evidence to support our assertion that local people did not want a supermarket, did not want a new school to be built using developer’s money, and did want the local authority to provide the new school in line with its legal responsibilities.

What did challenging this reveal about how Powys Council behave?  What dark corners did your work shine light into, what surprised you?

It showed that they seemed to have a high handed approach to what people in Hay wanted.  They also seemed to be happy to ignore EU procurement rules – or they had no idea that such things existed.  And they clearly enjoyed a very cosy relationship with the developer, who had been awarded a contract to build a school in Brecon, only to apparently go bankrupt not long after they’d started the job.

Alongside this, you also created a Plan B, an alternative approach.  How did you assemble the team capable of doing such a thing?

By calling for volunteers to help to fight the local authority proposals, highlighting what skills would be particularly valuable.  We were lucky in that Hay seems to attract a proportion of such people with a very wide range of skills – and a high degree of adaptability to flex other skills to the benefit of Plan B.

Can you outline the proposal created by Plan B?

Not in a few words!  A digital copy of our consultation document, which sets this out in detail, is attached at the end of this blog. 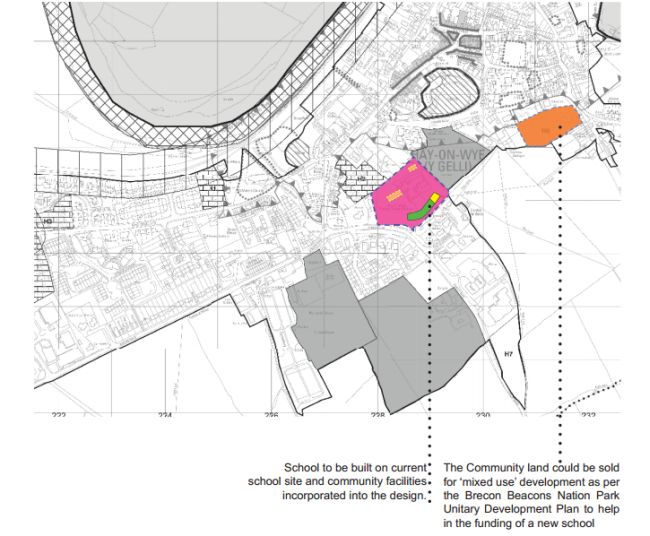 Issues around supermarkets can be very divisive, with some who want them due to the perception of low cost and those who don’t want them being portrayed as NIMBY’s, anti-progress or as those wealthy enough to live from local independents.  Did you encounter these splits, and how did you manage them?

As you say, this issue did highlight a split in the community.  Those tensions remain unresolved, although they’ve sunk down below the parapet once more.  But in some senses Hay and surroundings harbour a chronically split community.

The English/Welsh border runs down the eastern side of Hay, so many local people live under an English local authority while others are in Wales.  There is a high proportion of retired people, creating an age split.  And the socio-economic differences within a community made up of rurally employed local people mixed in with relatively well-off incomers also brings tensions.

So the supermarket debate didn’t so much cause a new split as highlight an existing one.  But feeling did run relatively high for a while, and the detractors of Plan B still complain that the town would have had a nice new school by now if it hadn’t have been for Plan B…

How has the situation resolved itself?  What is the current situation?

The local authority publicly announced about 18 months ago that it was going to abandon its proposed deal with the developer, and instead it was going to seek funding from the Welsh Assembly to pay for the new school.  However, it also announced a delay in the completion date for the new build, shifting it from September 2015 to September 2016.  And since then it has announced a further delay to the new build, pushing it out to 2017.

What, do you think, is the power of creating Plan B rather than just objecting to proposals?

The key advantage is one of coordination.  Instead of presenting the local authority with a constant drizzle of individual complaints and observations, which it could ignore with relative ease, we were able to harness our voices to launch a single, harmonised opposition to the local authority plans.

Not only that, but by combining our ideas and suggestions we were able to come up with a far more detailed, forward-thinking and ultimately convincing plan of attack.  And finally, it was easier to keep our morale and belief in what we were doing by banding together rather than working as disparate individuals.

What advice would you have for communities that are facing similar challenges?  What would you say are the key learnings from your experience?

Advice – work together.  Believe in yourselves.  Seek weak spots in the local authority’s plans; remember that they are almost certainly not as dedicated or experienced as you are, so you are pretty well bound to win if you choose the right battles to fight!  Never, ever, give up.

Learning points – your local community probably harbours a far wider range of skill sets than you might suspect.  Local people will probably welcome your campaign if it lets them give voice to what concerns them most.  Don’t be afraid to ask for money.  Use digital and social media as much as you can.  Draw in as much support for your cause as you can from outside the local community as well as within it.  Carry out a survey – questionnaires worked well for us – generate the evidence you’ll need to support your case.

Also, Plan B set up a parallel organisation called Hay First which was a legal entity without any real value so it couldn’t be sued or in other ways made vulnerable to a legal attack. Hay First then sent a legal letter to the Powys County Council challenging the lack of consultation and also the procurement process they had gone through in striking a putative deal with Gaufron, the development company, that Powys CC had identified as its partner in doing deal for developing “a retail establishment” on the school land.  The key point is that the Hay First letter threatened a judicial review to check procurement processes which they knew were faulty.

What would you say were the long-lasting legacy of Plan B?

It’s really too soon to say.  But it was very encouraging to see a body called Hay Together emerging in the middle of our work. People became aware that some of our work had implications for other community groups in the local area – but we were strictly limited under the terms of our constitution to what we could get up to.  So Hay Together formed in order to give ALL the local groups and clubs, etc a forum for coordinating their efforts.  It runs on to this day and has an office in the Castle grounds.

As to what we’d hope to leave as a legacy – I’d say that a healthy thriving High Street full of local independent traders, and a modern primary school (in time) would be the key short term things to hope for.  In the longer term, perhaps we’d hope to generate an awareness in Hay and in other communities around the country of what a well coordinated local campaign can do to keep communities the way that local people want them, rather than big business.