This month our theme has been Transition and Politics.  Here we digest into bite-sized pieces the month’s output to make it easier for you to find what interests you.  We started with our editorial which asked “Is Transition political?”, whose conclusion could be summarised in the following paragraph:

“The answer is yes.  Deeply.  It has the power to transform communities, economies, shift power back to the local level, encourage communities to own their own assets and be more in control of their economic destiny.  To create new food systems, economic systems, education models, and so on and so on.  You know this stuff.  It’s deeply, profoundly political.  But it isn’t explicitly so. It comes in under the radar, and that really matters”. 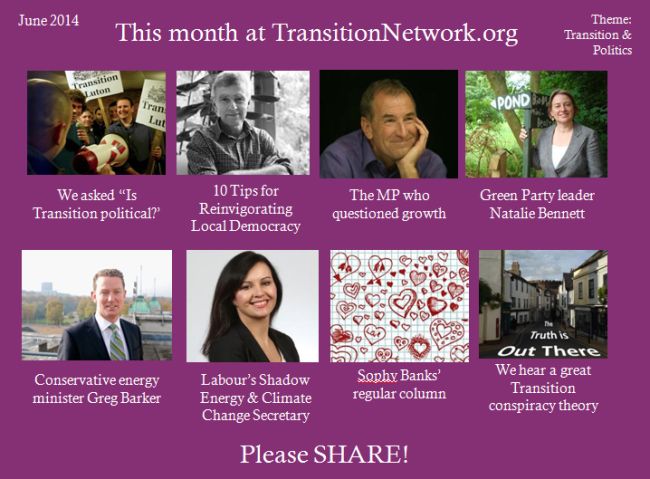 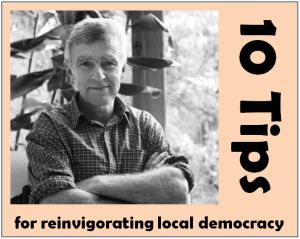 Peter MacFadyen, Mayor of Frome and one of a group of Independents who ran for, and were elected for the Town Council, shared the Independents for Frome story.  He also, over the month, shared his 10 Tips for Reinvigorating Local Democracy.  We heard a great new Transition conspiracy theory, and what such a world view tells us about the failure of politics.  Philip Barnes shared the findings of some research he did into the relationship Transition initiatives have to politics and his conclusion that it’s time for Transition to come out from under the radar.

Former MP Alan Simpson, the only person we know to have questioned economic growth while still in office, shared the experience.  He also shared what he thinks should be Transition initiatives’ ask of candidates at the next election. “Transition has enormous strength at the moment”, he told us.  Social Reporter Sarah Ayech reflected that “Transition is all about politics”, and argued that:

“Transition requires an analysis of power, and an honest discussion about what we can and hope to achieve”. 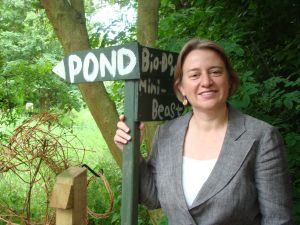 One of our aims for the month was to interview someone from each of the political parties for their views on Transition and issues of relevance to Transition.  In the end, the LibDem MPs we approached didn’t answer our emails, and the man from UKIP never rang back having said he’d do it, so we ended up chatting with just three.  Natalie Bennett, leader of the Green Party of England & Wales, told us “we need to relocalise our economy, bring manufacturing and food production back to Britain, to rebuild small-scale manufacturing, building things that last”.

Greg Barker MP, Minister of State at the Department of Energy and Climate Change gave us an upbeat assessment of the UK government’s achievements on decarbonising the economy.  “The bottom line is”, he told us, “that we are bang on track to meet our ambitious 2050 emissions target and the UK now enjoys the highest economic growth in the G7”.  He also shared his huge enthusiasm for community energy, speaking of his “vision of an energy sector not of the Big 6 but of the Big 60,000″.

Caroline Flint MP, Labour’s Shadow Energy Minister, told us that “we are sleepwalking into a national security crisis on climate change“.  Asked how Transition initiatives could help her achieve her ambitions were she to become Energy minister, she stated:

“Government can lead the effort, but all of us – business, trade unions, councils, civil society, communities, families and individuals – must work together to imagine and build the country we want and the kind of planet we want to live on. Civil society can help lift the ambitions of politicians and Governments. Each one of us has a part to play, and only by uniting will we realise those ambitions”.

Sophy Banks, in her monthly column, shared her thoughts on what politics might look like were it “to orient to what truly makes us happy as humans, including creating peaceful and sustainable communities“.  We had also hoped this month to speak to Owen Jones, one of the founders of the Peoples Assemblies, and what they tell us about engaging people in politics, but he has been very busy finishing off his new book and so it just didn’t quite happen.  Perhaps another time.

So that was your month on Transition and Politics.  Next month we’re looking at ‘Celebration and Transition’. See you there.