Naresh: What do you think has triggered the high demand for these workshops?  Did you use any particular social media strategy, or was it word of mouth?

Claudia: We didn’t use any special social media strategy.  We promoted the workshop mainly posting the event on Facebook, distributing flyers and by word of mouth.

There were two factors that contributed a lot to the success of the training.

One was the collaborative work that involved the entire process of the workshop; from marketing and pre production through to post production. Participants co create everything with us, which develops a depth of commitment to the whole process. We all paid attention to ‘head, hands and heart’ at every stage. I was touched by how hard people worked to get these workshops to happen and spread the word.

It is very different from having me, the facilitator and the co facilitators doing everything, or from having a paid person doing the work. It created a wave that goes beyond the sense of obligation, a desire to make it succeed from everyone involved. The process was based on self-management, we exchanged ideas about the flow but without a central person giving strict guidelines.

The second factor is that the training was offered as a conscious financial exchange. I believe that rethinking our relationship with money is part of our transition process. All the costs were displayed for participants and they were invited to think about the value of what they were receiving from us. We then let everyone decide how much to pay for the work we were offering. For us facilitators, we felt passionate about offering these trainings; the financial return wasn’t our priority.

I think that it is really important for people to believe that they can make a difference in the world. When we work together with others, we can manifest the kind of community we want to live in.

For me, this is the power and the beauty of the Transition Town movement. It unites people from all over the globe around one dream: to create a better world.

Naresh: This was your first training after having completed the Train the Trainers in Chile last November. What are you impressions of Transition Launch?

Clauda: It was very exciting. I was a bit nervous because it was the first time that I facilitated the workshop and I am very happy with results.

The training is very moving for people as it takes them out of their comfort zone in really simple yet moving ways. Transition Launch is a very powerful model for learning and exchanging ideas. Many people who participated in the training kept talking about the experience, how deep it was for them and what they felt about the journey.

We followed most of the original program but with some adaptations. We decided to base the Word Café on the community involvement aspect of Transition and we used the Open Space to explore more about the inner aspects of Transition. Specifically we explored different ways to see how our beliefs led to our behaviours and how we could transform our beliefs.

Also, based on the Brazilian situation, we thought it was important to talk about new economies (this is still new in the country). Based on people’s feedback, we wanted people to leave with tangible tools that enabled them to co-create projects in a collaborative way. 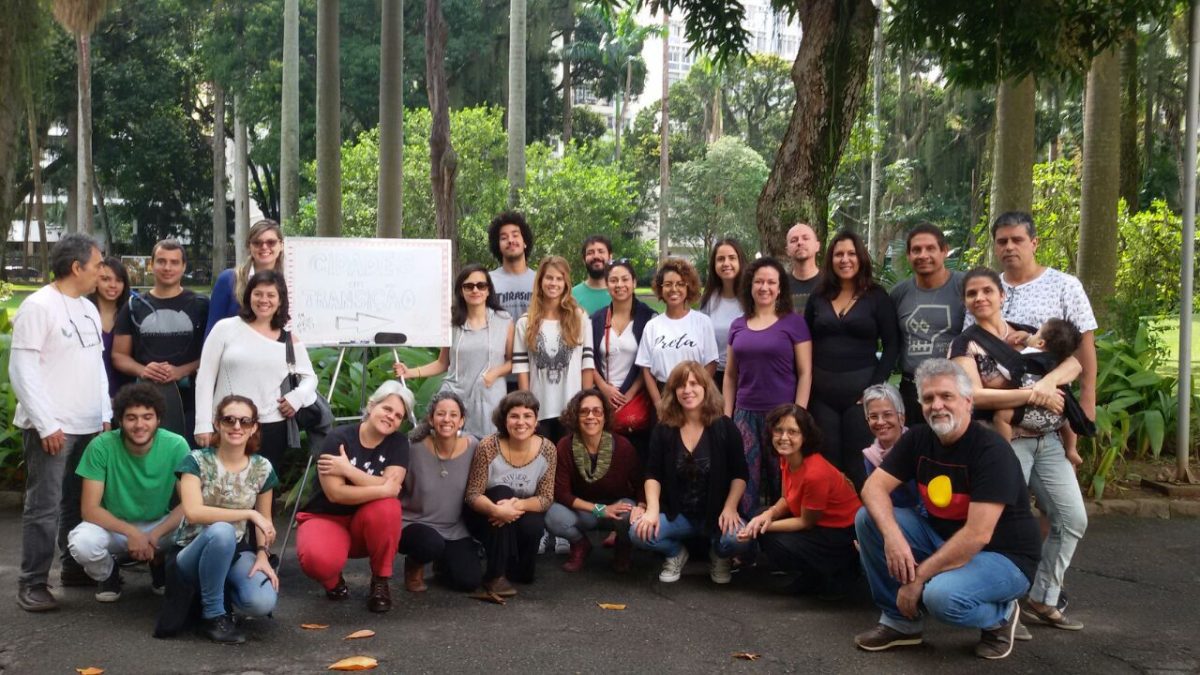 Naresh: You had people from more than 15 neighbourhoods take part in the workshop, including people from favelas as well as very wealthy areas. What was it like to such a diverse group?

Claudia: It was very rich to have such diversity in the training. It is rare because usually these events are inaccessible to the very poor, either because the cost is too high or because the information does not reach them. We have been careful to contact people who in some way or another are in contact with low income people / communities to advise them of the opportunity.

Naresh: Did you include any structure or exercise that enabled people to listen to each other’s experience and build understanding and empathy?

Claudia: We opened up enough spaces for listening and exchanging ideas. We did not do any empathy exercises, but everything flowed with great harmony and people were very interested and respectful of each other. We created safe spaces for exchanges where everyone felt equal and could speak freely. 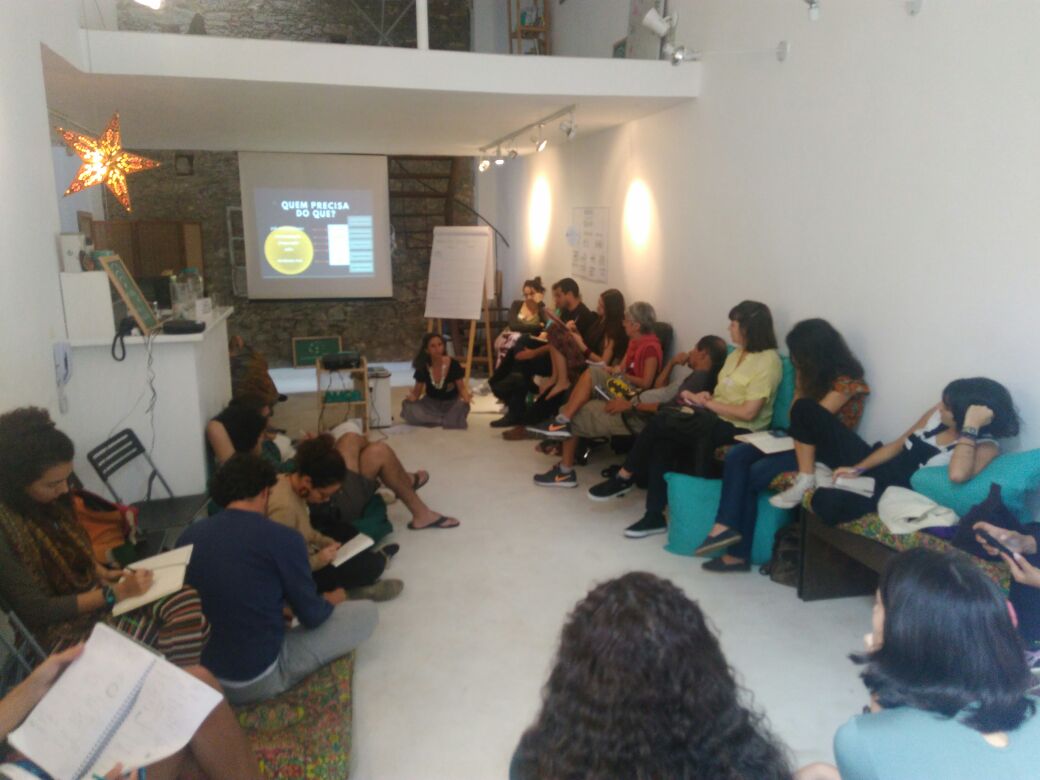 Naresh: The follow ups after the workshops seem like a really good idea. How is that working?

Claudia: The first meeting brought together all the people who were interested in thinking about the next steps after the training.  During this meeting, they decided to organize themselves according to three geographical regions, north, south and central. From there, it was agreed that each territory would meet independently. As more people come to these meetings from each territory, the groups will subdivide again based on neighborhoods and begin to work independently.

The southern area had their second meeting last Saturday. They began mapping the needs of each neighborhood and the personal interests of each person present. They came to the conclusion that before they start to develop any project, they need to listen the community and some have developed strategies to do this. For example they are developing a questionnaire to be answered online or in person. They are intending to have a stall in the local organic market, and in the local favelas they will record videos with testimonials. They are also identifying potential partnerships in their neighbourhoods.

The Central Group is doing something different. They want to get their hands dirty and do something practical right now.

Naresh: You said ‘the events went way beyond your wildest  expectations’. Can you tell us more about this?

Claudia: Everything, from the beginning to the end went beyond my expectations. The collaborative process in organizing the workshops flowed in an incredibly easy way. The way I surrendered to the process, letting go of my instinct to control was quite surprising to me personally. I am working consciously on this but I normally tend to control things when I am doing it for the first time. The impact that the workshop had on people and their positive feedback was amazing. And the level of people’s commitment, and the following up groups and what they have accomplished so far has been incredible. 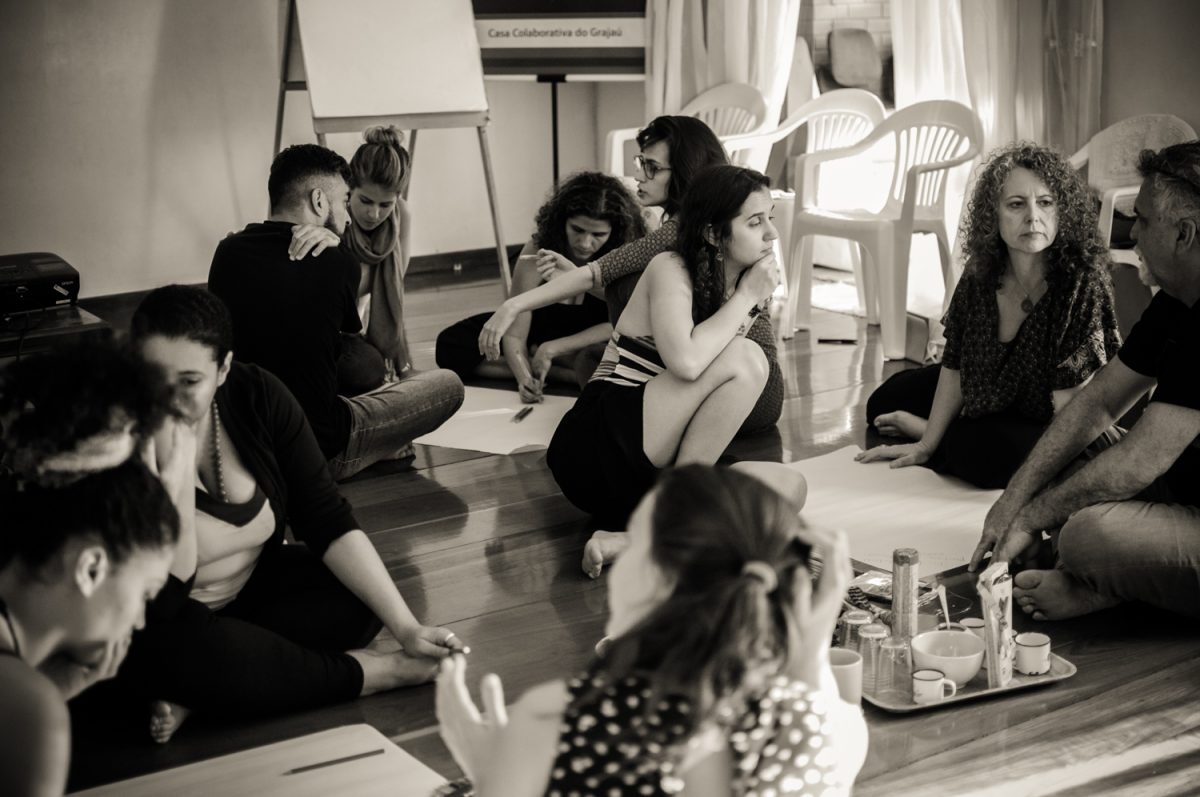 Naresh: I hear Transition in Rio is active again. Why did it go dormant? Why do you think it is awakening?

Claudia: I think that the movement stopped due to a number of key members diverting their efforts to other projects in life. This was partially stimulated by unresolved conflicts.

During this time people continued working with their own inner transition which created a fertile ground for the new seeds of the transition movement to grow. The workshops helped create a moment where people could come back to themselves; to their stories and questions. That’s why the movement now reappears in such a beautiful way. I think people are more mature now and ready to be together despite prior differences. It’s the emergence on the outside of what has been being worked on internally during this period of dormancy.

Another reason that contributes to the awakening of the movement is that the political, social and economic moment in Rio (and Brazil) is very delicate and people are beginning to realize that they need to do something. This perception is still somewhat limited to people who are already ‘awake’. But, slowly, more and more people feel the need to do something by themselves instead of waiting for ‘solutions’.

Naresh: You inspire me Claudia. Do you have any final words for us?

Claudia: Thank you, Naresh. The Transition movement has deeply inspired me since I first came into contact with it in 2009. For me, one who was never involved with any type of grassroots movement before, it was a life changing experience.

Since then, in the process of co-creating strong and vibrant communities I’ve been having a lot of fun, making many new friends and met lots of interesting people.

I think that it is really important for people to believe that they can make a difference in the world. When we work together with others, we can manifest the kind of community we want to live in.

For me, this is the power and the beauty of the Transition Town movement. It unites people from all over the globe around one dream: to create a better world.

Naresh: Thank you so much Claudia for sharing your experience. I hope others both in Brazil and around the world can learn from your ability to integrate Transition practices and values into every aspect of these trainings in a trues expression of the power of heart. You demonstrates how when we trust what we have learned from ten years of doing Transition around the world, that it works.

Transition LAUNCH is packed with imaginative ways to delve into the practice of Transition, showing you how to set up, run and grow a Transition initiative. It is also useful for people who have recently become involved in Transition and want to develop the essential skills and insights to help their Transition initiative become a success. It has been delivered hundreds of times in over 35 countries worldwide, gathering and spreading the emerging, collective wisdom of the Transition movement.