Transition Training conducted a survey to assess the impact of the Transition training in May 2011. The survey had a great reply ratio and got a lot of invaluable feedback. Thank you all for completing it! This is a high level review of the results. If you want a copy, you can download it directly from this news item (the link is at the bottom of this page) and if you want more information on training generally please email Naresh.

Transition Training has been offering a two day training course since October 2007. Over 1,000 participants were contacted in May 2011 and 145 people have taken the time to respond to a survey designed to explore the impact this training has had and a further 15 have given input by email or phone.

An overwhelming 86% of the respondents, who are mostly UK based, are still active in transition.

This compares well with 54% involved in a TI when they did the training. 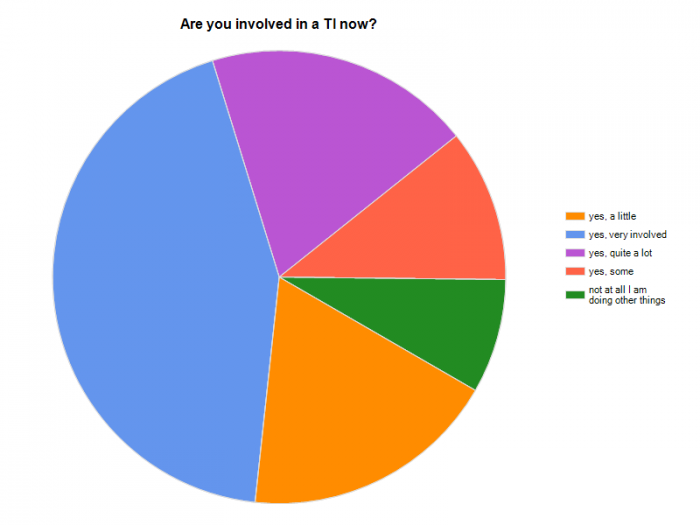 Initiatives have been involved in many awareness raising activities, including liaising with local government, but only a few have been able to create jobs from their work (8.6%). Of these the main areas of employment have been in administration, publicity, workshop facilitation, renewable energy sales, building, and one farm share position in Norwich.

These have either been temporary part time funded positions, or self employed initiatives.

Several respondents indicate a plan to move in the direction of more employment with social enterprises, working with local councils, the Reconomy project, and working more closely with schools and FE colleges.

Many initiatives have a bank account and a constitution and though the majority report having good groups that work well and good relations with other local groups, big challenges for many are:

Many comments responding to the question “What are the challenges?” can be summed up by what one respondent wrote: “Resources! – people and money!”

A small but significant number of people reported difficulties arising from challenges arising from working in a group, and some were aware of the tension between keeping task orientated and stepping back to pay attention to group communication, consider progress made and next steps, as well as staying sufficiently informed about current affairs and trends.

A few comments were made about the challenges of inclusion; particularly of the working classes and young people, and moving people from names on mailing lists to actively engaged members. Commitment, sustaining involvement and integrating new people were seen as things to be addressed by some, including the issue of paid work.

For some initiatives there are particular challenges; such as shifting populations, and size of city. Publicity was seen as obtrusive by some and not sufficient by others. Founder members moving on from the position they had held without clear handover procedures has left some floundering. 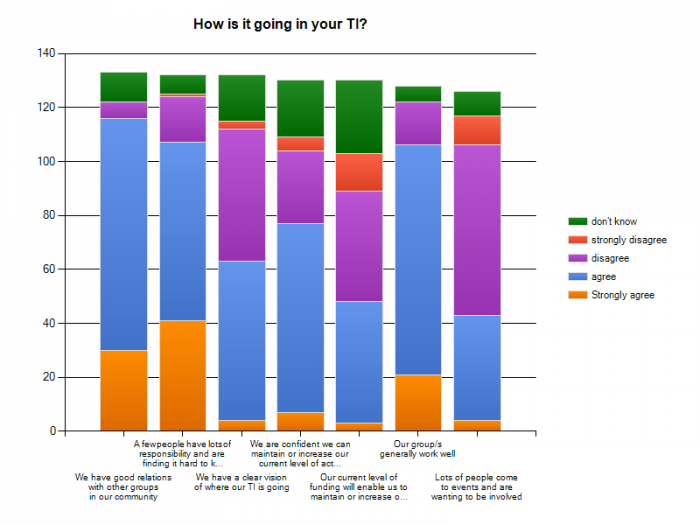 When asked the question, ‘What’s going well?’, over 90% of respondents answered that question.

What is happening in Transition Initiatives?

Lots of energy fairs have taken place, there have been practical skill shares, lots of film showings, a visioning day, and more unusual projects such as the “DraughtBusters” workshops in Belsize Park, and the Gaskateers work on street lighting in Malvern.

For many, meetings of their core group have become an important and satisfying part of their lives.

What have you done as a result of attending the Training?

92% of respondents said that they had personally gained new insights into Transition as a result of doing the training.

Almost 70% of people said they had gained in confidence to be able to present about peak oil and climate change, well over half said they had spent more time on getting to each other activities, had done more outreach work, and ensured there was space to air feelings in their groups.

Over 80% felt they better understood the role of Transition Network and the support they could receive and in excess of 90% said they now felt part of a national and international movement. 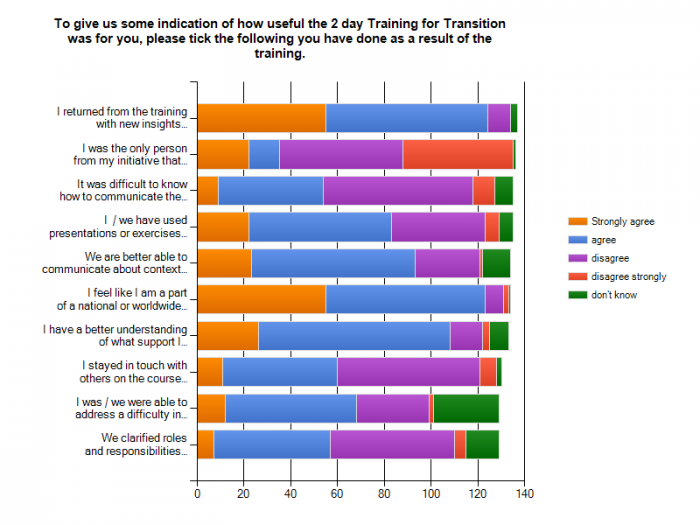 Was the training useful?

Overall a vast majority of 96% people said that they had got something out of the training, more than 86% that it had been useful to their initiative, and almost 95% said that it was good value for money. 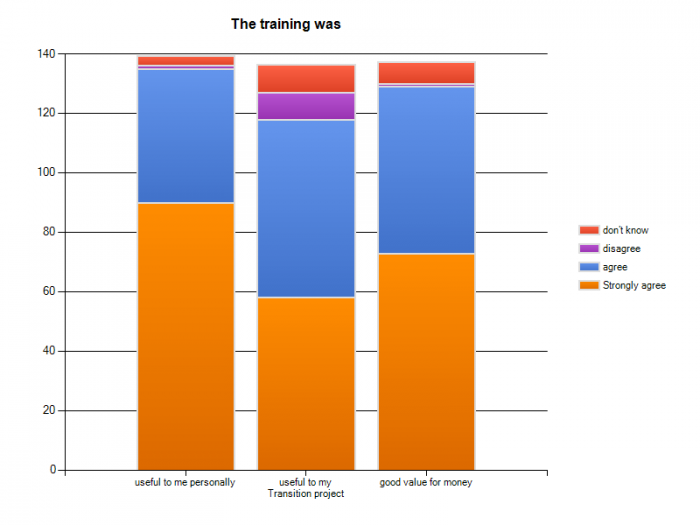 Looking Forward – what training do you need?

Of the list of suggestions for areas to be targeted in future trainings, nearly all items were received favourably, ie more than 70% interest. Probably the most popular (in excess of 80% and as high as 92%) were: 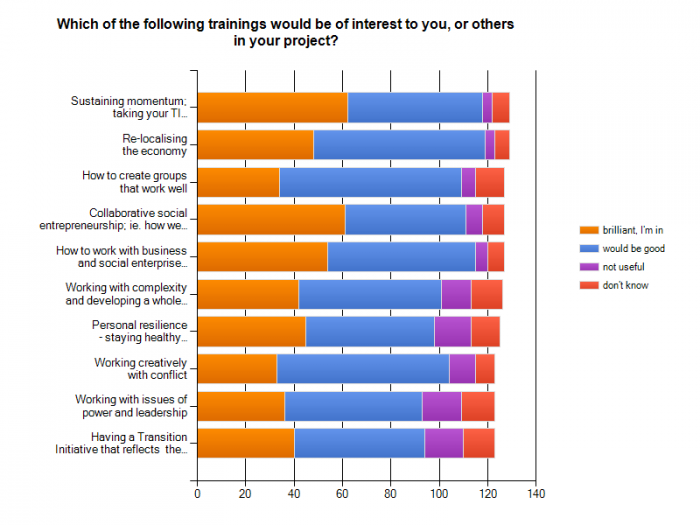 The majority favoured weekend courses and the majority liked our 2 day format.

Transition Training has been received very favourably, is considered to be good value, worthwhile, and has enabled people to reach out more effectively, consider the relational aspect of working together, generate considerable practical traction for their initiative, and to better be able to communicate about peak oil and climate change.

Some of the things people would like more of are more signposting of comparable courses, courses offered on specific areas, more availability internationally, and more keeping up to date with current developments.

Reflecting back on their experience of doing transition people have found they are being successful in practical projects, particularly around food, and have felt particularly challenged by lack of resources both human and financial.

Ways forward seem to be around social enterprise and learning to work better with one another in groups, as well as learning to manage the tension between task based and process based approaches to transition.

Words repeated over and over when referring to the training were “inspirational”, “keep going”, “blessings”, “you are doing a great/fantastic/brilliant/terrific job”, “brilliant, keep it up.”.

Reasons for not responding

Finally, from those that did not respond to the survey but who still chose to give input the main reasons given were:

Anyone wanting access to the full survey report, you can download it from this item (see below), and for more information generally please email Naresh.

Naresh Giangrande and Steph Bradley
On behalf of Transition Training

The following places were represented