Transition Dorking’s Golden Ticket team took centre stage at the NEC Retail Spring Fair last weekend.  Invited to speak as part of the ‘Trends’ programme the Golden Girls shared their experiences of setting up an initiative aimed at increasing footfall on the high street – the highs and the lows!

‘This was a great opportunity to share what was learnt with others thinking about doing something similar as well as retailers interested in connecting with their community groups,’ said Sally Elias. ‘Small independent retailers have so little time to spend on promotion so it makes sense to work smarter and share expertise, energy and experience with others.’ 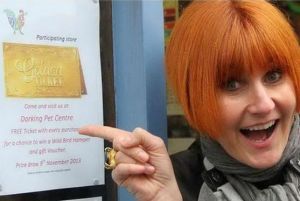 We did a big ‘shout out’ for the Transition Towns movement as many people still haven’t heard about it! We had a chance to share other initiatives with people we connected with on the day.

Bringing Dorking Together is a new group that has emerged from the November event to support the high street across the next year. Originally drawn together as the ‘meet and greet’ party for Mary Portas it has decided to continue and focus on projects such as re-launching the Visit Dorking website, improving co-ordination of events and improving and enhancing signage in  the town centre.

For their part the Transition Dorking members of this team are holding a surgery for retailers and members of the public to share ideas about how to enhance the town centre on Friday 21st and Saturday 22nd of February running from 10 until 4, both days. The venue, to be in the town centre, is to be decided.