Our theme this month has been ‘Rethinking Real Estate’.  It began with an editorial piece, Why I’m Proud to be a SWIMBY, which framed the month.  It introduced a new term, SWIMBY (as in “Something Wonderful In My Back Yard”, as opposed to NIMBY), and outlined a ‘SWIMBY Manifesto’.  It built on John Thackara’s question “is it beyond our creativity to provide our fellow human beings with shelter and sustenance without covering more of the world in concrete?”.

One of the case studies of a different approach was of Lilac Co-housing in Leeds, which is modelling a different ownership model, strawbale houses, and really offering a rethink of more conventional approaches.  We talked to Paul Chatterton from Lilac who told us more. We talked to Tony Greenham of New Economics Foundation about housing bubbles: how they are created and the risk they present. 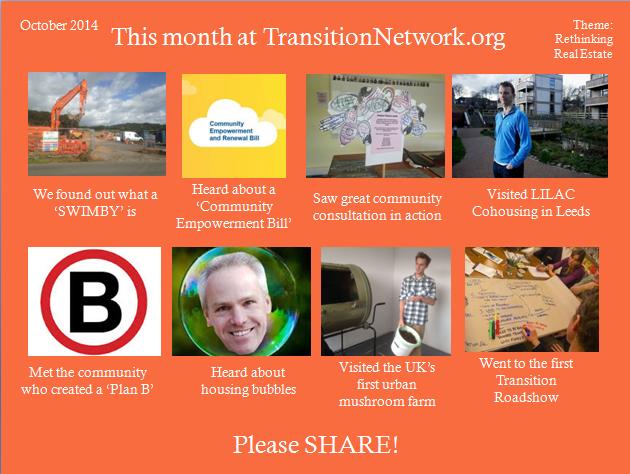 We called in to a formerly empty office block in Exeter which has been converted into the UK’s first urban mushroom farm by GroCycle, and speculated on the potential for urban agriculture in such settings.  The question of urban agriculture was also explored in an interview with possibly the world’s leading authorities on the subject, Andre Viljoen and Katrin Bohn, authors of Second Nature Urban Agriculture.  The interview explored both the challenges and opportunities of urban agriculture.

We also looked at the reality for communities in trying to influence the planning/development process.  Two Transition initiatives shared their experience of trying to engage with planning in their community and bring a Transition perspective to it, Transition Market Harborough, Transition Belper and Transition Chepstow.   Amy Burnett shared her Transition Guide to Neighbourhood Planning, an indispensible guide to how to engage with and influence the Neighbourhood Planning process.  Angus Hardie from the Scottish Community Alliance told us about the forthcoming Community Empowerment Bill in Scotland, including its rather exciting Absolute Right to Buy (a kind of Community Compulsory Purchase Order).

We heard the story of Plan B for Hay, where a community, appalled by a proposal for a new supermarket in their town, came up with an alternative scenario which ended up changing what happened on the site.  We dropped into the consultation happening around the Atmos Totnes project to hear, in a podcast, what good consultation looks like (and sounds like).

Site editor Rob Hopkins has been on the road a fair bit during the month too.  He told us about his trip to Paris to launch the French edition of The Power of Just Doing Stuff, to St Andrews for the first Transition Roadshow there (jointly with Mike Thomas), to the New Forest to see their ‘Live and Unleashed’ exhibition, and lastly two days in Bologna helping to shift Transition up a gear there.  Transition Network’s International Co-ordinator Ben Brangwyn has also been travelling, and he wrote up his experiences at the German National (Un)Konferenz which sounded wonderful.

Finally, not really anything to do with our theme, but Fiona Ward asked Is gender an issue in Transition?.  And Rob had a rant about people who say “at the end of the day”.  And that’s it for October.  November is going to be a kind of “anything goes”, theme-free month, to allow us to catch up with ourselves a bit after a month’s mad dashing around.  We hope you enjoyed our theme this month.