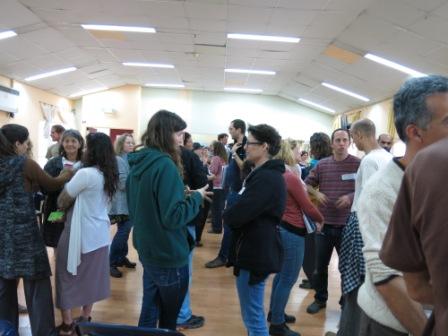 On 3rd April Naresh and I ran the first Transition: Launch training inHaifa. Around fifty people attended; a mix of activists from environmental, social and community projects. We mapped out our geographical spread, ranging from the north to south of this small country –and included someone from North Carolina,USA. We also stood in rough order of age – which spread from the youngest, around 18, to the elders, in their 60s and 70s.

Our visit included other meetings – a day with members of the Urban Kibbutz movement in Beit Shemesh to explore at the Kibbutz movement and Transition, and models for understanding change. We spent a day in Bethlehem with Palestinians working for peace, for community and ecological well being. We visited people working with communities to create gardens, wildflower meadows, composting and other schemes which linked neighbours, schools, and other organisations. I delivered an Inner Transition workshop to a masters programme at Tel Aviv University.

At the end of the trip Yoav, one of the Israeli hub representatives and the main organiser, shared the vision he had created to help him to shape and coordinate the visit.

Yoav’s Vision for the visit 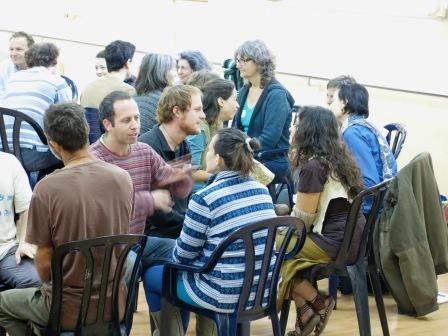 From the Israel Hub’s perspective:

Going through this list in our debrief Yoav felt he could tick all – except those which will take a year to know (to start new initiatives in Israel!). I felt how Yoav’s qualities helped create this rich harvest from such a short trip. These are some of those qualities, which I see in many leaders of successful projects, initiatives and national organisations within Transition –

Part of the impulse to create a national hub in Israel came from Deborah Heifetz, who visited Transition Network in Totnes with her partner and then went back to Israel keen to support something to manifest. Yoav started the first Transition Initiative in Tivon as part of his masters degree. Together he and Deborah started the Israeli hub, taking on tasks such as creating a website, giving talks and translating the ‘Ingredients’ from the Transition Companion.

Back to the Launch training, I was really impressed at the depth and range of knowledge and wisdom present in the room. Unusually, few people seemed interested in “peak oil” – the country seems very aware of water scarcity, but not of its total dependence on others for fossil fuels. And as Naresh has commented elsewhere, there are basic solar water heaters on 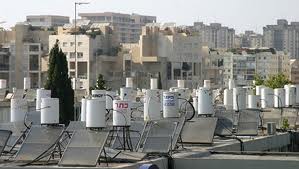 nearly every older building (it was compulsory for buildings of 4 stories or less), but very little solar PV, and no wind turbines. Is it helpful to start a conversation about energy security here? I remember what an impact it made on me to hear Rob talking about how deeply he had been affected by learning about peak oil, and the sense of that as a disturbance to the complacency in our society back in 2005 when very few were talking about our energy future.

I was also heartened at how easily people put together the need for peace with inner work and sustainability. Especially among the young people gathered I heard no difficulty in linking our inner values, our practices around conflict and peace, with our commitment to social justice and sustainability, and seeing that in the end the are all the same choices and structures expressed in a different part of the human world. 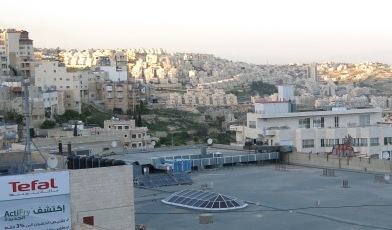 In Bethlehem in the West Bank, and in Haifa we saw again the power of inviting people to vision a world which is better, and then see a step they can take towards it within the freedom and possibilities which we have now. It felt moving to see that this process which is at the heart of Transition can happen in many different contexts and still be meaningful.

Some concluding words from Naresh..

These are a few thoughts that occurred to us as we travelled and met and talked and listened. The outsider is a privileged position, in some ways the innocent lack of knowledge and awareness of the depths of history and culture can make some dynamics more easily seen and articulated. In other ways who are we to ‘pass judgement’? I, Naresh, articulated that in my first post (http://www.transitionnetwork.org/blogs/naresh-giangrande/2014-03/transition-trainings-israel-part-1) and after having visited and learned and listened, I still feel there is more that I don’t know than do. But my not knowing is softened by a bit more depth and a deeper appreciation of the paradoxes, uncertainties, and powerful forces that make up theHoly Land. I/we offer these impressions, and hope they are useful.