A preview tour of the film “Voices of Transition” in Belgium 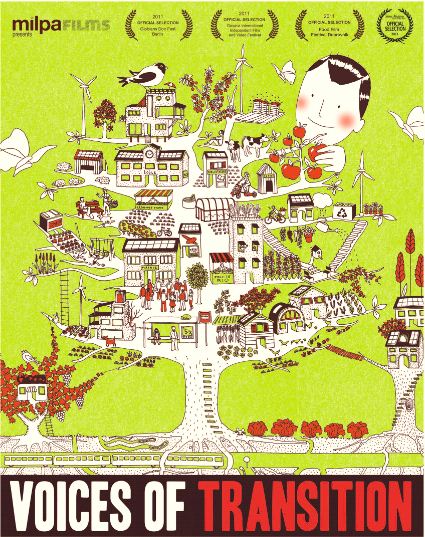 This November, the French-speaking part of Belgium hosted a tour of Nils Aguilar, who presented his film “Voices of Transition”, about food sovereignty and Transition Initiatives. With seven projections in preview, the tour as greatly contributed to develop the positive dynamics of the Transition. His organization was also an opportunity to initiate the creation of a regional network of Transition Initiatives.

The film “Voices of Transition”

Voices of transition is an independent documentary and is self-produced by Nils Aguilar. It reflects major changes in progress, such as how agricultural policies are struggling to adapt to the challenges posed by climate change, peak oil and the repeated economical crises. How to reorganize our societies to prepare them to better resist?

The film takes us to France, England and Cuba, where the current cultural transition occurs at different scales: at the level of cities or a nation. The solutions are excellent in their common sense, simplicity, low cost, as well as their ecological integrity. We discover practical alternatives and a positive vision for food while rebuilding resilience, transforming our societies so that they can move beyond the shock to come without too much damage. These practices promote local economies, strengthen neighborhood ties and encourage the free dissemination of knowledge. The future will be more sober in energy, it will nevertheless be better than the present !

The tour was organized by the young “Réseau Transition Wallonie-Bruxelles”, with the support of Friends of the Earth. It was widely advertised in the press and in many media and websites, including the regional televisions of Ath and Namur (See : http://vimeo.com/32752946). Around 1000 people attended the various projections and the interesting and stimulating debate with the friendly and committed director, Nils Aguilar. The tip of the hat goes to “Liege in transition”, which despite being a very young initiative, has sold out and had to turn people away … not less than 420 people attended with a lot of excitement !

The film was very well received and the discussions have been interesting and dynamic. They took place in the specific conviviality of the Transition. New working groups are likely to be created soon. We have discussed matters such as the Cuban case, which was a “Peak Oil before the time” after the end of the Soviet Union. We also spoke of relocating food production, urban agriculture, local currencies, awareness in schools, the development of a positive vision…

In three other cities, local associations were raising awareness about the Transition. In Mons, Namur and Péruwelz, the tour will be followed by citizens’ meetings around the Transition, which are likely to lead to new initiatives …

Viral spreading of the Transition in Belgium

The Transition is steadily increasing in Belgium where only five initiatives were known in the French part in 2010. Since then, due to the release of the “Transition Handbook” in French in October 2010, the special feature of the Belgian magazine Imagine “Journey to the heart of the Transition” in January 2011, the weekend “Transition Towns” organized by Friends of the Earth, the conference of Rob Hopkins in Brussels in September 2011 and the organization of the tour of the film by Nils Aguilar in November 2011 … there are now at least 17 initiatives in French-speaking Belgium, six of which are listed on the Transition Network (registration is complicated for those who do not speak English). In the Flemish part of the country, at least 16 initiatives are also underway. So that gives 33 initiatives in Belgium (12 of them are listed on the network, two of those are official: Tervuren for a long time and recently Ath).

The movement of the Transition is well under way in Belgium. In order to support this process, in 2012 the young regional network “Réseau Transition Wallonie-Bruxelles” plans to organize official training in French and to translate and adapt concrete tools such as for example the “Transition Streets”…

The film is in post-production. If you want to help the director, financially or otherwise, go to www.milpafilms.org.

So, Belgium appears to be embracing the Transition approach. Well, they’re at the heart of Europe and certainly not immune to the interesting times we’re having over here. In that sense, these transition groups have started not a moment too soon.