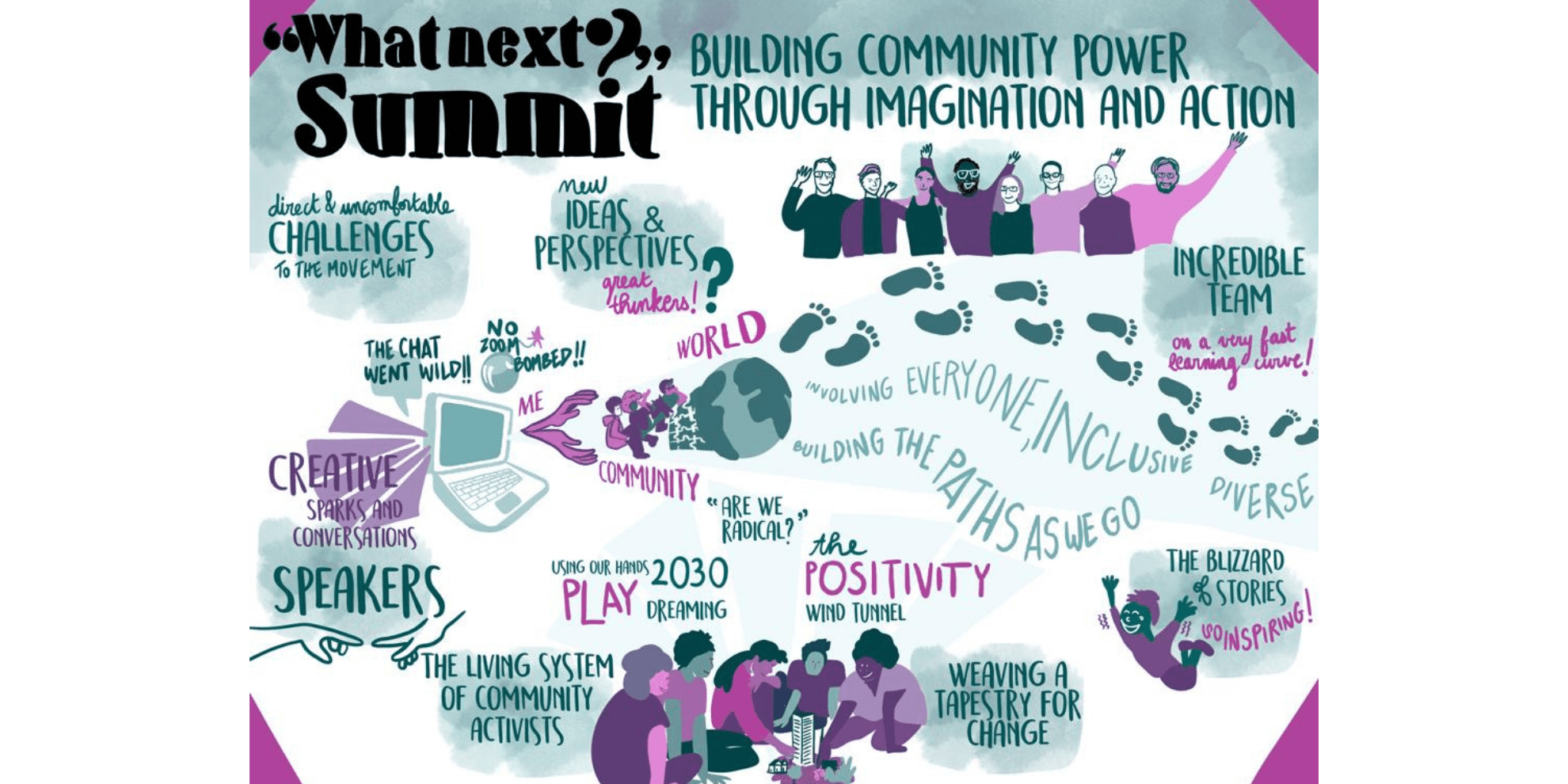 Rob Hopkins tells the story of how it unfolded, with videos of the sessions and some reflections.

Between March 3rd and 20th 2021, the Transition: Bounce Forward team hosted the ‘What Next Summit’, billed as “building community power through imagination and action”. While its focus was on Britain (due to the funding that enabled it) it drew an international audience and shared stories from around the world. It was ambitious and quite a ride.


The Summit started on the evening of March 3rd, with our first week, the ‘What Is’ week. The idea was that it would explore where we are at right now, what’s the state of play of the movements and the issues that are defining our times.

We kicked off with a very ambitious event called ‘The Blizzard of Stories’. It had so much potential to go horribly wrong, but it turned out amazingly. In just over an hour, we heard 12 stories of people-led change from around the world. A moving, and inspiring start to the Summit. It also featured our first poem from the Summit’s Poet Laureate, Fedzilla, and was the first time people got to meet Fanny Didou of Sketching the Move, who created beautiful visual notes of each key session from that point forward. The intention was for the Blizzard to feel like being in a ‘positivity windtunnel’, and it certainly did…


The next night’s webinar was called ‘Making Sense of the Climate Emergency’, and featured Michael Mann, Lola Fayokun, Anna Bullen and Sam Knights. It was a fascinating immersion into where we find ourselves in the climate and ecological emergency, and what our next steps might look like.


On the following day, the event broadened out into a number of workshops as part of our Invited Programme.

Workshops (I will include links rather than embedding videos just in the interests of this blog not being a mile long) included Inner Transition, ‘Technology for Change’, ‘Together, our ideas change the world’, ‘Reaching beyond the usual suspects: community action for everyone’, ‘Building the livelihoods of Tomorrow, now’, a takeover session by the Alternative UK called ‘Where does the power lie?’, and also one by the Upstream podcast, called ‘What is … feminism for the 99%’. All were well attended and a real buzz was starting to build around the content and the themes being covered.

That evening we held our last big webinar in the ‘What Is’ week, called ‘What is breaking through as the current food system is breaking down?’ It featured Prof. Tim Lang, Dierdre ‘Dee’ Woods, Julie Brown and Pam Warhurst. The chat forum was so alive and busy that afterwards when we pasted it into Word it ran over 24 pages!


Saturday then picked up where Friday had left off, with a full programme of workshops. There was a Community Organising 101 session, ‘COVID Mutual Aid: has it ever been mutual?’, the very powerful ‘Does environmental sustainability have a problem with social justice? (re)Locating Justice in Environmentalism’ with Marvina Newton of BLM Leeds and our very own Nick Anim, all of which rounded up with a very rich and insightful reflection session, hearing peoples’ experiences of the Summit up to that point.


The next week, our ‘What If’ week, was designed to introduce the aspect of the imagination, of ‘What If’, of how our activism might be deepened and enriched by making more space for the imagination. We couldn’t have chosen a better event to open it with, which turned out to be many people’s highlight of the Summit.

The session on the New Constellation in Barrow moved many to tears, and took us on an incredible heart-filled journey into what community consultation can look like if dreaming and imagination are at its heart…


Wednesday night’s event was called ‘Cultivating Everyday Imagination’, and it featured Tom Doust, Suhaiymah Manzoor-Khan and Phoebe Tickell looking at how, as individuals, we might boost and expand our own capacity for imagination.


The following evening we broadened that out, to look at how we might do the same for communities. Joined by Afsheen Kabir Rashid, Daniel Raven Ellison and Kamran Rashid, it was a great conversation, again accompanied by a very lively chat box!


The final one of these What If evening webinars was on Friday, where we were joined by Kate Raworth, Mia Birdsong and Carne Ross, for a session called ‘A Society Where Imagination Flourishes’. 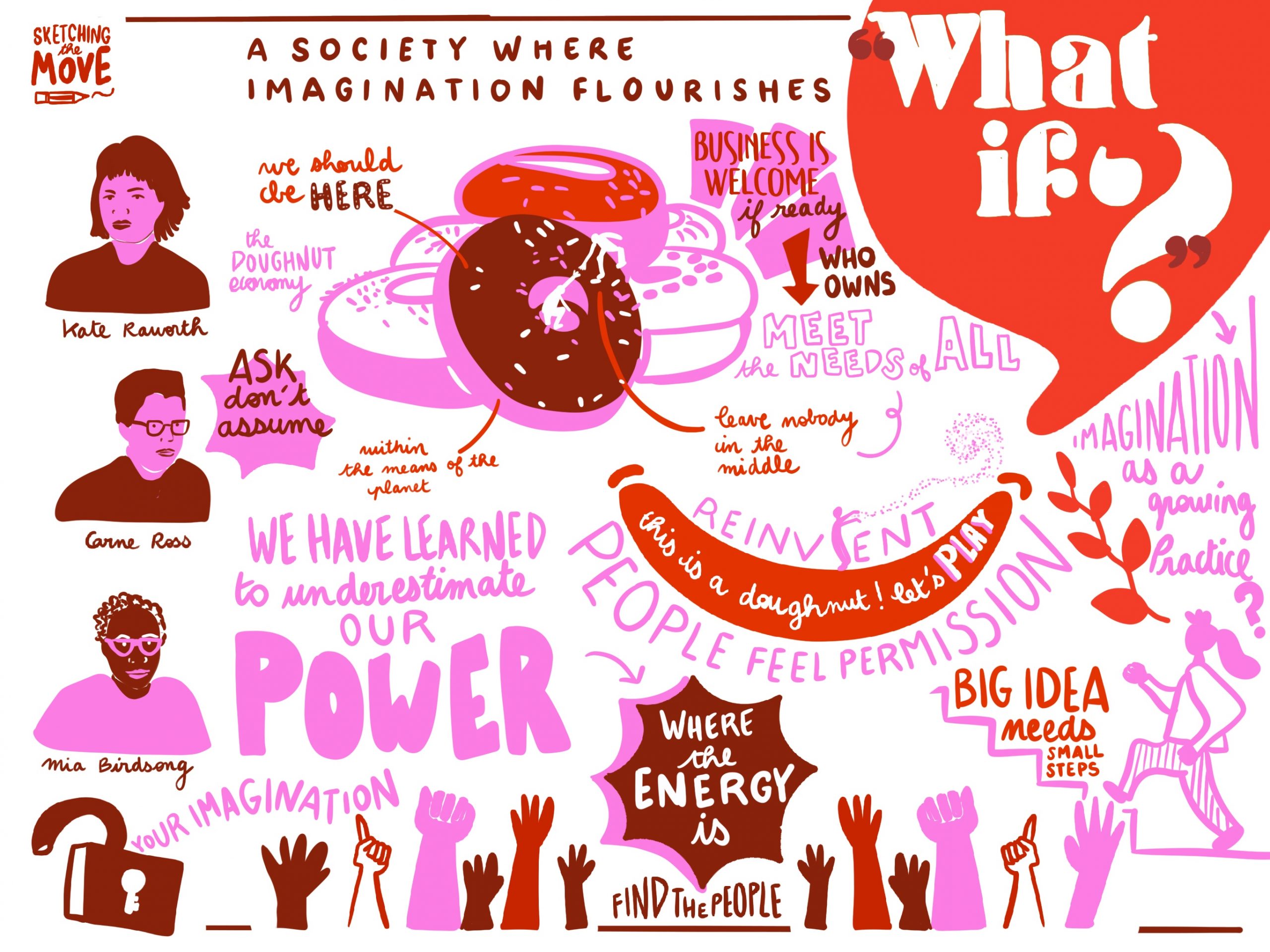 We were also joined by two Keynote Listeners, a concept that we’d return to in the conference, where Cassie Robinson and Chidi Oti Obihara both offered their reflections on the discussion at the end. This session was a real highlight for many Summit participants. It also featured Fedzilla’s second poem.


And here’s that poem…


Another highlight was to come the next day. Lucy Neal and Ruth Ben Tovim had picked up our challenge to translate their incredible ‘Pop Up 2030’ activity into an online setting. With the support of the team’s Dan Hurring, an incredible array of different digital tools were corralled so as to enable the activity to go ahead. It turned out to be an incredible journey into the future we could still create, just. 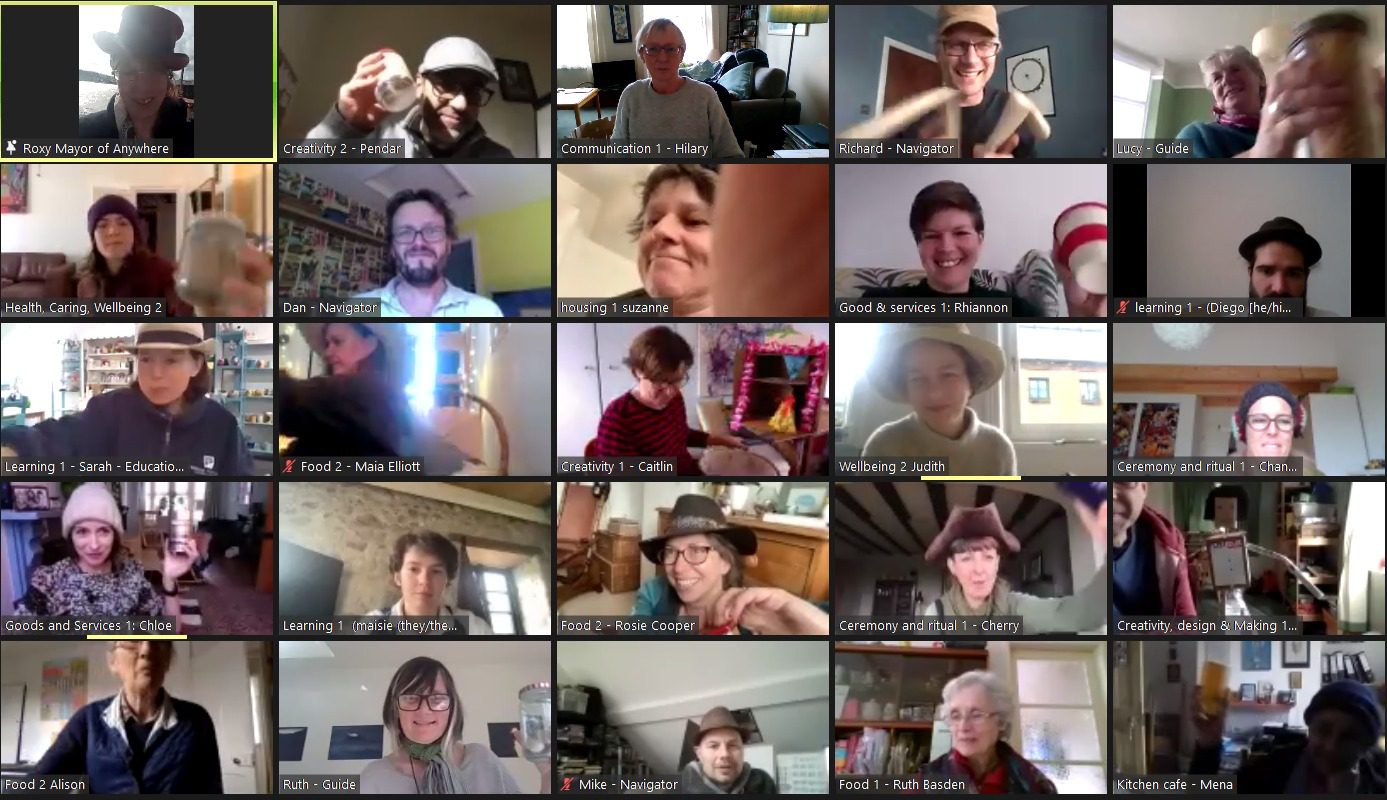 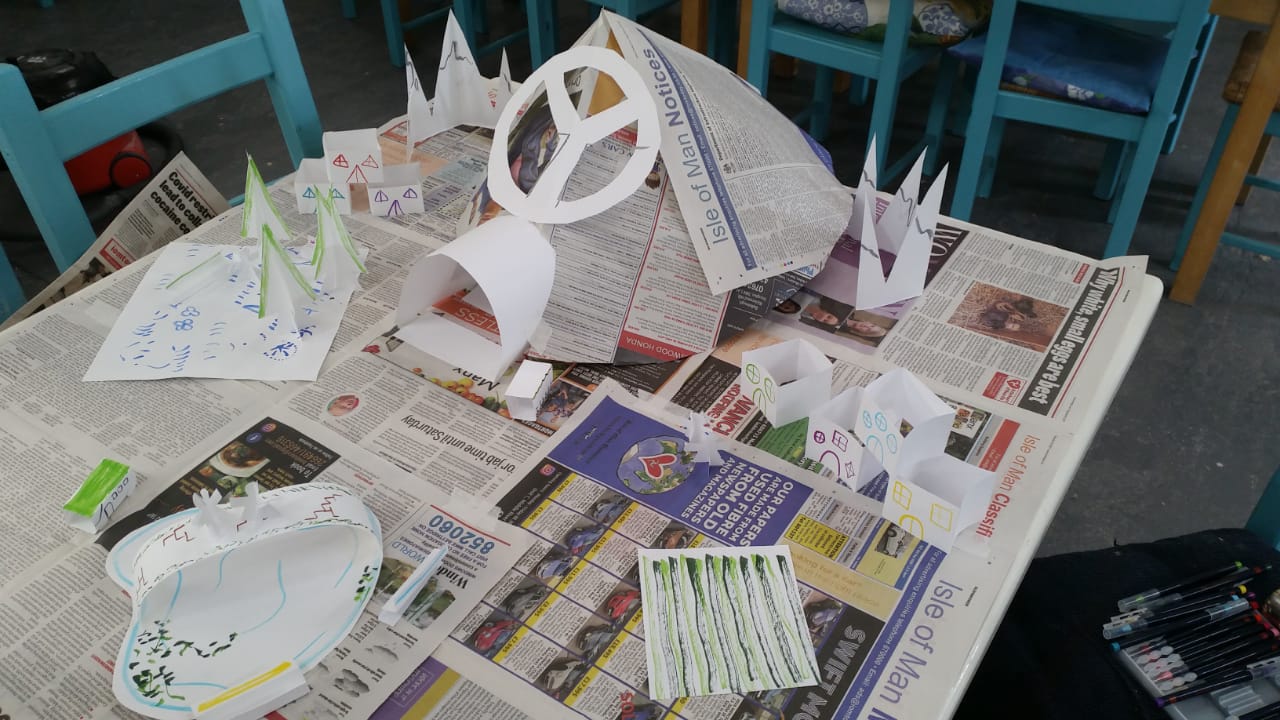 One participant’s kitchen table during the Pop Up 2030 day… 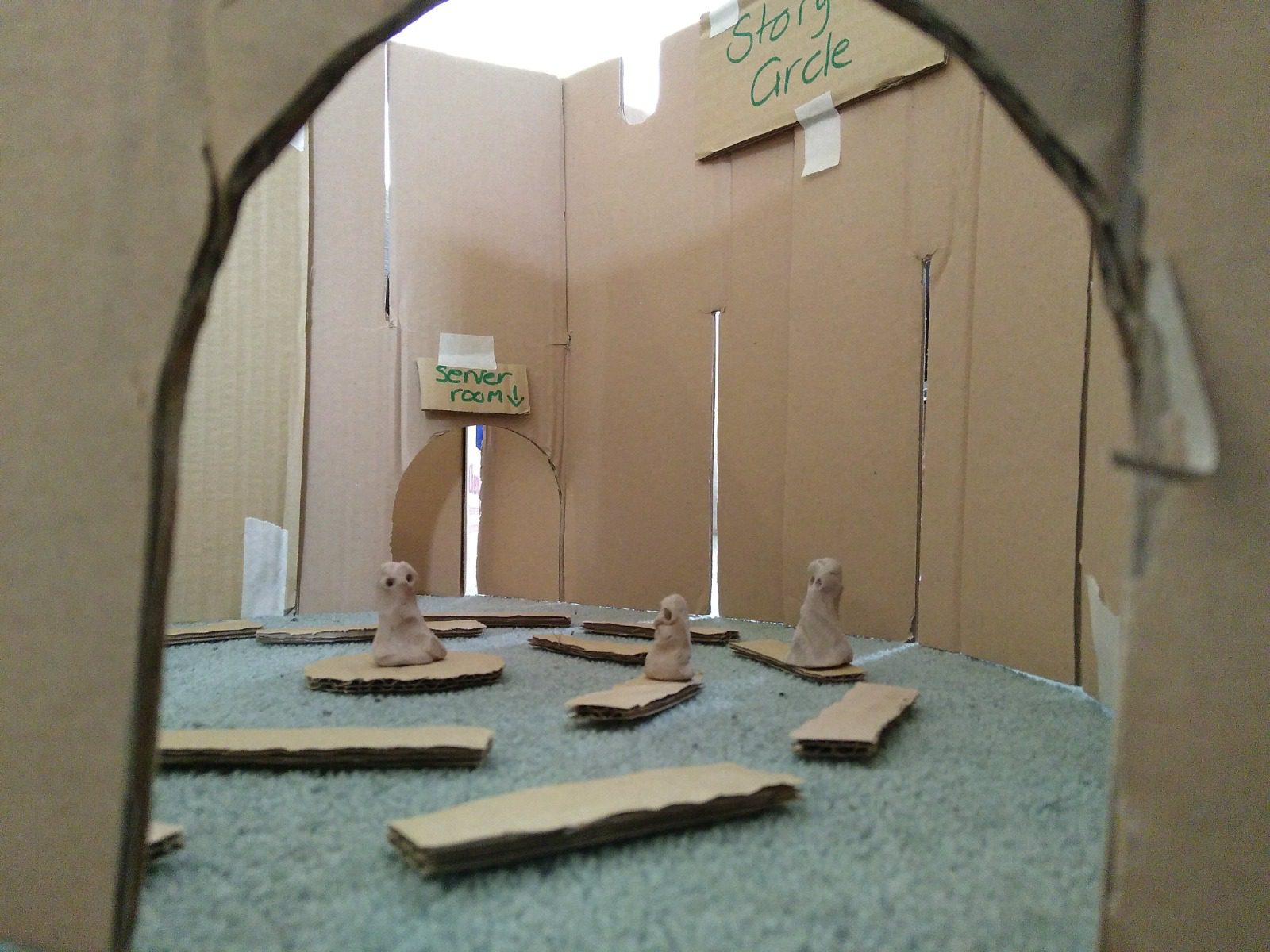 A ‘Story Circle Centre’, home to the ‘Open Story Network’, as shared on WhatsApp during the day… 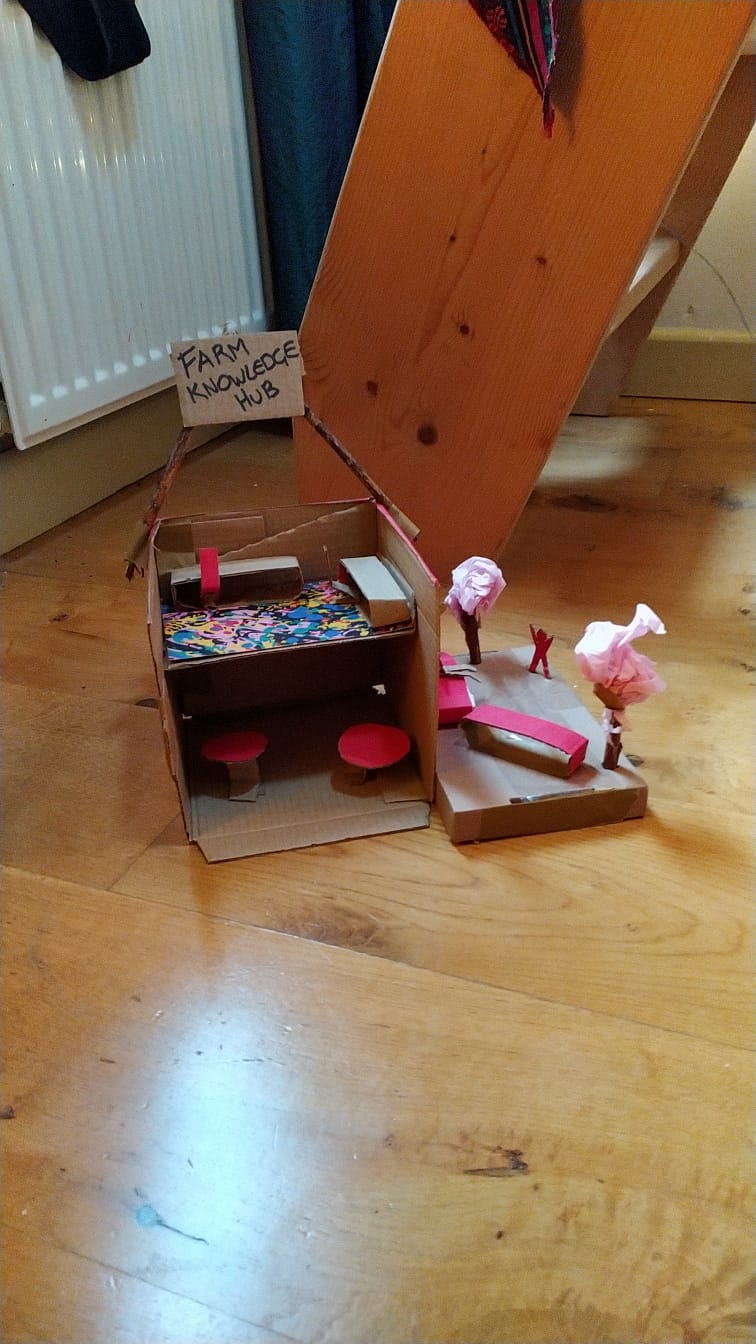 People around the world dreamed and planned, and built those futures with cardboard and paper and pens, sharing them via WhatsApp, while Fanny created a beautiful drawing of the town they were creating. A deeply touching day that will stay with people for a long time. 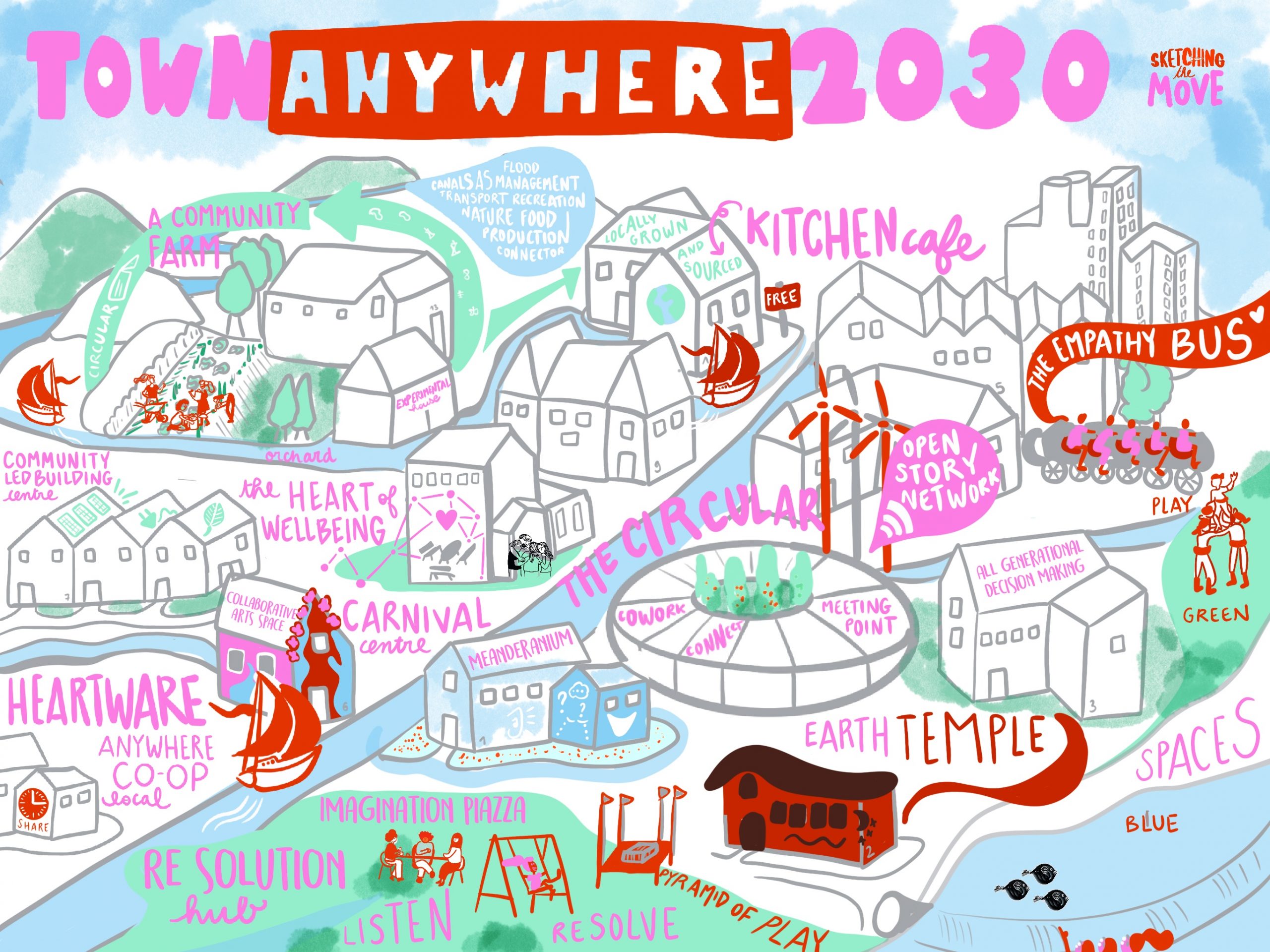 The final week was ‘What Next’ week, intending to pull together all the threads of the Summit so far. It started with 2 days of self-organising Open Space. People were invited to organise their own sessions and to post them for people to attend on our Nudj Platform. The subjects were wide and varied, and it was beautiful to see that by now, people were comfortable enough with the Nudj Losing Control platform to both organise Open Space session, and also to hold discussions and conversations about the sessions that they had been to.

On the last Friday evening, ‘Connecting the Threads’ was a reflective session that drew together the key threads up to that point. Saturday began with different workshops and skillshares. They included ‘Collaborative Organising within our Communities’, ‘Building community power through innovative partnerships’, ‘Effective communications for social change’, and ‘how to work with your local council effectively’.

The whole event ended with ‘What Next: organising for change’, a beautiful opportunity for participants to meet each other and to share their experience of the Summit. And a big celebration. And a final poem from Fedzilla. And a review of all of Fanny’s drawings up to that point. And lots of beautiful feedback from participants.

The What Next Summit was a huge stretch for the Transition: Bounce Forward team, but it exceeded our expectations. A particular delight was the really focused dedication to diversifying the voices heard at the Summit, which brought so much richness, and challenge, to the event. Also, the degree to which the self organisation and connection, facilitated by the platform we were using, succeeded. The sense of people taking ownership of the event was thrilling.

Some thanks. Firstly to the team: Rich, Dan, Rhiannon, Jenny, Roxy, Mike, Nick, Mikee. To everyone in CtrlShift and the other organisations who partnered with us. To The National Lottery Community Fund for making it possible. To Losing Control for hosting us on the Nudj Platform. And to everyone who took part, as a speaker, a Keynote Listener, a workshop presenter, or a participant.

Transition: Bounce Forward – What Next?

Three weeks of workshops, events and networking to build com...