“What is the change we want to see in the world, and how will that change happen?” These were the two rather intimidating questions we posed ourselves at the recent Transition Network Awaydays – our twice-yearly retreat for staff and board members. This post shares one piece of the our wide ranging exploration of theories of change, which looks at what it is about human beings that enables us to create healthy, sustainable, pleasurable ways of living – and why we often don’t.

We started with a very big map of change – and the understanding that the change Transition seeks is towards more “health” in every part of our system. We used the word health not just for our physical state of wellness, but applied to all the different parts of the huge system of which we’re a part. So it includes our mental or emotional as well as physical health, but also applies to larger scales – community or societal health, ecological health, planetary health, and so on.

We went on to look at a number of “Theories of Change”, including the one below – which looks at how we can get stuck in an emergency state, and continually recreate stressful, unequal systems at all levels of scale.

Exploring Doing and Being 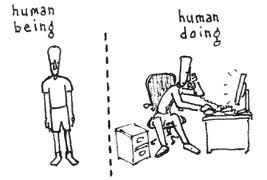 What follows is a really simplified version of a model which focuses on two aspects of human existence, Doing and Being. The model has lots of layers and facets. My intention isn’t to present something definitive or watertight, but to give an overview of something which I – and many I’ve shared it with – have found helpful.

The first proposition of this model is that health for humans is a flow between two contrasting (not opposite) qualities of life. Some might call them archetypal qualities. Here are some words that describe them: 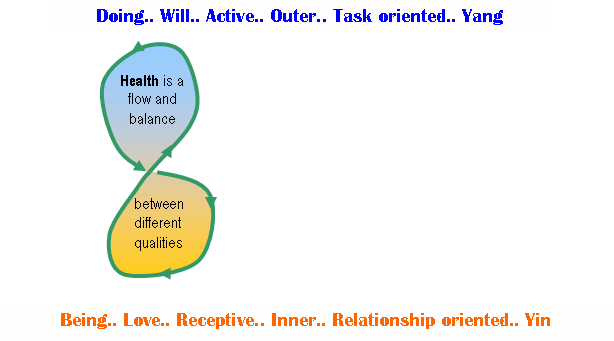 You can see this natural rhythm resulting from our evolution in a world which has similar cycles – night and day, winter and summer. In fact we have nervous systems which regulate our bodies for both parts of the cycle – parasympathetic for the relaxing, digesting, inward part; the sympathetic nervous system for the active outer phase.

Resilience = Ability to bounce back to health

When we are resilient we can be stressed in this system and bounce back to health. A lot of neuroscience research recently has shown that there are a number of ways we can respond to stress. The sympathetic nervous system often goes into fight or flight response – the most well known. Peter Levine’s work with trauma shows animals and also humans can freeze when threatened. Our evolved response is to take action, and then to release the tension from the body – either through the running away or fighting, or by shaking out after the freeze response. We can then come back to the healthy flow between relaxation and action. 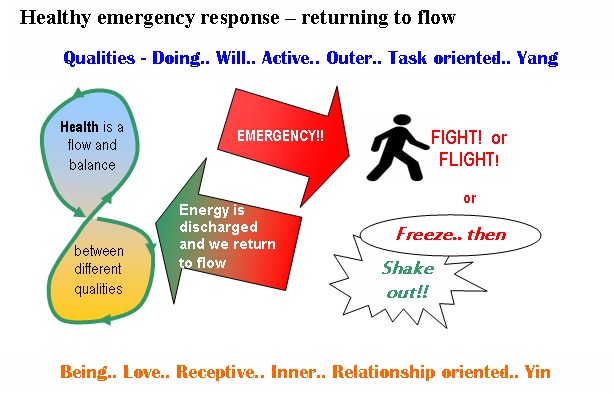 Out of balance = Unhealthy

However there are circumstances where we don’t come back naturally to that flow. One is where our stress response is overwhelmed by a major event – such as a physical attack, or being shamed in front of others (we respond to emotional attack as if it were physical – we don’t have a distinction in these parts of the brain). The other is if we endure some kind of stress over long periods, where there isn’t time or space to recover and bounce back. It’s been shown that this kind of long term activation of the stress system can damage the immune system, leading to illness. So our stress levels have a direct impact on our physical health. 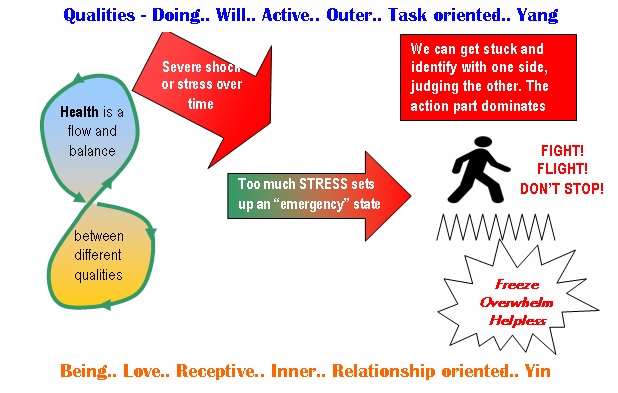 When our capacity for coping with stress is overloaded over time we can get stuck in the physical, mental and emotional survival state. For some this is a driven need to keep going, for others this may be a place of collapse. It’s helpful to see that these two positions are the extremity or the distortion of the healthy qualities of activity and stillness, and the healthy emergency responses of fight / flight and freeze.

This can apply to individuals, but also to groups and even to societies. I’ve heard stories of people in post-war situations where the drive to “keep going” was intense, partly driven by the need to avoid feeling the overwhelming pain and terror of the war. Organisations can also create a slowly deteriorating culture of stress by valuing people who overwork, promoting them, and creating a culture where individuals who support balance are seen as weak or uncommitted.

There are a number of features of a system – whether an individual or a group – that has reached this state of distorted polarity:

Bringing a polarised system back to flow and health

A system (a person, a group, organisation or society) which is stuck in the polarised positions can be helped in a number of ways:

This is emotionally charged territory – the desire for power, and to dominate, may originally be a response to dealing with overwhelming stress or trauma, but often brutal systems of domination and exploitation result. If or when these are overthrown there is a moment where the roles can simply switch to another group dominating; or there is an opportunity for peace. 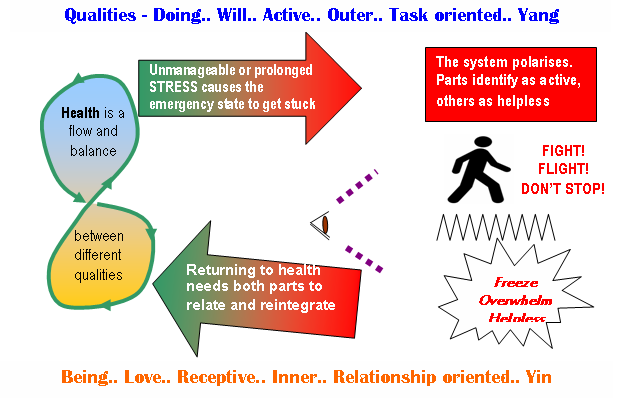 For any group of human beings, I would say that its ability to stay identified with the place of balance and flow, and the ability to step out of and recognise distorted belief systems, is the definition of health. Groups with this kind of health will have ways of recognising when the distortions are starting to arise, and bring the system back to balance. This is shown on the diagram with the eye – able to see both parts of the system, and bring them back into relationship with each other, back to balance and flow.

There are many social technologies which explicitly recognise our capacity to fall into traps of distorted beliefs and stay there, which have developed practices to correct or heal people who get trapped. A while ago I wrote about the Haudenonee Confederacy and their principles of peacemaking, which include operating from “Upright mind” rather than “Deteriorating mind”. In their councils they have someone with a role to stop the meeting if its state of mind starts to deteriorate. Quakers use gathered silence as a way to quiet the mind and come back to a state of open receptivity. Buddhism has a very precise explanation of the “poisons” of the mind – aversion, greed and illusion – and specific practices to come back to reality and health.

For me this is the first model I’ve found which really explains how “power over” systems arise – not because of some power hungry gene we have, or because hurting other people gives us a kick, but because we have a stress system that can gradually take us out of balance, until we don’t even know that our state is dysfunctional.

When I look at our society I see this system operating in many of our systems. I see it in our belief that we have to keep growing  our economic activity – a compulsion to “do” more and more. I see it in our need for busyness, distraction, activity, to be constantly entertained. I see it in the difficulty we find when we do stop – how uncomfortable it feels, as all the feelings we’ve been keeping at bay rush in. Bi-polar disorder is a precise description of someone swinging between the two distortions of manic activity and depression, unable to reach balance.

Unhealth in the health service

I read a great article in last Saturday’s Guardian about doctors in the health service suffering from health problems – depression, anxiety, mental health problems including bi-polar disorder. The culture of the health service, like many of our workplaces, is that limits to work, vulnerability, illness, and human fallibility are unacceptable.  This quote is from Clare Gerada of the Royal College of General Practitioners:

“An atmosphere of fear and uncertainty pervades the NHS, adding to doctors’ anxiety about being perceived as weak or unwell. Doctors do not find it easy to get the right help, even if it is available to them. Their problems are, Gerada says, deep-rooted, psychological and social, part of a stigma in the NHS attached to weakness, addiction or mental illness.”

It’s as if the most extreme version of our medical model – that we are robots that need fixing when we break down – has been applied to doctors, who are expected to keep going without support for the extreme emotional challenge of their work, and often without enough time for proper rest.

Polarity in Movements for Positive Change

My enquiry into Doing and Being as a cause of unhealthy culture resulted in part from my experience and observations in the Transition movement, seeing how intense the drive to create change can be, and how easily that can tip us into a relentless urgent pressure to do. The scale of the change needed, the enormity of the consequences if we don’t succeed, and the emotional toll of working for something we care so deeply about all contribute to make Transition a compelling movement to keep on giving our time and energy to. The two main symptoms when we are doing too much are conflict – there’s not enough priority or time given to taking care of relationships – and burnout – when we’re just exhausted.

In Transition Network we took a look at our balance a few years ago, and as a result started to give more priority to Being. Here are some things we have in place that support Balance:

After reading this you might be interested to enquire into your own culture – in your group, or yourself. Here are some questions that might help (I’ve written them as if for a group – but you could just use them for your own life):

Since our Awaydays I’ve talked to a number of people about the Doing / Being way of looking at life, and been amazed at how many people are talking about it in some form. These same archetypal principles of human existence were explored on my psychosynthesis therapy training as Love and Will – leading to Being and Doing.. As my teacher used to say, Frank Sinatra got it right about what life’s really about, singing.. Do be do be doo… 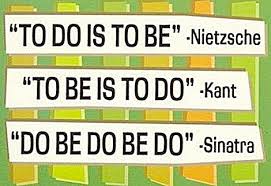