Welcome to our month on Social Change and the Arts.  It’s a theme that has been long overdue for exploration.  It could be subtitled “Why the Arts need Transition, and why Transition needs the Arts”.  The trigger for our finally sitting down to give it the attention it deserves is the impending publication of Lucy Neal’s brilliant and remarkable new book ‘Playing for Time: making art as if the world mattered’ (published early next month).  Over the next 2 months we will be exploring the relationship between Transition (and other approaches to social change) and the arts, speaking to some of the contributors to the book and hearing about some inspirational projects and artists. 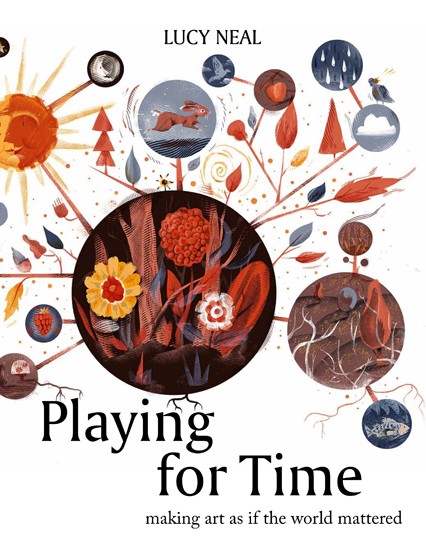 The book quotes Suzi Gablik, in conversation with James Hillman, as saying “the notion of art being in service to anything is an anathema. Service has been totally deleted from our viewpoint”.

That sense of service runs deep through Transition, and Lucy’s book puts it back at the heart of arts practice.  It promises to be a fascinating eight weeks.  It starts with an in-depth interview with Lucy herself about the book and about the overlap between Transition and the arts world.

In this post I want to reflect on one of my favourite places where Transition and the arts have overlapped.  But first I wanted to share a section from the piece I wrote for the book, which reflects my sense of why the arts matter in Transition:

“When we started Transition, I imagined it as an environmental process. Now I see it as a cultural process. What does the culture of the place you live need to do in order to be best prepared for change? Transition can start to change that culture, introducing an invitation to work with other people who ordinarily you wouldn’t meet, and to create something extraordinary with them.

It reweaves connections, it brings people together with a creative impulse. Some might say, ‘Well that’s all very well, but in the context of the challenges set out earlier, it’s a drop in the ocean’. They may be right. But my sense is that Transition embodies the possibility of something that few other things can achieve. It is about what is currently politically impossible becoming politically inevitable. Transition can start to change the tone, change the background buzz, change the sense of what’s possible.

It has a tremendous ‘power to convene’, to get all manner of people in a room together, dreaming, planning and doing. It does so in ways that aren’t what people expect. Transition ‘shops’ on High Streets that invite people in to share their hopes and fears for the place, Open Space events where the agenda is created by those attending, fuelled with tea and cake, pieces of community theatre that invite people to be part of not just imagining the future, but spending time in it, walking around in it and discussing it with others who have also made that journey.

Perhaps one of the key parts of this has been how Transition has, from the start, consciously seen the arts as being central to its success. The arts can powerfully make the kind of future we want to see become an actual reality around us. It can invite us to step across into the future. It can open us to new possibilities and it can celebrate and document what we’re doing in playful and creative ways. Ultimately, it can spark change, and change is what we need right now. What Transition does is to give that a narrative, a context. What is most heartening, around the world, is to see how many people have already started to step up, and how much fun they are having in doing so. You will hear many such stories among these pages, I hope they inspire you to become part of them”.

While there are many things I could choose from, one object stands out for me when I think of the power and potential of art being in service to Transition, and of Transition being in service to art, as well as harnessing the power of storytelling, good design, place and culture.  It’s a local currency note from London.  The Brixton Pound £10 note, the one featuring David Bowie.  Notice how you had already heard of it and, most likely, could already visualise it.  In the event that you didn’t, here it is, among its fellow notes. 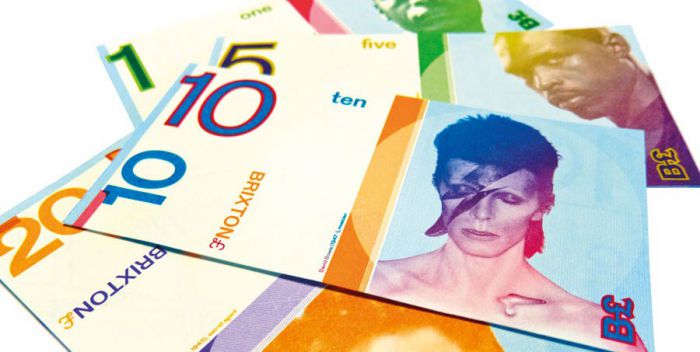 It’s bright, it’s simple, it’s colourful.  I have taken it to many places.  What has often amazed me is how its reputation has gone ahead of it so that, on at least 4 occasions, just my holding it up during a talk has generated a round of applause.  When I went to Paris recently and visited a project run by Le Pre Saint Gervais en Transition, we were visited by the local Mayor Gérard Cosme.

Did he want to have his photo taken with the group of people there?  With me?  Not really.  The key thing he wanted was a photo of himself with the Brixton Pound £10 note, “the one with David Bowie on” (see photo below).  Sometimes after big talks, a group of young people will come up, wanting to take a ‘selfie’, and usually ask for the David Bowie note to be in there too. 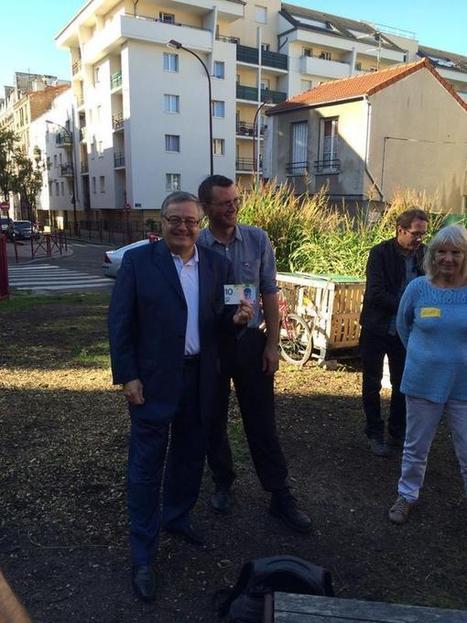 It made an appearance in the recent excellent ‘Scala Mercalli’ programme on Italian TV on Friday evening (watched by over 1.1 million viewers).  It starts conversations.  It embodies the sense that a Transition future could be more fun, more delightful, than the alternative futures currently on offer.  It embodies possibility.  It is delightful.  Why would anyone want to settle for the dull money currently on offer, when we could have bright funky money with David Bowie on?  No, seriously … why would you? And if you won’t settle for that, why settle for anything else? It opens the possibility of actually refusing to accept the planet-trashing, attention span wrecking, community atomising, wealth concentrating crap that makes up so much of what we accept in modern society. 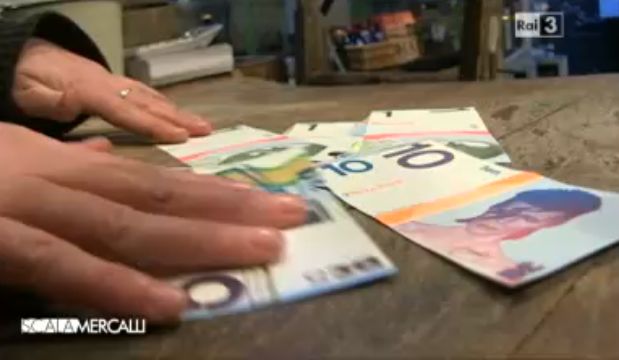 In his brilliant TED talk from 2007, James Howard Kunstler talks about ‘Places Not Worth Caring About’, and as modern architecture builds more and more of them we end up with entire places no-one cares about.  And that has very harmful impacts in terms of peoples’ wanting to make the world around them a better place.  If you’ve never seen it, and fancy a hilarious and enlightening 20 minutes I couldn’t recommend Kunstler’s talk highly enough:

My point is that we need more things in our life that we care about.  Personally speaking, I care more about a Totnes £21 note than I care about a £20 note.  The things Transition does, whether urban gardening, new food markets, Transition Streets groups, are all about creating things that people care about.  The remarkable ‘Transition Town Anywhere‘ activity Lucy and others facilitated at the Transition Network conference in 2009, where 350 people built a living, working High Street economy from string and cardboard left me caring far more deeply about my own High Street than I had before.  And art and design have a vital role to play in that.

“Building alternatives is always an act of hope – the embodied refusal of the present”.

This simple bank note embodies that.  Every revolution needs its icons, its tokens, which embody much more than appears at first glance.  But it’s about more than art and design.  It’s about what those things can act as a gateway to.  I always loved Jean DuBuffet’s quote:

“Art does not lie down on the bed that is made for it; it runs away as soon as one says its name; it loves to go incognito. Its best moments are when it forgets what it is called”.

For me, the moments when Transition most touches and inspires me are the moments when it “forgets what it is called”, when it comes up with unexpected and delightful approaches.  A £10 note with David Bowie on is a perfect example of that. So is “a shop with nothing for sale but lots on offer”.  So is a project to plant fruit trees that is also an art project with oral histories, tours, poetry, maps and storytelling. So are the hundreds of thrilling stories that make up Lucy’s book.  Over the next two months we’ll hear other examples too.  May there be many more of them, and may this month blow your mind in terms of what you think it is possible for Transition groups to do.