The following story is the third installment in a new series from Transition US,  called “10 Stories of Transition in the US.” Throughout 2018, to celebrate the 10th anniversary of the Transition Movement in the United States, they have been exploring 10 diverse and resilient Transition projects from all over the country, in the hope that they will inspire us all to take similar actions in our local communities.  The project was in part inspired by the 21 Stories of Transition, and forms a wonderful addition to our story collections from across the Transition movement. 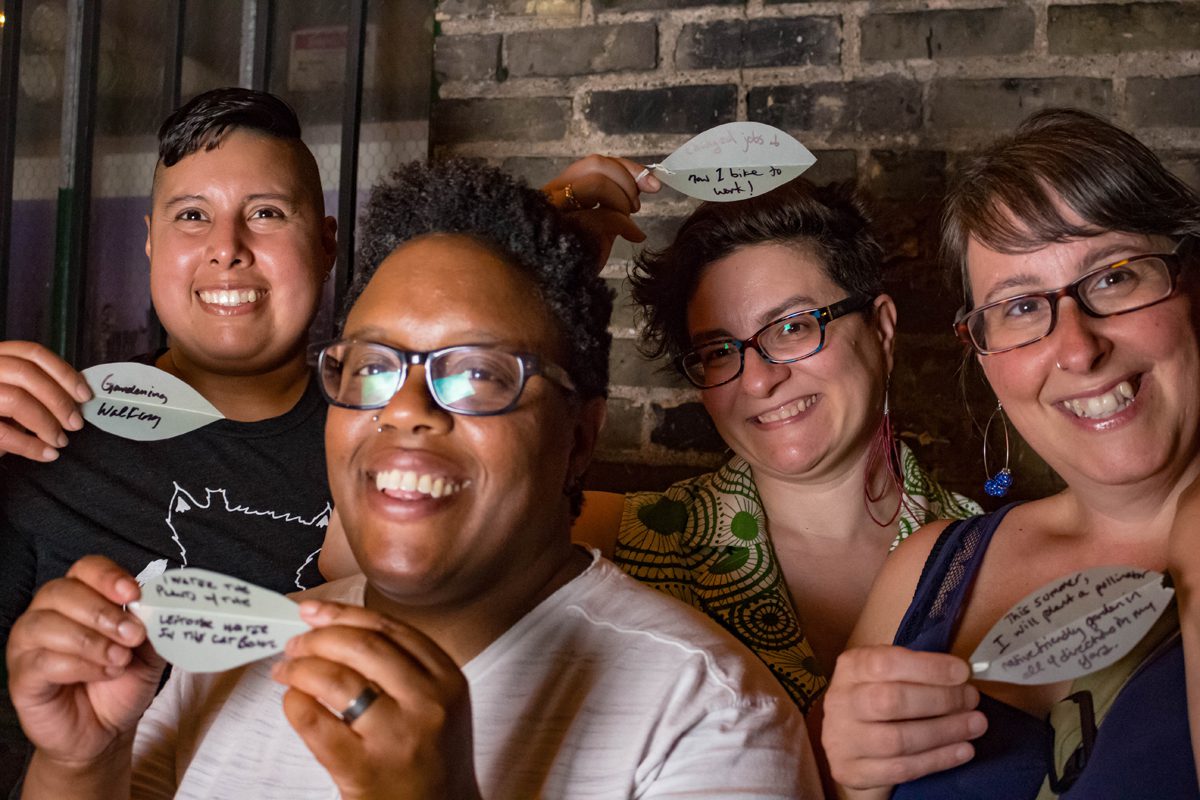 Two of the key goals for any Transition Initiative just starting out are to raise awareness about Transition and build a robust base of supporters. When members of Transition groups in the Twin Cities of Minnesota heard about the Northern Spark festival, they knew it was a golden opportunity. With a little creativity, their Grove of Life project offered thousands of area residents the chance to learn about the variety of actions others are already taking that they could apply to their daily lives.

Started in 2011, Northern Spark is an all-night festival that connects Minneapolis and St. Paul with seven different artist zones. For the last two years, the goal for the event has been to raise awareness about climate change and offer a call to action. In 2017, more than 70 art projects were installed along the “Green Line,” one of the most interactive being the Grove of Life developed by TransitionNOW!

“Seven of us from Twin Cities Transition groups felt we had a positive, hopeful message to share with a large and diverse group of people,” says Regula Russelle, one of the organizers of the project and a member of Transition Town All St. Anthony Park. “Having a group committed to develop ideas and share the work made us confident that we would be up to the task and that it would be fun. We made a proposal and received a grant. We then set to work.”

The group identified a local plant nursery that donated several small trees that were not suitable for retail and were destined to soon become mulch. Setting them up in large pots with bags of sand and gravel gave them a foundation for their installation, but the fun had just begun. 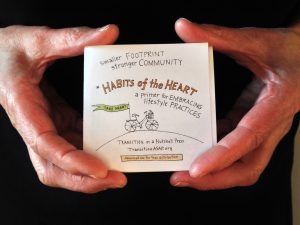 Drawing from members of the eight different Transition groups that have formed to date in the Twin Cities, the group organized two different work parties in order to prepare for the festival. Children and adults attended, cutting out 4,000 paper leaves, printing and folding informational booklets to distribute, and customizing screen-printed t-shirts.

“We screen-printed 100 t-shirts and printed 1,000 keepsakes with the letterpress by hand,” says Russelle. “Neither activity was necessary for the success of our project, but 100 glow-in-the-dark t-shirts with messages about simple initiatives people could take certainly helped to raise awareness.”

The night of the event, the group set up the Grove of Life in an alley behind a deli in downtown St. Paul. They set up the bare trees with strands of white lights and created a makeshift path that meandered between them, so that the Grove of Life was ready for visitors when the festival officially started at 8:59pm. As festival goers approached the installation, they were asked to write down “Earth care” practices and promises to combat climate change on one of the paper leaves with the felt-tip pens that were provided.

A photographer was on-hand to take pictures of people with their leaves, and visitors to the Grove of Life were invited to attach their leaves to one of the trees with repurposed twist ties that had been provided by several neighbors. Musicians provided melodies until two in the morning, when a soundtrack of birdsong filled the space until the sun rose at 5:29am and the forest was taken down.

“It felt meaningful and ceremonial,” says Russelle. “Embracing Earth care practices and promises are hopeful acts that shape culture. Doing this together with others tells us that many actions add up to something lovely and large. We can tell each other what is being done, as well as what can be done. We can work together. We are not alone.” 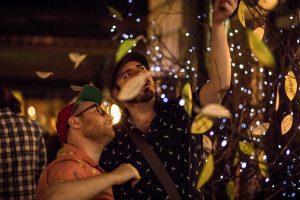 Although the Northern Spark festival lasted only a night, the Grove of Life project has already reverberated far beyond this event. Leslie MacKenzie, a member of Transition Longfellow and organizer of Transition Twin Cities, has used a single tree when promoting Transition at other events. Pre-populating the tree with a range of practices, it gives people a good idea about the kinds of actions that are possible and creates an opportunity for conversation.

MacKenzie says that the messages on the tree demonstrate that “many people do take climate change seriously and are already taking action to reduce their carbon footprint. You are not alone if you are taking action. This is a normal thing to do.”

Russelle also exhibited 32 photos of people and their leaves in the Gage Family Art Gallery at Augsburg University. In front of the tapestry of photographs, she placed a large bowl filled with blank paper leaves on a pedestal with a sign reading: “What Earth care practices or promises would you write on a leaf?” At the gallery opening, once one person wrote down their intention, others followed suit, with the photos, leaves, and question being just enough to engage visitors and make them think.

Russelle and MacKenzie both say that this project is easy to replicate. It provides participants with the opportunity to be visible role models, expand people’s sense of what is possible, and work together on a really fun and creative project.

1. Grove of Life participants show off their intentions for creating a better world. Photo by Raven Miller.

2. One of hundreds of tiny books handed out in conjunction with the Grove of Life at the Gage Family Art Gallery and elsewhere. Copies can be downloaded for free at TransitionASAP.org. Photo by Michael Russelle.

3. Experiencing the magic of Transition. Photo by Dan Norman.