The community of Totnes in Devon just reached a historic agreement which represents the next step for Transition, a huge leap forward in ambition, scale and possibility. In 2007, the Dairy Crest site in Totnes closed, and 163 jobs were lost.  This came on top of a number of other major employers also closing, and the then Totnes Mayor Pruw Boswell was quoted as saying “how much more can this town take?”  At that time, the idea of the community taking over and running that site was born, initially as the ‘Sustainable Business Park Group’.

For 5 years, the group, which was quickly renamed Atmos Totnes, after Isambard Kingdom Brunel’s experimental ‘atmospheric railway’ for which a pumping station was built but never commissioned, lobbied and campaigned.  Once a community campaign to have that pumping station listed succeeded days before Dairy Crest demolished it, the scene was set for Atmos Totnes to get creative.   It came up with designs for the site, rallied the community, developed business plans and built a team to drive the project forward.  Totnes Community Development Society was formed from a coming together of Transition Town Totnes and Totnes Development Trust to provide the vehicle to carry things forward.

When, by the early part of 2012 it felt like this was all having little or no impact on the thinking of Dairy Crest, a community campaign was started, called “Atmos Totnes: the heart of a new economy”.  Its iconic red heart logo began popping up in windows and on lapels around the town.  Jonathan Dimbleby was unveiled as the first Patron at a photo opportunity at the site gates attended by hundreds of people.  This was followed by the unveiling of Tim Smit and Kevin McCloud, and lastly Hugh Fearnley-Whittingstall, whose visit drew huge crowds again. 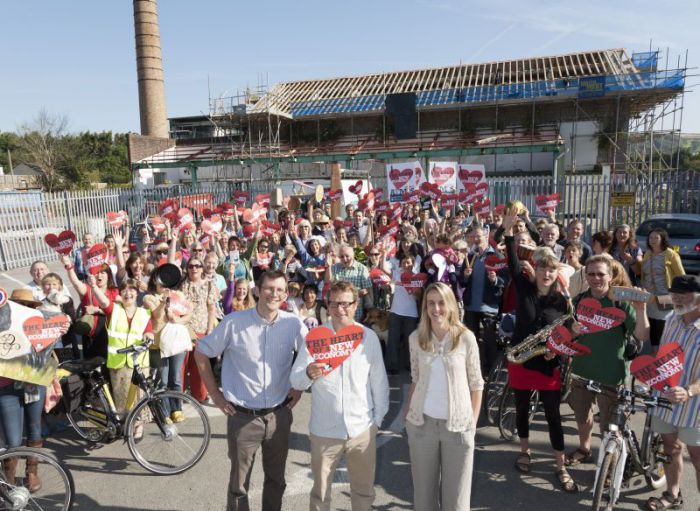 A meeting with Dairy Crest in the summer of 2012 shifted the ground, and it felt like finally it began to become a matter of “when” rather than “if”. Since then Atmos have been negotiating the final arrangement, and on 18th August signed a contract with Dairy Crest.  Then, on Thursday 25th September, the public announcement was made.

The community was invited to the site, where they were invited through the site gates for the first time in seven years.  Early that day Atmos had tweeted quotes from Charlie and the Chocolate Factory, such as

“The children stopped jumping about. All eyes were fixed upon the gates”.

A statement was read out, a group photo taken and an incredible Atmos cake, produced from the kitchens at Schumacher College, was shared out. 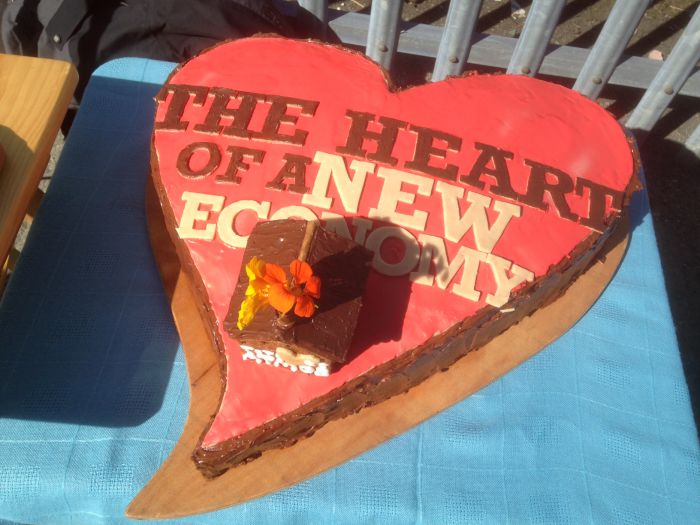 The deal represents a national first.  You can read it in full here, and some Frequently Asked Questions here.  Here is a section from the statement read out on the site on the 25th that sets out the bones of the agreement:

The agreement sees the site in three parts, as detailed in the map below: 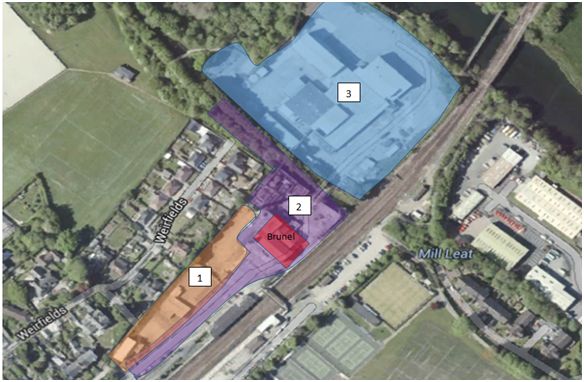 The 2012 Localism Act gives communities a number of significant new powers, one of which is a Community Right to Build Order (CRtBO).  This allows communities to design the development they wish to see and gives them a new route to planning.  From the beginning of next month, Totnes Community Development Society (TCDS) will be engaging the community in creating a masterplan for the whole site, including McCarthy & Stone’s proposals for a development of specialist housing for older people on this site

In May 2015 TCDS will be submitting a CRtBO for Parts One and Two.  This means that what is built, as well as how it’s built and to what standards, will be determined by this community.  To the best of our knowledge, this has never happened before, anywhere.

This announcement represents the community taking a first significant step towards taking greater control of its own destiny.  As a national first, it offers the potential to showcase a whole new approach to development, one based on community support, sustainability, a new economic model that builds and nurtures local economies, social justice, creativity, the arts and meeting the needs of this town rather than, as is so often the case, the needs of developers and distant investors.  For a town currently under siege from developers, demonstrating such a model could not be more timely.

So, all being well, we see the timetable of what happens next like this:

This is a national first, and represents a big step forward for Transition. It’s the first Community Right to Build Order run anywhere in the country.  It is the first time a developer has submitted themselves to such a degree of community input.  It is the first attempt to really model what a Transition-inspired development could look like. 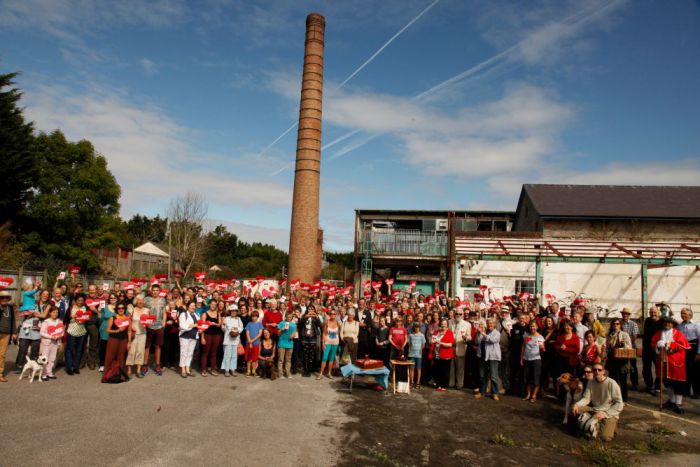 I’ve waited seven years to write this article.  It’s been seven years of highs and lows, of moments of intense frustration and great elation, of patience and determination.  Yet throughout those seven years I never doubted that I would one day get to sit and write it.  At a time when the development machine is increasingly out of control, disconnected from local needs and wishes, and retreating from the idea of truly low carbon housing, it is a precedent that couldn’t be more important.