Rob Hopkins reviews a new book “Advertising Shits In Your Head” which argues that the best strategy for dealing with the advertising industry is to take it on headfirst.

I first came across this book when I became one of the 202 people who supported the crowdfunder that enabled it to be published, purely on the basis that any book with that particular title deserves to be published.  The book itself arrived the other day, and it’s fantastic (you can either read the whole thing free online here, or buy it here).  But why, you may be wondering, would I be reviewing a book about advertising on a website about Transition? “What’s the link, Hopkins?”, you may currently be shouting.  And well you might.  Hopefully by the end of this that link will be clear.

Advertising Shits In Your Head (no author is given), is a pocket-sized book, but it’ll burn a hole in any pocket you put it in.  It’s a powerful tirade against advertising and what it does to our minds, to our culture, to our planet.  But not content to sit and fulminate about it, it is a book that’s about action, about actively reclaiming our mental environment.  As Banksy puts it:

“Any advert in a public space that gives you no choice whether you see it or not is yours.  It’s yours to take, rearrange and re-use.  You can do whatever you like with it.  Asking for permission is like asking to keep a rock someone threw at your head”.

This is a fascinating primer on advertising, its history and evolution, the thinking of those behind it, and why we need to be rid of it.  Advertising has infused itself into our culture to the extent that often, consciously at least, we barely notice it any more.  In the UK, the average commuter is exposed to more than 130 adverts featuring over 80 different products during a single 45 minute London Underground journey, and in a day, most London residents will be exposed to around 3,500 commercial messages.  None of which we opted into, signed up for, or even want.  In these times of austerity, Councils now save money on building bus stops by allowing private companies to build them for free, in return for the advertising revenue from all its services.  Advertising has become, as the book states, “visual pollution”.

It is harmful as well because it is drip-drip instilling us with extrinsic values, those values that reinforce conformity and a focus on achievement, power, financial success and image, as opposed to intrinsic values, those founded on affilitation, self-acceptance, community feeling, benevolence and universalism.  Most advertising is designed to appeal to our extrinsic values, and to cultivate dissatisfaction, unhappiness and acquisitiveness.  As Jordan Seiler, quoted here, says:

“I think it’s important to question the monopolization of our public visual environment for commercial concerns and what that means for the determination of our collective social agenda.  Considering the great hurdles we face socially and environmentally, the commercial discourse we surround ourselves with not only ignores our current reality but actively works against it by distracting us from each other in favour of ourselves”.

From a Transition perspective, this book is important because Transition is about communities reimagining and rebuilding their world.  And that “reimagining” bit is really important.  Matthew B Crawford, in ‘The World Beyond Your Head’, talks about the need for an ‘Attentional Commons’.  He writes:

“There are some resources that we hold in common, such as the air we breathe and the water we drink.  We take them for granted, but their widespread availability makes everything else we do possible.  I think the absence of noise is a resource of just this sort.  More precisely, the valuable thing that we take for granted is the condition of not being addressed.  Just as clean air makes respiration possible, silence, in this broader sense, is what makes it possible to think”.

When we are constantly being given messages that reaffirm the inevitability, the monolithic permanence of consumer capitalism, our drive to imagine its sequel, its dissolution and replacement, is diminished.  Yet the fightback is well and truly underway.  In 2007, Sao Paolo banned public advertising, and in 2015, Grenoble in France did the same, stating that they were “taking the choice of freeing public space in Grenoble from advertising to develop areas for public expression”. 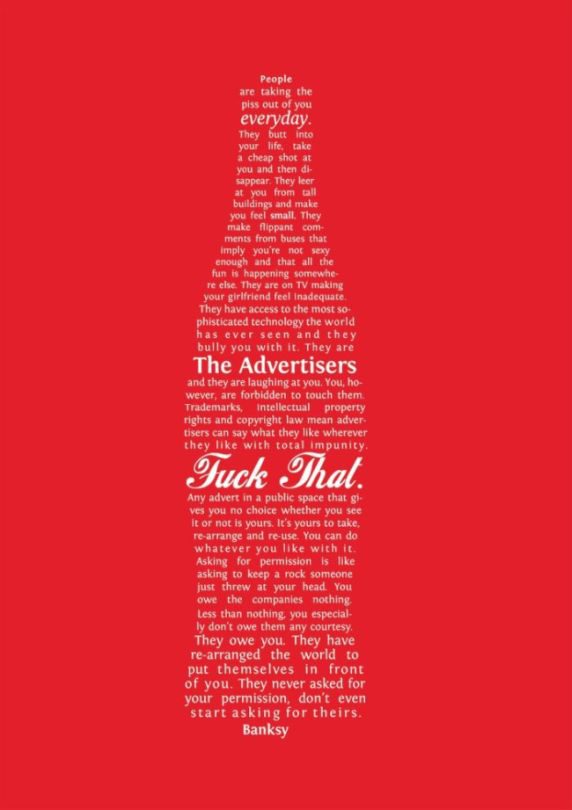 But, as the book acknowledges, it is unlikely that many others will follow suit, or stand up to consumer capitalism in such a way.  So therefore, we need to act.  Inspired by the French Situationists, this book tells the story of the Brandalists, the Subvertisers, Adbusters, the Billboard Liberation Front, the AdHackers, the Special Patrol Group, all of whom are taking matters in their own hands, applying creativity, imagination, and a big dose of naughty to reclaiming our mental space. 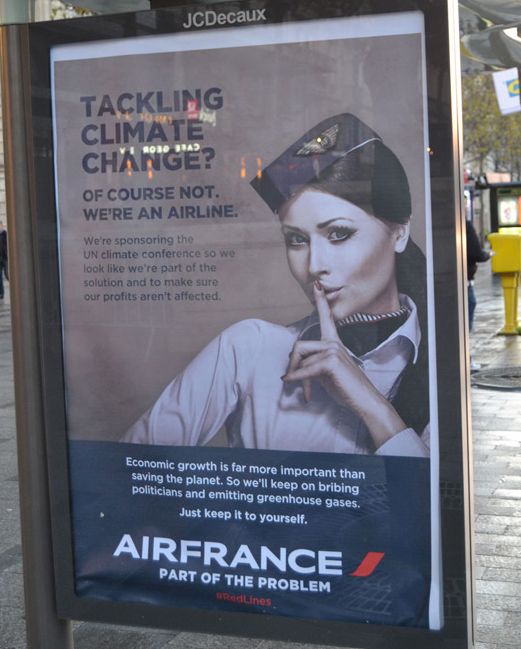 The book is full of great examples of people taking matters into their own hands, creating their own posters, and putting them up.  There’s a great section by ‘Dr. D.’ called ‘An Idiot’s Guide to Billboard Takeovers’, and a great step-by-step illustrated guide called ‘How to hack into bus stop advertising spaces’.  There are different places where you can get sets of access keys for most billboards (what they rename as ‘Public Access keys’), and if people find one that can’t be opened, they are invited to send a photo of it to Jordan Seiler along with the hashtag #YeahWeGotKeysForThat and he’s create a key.

There’s a great section on what your legal defence could be if you are prosecuted for this (although it is made very clear that wearing an orange hi-viz jacket makes that unlikely).  It ends, “the legality of subvertising seems, currently, to be something of a grey area; what’s clear is that subvertisers see their action as morally defensible, regardless of the legal position”.

The question it brought up for me is what to post instead.  There are great examples here: the real figures of police deaths in custody in response to a police PR campaign, work by local artists, raising local issues.  I particularly loved the one below, and the feeling it gave of the delicious silence that follows when someone first turns off a horrible noise, like a car alarm.  What would you like to see in billboards you pass on a daily basis?  How might they reinforce, rather than undermine, the efforts of your community to become more resilient and connected? And hey, why not get some printed, and put them up anyway? 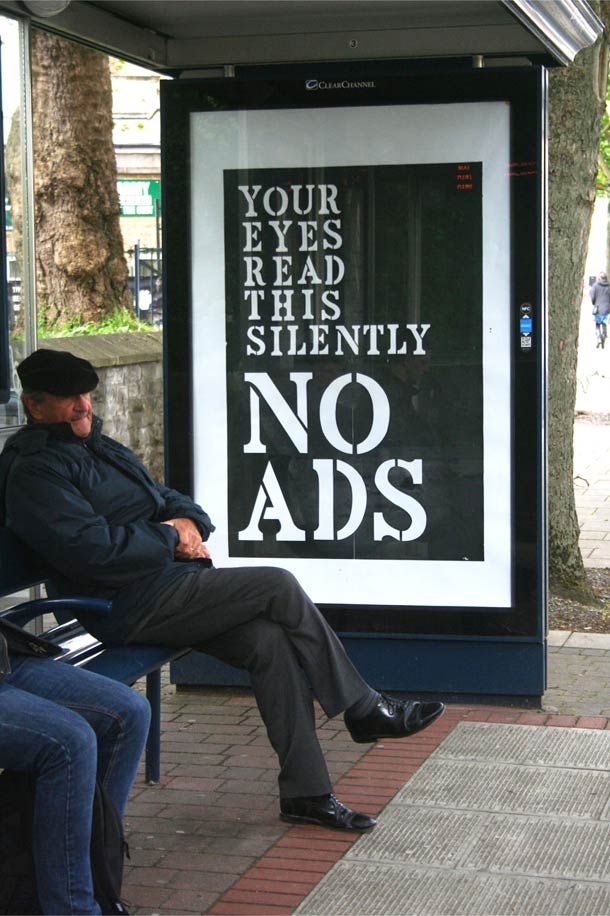 This is a brilliant little book, highly recommended.  It is thought-provoking and very informative, but it’s also a powerful push to look afresh at the world around us, and the state it’s in.  It is also a powerful invitation to act.  I will leave the last word to Matthew B Crawford, who puts beautifully why I think this book matters:

“If consumer capitalism can go on only by continuing to accelerate the “intensification of nervous stimulation”, there would seem to be a fundamental antagonism between this form of economic life and the individual who inhabits it”. 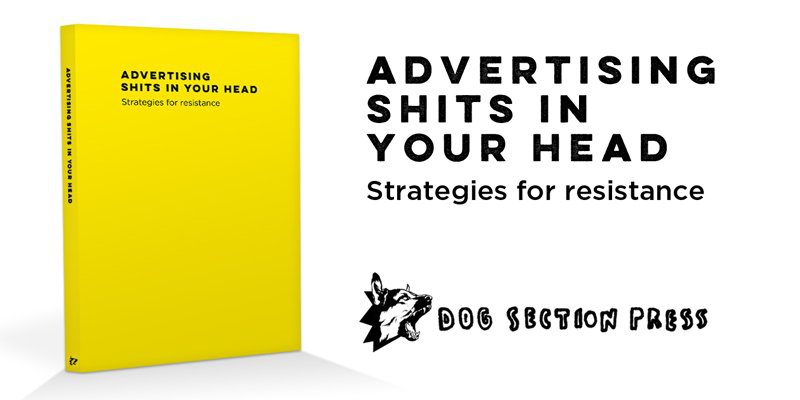