Transition Italy recently held the first gathering of Transitioners from across the country, to celebrate 5 years since Transition first arrived on those shores.  We are very grateful to Deborah Rim Moiso for sending us the following report of the event:

About a hundred Transitioners and their friends assembled in Passignano on September 20-21-22, up in the oak-covered hills above Lake Trasimeno in Umbria, Central Italy, to celebrate 5 years’ activities of Transition Italy, our national hub, in a three day “Transition Fest” aimed to empower and strengthen the national web of initiatives… as well as to have a lot of fun! 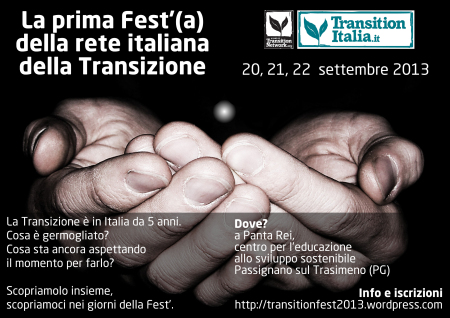 The 2013 “Transition Fest”, the first such gathering in Italy, was designed through an online Dragon Dreaming process (for more on Dragon Dreaming, see here, the design method created by John Croft and his team to integrate planning, dreaming, acting and celebrating in a single flowing web.  Pierre Houben, from Transition Ferrara, was the initiator of the group:

“Once the partying was over, I really wanted to thank everyone for their help in making my dream come true… but I was at loss for words. How do you talk about a dream which is collective, whereby everyone came together to make everybody’s dream a reality?”

Together with Deborah Rim Moiso, from the national hub and trainers team, Pierre assembled a team: Manuela Trovato, of the Sicilian Permaculture Group, is from the deepest South, and brought inclusion issues and great ideas on how to facilitate participation from the far-flung corners of the nation. Valentina Bortolussi, with her Porto di Transizione group clustered in the vicinity of Venice, was the Inner Transition voice for the team. Participating, she says, strengthened her resolve to work with other groups with a focus on the inner dimension of the “Great Turning”. Federico Carocci, from the nearby Transition Trevi steering group, lent a hand with local affairs. 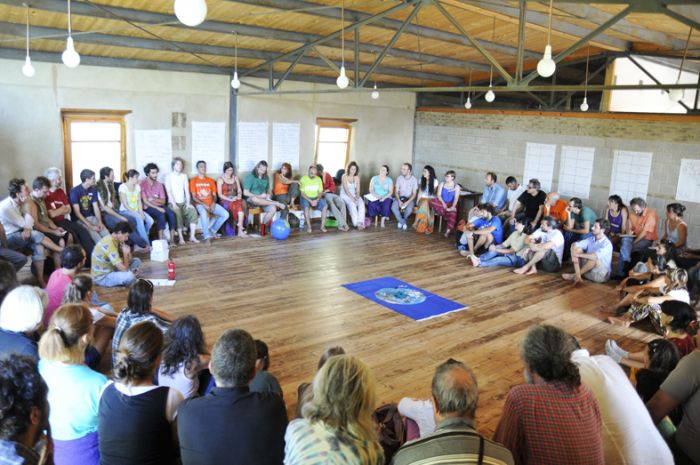 First things first, a place was chosen, the unspeakably beautiful environmental education centre Panta Rei, with its view over the lake, wood and cob architecture, fantastic cuisine accommodating all tastes, flexible room use, guaranteed sunshine (seriously!!) and even tree houses! If you need a venue for a gathering in the Mediterranean countries, look no further!

Feedback forms distributed at the end of the event confirmed our suspicions: Transitioners love to do things themselves, and the best thing you (as facilitators) can do is clear the space, set the boundaries, and let the fun begin. Activities offered by participants as “giveaways” to this temporary community included circle dancing and meditation in the morning, building board games to explain systems thinking, workshops on non violent communication and facilitation, and even a huge Mandala made of coloured salt which we then all danced on to return the colours to the Earth (and to most everything we stepped
on for the rest of the day). 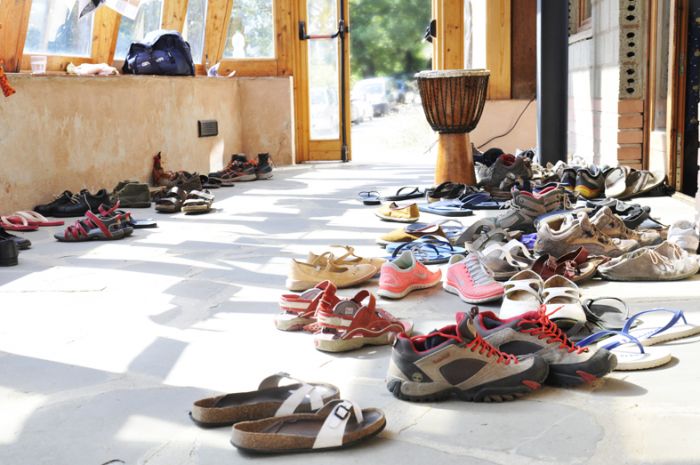 Whole-group activities (and this was a BIG group!) included daily opening and closing circles, music around the fire in the evening, a “Marketplace of possibilities” morning dedicated to networking, and an amazing evening of “Pecha Kutcha” presentations from all over. We really recommend this format, which ensured the flow of the evening was fast-paced, never boring, and helped everyone keep their presentations to the point. It certainly facilitates fun and laughter.  Perhaps a time for discussion and reflection could have been incorporated afterwards (in this case, it got late at night and we all went to bed in our wonderful wooden cots decorated with willow branches).

Much good use was made of the space, with participants encouraged to decorate, hanging up posters and flyers from these past 5 years in Transition, trading clothes, seeds, books and useful material such as the brilliant Transition Cards (which in Italy we’ve taken to calling “The Transition Tarot: it can’t really tell you the future of your initiative… or can it?”). 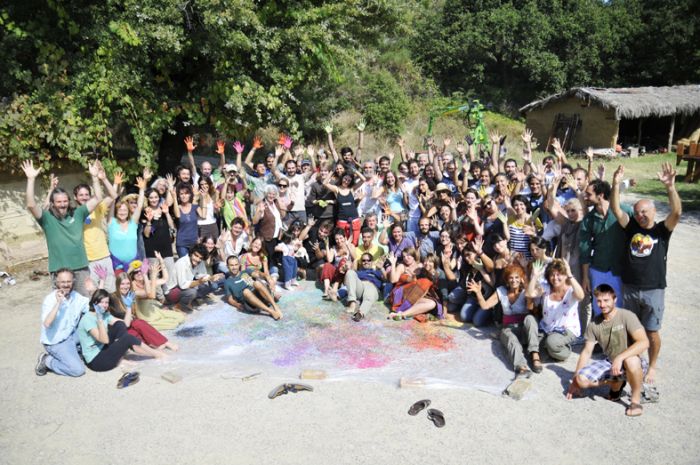 A Press Office team was assembled for the occasion, with the mission of gathering photos and videos of the event and getting the press interested (we had journalists buzzing around… and getting involved as well). Their work, by the way, was also enabled by the Transition Network through dedicated funding for this event, so thank you all (Filipa, Ben, that’s you!).

Looking for a way to put all this in words, I turn to systems thinking: each element of the net is strengthened in opening itself to others. In such a gathering, so much information was exchanged, and so many hugs, smiles, encouragement and laughter, that we emerged really sensing how much stronger our Italian web had become as an outcome. In the words of Roberto Salustri, a participant and core member of the Castelli Romani Transition group:

“It so happens when we come back from a meeting related to practical ecology that we feel accomplishment and we’ve learned something new, but this time I’ve come back home really happy!  Happy because I was there and I was able to participate in working groups, I met new people and I found again old friends. Happy for not always beeing “in agreement” with everything but with the absolute certainty we could look for a solution in order to find common ground.  Happy about talking and discussing with so many people allowing me to learn about new experiences!  Happy because dreams can come true and we have begun to do so and because there are millions of people  who are already doing it. I felt invincibile not as a person but as something greater than the individual, something that lasts, something that was already there and there will always be as long as there will be the humanity. The Blessed Unrest that will save the world.  I’m glad I spent three days with great people, the same people I see every day, but I was able to know in the most  positive way. Leaving was really sad because I was waving friends but at the same time I was happy because surely we will meet again.  May be I will not see the better world that I’ve helped to create but I’ll be happy anyway!  A hug to everyone, those who were there, those who could not come and to those in the future.  See you soon, Roberto”

Lastly, here are some rather fetching portraits of some of the people who came… 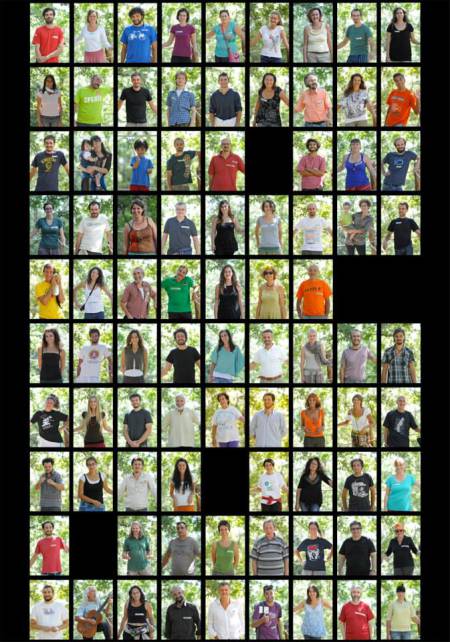