Following the expansion of the Transition movement globally in the late 2000s, community groups and activists in Aotearoa New Zealand began establishing Transition Town groups following a similar model as the original Transition groups in the U.K. In the past two years, I was involved in a team of researchers (Drs Sophie Bond and Amanda Thomas) who were based at Victoria University in Wellington, the capital of New Zealand. The team worked with two Transition groups to better understand how Transition came to our country and how the movement is maintaining momentum.

The work included an online survey of Transition groups across the country so we could get an idea of how Transition was being carried out nationally. In addition, I undertook a study of the grassroots resilience capacities of a community group styled on the Transition group movement, called Project Lyttelton, who participated in local recovery following the Christchurch 2010/11 earthquakes.

The Transition movement in New Zealand was in part, inspired by a talk given in the mid-2000s by Richard Heinberg, the permaculture expert. Following the talk, many groups were established and membership expanded further with the global financial crisis and a spike in oil prices. The image below displays the number of groups listed on the NZ Transition website, which spans involvement of both rural and urban communities across the country. Despite this strong start, we found through the online survey that many of these groups have ceased to function, although a dedicated contingent remained. 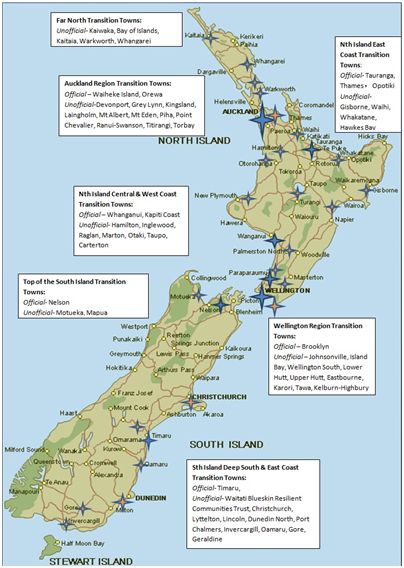 For the research looking into Transition, we worked specifically with the Brooklyn Food Group (formerly the Brooklyn Transition Town) and Transition Town Lower Hutt. While neither of the groups were following the Transition ethos of establishing an energy descent plan, both were engaged in activities that were having tangible benefits to their local communities.

This pattern of activity was similar to what we found through the online survey, many groups were not spending a lot of time on energy descent plans, instead working on building community gardens, alternative currencies and education campaigns.

Many of the people we talked to believed that the energy descent plan, while a valuable tool and idea, was not as well suited to the New Zealand urban environment where there is little ability for citizens to be as involved in local government as the original Totnes model showed.

However this did not mean the NZ Transition groups were not creating change! Both groups we worked with had carried out extensive activities in the community. For example the Lower Hutt Transition Town carried out an educational lecture series that consisted of a lecture every week for four months. The same group also set up a Koha Café. In the Māori language, Koha refers to a concept of reciprocity and giving. The café operated once a week as an environment where people could come and participate in discussion about Transition issues, a meal of organic food donated from local stores was also served in exchange for koha – a gift or donation.

The people we talked to said this provided a great way for get together and provide support to each other, especially those at home with young children or those looking for work that are often socially isolated. The Koha Café was eventually dis-established, but members were positive about this as the energy that went into the Koha Café was redirected into a timebank alternative currency project that emerged directly out of conversations at the café. At the time of the research, the timebank had secured substantial funding and was preparing to launch. 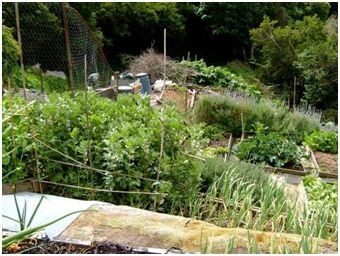 The Brooklyn Food Group provided a different example of a thriving Transition group. The food group was previously part of a wider Transition group that dis-established after struggling to gain ground on local energy projects. However, the food group still operates as a dedicated project that involves a community garden, a community orchard on local government land and a share garden system where people without gardens take care of gardens with owners who cannot manage them anymore. So even with the original group no longer operating, positive effects continue to be felt in the community.

In fact, many of the members we talked to were incredibly enthusiastic and positive about the food group. They believed that the small actions they were taking in their community were contributing to a wider shift in culture and values that support people to be involved in their community and learn to grow their own food.

As part of another research project I have been involved in, I have also explored the positive effects of Transition groups after a disaster. Following the deadly earthquakes in Christchurch in 2010/11, I worked with Project Lyttelton, a group that employs a ‘transition’ like philosophy of re-localisation and local action. Through this work it became apparent that the social networks that are established through Transition groups are invaluable for supporting post disaster response and recovery. The existence of an already formed group of individuals who knew each other informally through their neighbourhood and formally through the organisation provided a solid foundation for community involvement in the aftermath of the earthquake. 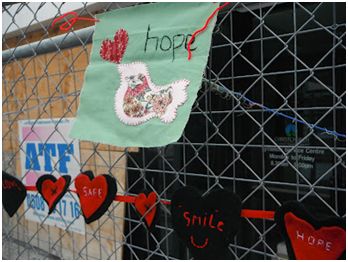 For example the timebank became an integrated part of the response teams alongside the Navy, Army, Civil Defence and Fire Brigade. This created a citizen contingent in addition to the formal response where local people the elderly with meals and other needs, cared for each other’s children and carried out minor repairs through the timebank. Having an established system meant that Project Lyttelton could be integrated into the emergency response officially as well as resulting in the operation being carried out smoothly.

However, what emerged from the interviews was that one of the most meaningful aspects of the group was the social support that people get from being involved in a local group such as Project Lyttelton or Transition Towns more generally.  One of the more iconic projects involved a group of crafters who created fabric flowers to attach to fences around rubble and to hand out to search and rescue teams. These groups provided priceless support and comfort to the community. Their existence was in part due to the already organised and connected community that existed because of Project Lyttelton. The circumstances in Christchurch following the earthquake were an extraordinary occurrence; however the social support gained from groups such as Transition Towns is a resource that can be drawn on to support individuals and communities in times of hardship and celebration.

While the history of Transition in NZ is a bit rocky, from this research in the last few years we have found a contingent of Transition groups making a concerted effort in their community towards achieving real and practical outcomes towards climate change and peak oil adaptation.