I first visited Denmark in 1995 when I was doing my sustainability degree.  We visited Odense, and spent a week immersed in wind farms, district heating schemes, co-housing projects and a raft of other sustainability schemes.  Returning to the UK afterwards, leaving the land where everywhere you looked, even then, there were wind turbines, felt like going back to Medieval times.  For me, every subsequent visit to Denmark brings a much needed top-up of belief, a taste of what it’s like when low carbon technologies become an everyday thing. This trip, to be part of the Det Faelles Bedste (‘The Common Good’) convergence in Hvalsø, was no exception. 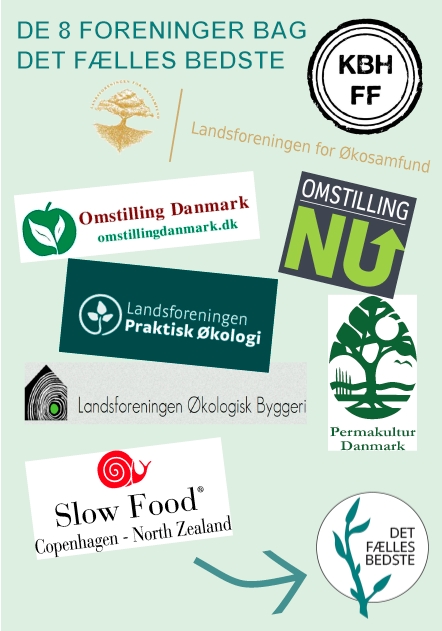 This three day event was organised by a loose coalition of 8 Danish organisations, which includes Transition Denmark, Slow Food Copenhagen/North Zealand and Permaculture Denmark. These 8 have been working together, meeting every three months since 2012, and in 2014 held their first joint convergence, on the island of Samso, home to an amazing experiment in renewable energy.  That was attended by 450 people, and this one, 2 years later, was attended by over 2,000, with 1,100 pre-booked.

It’s an interesting time in Denmark.  For so many years Denmark has been a world leader in renewable energy, sustainable transport (a story told in the film ‘Demain‘) and other green technologies, but recently it elected a right-leaning government who have begun to roll back these advances, claiming that for too long Denmark has led the world, and that now it is time for other nations to step up and ‘shoulder the burden’ of being pioneers.  A pretty crap, and indefensible philosophical stance I’m sure you’ll agree.

The village of Hvalsø has a population of around 4,000 and sits within the municipality of Lejre.  It has become known nationally for its decision, across the municipality, to go organic across all levels of the education system, within the public offices and elsewhere, hence it felt like a natural place to host the second national convergence.  When the municipality were approached, they were thrilled by the possibility, and offered the local school, sports halls, library and other public buildings free of charge as venues.

My journey to Hvalsø was by train, a very, very long journey.  Travelling to Denmark involves passing through northern Germany, and as Denmark approaches, the number of wind farms grows exponentially, until wherever you look, there they are, graceful sentinels across the landscape.  Here is one we passed.  Kinda fills the heart with hope doesn’t it?

The train to Roskilde is one of very few in the world that goes onto a ferry, a first for me.  The 45 minute ferry trip goes past a huge offshore wind installation, as well as offering a great view of those along the coastlines.  Coming from a country whose government would have you believe that wind turbines are expensive, neffectual and ugly, it is so refreshing to visit a place where they are commonplace, beautiful and highly effective, and to marvel and how that is. 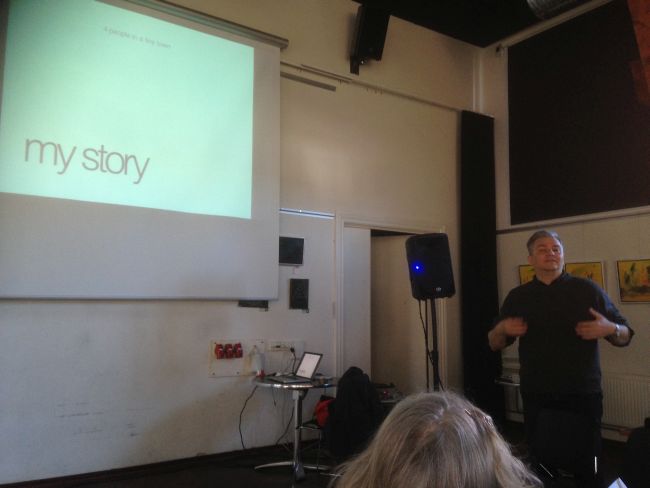 On my first day at Det Faelles Bedste, there was not a cloud in the sky.  You’ll find a great video made by the organisers about the event here.  The programme offered over 180 workshops spread over the first two days, a dazzling menu of delicacies.  I went to one by Cristiano Bottone from Transition Italy (partly because I really wanted to hear it, and partly because it was the only one in English…).  It was a fascinating presentation, reflecting on the learnings from the work he is doing in Italy working alongside businesses and other institutions to inoculate Transition thinking there.  It is work that is starting to yield some remarkable results.

After his workshop we sat and I asked him to tell me more about his work:

After lunch there was a big opening ceremony on the open air stage that had been built for the occasion.  Much of what was discussed went over my head, but it featured a very rousing compere, a welcome from Mette Touborg, the rather wonderful Mayor of Lejre commune, music, group singing and then, at the end, a short chat from me.  This was followed by the planting of a chestnut tree to celebrate Earth Day. 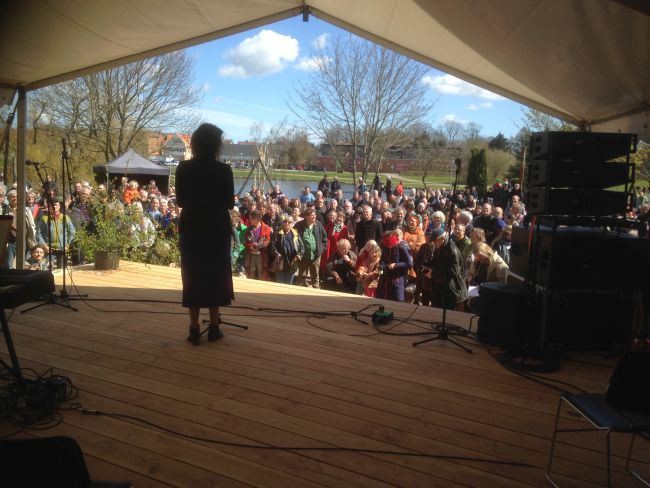 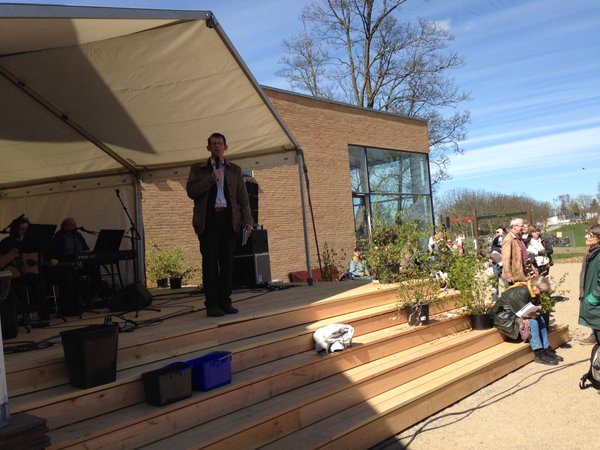 After this was the Danish premiere of the film ‘Demain‘ (‘Tomorrow‘) in the local cinema.  I gave a brief introduction to the film, and everyone I spoke to afterwards really loved it, walking with an extra spring in their step.  En route to the cinema I spotted these wonderful examples of what landscape designers call ‘desire lines’, when people choose better routes than those laid out for them by planners.  Felt kind of symbolic, a useful metaphor for what we are doing in Transition… 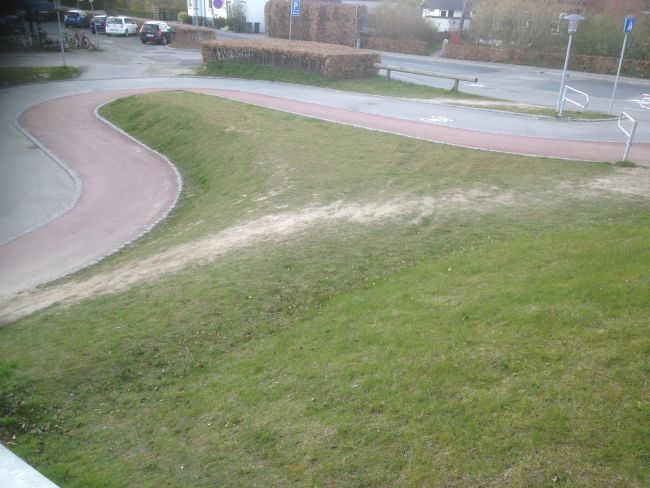 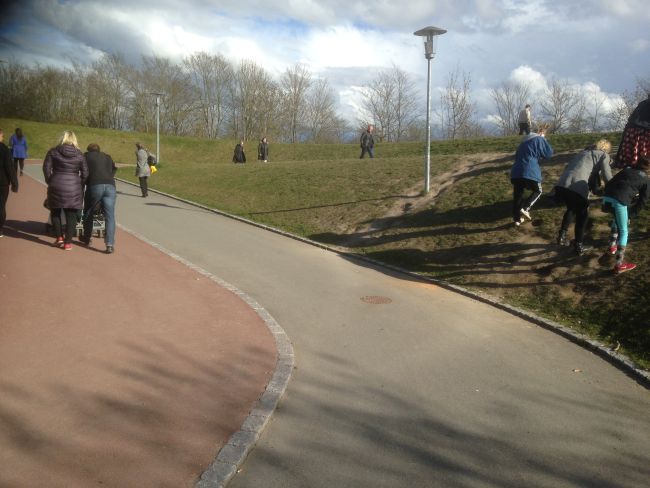 The two big sports halls were hosting an amazing market with stalls from a huge range of projects, organisations and businesses.  There were amazing handmade tools, plants, clothes, projects like permaculture housing developments, and some great natural building demonstrations.  My old friend Fleming Abramsson of Fornyet Energi (“Re-vived Energy”), the mass stove building master craftsman I first met in Ireland over 13 years ago, and who is still going strong building an
amazing variety of stoves while also pioneering natural building, cob, clay plasters and so on.  It was wonderful to see him. 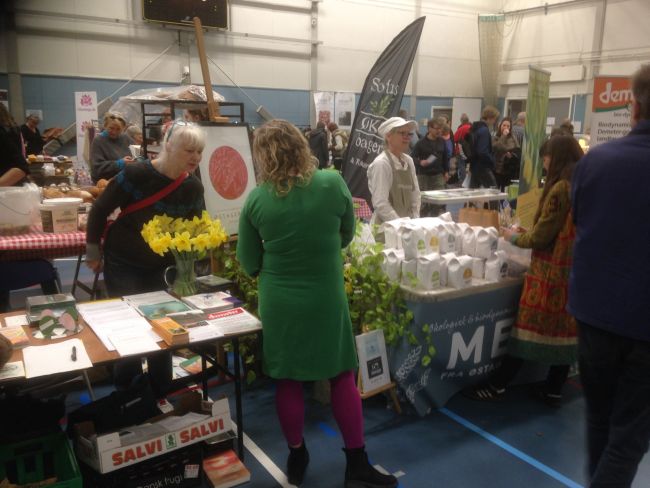 There were also some great Modcell-like strawbale building technologies.  In the evening there was food, music, some rather fine local beer, and good conversation.  My day drew to a close watching a glorious sunset and a huge pink cloud whose pinkness grew and grew to a crescendo. 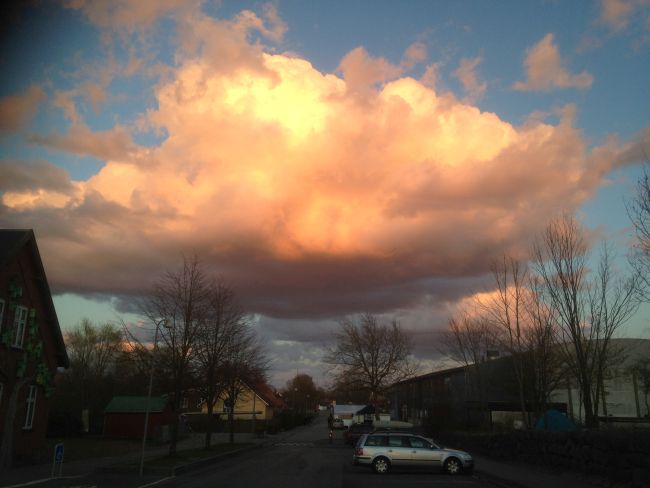 Day two didn’t need much from me until 1pm, so I was able to chat to some people, spend a bit more time wandering round the market place, and doing a couple of interviews.  At one point, having started the day with glorious sunshine, we had 10 minutes of snow, very exciting for an Englishman whose weather rather appears to have given up on the whole idea of snow.  After 10 minutes though the sun was back and everything went back to normal. 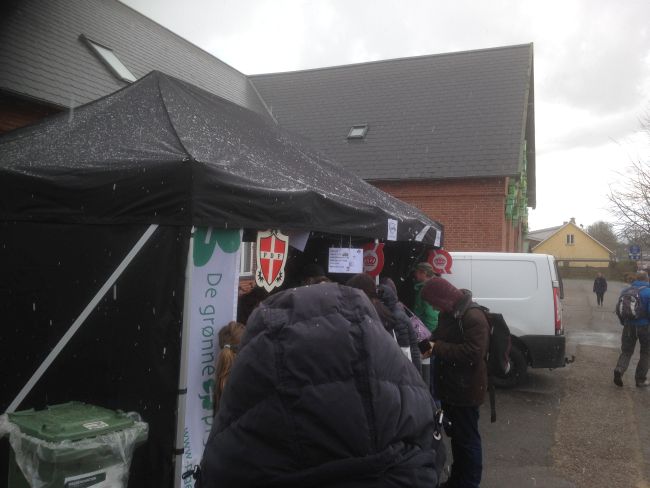 At 1pm it was time for my main contribution to the event, a workshop in the cinema.  I told some of the 21 Stories of Transition, got the audience talking to each other about the threads they saw running through them, and then we had a panel with Cristiano, alongside Erik and Annette from Transition Denmark.  Much good conversation was had in a really great session.   Luckily I also sold all the books I had carried all the way from Devon, thus enabling me to then travel home much lighter.  Then, while many of the organising groups held their General Assemblies, I went to the screening of Avi Klein’s film ‘This Changes Everything’, based on Naomi Klein’s book of the same name.  I will review this here in a couple of days.

It was a wonderful event.  As Tanja Aertebjerg of Transition Denmark put it when I interviewed her about Det Faelles Bedste, “every face you see is smiling”.  She was right.  Here is our conversation,  where she talks about how the festival came about and her thoughts on how it turned out:

No Transition-infused event is complete without a celebration.  The evening was a HUGE celebration, with food, drink, singing and dancing, with so many people that the main sports hall was packed and half as many people were overspilled into the second hall.  A fantastic all organic meal was laid on for everyone, with local breweries and cider-makers on hand to provide the liquid refreshments. 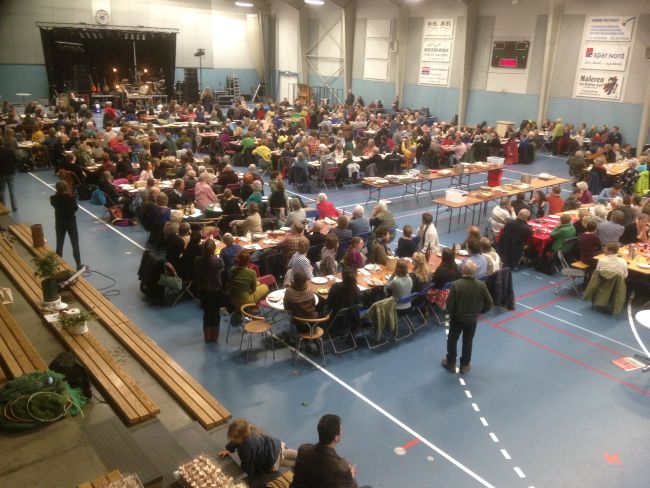 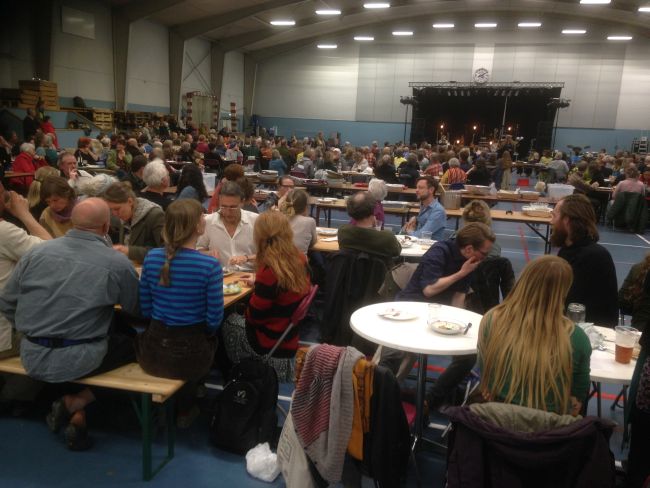 There were group sing-alongs (very popular in Denmark apparently), and some remarkable female singing from Iceland, all in very high pitched tones, quite something, like a sort of Viking Bjork, while I tried to follow the closing minutes of the Everton vs Manchester United FA Cup semi-final on Cristiano’s iPad using the BBC’s invaluable text commentary service.

After a very impressive array of puddings, a band from Sweden got the evening up and dancing (I mean everyone had puddings, not that the band pigged all the puddings prior to playing).  Here’s  a clip of them:

I headed off to bed in order to be ready for the journey home the next day, but the band was followed by a DJ and the whole thing went on until 2am, by which point I was well and truly tucked up in bed.  The third day, which I missed, was more focused group work with people meeting around different themes (food, building etc)or in local groups to create densities in initiatives to become more visible and strong before the local elections in 2017, where the aim is to put pressure onto the politicians to take sustainability and environmental issues more serious. 4 years ago only 4 candidates mentioned those topics in the campaign. The aim is that all 98 will in 2017.

Heading home the next day I was puzzled by the fields covered with snow sitting alongside fields without even a flake of it.  Can anyone explain why that might be? 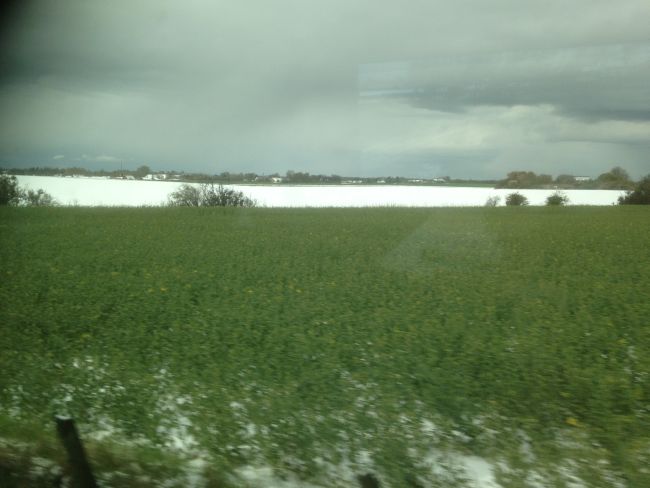 In my interview with Tanja (above), she told me:

“I see the transition from the 60s and 70s until now as a Dragon Dreaming kind of thing … first they did a lot of talking and dreaming, and now we are actually doing it… and actually now, we are in different stages but there is lots to celebrate already”.

As the train headed home, I was touched again by the preponderance of wind turbines, so will leave you with this clip of another, filmed from the train.

It is through the lens of these gently-turning blades that we can glimpse a kinder, more resilient, more peaceful and healthy human culture, the culture so beautifully celebrated during these three days in Hvalsø.

I’d like to thank Tanja and the rest of the Transition Denmark team for their invitation, for their welcome and for a great couple of days.  Also thanks to Rolf and Karin, my wonderful hosts, to Cristiano for his companionship, and to all the great people I met while there.