I was recently travelling to Ungersheim in France to give a talk, a journey that involved passing through several train stations.  On the journey I had been reading Michael Shuman’s fantastic new book ‘The Local Economy Solution‘ (highly recommended).  In it, he paints a rigorous and passionate case for economic localisation, and in particular what he calls “pollinator” enterprises.

A pollinator enterprise is self-financing, and its role is to weave the local economy back together again, to bring about a different local economic model than the current one of throwing open local markets to big companies, focusing instead on growing the local sector.  In many ways it’s a model that sounds like what REconomy is doing, that combination of Local Economic Blueprints, Local Entrepreneur Forums, business mentoring and support, crowdfunding, local currencies and so on.  It certainly feels very affirmingly familiar, so far, but I’m only on page 57 so I don’t know where he may yet take it.

I arrived at Paris Gare de l’Est with Shuman’s ideas going round and round in my head, and feeling like I quite fancied, in the 50 minutes before my train, sitting down and having a cup of tea.  Gare de l’Est is a big station, but while there were several places you could grab a panini and eat it standing up (all chains so far as I could see), there were only two places where you could actually sit down and have a drink.  One was a very large Starbucks, whose seating area took up a meaningful chunk of the concourse.  The other was much smaller.  And it was also a Starbucks.  Two Starbucks, one large, one small, within a stroppily-hurled coffee cup’s distance of each other.  That was it. 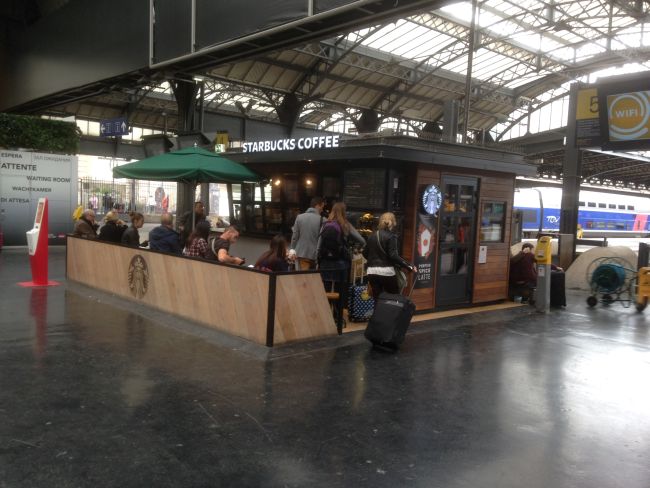 I’ve written before about the potentially powerful role that train stations could play as pollinators.  With so many people passing through them, they have huge potential to incubate new enterprises, to showcase local food, local dishes, local entrepreneurs.  Clearly someone in the management at Gare de l’Est has taken the decision that Starbucks can pay the most rent so let them have the space.  But what if they had taken a different approach and had several smaller outlets?  If in unused space at the station they had created a La Cocina-style incubator for new food businesses, and featured them on the station?  What if stations (and now we’re on the subject, other public spaces like schools and hospitals) were required, when deciding how to lease their space, to maximise social return, a cultural return, the Multiplier Effect, and also a public health return?  How might that nudge their thinking, and what we might end up with instead? 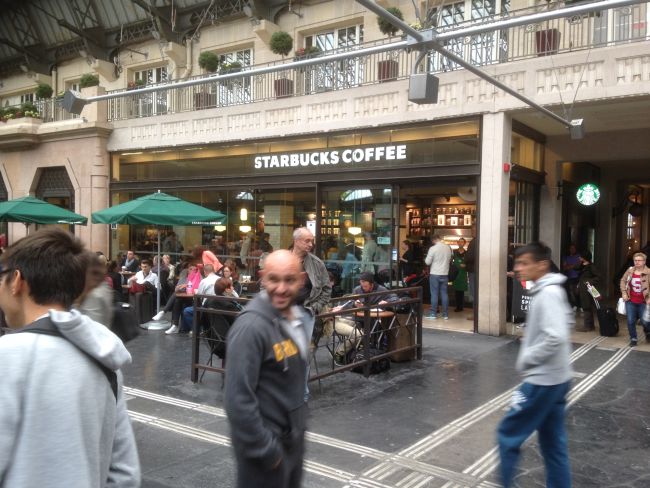 It was recently reported that WH Smith had been found out for charging up to 90% more for goods sold in their shops situated in hospitals than on the High Street, outrageous practice I grant you.  A survey in Leeds, for example, found them to be charging £1.89 for a 750ml bottle of water in the hospital, but just £1 in a city centre shop.  But in all the coverage no-one asked why it was that in many hospitals your self-catering choices are a WH Smith and a Costa, neither renowned for their commitments to local produce or especially healthy fare, both extractive industries.  Hospitals as pollinators?  Is that really such a leap from their current public health remit?

In that previous blog, I mentioned the rather fine craft brewery bar on Sheffield station, and I recently visited the new Kings Cross station and was impressed by the number of small, independent food businesses.  The station at Crystal Palace station features a great independent cafe serving local produce.  There are undoubtedly more.  But the general trend is for them all to be the same dull names: Pret; Costa; Starbucks; Pumpkin; Scoff; Trough; Yawn; Bore (OK, I may have made a few of those up, but you get the point).  Gare de l’Est sits in a part of Paris with a high immigrant community, many of whom are trying to gain an economic foothold in the city, to start their own businesses.  Paris is a city of great food, of regional dishes, of urban agriculture pioneers, and of a rich tapestry of different cultures and their distinct cuisines.  It’s a city that historically sat at the centre of complex, largely localised food webs.  But arrive at Gare de l’Est station and you’d be none the wiser that that was the case.

At the recent International Permaculture Conference I heard again and again the old permaculture maxim that ‘the Problem is the Solution’.  Never are the words more apt than in thinking about Gare de l’Est station.  The solution to some of the problems faced in the area, and the role the station could play in addressing them, is blindingly obvious (to me at least).

In the Transition future world of 2025, I imagine walking into Gare de l’Est, and being greeted by delicious food smells.  Walking down the concourse, I am spoilt for choice.  There is a wide variety of beautifully presented food, made with mostly local ingredients but with recipes from around the world.  My attention is drawn to the Food Entrepreneurs’ School in rooms above the station, training local young people in a range of food-based skills.  The station owners have themselves invested in many of the best entrepreneurs who have come through the School.  It’s a station where bread is baked, beer is brewed, falafels are fried, naans are stuffed and spices are ground.

And then take that and spread it out across the world, station by station.  How much more fascinating, rich and delicious would travel become?  How much more vibrant would each local economy become? We would be so proud of our stations.  They would be how we would show off to visitors how much more interesting we are than we used to be.  Pollinator stations, your time has come.  But not the airports, we hopefully won’t be needing them much by then.  They’ll have been turned into great urban farms: Terminal One Fungi, Terminal 3 Carp and so on.  To quote, as I often do, Elliot Murphy from his sleeve notes for ‘1969: Velvet Underground live’, “I wish it were a hundred years from today (I can’t stand the suspense).”