Over the next few days we will be sharing the winning three stories in our Transition Training competition of courses people did that changed their lives.  I thought it might be a good idea to start with my story of the course that impacted me the most in my life so far.

In June 2001, I got off the bus in a small village in Lancashire, with a rather heavy bag and in somewhat inclement weather, to walk up the hill to Middlewood, a permaculture project set atop a hill in beautiful woodland.  The walk was considerably longer than I had anticipated, the road, seemingly to nowhere, seemed to stretch on for miles.  Eventually I made it there in a somewhat sweaty blather, and found my bunk in the Study Centre, a beautiful building clad in timber from the site, graced, at its heart, by the first masonry stove I had ever seen (see right). 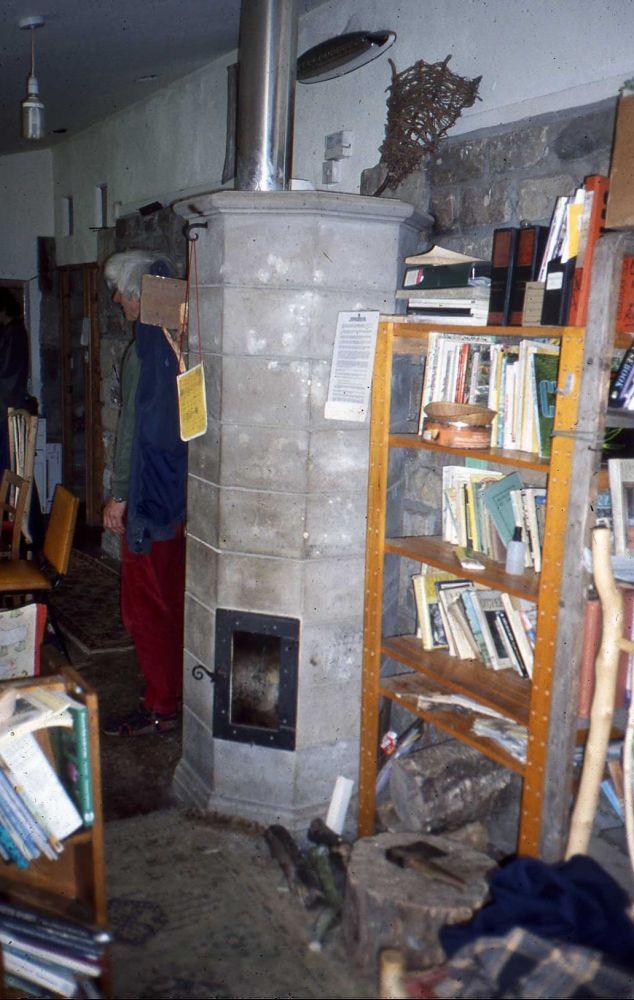 The reason for my trek was to do a course called Teaching Permaculture Creatively, led by Rod Everett.  I had recently got a copy of the book of the same name, by Robin Clanfield and Skye, and had been deeply impressed by its approach.  I was just about to start teaching the Practical Sustainability course at Kinsale Further Education College and was seeking an immersion in different approaches to teaching.

Middlewood was a stunningly beautiful place.  The community there lived mostly in yurts adapted for year-round living, and many worked the land and managed the woods.  There were reed beds, gardens, innovative buildings, off-the-grid renewables and so on.  There was also a beautiful river, woods to get lost in, and the Study Centre had a fantastic library of permaculture books.  And, of course, there were the other course participants, permaculture teachers drawn from across the country. 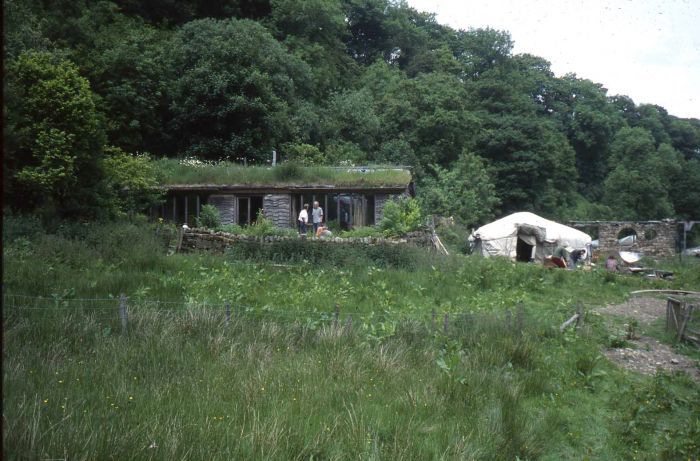 The course itself took place in a large yurt, in the round.  One of the early exercises that really stuck with me was when we got into pairs, and were asked to discuss and list things we are good at.  Once each person had done this, we were then asked to reflect on how it was that we became good at those things.  Did we do a course?  Did we teach ourselves from books?  Did we seek out people who could teach us?  There are many ways in which we seek out what we need to learn, and, as Rod argued, the role of the teacher is to enable people to learn through the whole spectrum of ways in which we learn, not just the sitting-down-and-listening-to-a-teacher way.

We were also introduced to the Learning Pyramid, and how much information people retain depending on the way in which information is presented, and how the best way for people to retain something is for them to teach it to someone else.  Putting this chart up alongside how most learning takes place in schools and universities is pretty sobering. 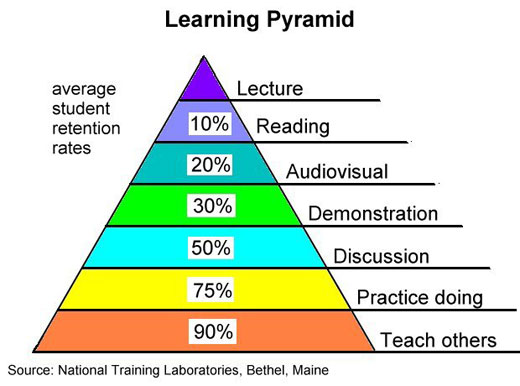 What most impressed me was how much of the course, how much of the learning, happened without your being aware that it was happening.  That realisation came later though.  By the afternoon of the second day I was feeling really pissed off.  It felt like all we had done up to that point was chat, go for a walk around the site looking at things, chatted, eaten and wandered around a bit more.  When were we actually going to start learning stuff?  When would the teaching start?  When I mentioned this, Rod got us into pairs to reflect on what we could remember in terms of what we had done that afternoon.

Sure enough, it turned out we had learnt an astonishing amount of stuff.  The 15 minutes we had spent chatting next to the reed bed actually, it turned out, had furnished me with an understanding of how the whole system had worked, to the point where I could draw a fairly accurate diagram of it. It also left me with a real grasp of soil fertility, the use of different plants in capturing nutrients, and how to use those plants.  And I had thought we were just having a chat.

The 10 minutes sheltering from the rain in the woodshed had left me with a thorough understanding of how reciprocal frame roofs work, and of seasoning timber for optimal efficiency in wood stoves.  Popping in to visit one of the families and chatting to them in front of their woodstove had taught lots about yurt construction, wood heating and adapting yurts to year-round living in the north of England. 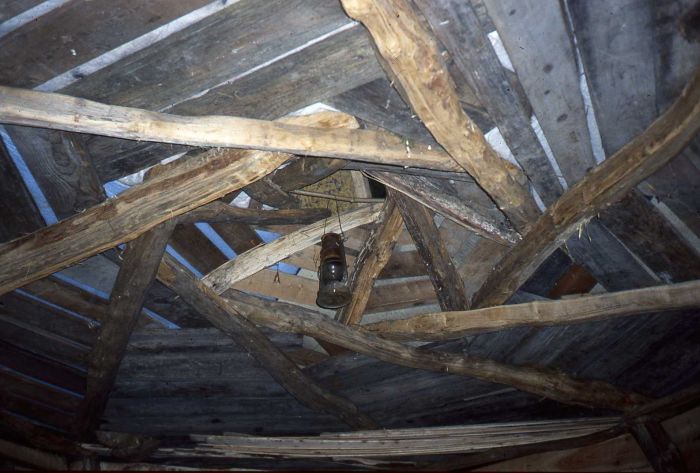 Enjoying the view from the sloped field and seeing the newly-planted orchard there provided a lot of insight into designing for slopes, working with gradients and so on.  The stroll back across the site, and the conversations on the walk had yielded a real appreciation of how the site’s designers had applied the permaculture principle of zoning.  Even the salad when we got home, and the explanation of what was in it (the leaves and flowers of 24 different plants) was an education.

But none of it had been formally taught.  No flipcharts, powerpoint slides, no teacher at the front of the classroom, no instructional videos or (heaven forbid) exams.  In part we had taught ourselves, in part Rod had very skilfully introduced us to ideas, engaged us in conversation, without our realising we were formally being taught anything.  That was a revelation.

The course continued in that vein, and included some great exercises and approaches that I went on to use in my teaching.  Here are 11 of my favourites:

That’s 11, although I’m sure there were many more.  If ever a course shifted my sense of how to do something, that was it.  Twelve years later I feel I’m still digesting the learnings from it.