Something very powerful feels to me like it is starting to move.  I see it in the victory of Syriza in Greece on a platform of localisation, resilience building and sustainability as an antidote to austerity.  I see it in the explosion of craft breweries, farmers markets, community energy companies and so on, in Scotland’s moratorium on gas fracking. I also saw it in the two days I just spent in Belgium supporting the great work of the regional Transition hub “Wallonia-Brussels” there.  The trip was also to support the Belgian release of the French language version of The Power of Just Doing Stuff (“Ils Changent le Monde”).

I arrived on Monday and went straight to a meeting of ministers from the Brussels regional government.  I talked about Transition, and we had, along with Belgian Transitioners, a really interesting conversation about how Transition and local authorities can work together.  This was followed by a quick supper prepared by Transition 1000Bxl and with a larger group of Transition folk from across the region, including some of the people who translated my book,  before heading off to the Tricoterie in Brussels, a beautiful venue for a talk.  Beautiful arched ceiling, chairs in a semi circle, and the organisers had even adorned the stage in front of where I was to speak with a potted cabbage plant!  That doesn’t happen every day. 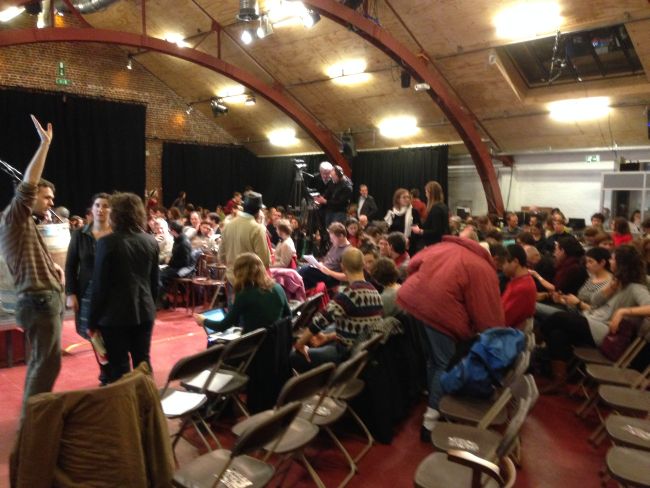 The event had sold out weeks ago, within just 3 days, and about 400 people packed the room.  The talk was also streamed live on the internet by Belgian TV station Rtbf, watched by many hundreds of people (around 1100 people “liked” on Facebook during my talk on the live webstreaming). 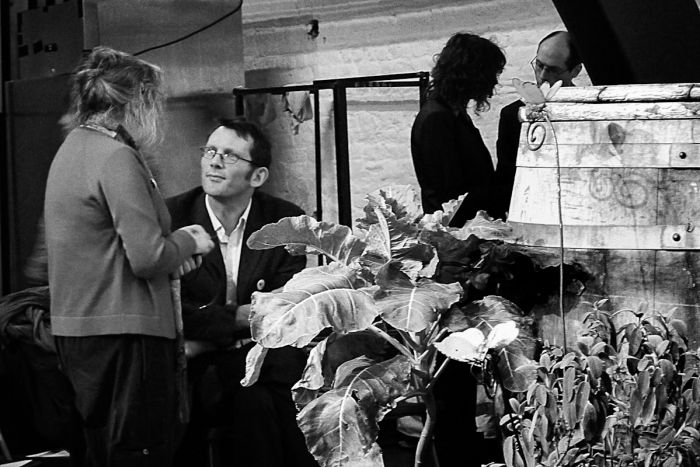 Brussels is a multi lingual event, so was co-hosted in French and Flemish, beautifully facilitated by Noemie (who spoke French) and Greet (who spoke Dutch).  The evening began with people pairing up to introduce themselves to each other, and a show of hands for how many people attending were from Transition groups or other similar projects. 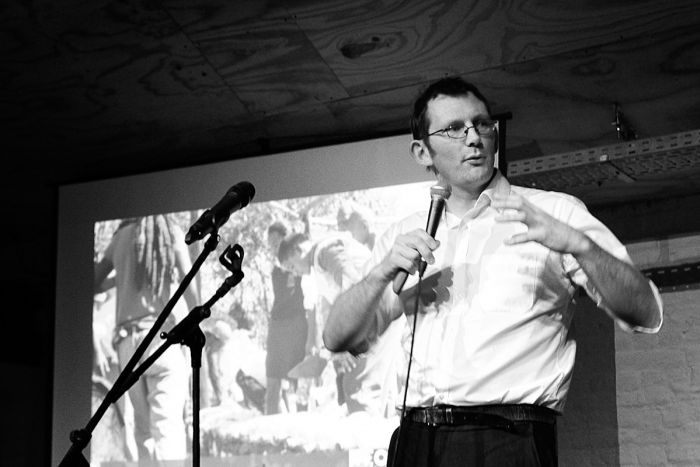 Then Olivier de Schutter, former UN Rapporteur on Food, gave an introduction setting the global context and welcoming me to Brussels.  I then spoke for about 40 minutes, a talk that featured a couple of fine Martin Luther King quotes (one quote from which, “the fierce urgency of now”, rather had the translators scratching their heads), slides whose content had mysteriously disappeared, and a very lovely and engaged audience.  There was lots of laughter and head-nodding.  You can find the (overdubbed in French) film of the talk here.   It has already been watched 1,140 times.

The Facebook page that accompanied the talk had many very complimentary comments left.  After I spoke, Josue Dusoulier from the Belgian Hub gave a short presentation about what is happening in Belgium as Transition catches fire across the country and new initiatives and projects pop up all over the place. 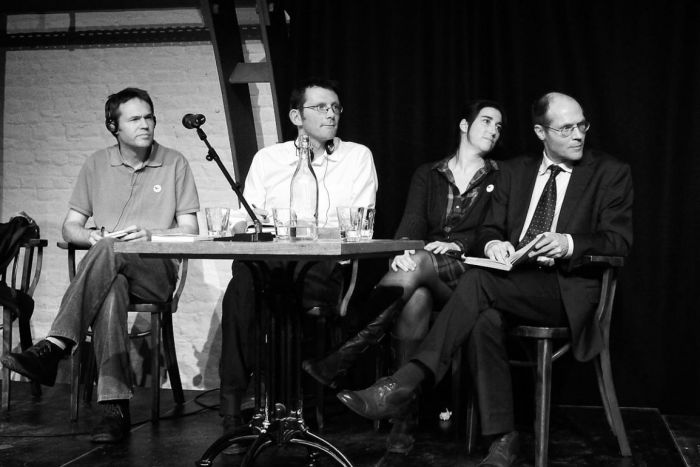 We then had a great Q&A, with a wide range of questions, and trialling the approach I borrowed from George Monbiot of saying that questions will be taken from the audience in the sequence of man/woman/man/woman (just the suggestion of it generated a round of applause). 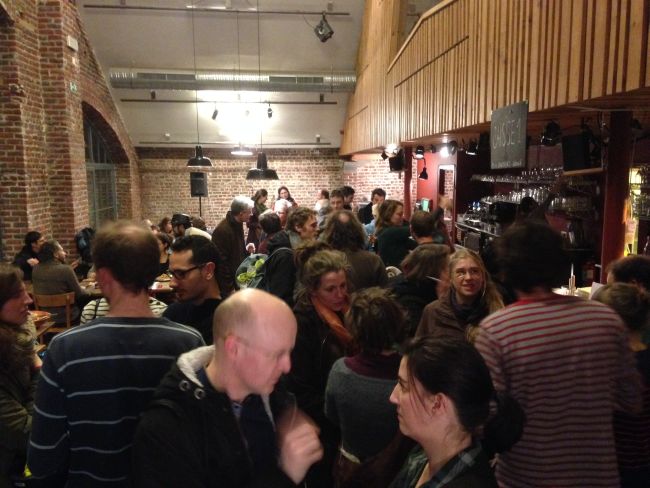 When the evening ended, I signed lots of books, met lots of lovely people, and sampled a couple of rather nice Belgian beers before heading off through the city to bed.  A lovely event.  Here’s how one Belgian blogger reported it.

Next morning I set off on the train with other representatives of the Hub to Grez.  Grez en Transition (GET for short) is one of the first Transition initiatives in Belgium, having kicked off in 2009. Here is a film about the group and its work:

The group has lots of projects underway, and exciting new ones planned.  They have an Incredible Edible project, they do skillshares, workshops on preserving food and wild food walks, a project to do with growing grains locally, and the place I visited first, Potager Graines de vie ( “Seeds of life”). 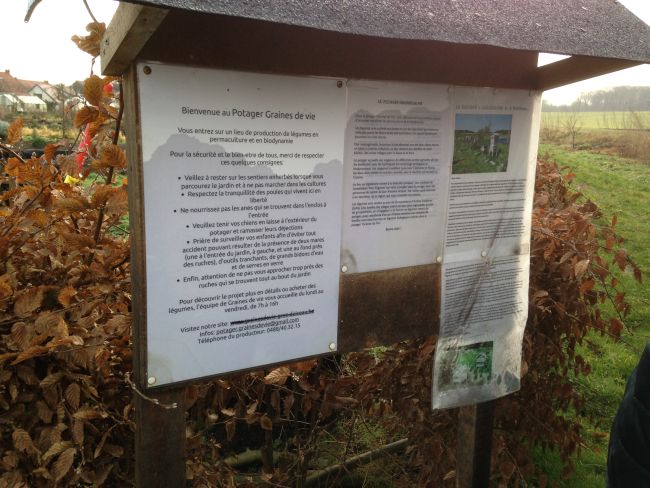 It’s a community supported agriculture scheme run along permaculture and biodynamic lines.  It supplies food for 100 local families for 8 months of the year.  Although clearly late January is possibly the least insightful time to visit a food garden, it was still fascinating to see.  The garden is laid out in concentric rings of raised beds, interspersed regularly with beds featuring perennial plantings which attract beneficial insects and increase the overall biodiversity.

The garden also has many beehives at the far end, and although the garden is largely surrounded by monoculture farms, honey yield has risen consistently since the garden started, a fact the head gardener, Herman Pirmez, put down to the biodiversity beds. 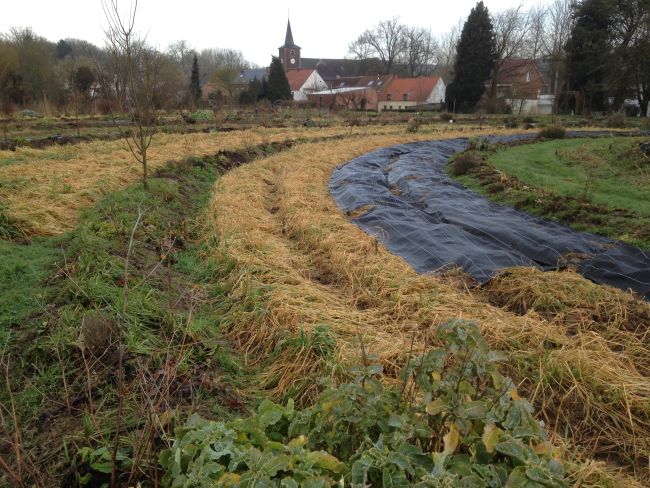 We toured the garden and then headed back to the house of the farmer on whose land the garden sits.  He is in the process of turning his 60 hectare farm into an agroforestry farm, with alley cropping and mixed tree varieties.  His observation was that being a farmer can be a very lonely life.  Since the creation of the garden and working with Grez en Transition, he now feels as though he is actually farming relationships, community and connection.  Sadly that’s the one key thing the Common Agricultural Policy is unable to subsidise. 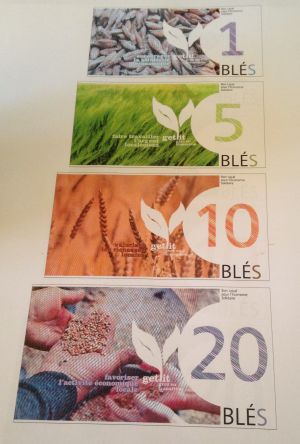 I was then given a presentation about the group’s future plans.  I heard how in 2012 the group felt it was running out of steam.  So around the time of the potato harvest, they held an event called the ‘Frites Party’, where people went out to the field to help harvest potatoes, and then washed them, chopped them and turned them into chips, eaten in the field.  Eric Luyckx said it was one of their most popular events that people still talk about to this day.  Helped to bring new people into the group, and now it seems to be buzzing.

I was also introduced to their fascinating Charter which governs how they work as a group and to help the local economy to transition, which I hope to get translated soon to post here.  We then shared a delicious pot luck lunch, and did an interview for an upcoming programme about Transition, before heading off to Namur. 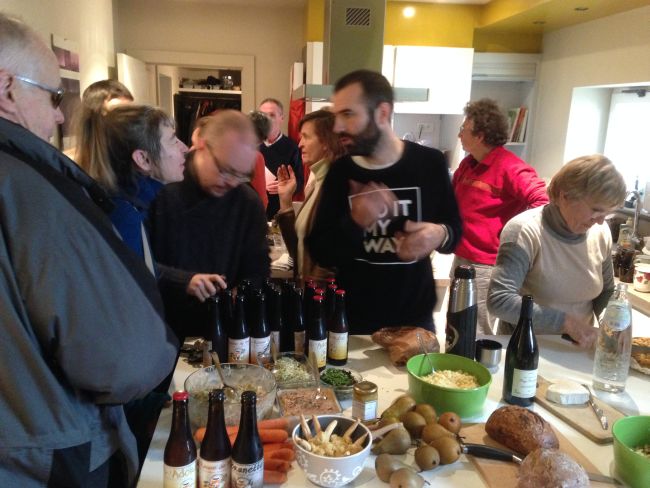 Namur is a city in Wallonia in the south of Belgium.  It was built where the rivers Sambre and Meuse meet, and it’s a French-speaking city.  It is also home to Namur University.  When we arrived we first had a meeting with the representatives of the Wallonia regional government, and then people from the University and other organisations, about how they might integrate Transition thinking into what they do. 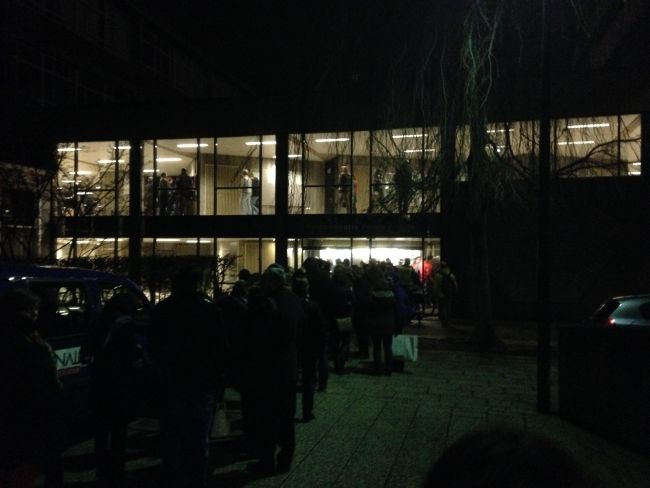 Lastly it was off to the University for the evening’s talk, which, like the Brussels talk, had sold out weeks ago in a matter of days.  When we arrived the queue stretched out of the building.  The hall, a much more conventional lecture theatre than the Brussels venue, was packed with 640 people.  The evening started with an introduction and formal welcome from Claire Lobet, Vice President of the Sustainable development department of the University.  Then Isabelle, from Soignies en transition, set out the evening, and invited everyone to introduce themselves to someone sat next to them. 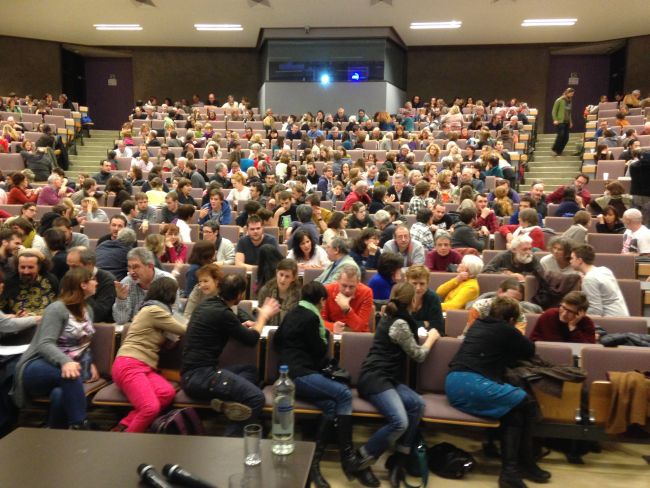 It’s quite a sight to sit and watch 640 people meeting new people at the same time.  I introduced myself to the woman behind me, who spoke little English and I spoke little French, so we attempted in fumbling Franglais until we discovered we both spoke Italian, at which point we were told time was up!

The talk then went well.  Unlike the Brussels talk which was translated into French and Dutch using headphones and translators, for this one I was joined on stage by Olivier Chaput, a member of the Belgian Hub, who translated beautifully.  Felt like being part of a double act.  A very enjoyable and celebratory night. 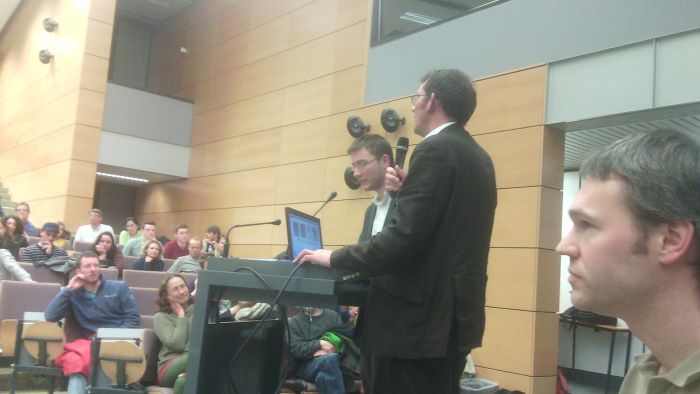 Because translating that way makes a talk longer, once we had finished and Josue had given his Belgian perspective, the evening was running perilously close to the time of the last train home.  There then followed an amazing self-organising lift share process, where in just a few minutes, everyone who was in danger of missing a train was paired up with someone with spaces in their car, and everyone could settle back and relax again.

We had a great Q&A session, wrapping up about 10.20pm.  Then lots of book signings, talking to people, the odd selfie, and an interview.  After a couple of beers, and meeting more people, we headed back to Brussels and within about 5 minutes of getting in the door I was fast asleep. 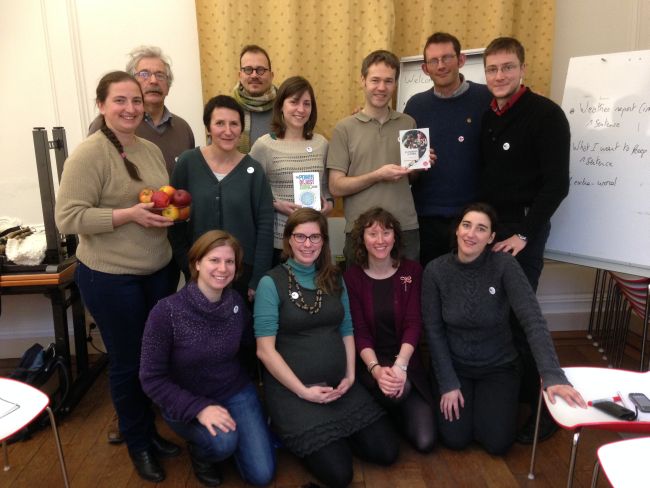 Next morning the trip drew to a close with a wrapping-up meeting with the regional Hub Wallonia Brussels folks, at their office in Brussels.  After a check in and some reflections on the trip, and what they might do to build on the increased profile and coverage, we all sat down to a fantastic early lunch, with cheeses from different regions across the country, great soup and good conversation.  As my leaving present, I was gifted so many different bottles of Belgian craft beer that Antonia, one of the hub’s team, had to gift me their wheelie shopping trolley thing in order to transport them home!  Thanks everyone.  They will last me about 4 months… 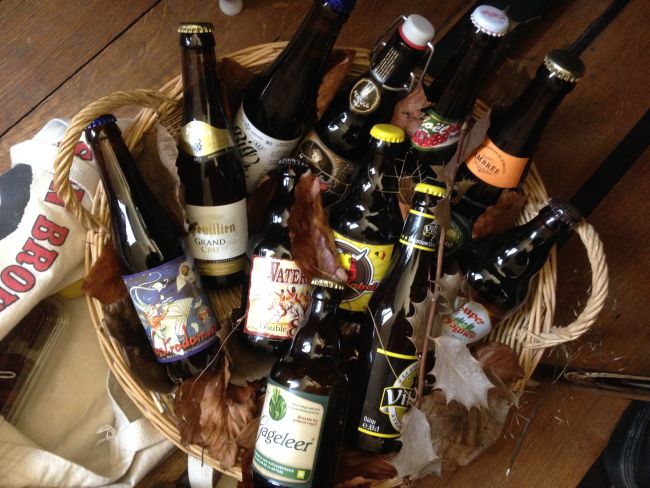 That was it then, off onto Eurostar and so on and so on, my beer bottles chinking gently behind me.  Although it had a programme so packed you couldn’t get a piece of paper between its different elements, with little time to take breath, it really felt like it gave things a new boost, built some useful new connections, fired some people up with possibilities.  My deepest thanks to everyone who made it such a delight and to the Transition Belgium gang for all their great organisation, and to whoever grew the fine cabbage plant that so beautifully adorned the stage in Brussels. And lastly to the wonderful team of translators who translated the book … here they all are: 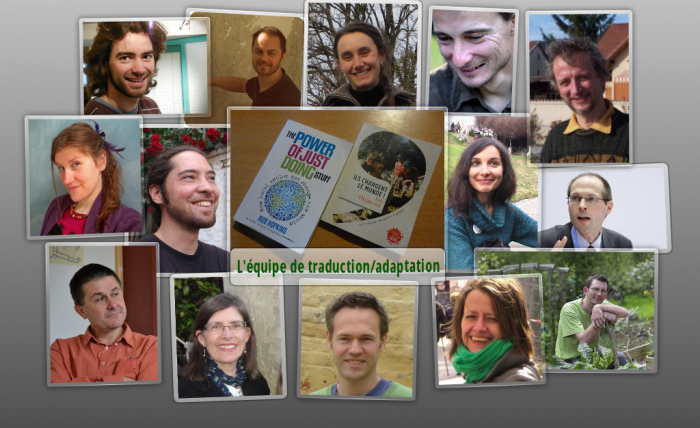