The film ‘Demain’ (‘Tomorrow’) is proving to be one of the most remarkable catalysts for Transition and other bottom-up approaches that has ever been made.  I recently saw it described by a friend of mine as “‘March of the Penguins’ for localists”.  Mention of it often pops up in emails from people who have seen it.  One recently said “Demain is working really well in France, it is a crazy phenomenon, never a documentary has touched so many people in France”.  Another friend rang me from outside the screening he had just taken his son to in Paris, so thrilled by it he had to call me straight away to say how wonderful it was.

The film, created by Cyril Dion and Melanie Laurent, was premiered in Paris during COP21, and has since been seen by 560,000 people in France alone.  It is now into the 6th week since its release, and this week has been the best week yet for the film, seeing a 29% increase in the number of people going to see it.  This week it is on in 293 cinemas in France (see the list here).  It is currently number 15 in the box office charts and has 103,000 followers on Facebook. 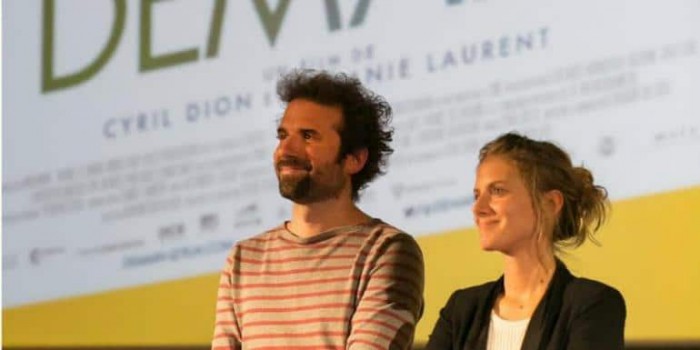 It has been nominated for a Cesar award (the French equivalent of the Oscars) for ‘Best Documentary’.  Cyril and Melanie have appeared on all manner of TV chat shows (such as the one below) and the level of media coverage has been amazing.  Its inspiring message has really hit a chord with people.  As Cyril told me, “we are receiving every day messages from people launching projects or using the movie to support current initiatives”.

A review in Le Monde said described the film as “a phenomenon of society”.  It added:

“In a France darkened by crisis and terrorism, this documentary is a ‘breath of hope’ … (it) presents the spectators with people who are not in the light, but who create, invent, and are preparing for the future. It takes them out of the impasse”.

Another, in La Vie, wrote that “this was a rare thing: the audience actually spoke to each other, before and after the movie!  Indeed, many of them were there for their second or third viewing of the film”.

It launched in Belgium a couple of weeks ago, and most of the screenings have sold out, with 13,000 people seeing it in its first week.  Screenings have proved a huge boost for Belgian Transition groups.  The Belgian equivalent of the Radio Times, their TV listings magazine, dedicated 7 pages to it, half of those to stories of what Transition groups are doing in Belgium.  The Belgian Hub, Réseau Transition, asked groups for their stories of the impact the film is having.  Here is what some of them said.  Elisabeth (Liz) Gruié wrote:

“I live in Liège and watching Demain crystallised my appetite to support the ‘green’ cause and more specifically to get involved into sustainable and local projects… I contacted the team at Liège en Transition to see where I could be involved. I bought two shares in Les Compagnons de la Terre and I am now part of their communication team. Finally I invested into a Cooperative Bank and will open an account there instead of going for the brick-and-mortar banks. I started to buy and use the local currency (‘Le Valeureux’) and as a future switch to renewable energies I am now looking into Enercop to replace my local provider.  So many changes indeed!”

Catherine Etterbeek wrote, “What strikes me is rather the impact on the people around me, who are external to the Transition”.  David from Etterbeek in Transition wrote, “overall I think it reinforced the image that I have with my relatives and acquaintances (who begin to consult me on some issues) and I think it will pay off in the long term!”

“We welcomed new members since the film’s release. We noticed such enthusiasm around us that we decided to organize an event around the ‘day after tomorrow. ” This is called “Tomorrow, I promise” and will take place at the end of the month. Difficult to assess the impact before that date, but we’re getting close to 100 participants on Facebook + some very positive feedback about the organization of this event. It’s been a while that we did not have noticed such enthusiasm. We therefore expect a coffee debate on five themes of the film and will explore new ways to offer people to engage effectively”.

UPDATE: Demain in Switzerland and beyond

Demain recently also launched in French-speaking Switzerland, where it is Number 2 at the box office, with 21,000 viewers so far and momentum growing all the time!  As of last week, total views of the film are 718,934!  Amazing.  The foreign rights for the film have also been sold now for Germany, Italy, Spain, Portugal, former Yugoslavia, Australia, New Zeland, Hong Kong and Macao, Japan, Morocco, Algeria, Colombia and South America. And most excitingly, on Friday 25th February 2016, it won Best Documentary at the Cesars in Paris (the French equivalent of the Oscars)!  Amazing.  And a huge boost to the film.  I suspect that we are going to see a lot more of Demain over the next few months. 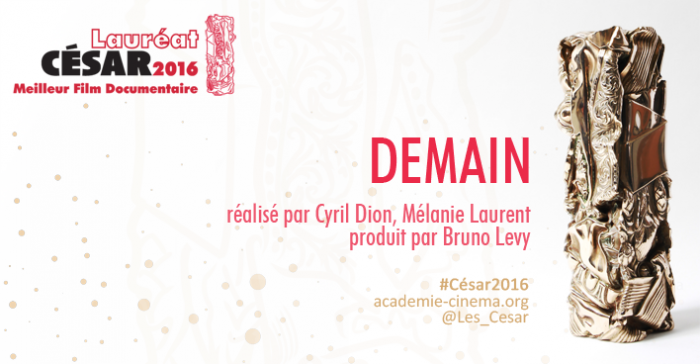